The warmth of another muggy summer’s day radiates into Pauline Curnier Jardin’s studio. Tucked away in a courtyard just off the Maybachufer, the muffled sounds of neighbouring construction and fellow residents filter through the open windows. We catch the artist in the midst of moving out, her supplies and work materials now lying scattered and piled in cardboard boxes, creating a slalom of sorts for us to navigate through. After weaving our way between each stack of cartons, we take a seat at a small table next to the window where she turns on a fan to catch a bit of respite from the heat. Over the course of the conversation, Curnier Jardin opens up to us about the influences, inspirations and cohort of strong women behind each of her films and large-scale installations. 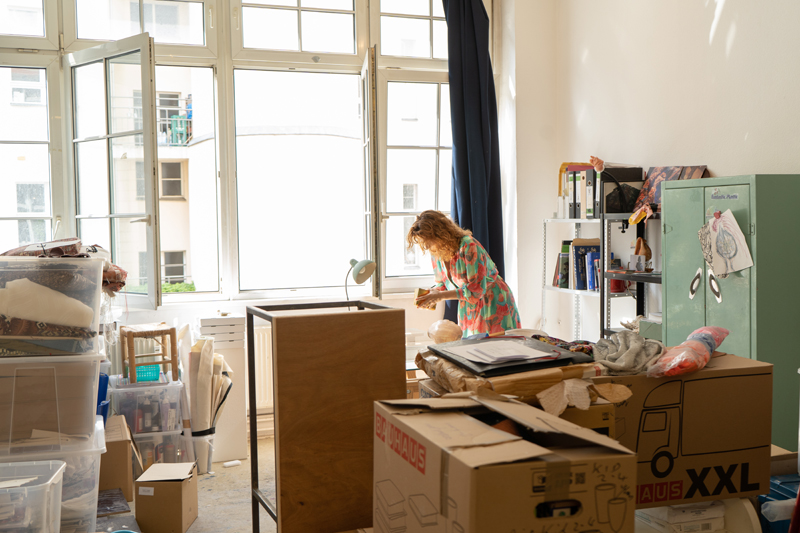 I am itching to hear more about the combination of trippy and early-19th century theatrical aesthetics I’d encountered at her recently closed show at ChertLüdde. Diving straight into the topic, the artist brings us back to the research she first conducted upon arriving in Berlin over ten years ago. Fascinated by contemporary European history as well as the history of Berlin’s women, the Weimar Republic, with its extremely transgressive spirit for the time, was a natural place to begin. The interwar period was marked by a peak in entertainment and liberation, both politically and sexually speaking. The women of that time became a key inspiration for the large-scale sculptural installation.

Indeed, ‘Luna Kino’ (2022)—where a larger-than-life sculpture of a woman, partially submerged in a viscous dark, white-flecked substance, legs spread and mouth gasping, greets the visitor—personifies the subversive, emboldened spirit of that time. Taking its name from Berlin’s Luna Park—an amusement park running from 1909 to 1933 in the Halensee district—and the predominantly woman-run cinemas of the period, the title of the show glows over the entrance of the dome-like structure that welcomes you into the show. At the back of the room, a projection of blood trickles down a sheet hung up on a washing line, while the sounds from an antique loudspeaker project across the room. An amusement park soundscape and the melody of ‘Bau auf, bau auf’ (Reinhold Limberg, 1951) blend into the space, bringing you closer into a time where the country was in a process of reimagining and rebuilding itself. 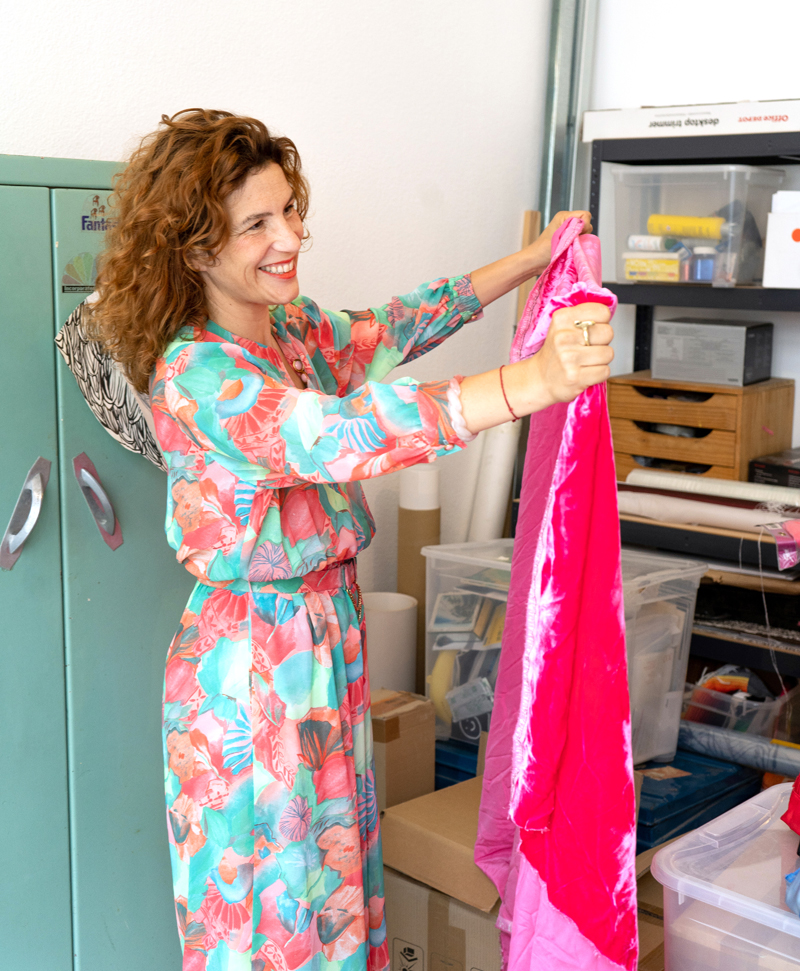 While the Weimar influence feeds into the sexier side of the show, the post-WWII years have also been of tremendous importance to Curnier Jardin. She explains to us the red thread of female characters running through her work. In the case of ‘Luna Kino,’ the so-called “Trümmerfrauen”—women who helped clear the streets of Germany and Austria after World War II—feature at the entrance to the show. Their presence is a commemoration of the resourcefulness and resilience of the women who played such a large role in rebuilding the war torn countries, as well as a testament to the fraught road leading toward greater female autonomy.

Returning to the partially submerged central figure of the exhibition, we see her drowning in the milky-way night, facing a white sheet onto which dripping blood is projected. Among other things, the piece alludes to the less frequently told histories of the Trümmerfrauen. In her harrowing 1959 memoir ‘Eine Frau in Berlin,’ journalist Marta Hiller recounts the experience of sexual violence in the last days of the war, an experience all too common for women of the time. Yet the figure also has a dual identity, one informed by Curnier Jardin’s interest in female experience as such. She also embodies the moon suspended in the cosmos thus forming an esoteric reference towards women and the lunar cycle. The theme of blood, most notably menstrual blood, is underscored in many of the artist’s works as well as in our later conversation in her studio. The female figure in ‘Luna Kino,’ with her legs spread in the direction of the dripping blood, hints at a shared experience of femininity connected not just by tragedy, but through the material of the universe itself. 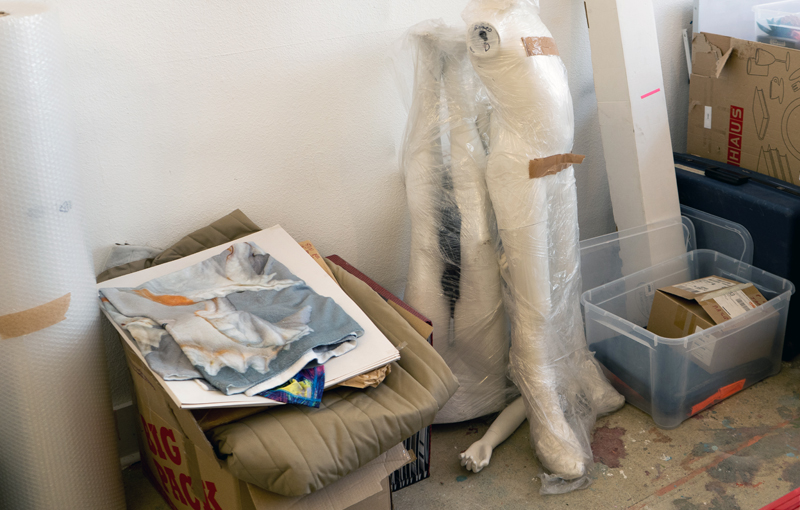 Though her work is now mostly packed in boxes, elements of the theatricality and mystery so characteristic of her practice can still be seen. My attention is repeatedly caught by the bits and bobs that surround us. Sticking out of boxes, I notice everything from sequined fabrics to banana rattles, fake cigarettes to mannequins with missing limbs. One of her biggest inspirations, Curnier Jardin explains, is trips to the market or the one-euro store. As many can confirm, the randomness that accompanies these settings goes unrivalled, with every visit resulting in unique discoveries. The miscellaneous items surrounding us are a testament to this. Despite what she describes as an almost “anarchist” way of arranging things together, links between disparate things are still possible. Each item is like a character in a story—connections can be made and stories unfold almost on their own.

At the same time a certain melancholy weighs on us as we mosey between the moving boxes. Like many artists in Berlin, Curnier Jardin is not leaving of her own accord, and the way she deals with the situation is testament to her particular resilience. She is being evicted as a result of the building being sold to investors, this time from Luxemburg. This is an endemic problem in a city that was once a capital of culture. Artists struggle to survive as investors buy up studio spaces, raising rents to extortionate prices or kick out tenants altogether. This is not to mention the proliferation of this problem brought about by the pandemic. One statistic shows that the city of Berlin has only been able to offer 282 new affordable, subsidised studios since 2017—while around 350 are lost every year. The situation in the private market, the whims of which have now affected Curnier Jardin, can be even more dire. 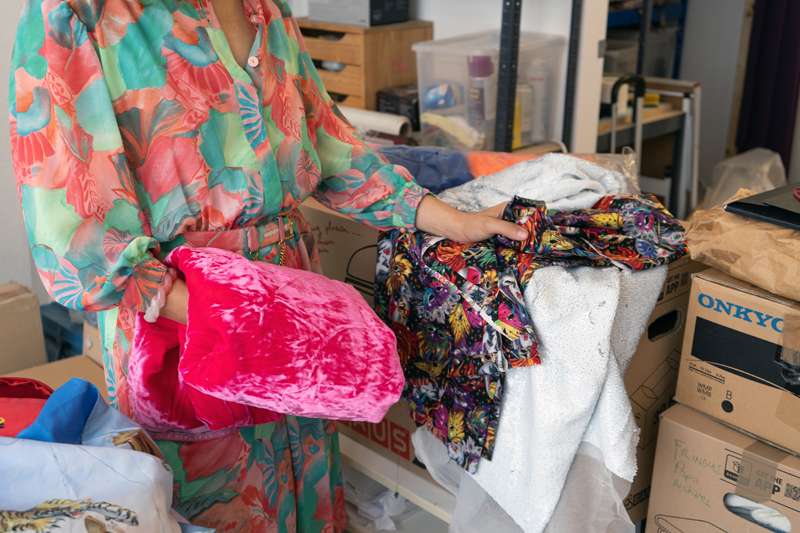 While it’s difficult to imagine the artist developing an immersive experience like ‘Luna Kino’ cramped between all the moving boxes, it’s both fascinating and admirable to see where the early stages take place. Taking ‘Fat to Ashes’ (2021) as an example—an enormous amphitheatre-like structure that filled the height of the Hamburger Bahnhof’s main hall—Curnier Jardin explains how she would create the small scale models at her studio. “I hate working on the computer” she tells us, opting rather to draw and make her small sketches by hand. When asked if her large-scale sculptures hold a close resemblance to her models, she begins to chuckle. “It always leads to surprises,” she replies.

Before we leave, Curnier Jardin treats us to a sneak preview of an upcoming group show in which she will be taking part: ‘Ceremony (Burial of an Undead World)’ at Haus der Kulturen der Welt. Set to open on October 22, the show will be a take on the traditional Napolitan nativity set. Living and working between Berlin and Rome, her work now includes anthropological research into the south of Italy. The nativity will not centre around the well-known Catholic narrative. Instead the figures will be linked to death and birth—an “anti-nativity” of sorts. Returning to her interest in the history of women, three female characters—based on those both dead and alive—will feature as her protagonists and prompt a discourse surrounding the different methods and approaches to childbearing. 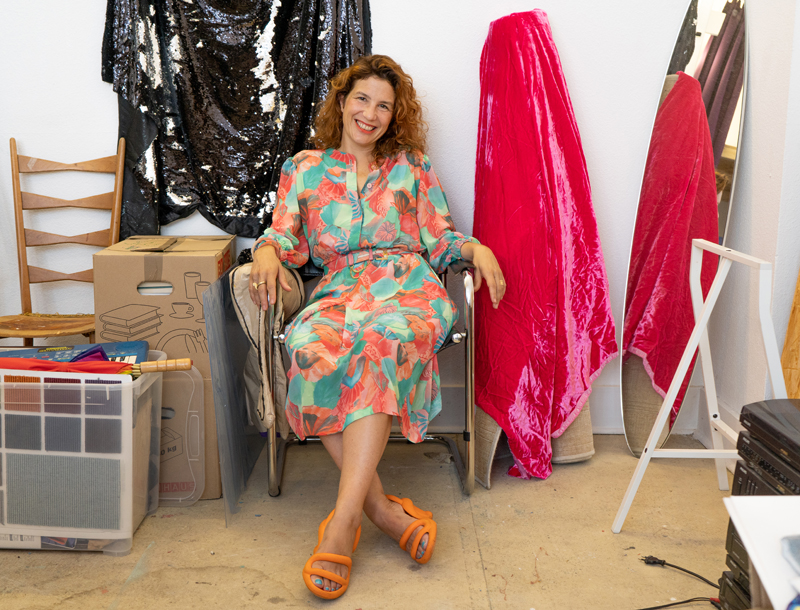 Most noteworthy of Curnier Jardin’s work is the recognition she grants to women and to the experience of womanhood across the ages, not to mention, as evidenced in many of her works, to women of all ages. In doing so she brings to light marginalised histories, unspoken experiences, all the while subverting typical narratives of womanhood. The passion and admiration she has for these women drives her conceptual approach as well as her aesthetics, and forms a didactic point of interest at the intersection of history and contemporary art.