To what extent can technology mimic reality? British media artist Ed Atkins explores this very question in his solo exhibition at Galerie Isabella Bortolozzi. The exhibition takes you on a journey of different manifestations of technological realism. The journey is chronological, from realistic pencil drawings of a foot and shoe to sound installation then jumps to media and video containing computer-generated avatars. The show’s highlights are two video pieces, ‘The worm’ (2021) and ‘Voilà la vérité’ (2022), emblematic of Atkins’ hyper realistic computer generated worlds centered around both the content and the avatar protagonists. 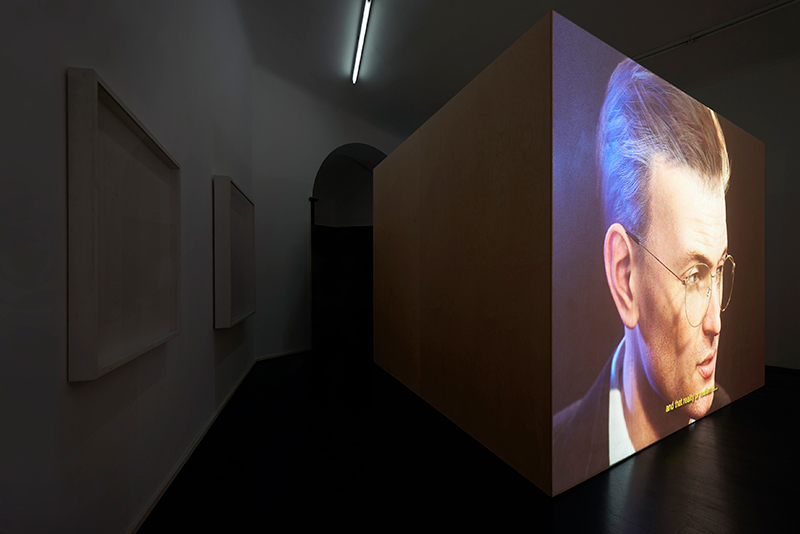 Upon entering the gallery in the room immediately to the left, you are faced with the interior of a giant, hollow wooden box flipped on its side. The almost architectural structure takes up most of the relatively small space. The first video piece, ‘The worm’(2021), is projected onto the back face of this wooden box-like structure, which is positioned at barely two meters from the room’s back wall leaving little space for the visitor to sit. The cramped distance between the video and the opposite wall immediately makes the experience an up close and personal encounter with a computer-generated animation of Atkins. The content consists of a phone call exchange between the artist and his mother. The mother is not seen, just heard. The scene depicted on the projection is strange. Through the choice of chair and table, it directly references the British playwright Dennis Potter’s last televised interview, which was a painstakingly personal look into Potter’s confrontation with terminal cancer, reflections on life, death and politics. During the interview, Potter delivers a profound, unapologetic, and almost uncomfortable performance as he shifts in his seat, pausing occasionally to take a swig of liquid morphine, which he, along with cigarettes, black coffee and a glass of champagne, used to get through the evening. Atkins’ reference to the interview prepares the viewer for the artist’s own uneasy intimate encounter with his mother’s blunt emotional disclosure and evokes the specter of his father, who also died from cancer.

Layers of contradictions are the driving force of this piece. Firstly, the choice of a T.V. interview already sets the tone of fluctuation between real and staged. The “host” is a hyper-realistic avatar who personifies Atkins and is dressed in a suit with slicked-back hair and glasses. The video starts with a sort of inner monologue, “Yeah, yeah, yep, cool, alright, please work.” All of a sudden, it is interrupted when his mom connects to the line. They proceed to have a conversation. Mostly we witness Ed Atkins, the avatar, reacting as his mother speaks: through a laugh, a wince, a frown. He only rarely interjects with a question or if he finds something surprising. 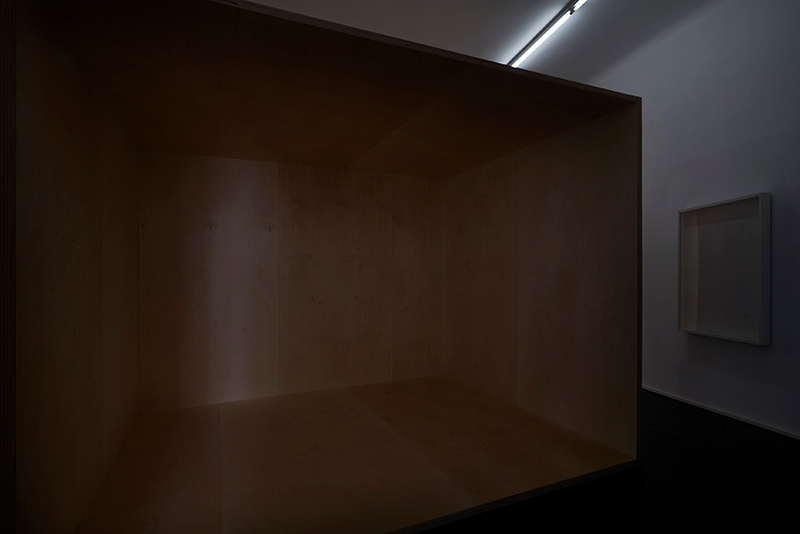 As his mother continues, the video cuts abruptly. The camera zooms in and out, blurs and focuses. The avatar is squirming, squinting, twitching, and fidgeting—communicating the uneasy feeling anyone would have talking to a parent about emotional vulnerabilities. The technological glitches of the avatar match the emotional ones; in the video, the glitches are not an indicator of malfunction but rather add to the hyper-realism, a break in the artifice in the way that they mirror realities’ glitches. Atkins, through computer generation, captures and magnifies the usually uncontrollable and unconscious twitches that we all have. His mother recounts stories of her childhood and her unstable mother, Atkin’s grandmother, and how they may have impacted the depression she feels now. Finally, she asks Atkins whether she has passed this down to him. “Reality and realism is sad,” he says. “Yeah, a worm,” his mother responds. The word immediately brings to mind a computer worm, a malicious software program that replicates itself to spread through networks to other computers. 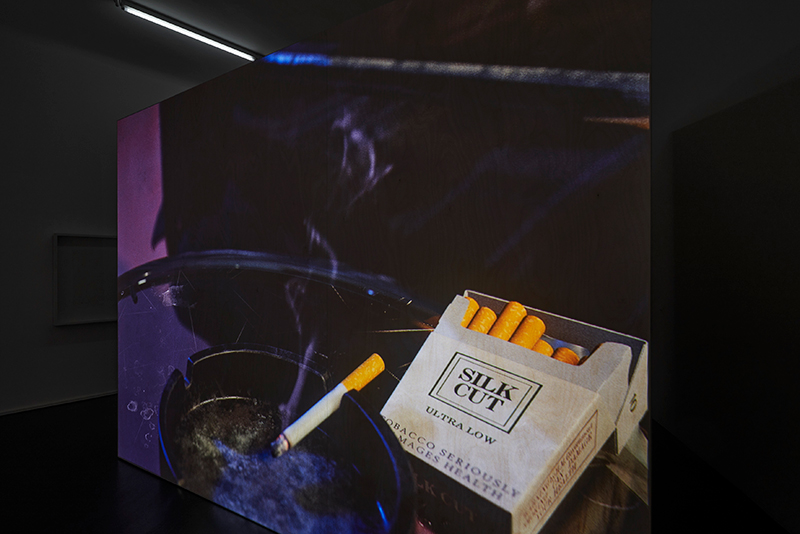 Seeing the work feels almost like sitting in on someone’s therapy session; it feels invasive, intimate and uncomfortable. The mother-and-son audio exchange brings the viewer into a private space, yet the visual image of Atkins as a host on stage is public. This juxtaposition and blurring between private and public, technological and human, serves as a reminder that we all project ourselves digitally nowadays, whether it is through posting on social media, or unwittingly through our mere online presence. This relatively new platform has essentially made privacy a scarcity.

Down a long hallway, the second video piece, ‘Voilà la vérité’ (2022) is very different in content yet raises similar questions. It is the reworking of a single scene from the 1926 silent film ‘Menilmontant.’ The scene depicts a forlorn woman sitting on a park bench in the cold when suddenly a man sits beside her and starts to eat bread and cuts slices of sausage. The woman casts surreptitious glances in his direction, looks away nervously, the fog of her increasingly labored breathing accentuates the cold. Without looking at the woman and without saying a word, he begins to share his lunch with her by sliding over a piece of bread. She first ignores the gesture as tears well up in her eyes when she begins to eat, she cries openly in reaction to his kindness. This sequence repeats in a loop. For Atkins’ version a new soundtrack was recorded by Berlin-based sound artist David Kamp, and two voice actors, Ricka Rothstein and Hector Miguel Santana provided the subtle yet important sounds of eating, crying and sighing. The film itself has been digitized and colorized using artificial intelligence software techniques. 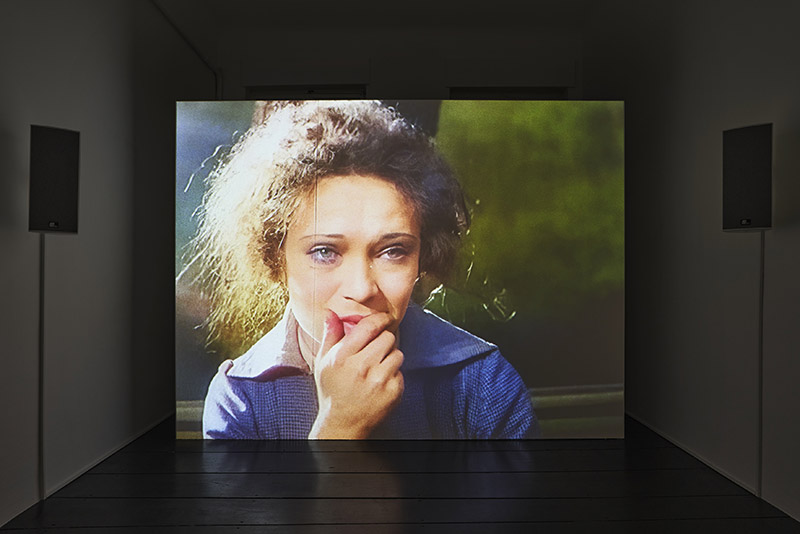 In ‘Voilà la vérité’ Atkins chooses another personal, very human interaction—one of generosity, empathy, and raw emotion. In this case, Atkins has used digital and AI technology to bring an old film into a colorized artificial realm. The viewer is presented with raw emotion, though its coloring, usually intended to endow a scene with more reality, appears artificial. A comparison between the original film and Atkins’ adaptation is inevitable. Which is more realistic: the grainy, black and white from the original or the hyper-realistic colorized reincarnated version?

Atkins’ work raises many ontological questions through his computer-generated or augmented worlds that oscillate between human and digital. Is Atkins attempting to “humanize” technology, or rather point to the now blurred lines separating the human and the digital to allude to a sort of post-humanist existence? Can we express reality through technology in the first place? The exhibition is captivating in its dialectical nature and leaves one to ponder the relationship between humanity and its most powerful invention—technology.