How can collaboration between the commercial world and First Nations be productive? Designer and founder of the National Aboriginal Design Agency in Australia, Alison Page, has been working for over 20 years to answer this question. With partner Sage Appliances, Page recently unveiled the ‘Aboriginal Culinary Journey’—a collection of kitchen appliances, like toasters and juicers, hand-painted by Aboriginal artists and later reproduced as a limited series through a new 3D-scanning technology that can even record the texture of the pieces. The painted surfaces are then made into decals that are applied by hand to the machines in the collection. At first glance the idea might seem to perpetuate old forms of colonial appropriation. Page warns that such knee jerk judgments ignore the many thousand-year-old Aboriginal practice of embedding everyday objects with stories. To relegate First Nations peoples to some imagined vision of nature is in itself a colonial prejudice. What matters, she notes, is the way in which collaboration is structured and the long-term benefits that working with indigenous artists and designers can bring. 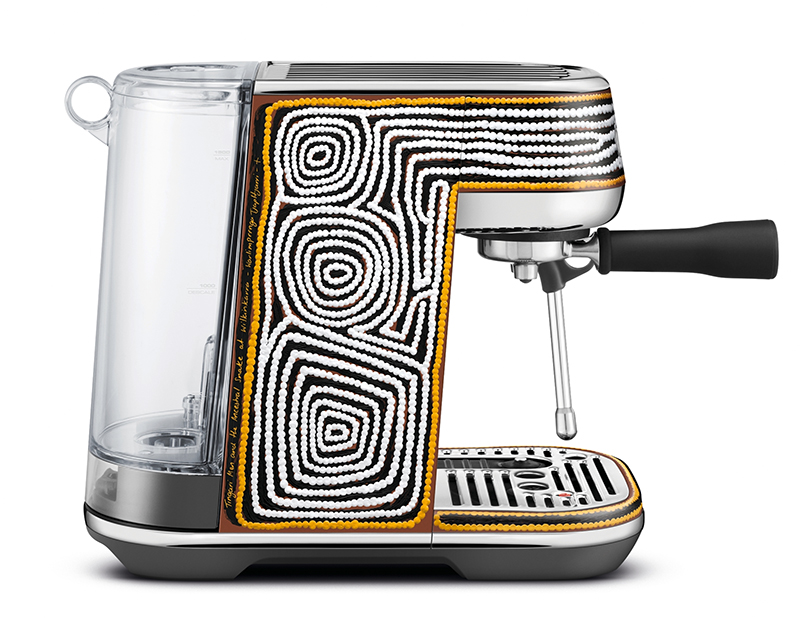 100% of the profits of the ‘Aboriginal Culinary Journey’ go to three charities—the National Indigenous Culinary Institute, the Indi-Kidi Program from the Moriarty Foundation, as well as for the creation of scholarships for Indigenous students at the University of Technology in Sydney, at which Page herself is an Associate Dean and is starting an Indigenous Design School. Additionally, Sage partnered with Dr Terri Janke, a Wuthathi/Meriam woman and an international authority on Indigenous Cultural and Intellectual Property, who is known for innovating pathways between the non-Indigenous business sector and Indigenous people in business. The agreement Dr Janke created for the artists ensured that they retained the copyright for their work, exclusively licenced to Sage, and received a guaranteed royalty for each product produced with license payments made quarterly. Their original painted works can now be seen in the collection of the National Museum of Australia. Sitting in her kitchen in Australia, Alison Page took the time to talk to us over zoom about how she believes industry is changing and what Aboriginal design can offer the world.

Berlin Art Link: Was your interest in design driven by your culture from the very start?

Alison Page: I’m from La Perouse, a very urban Aboriginal community located where modern day Sydney now is. Because I grew up in a poor household, I had, by necessity, a strong interest in interior design. I was always trying to fix up the house! It wasn’t until my last year in university, however, that a lecturer introduced me to the idea of Aboriginal architecture. My life changed from that moment on. Just putting those two words together — Aboriginal and Architecture — came to inform the questions I have been grappling with for the last 20 years: how can traditional knowledges and first nations principles inform contemporary design and other industries that have been developed by a colonial mind set?

The design principle that I think First Nations people have to offer the world is the principle of storytelling, including stories about sustainability and traditional knowledges, inviting people to have ceremonial moments in their experience of design. Storytelling is so important to Aboriginal people because we didn’t have the written word. Aboriginal people recorded the vast amounts of ecological and cultural data that they needed to survive by embedding it into stories and then in turn embedding those stories into Country—the land, the sea and sky, the animals and plants. Stories are told, or sung, through “songlines,” which compose a mnemonic system. They are a web of threads connecting us to Country. They also connect the different things that surround us to each other. 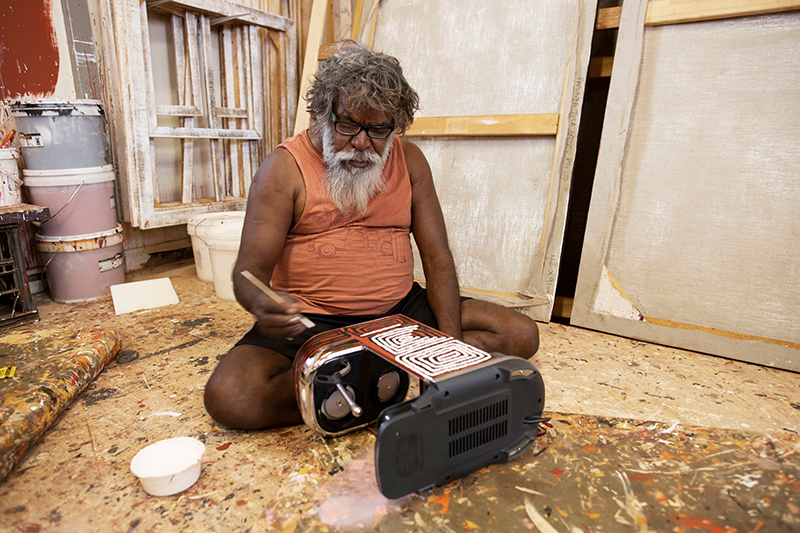 BAL: What is the challenge of working in a capitalist consumer environment and combining that with traditional Aboriginal knowledge?

AP: We wanted to make this project a tonic to all of the sickness of previously exploitative corporate projects, like the Chanel boomerang for example. The difference, however, is not just in the object itself, but how it is produced.

But first, it is important to remember that the built environment is also a part of Country. Where once we might have walked across a river, we now cross a city street. We use these opportunities to tell our stories and keep our mnemonic. Aboriginal people went from painting on sand and in caves to painting on canvas—which was a construct—and they moved to that quite easily. Today there are a lot of people who paint on car doors or discarded objects. Every surface is an opportunity to record the library of the Dreaming. 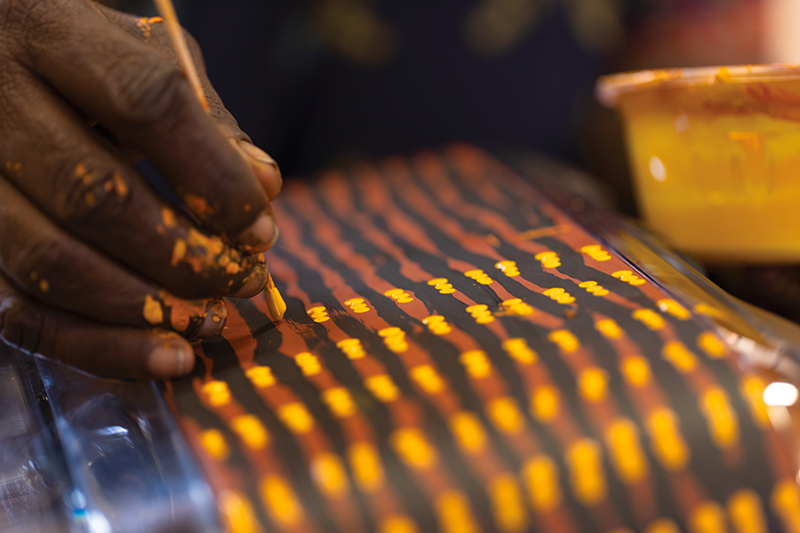 BAL: What happens when these products of mass consumption are exported to other places where people do now know these stories?

AP: I think the problem is that the world sees a difference between art and design, whereas Aboriginal people don’t. We have always etched and carved stories into everyday objects. In regards to the ‘Aboriginal Culinary Journey,’ I would say we should feel compelled to tell Aboriginal stories about the climate, about family, about ceremony, and put them into everyone’s homes. One of our tasks is to amplify our songlines.

BAL: How did the idea with Sage start?

AP: The idea started 16 years ago when I met the Director of Innovation and Design at Sage at a wedding and I told him my idea. But the timing was not right. Three years ago he rang me up and said he wanted to pick up on that conversation. Sage was rightfully nervous about the project because they did not want to appropriate indigenous culture. They are an Australian company that wanted to use their global platform as a voice for these important stories. If you don’t allow those voices to be heard in a commercial context, then when are they ever going to be heard? This is the language of the modern world and this is the power of good design.

BAL: Did the artists choose which appliance they wanted to paint on?

AP: We invited all 200 people in the community for a group breakfast. They all had the opportunity to try out these different machines. Immediately Yalti Napangati took the juicer and said, “this is a medicine machine.” So she painted ‘Kampurarrpa dreaming at Ngami,’ a depiction of a desert raisin, which is a food source but also a medicinal plant. She also liked the kettle, because she related it to the Piruwa tea that they drink in the desert.

Three of the artists are from the Pintupi 9. These are the people who walked out of the desert in 1984 and saw white man for the first time. They are from a community about 800 km west of Alice Springs, Australia’s most remote community. Today, all three, particularly Warlimpirrnga Tjapaltjarri and Yukultji Napangati are internationally celebrated artists. 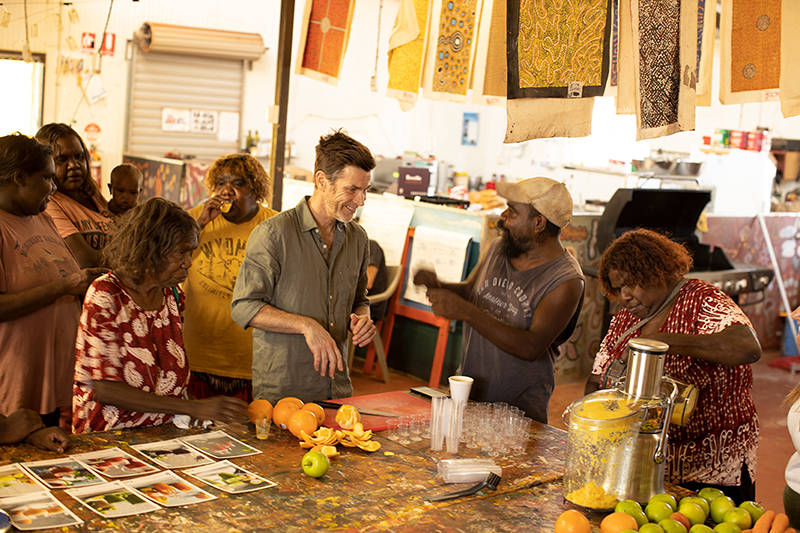 BAL: How do you think this experience has changed Sage?

AP: This project has totally taken Sage on a journey of cultural awareness. They have set up relationships with the traditional owners of the land where there headquarters are, which happens to be in La Perouse where I am from. They are using their leadership role to champion storytelling as a design principle.

BAL: How do you think Aboriginal stories can change the language of commercialism, which is generally exploitative?

AP: Aboriginal knowledge is already changing how industry works. For example, we have a recent policy in New South Wales, where developers need to demonstrate that they are embedding Country in new projects.

Projects have to be done through genuine partnerships and relationships. You can’t just slap a bit of Aboriginal art on something and call it the same thing as what we’ve done here at Sage. It took a lot of trust from Sage’s point of view as well. They are investing a lot of money in it without knowing if the project will stop after it is 75% done. It is also scary for Aboriginal people. Will they get exploited? I think this type trust changes people and it changes companies.