‘PARLA_MUTE,’ the current show by Angolan artist Yonamine at Michael Janssen Gallery in Berlin, confronts the viewer with an inversion. Stepping into the gallery space hidden from the street by way of a building and a courtyard, one finds oneself, again, back on the street. The walls and floors of the exhibition space are plastered with posters and stencils, many torn and overwritten. But this is more than the quotidian erosion of urban life. Symbols of Western value (fashion ads, the Eurovision song contest logo) are deliberately juxtaposed with slogans (“The Beautyful Ones are Not Yet Born,” “It’s Expensive to be Poor”) and images of street protest in Africa, all ripped and layered in ways that undermine their figurative and conceptual weight. The evidence of this artistic labor, undertaken in the gallery in the weeks leading up to the show, is also present, transforming the private exhibition space not only into a public street, but an artist’s studio.

We spoke with Yonamine from his home in Athens, Greece about ‘PARLA_MUTE,’ and art in the gallery, studio, and the street. 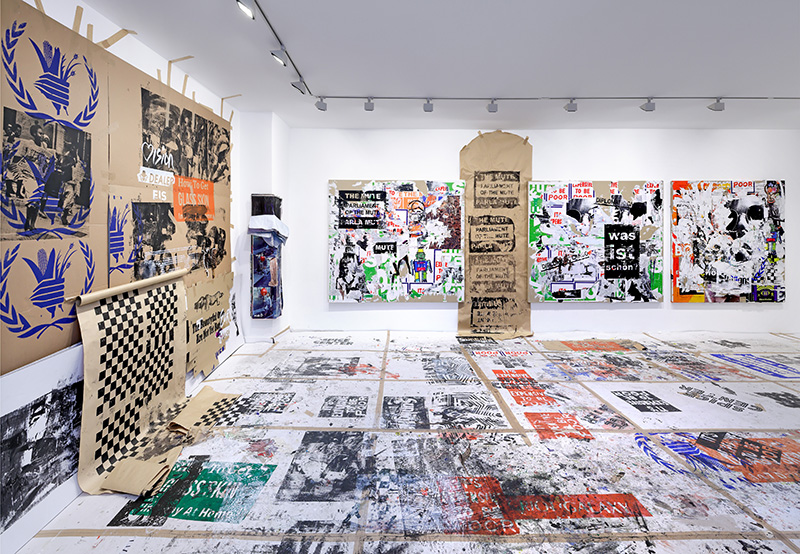 Matteo Calla: What’s the relationship between the show and its gallery setting?

Yonamine: The concept and language of my work, regardless of the space, is generally the same. I can change the media a little bit, but the language is the same.

I come from Angola. Free speech in my country does not really exist. It’s kind of a fake democracy. The time I was starting to prepare the show was exactly the time of the election in my country. There was a lot of corruption. People stole votes. And nobody was talking. My idea to bring ‘PARLA_MUTE’ to Michael Janssen Gallery in Berlin was the same as if I brought ‘PARLA_MUTE’ to my country, to Luanda, to New York, to Lisbon. I only want to bring the spirit of where I’m coming from. I thought the show was a great opportunity to make a mess, a mess inside the gallery. I didn’t initially intend to leave the floor messy, as if in a studio, but the gallery director loved the floor and asked me if I wanted to take it out or leave it like that. I said I was thinking about it and she said she loved the idea.

MC: ‘PARLA_MUTE’ doesn’t just bring the studio to the gallery, but also the street itself.

One of the posters in the show, “It’s Expensive to be Poor,” I started putting up on Warschauer Straße and some hot points in Berlin where a lot of people cross. This type of double conversation is interesting for me. The type of public I have on the street is not the same type of public I have in the gallery. 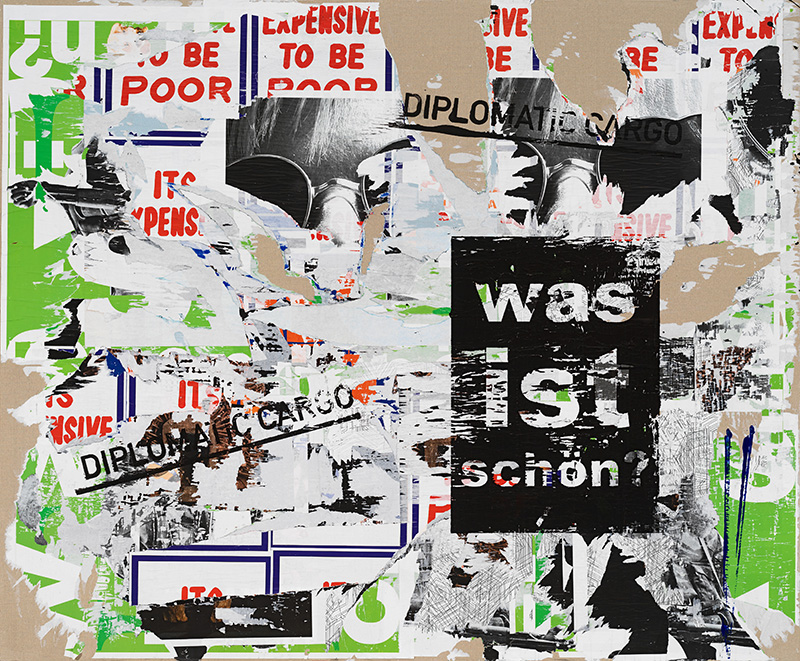 MC: Through collage, the show presents a number of voices that are not your own, such as the quote from James Baldwin, “It’s Expensive to be Poor.” Tell me about the presence of these voices.

Y: I was traveling to Zimbabwe. Life in Zimbabwe was and remains very tough. The population doesn’t have work. When some people don’t have work or things to do, they make small posters writing their occupation and telephone number, and they put these on trees. This caught my attention. So I called an artist friend of mine, Pratchaya Phinthong, from Thailand to come to my studio in Zimbabwe. And we started brainstorming about the posters. And then the idea was to do something on the street, to bring something back to the street. And in conversation with another Zimbabwean inside the car, one of them was talking about how tough life is in Zimbabwe, how hard it is to be Zimbabwean. And when the conversation was finished, he said in Zimbabwean, “It’s expensive to be poor.” And that guy doesn’t know James Baldwin! That is a very beautiful thing about the world, you know, how other people can feel the same things in different countries so far away. I never love to bring that thing into the concept. You know, “I read that book. I know James Baldwin and James Baldwin is the guy, and blah blah blah.” This is completely outside of that. It’s closer to the reality. 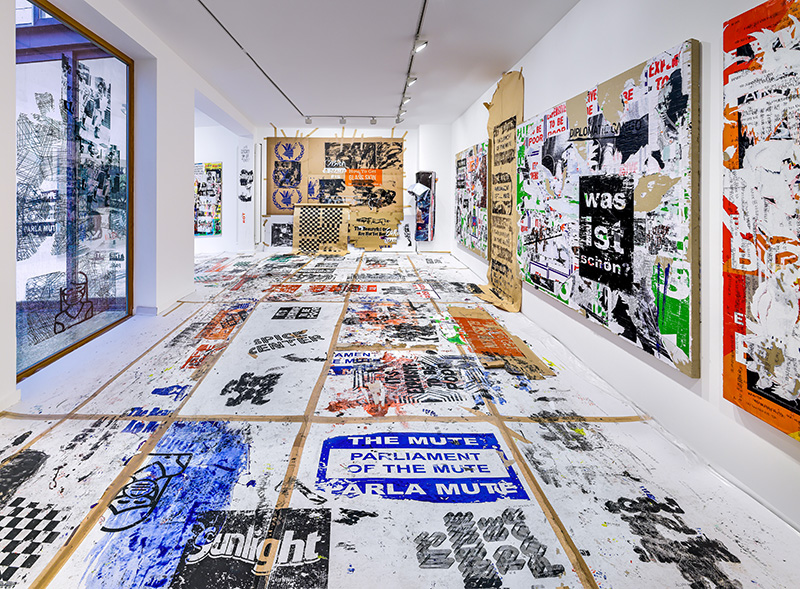 MC: Can you speak more about the kind of political critique that’s in the show?

Y: The same way African power is manipulated, European parliament, or Europeans, are manipulated too. Except one is more dirty and the other is more clean, but in the end it’s the same. I use it to tell how hypocritical the politics are not only in Europe, but around the world. It’s all the same. Europe, to survive, needs to exploit Africans and African leaders need to exploit Africans to survive. They don’t have nobody else to exploit! It’s a kind of decadence thing, you know? This is a chaotic idea of a society, and that’s what I’m trying to show with this collage.