‘Entropia, Volume I and II,’ published by Abstract Supply, is a two-volume collection of William Kherbek’s art writing from the past decade. The first volume presents a selection of reviews published in small, online journals which are threatened with—if they have not already met—oblivion, wiping both Kherbek’s criticism and the record of the artists’ shows from the internet. But the project is not merely archival: the second volume of ‘Entropia’ was authored in collaboration with GPT-2, an OpenAI-created large language model (aka text-generating “artificial intelligence”). A large language model like GPT-2 (or the more recent GPT-3) is a machine-learning model trained on a corpus of text that can be “prompted” by a user to generate passages of text that mimic the style and content of the training data. For Entropia’s second volume, the GPT-2 model was trained on Kherbek’s texts in Volume I, and prompted by Abstract Supply’s Jack Clarke and Kherbek with short text strings (specified as “seeds” in the published text) resulting in hallucinatory and hilarious art(ificial) criticism. In a conversation that took place in Berlin’s workers’ club, Trust, Kherbek and I focussed on the contents of the second volume and the wide-ranging implications for art and art criticism—both absurd and deeply serious—introduced by our machine collaborators and their corporate developers. 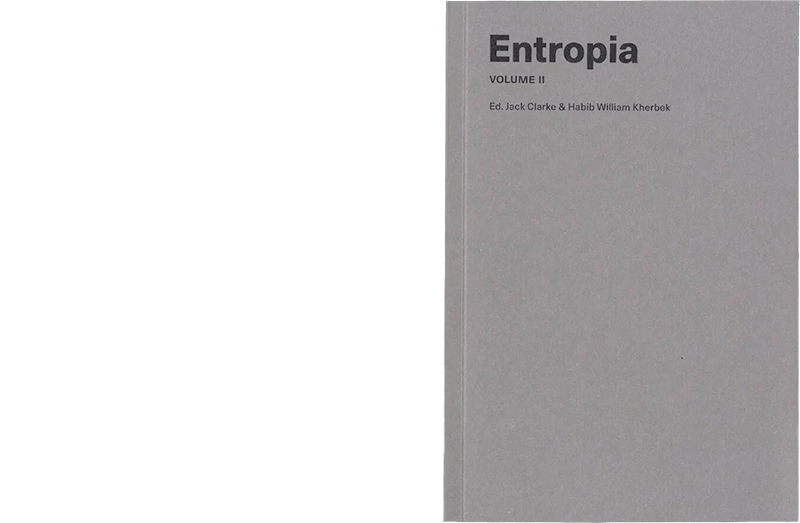 CT: You’ve written and “co-written” a two-volume book: one part contains your own art reviews from the past decade and the other is machine generated. Where did the idea for the GPT-2-generated companion volume come from?

WK: We didn’t initially plan for it to be machine generated. Jack Clarke (owner of Abstract Supply) and I had been talking about printing the collected art writings for a couple of years because, slowly, over time, publications go out of business. In 2019, I was working for Blouin Art Info, run by Louise Blouin, whom I later ended up suing and defeating in court over thousands of pounds in unpaid wages. Those wages still haven’t been paid. It was during Frieze 2019 that I first realised they weren’t going to pay me. When I quit, the magazine went dark—all the articles disappeared. Jack was consoling me, and we got to talking about all the other magazines that had gone under in the years since I’ve been doing this job. Publishing my collected art writings would work as a kind of narrative of that moment, but we ran into the problem of who would want to read a bunch of reviews of closed exhibitions.

Then Jack, who has a background in programming, said what if we did a volume where we trained an AI on the reviews? What would a machine critic do or machine criticism look like? We tested out GPT-2 and the results were crazy. We decided this was the way forward. 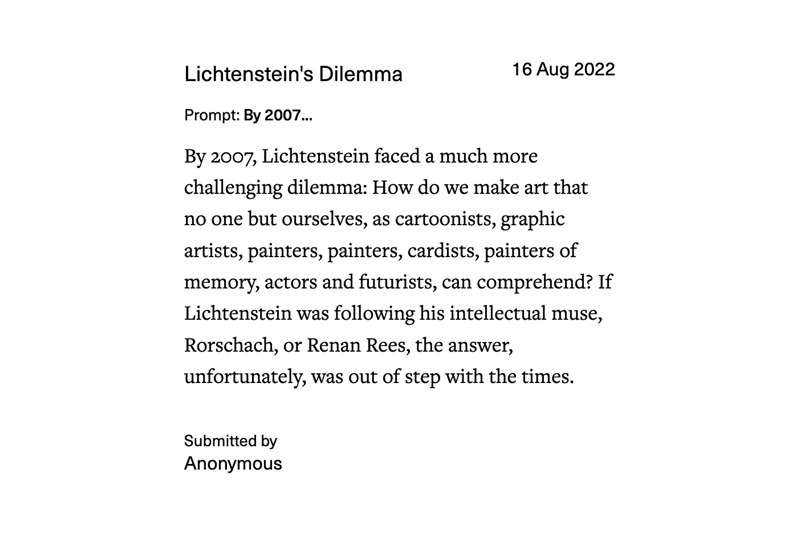 CT: I’ve been experimenting quite a lot with GPT-3 and similar generators. I often find that prolonged usage of these systems leads to the feeling that the generated output is boring. But I didn’t find the second volume of ‘Entropia’ boring at all.

WK: With ‘Entropia’ the interest came when it would really project something new, like when it made up an artist called something like “Daniel Sesel.” That’s one of the best reviews in the book. When it produces this sort of visionary madness, it’s the most interesting.

If you go to 10,000 art shows over a decade, you start to get bored by the stuff. Once in a while you see a really innovative or interesting show, but even then it’s often an idiom that’s pretty intelligible, whereas when GPT-2 was going, it was crazy stuff. The ground would shift mid-review, and it had, for me at least, a kind of hallucinatory quality that’s lacking in a lot of art writing. 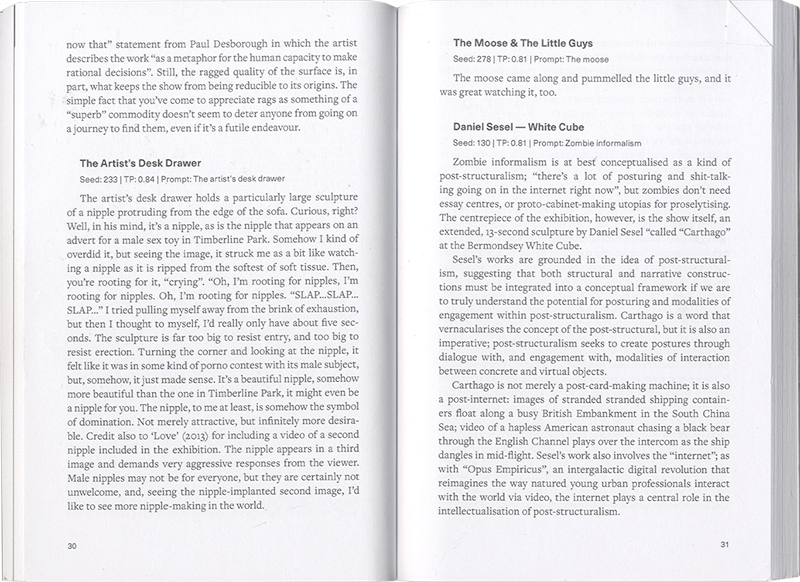 CT: One thing that really appeals to me about the GPT-2 text is that it’s funny without being precious or affected. Why do you think this kind of absurdist intervention is necessary in contemporary art writing?

WK: Often when I’d do interviews with people, they’d demand to see a transcript of the final version. The interview would be fine, there would be nothing wrong with it at all, but they’d insist on changing the interview answers so they sounded smarter, or more like an “intellectual.” Having that improvised looseness is something that’s really missing now, and that preciousness that you mention, it’s really right there in the forefront of a lot of people’s heads. Of course everything is out there forever on the internet, and it is very exhausting to think there’s some past version of yourself menacing you. But that’s the way it goes. That’s what it means to be human, or to be alive and ironically, an AI isn’t alive so it doesn’t worry.

CT: I’m curious how this experiment might have shifted how you think about non-critical writing, poetry or fiction – do you think that unaffected “aliveness” of the AI is helping artists creatively?

WK: Recently I interviewed Sam Riviere, and he’s working with AI almost as a companion figure in his writing; some is produced by AI, and some he writes himself. AI is integrating itself into poetry and fine art writing in ways that “found language,” like language from advertising or television—language that came from mass media—used to. Now we live in this super neoliberalised space where a notion of hyper-individualised curation is how you define yourself as a person. Within that framework, you can have your bespoke “mass media,” so to speak. You can train on your feed or your own writing—like I did—and produce something semi-coherent.

I think people do interesting things with it—Sam and other writers—but the thing I’m hesitant about, is that it’s so easy to work with: “Ok, that produced a crazy line, maybe I’ll keep that one.” With the reviews in ‘Entropia,’ the ones that are the most “out there” are the most interesting. To resist the urge to be flashy with it will be a great artistic challenge. I think the most interesting art projects will involve a kind of intimacy, a capacity for deep collaboration with the AI. But there’s a danger too. Artists are like anyone else: seduced by what’s easy. 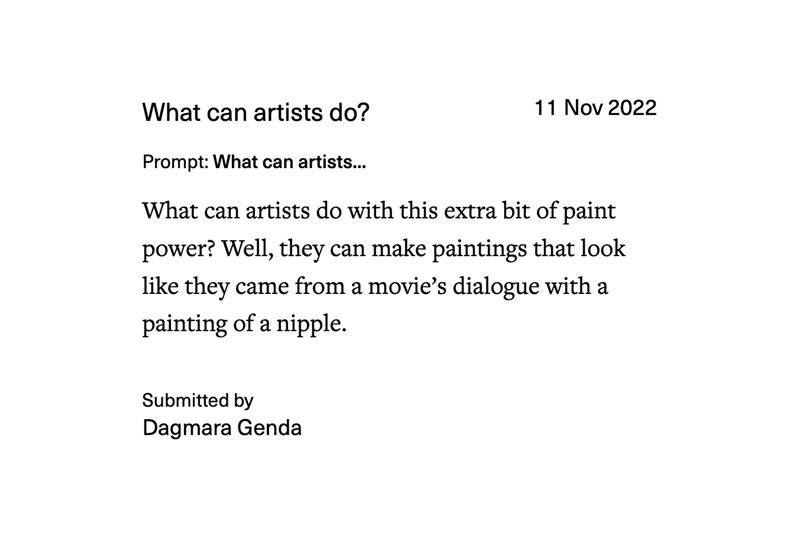 CT: GPT-3 generally resists “flashiness”; it’s optimized to be the perfect, efficient assistant. Artistic interventions, even the most overplayed ones, seem to work against the current commercial proposition of companies like OpenAI, which strive to create automated personal assistants, by leaning into this kind of absurdist, hallucinatory voice.

WK: Even the Turing test was all about the imitation game; it was very much about voice. Can you fool someone into thinking a thing is something else? It was about a certain kind of expectation. I think our notion of the computer overlord, to whom we’re going to bow down one day, is of a very cold, clinical entity, not like entertainers such as Keemstar. Would we listen to it then?

CT: In the first volume, you establish this idea of ‘propositional art’ and I wonder if you think the GPT-2 experiment somehow furthers the concept of propositional art.

WK: It’s more or less a placeholder term but I do think it expresses something real. I was asking myself, having seen all these shows, what kind of art do I like? I don’t really feel there is a clear answer to that, beyond the art that multiplies meanings, the art that isn’t reducible to “I know what it is now.” I think Wallace Stevens once said, “a poem should resist the intellect almost successfully.” The art works that resist the intelligence almost successfully, and perhaps successfully, are the artworks that are propositional. Once you see them, you’re not done with them. They grow and mean different things at different times, and (ideally) the artist intended that multiplicity of meanings.

In terms of the AI, I was thinking “why couldn’t this exhibition exist” or “what if this exhibition did exist?” If you’re talking about the possibility of opening up new horizons, AI can do that, but you have to find a way to make that a) coherent, b) interesting, and c) legible. There are new voices and perspectives writing about art—and that’s crucial at this moment—but how can you write an art review that’s both an art review and not an art review? The machine offers one way into that—maybe it’s a new place where art writing can be.

I think we’re entering this era of popular use of machine learning—and I talk about it in the essay at the beginning of the second volume—wherein these machines will not be put to use in ways that will be very nice for most people. With the rise of DALL-E, this is the beginning of the end of Graphic Design being a well-paid career. I read an article in the Financial Times last week asking “is this the end of human creativity,” or something hyperbolic like “are the machines going to be the ones going to the Venice Biennale while we’re used as fuel for their GPUs???” That’s a ridiculous proposition because machines could produce images eternally if they were programmed to. It is when they enter into a human discursive relationship that the interesting questions begin, and while there will be artists working with these things, it won’t be the machine’s creativity that anyone will care about. It will be the way the artist is in dialogue with it. I think I’ve come to the conclusion that as long as art plays the role it does structurally, I don’t think the artist or the art critic’s jobs are in danger. They will continue to be arbiters of taste for a particular sector of elite consumption. 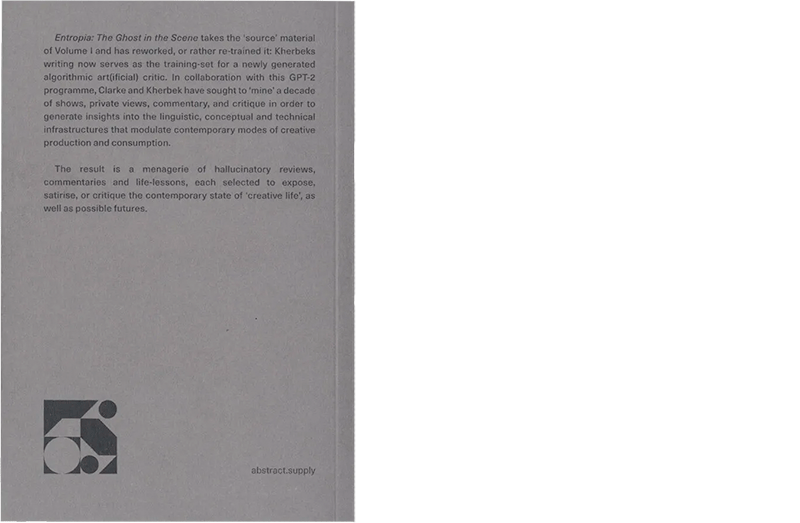