While critics wrack their brains trying to place artificial intelligence creativity into one of the existing artistic categories, artists continue to experiment with it, marshaling its technical properties in the most disparate realms. AI is gaining relevance in both critical discourse and formal production; no longer just a tool to support the artist, but a collaborator endowed, if not with its own reason, certainly with its own logic. In fact, one of the main reasons for artists’ fascination with AI lies in its autonomy, a characteristic that leads to new forms of authorship. Constituting, like all technologies, one of the main codes of our time, AI is opening new evolutionary horizons, aesthetic rules, categories of thought and, to borrow a term from anthropology, new collective representations.

In his current show at Galerie Mazzoli Berlin, titled ‘符号的智能 (The Intelligence of Signs),’ Donato Piccolo speculates on the potential of AI to infuse autonomy and even authorship into objects and signs, and thus animating them with a new type of intelligence. His technical research on AI goes hand in hand with a theoretical one. Using the technology as a starting point, he delves into the very concept of artificial intelligence at large. 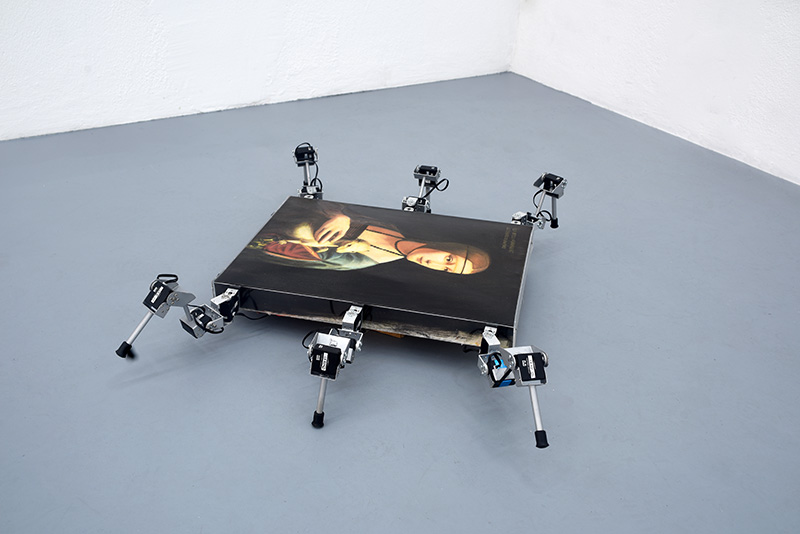 Piccolo works across sculpture, painting and drawing, and intertwines art, science and philosophy. Since the early days of AI, he has responded to this new technology by formally integrating it in his sculptures. In his practice, art has always been a reflection of the current world. As such, it should be able to communicate with it. In order to do so, it cannot use an anachronistic language, but rather, the codes of its time. In his words: “technology is the most effective way to express a contemporary concept. Man’s relationship with the machine is dictated by data. Through data we get to a deeper understanding of our collective spirit.” Piccolo believes that we are a whole and everything is connected by an unfathomable cause-effect relationship. Not by chance the Chaos Theory (with its famous “Butterfly Effect”) is recurrent in his work, represented on a large scale with sound sculptures or recalled through small butterflies in many of his drawings.

Large drawings, many of which look to be plans for pseudo-futuristic machines, and moving robots, whose bodies are adorned with renaissance paintings (masterfully copied by the artist himself), cohabit the gallery space. Both the hybrid elements in the drawings and the crawling robots look like creatures belonging to the same species. They point to the essence of Piccolo’s message. He sees the artwork as a space inhabited by independent and evolving signs, whose languages are constantly changing. His multimedia drawings consist of superimpositions of forms borrowed from different worlds: engines and electronic mechanisms merge with natural elements such as flowers and human faces. His visual vocabulary is populated with objects from different times, thus thickening the enigma of these vivid compositions, while at the same time drawing them closer to us. Just as these contraptions seem foreign and strange, they are also often part of our (real and virtual) lives. 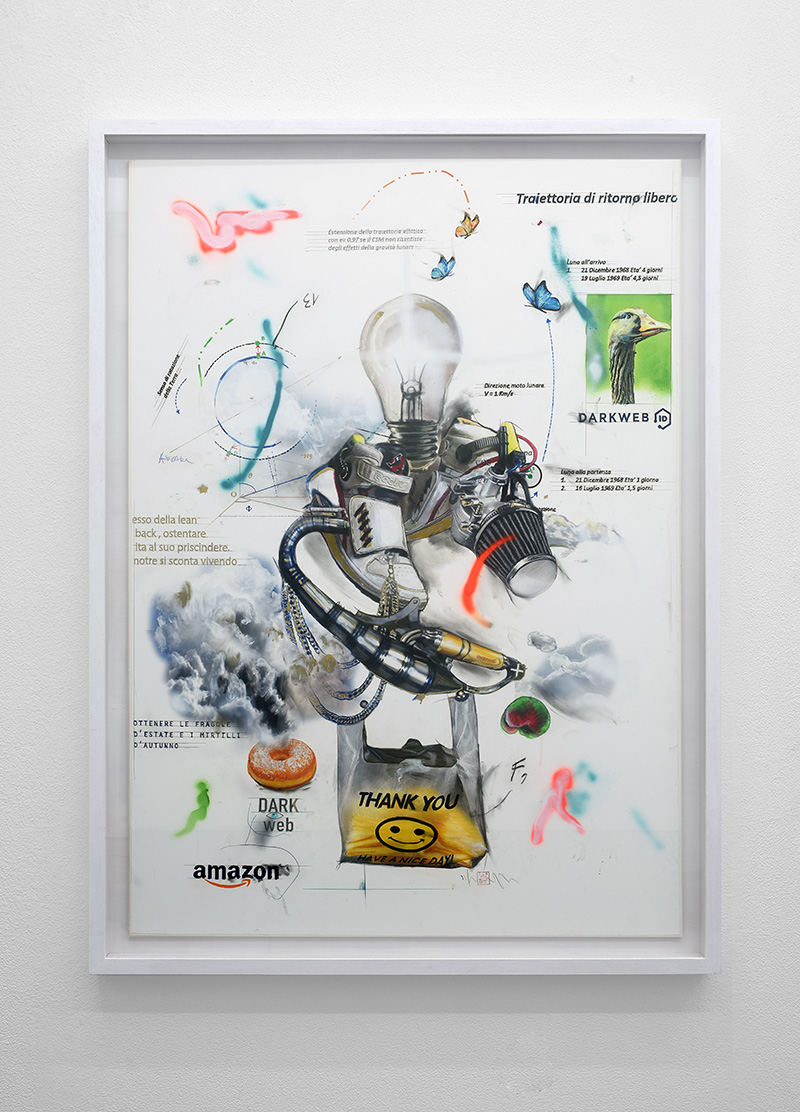 In ‘Traittorie di ritorno libero’ (2022), shoes, butterflies, plastic bags and a light bulb are surrounded by clouds and texts, like dates, scientific measurements and mathematical signs. Understanding their origin and meaning is impossible, and also unnecessary. Similarly, in works like ‘La sensualità di un bordo di parafango’ (2021) or ‘xxxxx (metamorfosi di un giorno felice)’ (2021), we can find snippets of text in Chinese, English or French, as well as indecipherable handwriting, mathematical formulas, operating instructions, graphs and geometric drawings, all complementing a symphony of mechanical elements and flowers, butterflies and human faces. Here and there we also find symbols that are part of our everyday visual feed such as Amazon, Nike or Instagram logos. At the same time, one of the small bodies of the robots walking shyly on the floor is made of a book about the Mona Lisa while the other is a reproduction of Leonard da Vinci’s ‘La Dama con l’ermellino’ (1488-1490) — an intentional redundancy. The presence of the Mona Lisa is an ironic emphasis on the potential of the sign and its identity as it is transferred, copied, uprooted, re-contextualized and allowed to wander independently in the world.

The particularity of Piccolo’s use of AI does not lie in the output, that is, in AI’s ability to produce new images outside the author’s control. This is the aspect that most artists today focus on. It wouldn’t be a stretch to say that AI-generative art has now entered our mainstream visual language. Our eye has become accustomed to the bewitching flows of images in which familiar forms are partially recognizable, only to sink back into an endless morphing process. Piccolo seems to focus on the earlier phase, that is, the data-set feeding the machine, or better: when the AI autonomously captures the information it needs to learn. The type of information here is of little importance. What the artist sheds light on, is the process of AI becoming an autonomous being.

However, to do this, the machine cannot be fed with a data-set chosen by its author. It needs to be able to explore the world on its own terms, which calls for the need for some sort of physical support. This is where Piccolo’s fascination with robotics comes into play. His little robots scan the space through an electronic neural system. While roaming around, they seem to become aware of their own identity. The artist invites us to follow them, not in order to see the outcome of their search, but rather to focus on what made them move and become alive. Autonomously exploring and interacting with other forms, they become new independent, intelligent signs. In short, what we see happening in the drawings hanging on the gallery walls, is also happening physically on its floor. 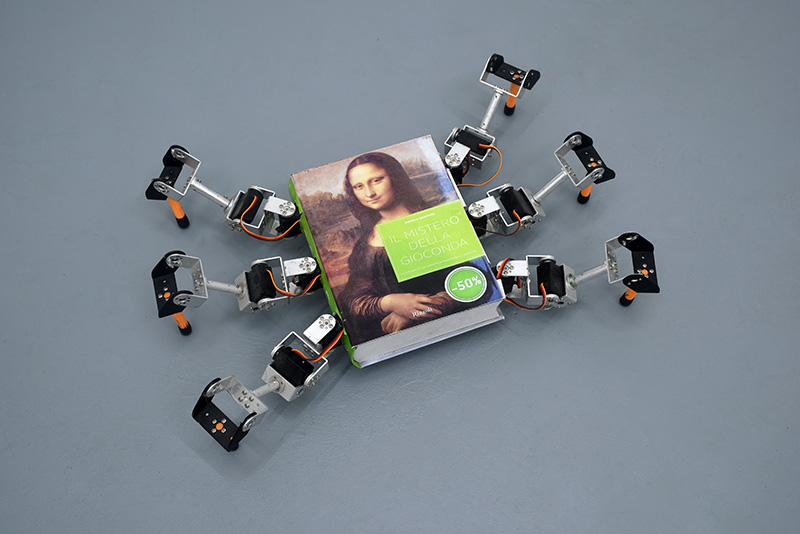 Does the sign exist only if its author exists? Here Piccolo’s short circuit comes into play, echoed in the title of the exhibition, ‘The intelligence of Signs.’ Written in Chinese but left deliberately untranslated for Piccolo’s Western audience, the artist proposes an intrinsic value for the sign, untethered from its author. In Piccolo’s view, when placed in new contexts, the sign can take on its own autonomous meaning, thus gaining its own intelligence, detached from its author and therefore artificial. Hence, Piccolo’s discourse shifts to the level of authorship: AI presents itself as a kind of new demiurge capable of breathing life into pre-existing forms of this world, turning them into new signs with an intelligence of their own. The Disneyesque scenario with objects brought to life by a magician, whose actions are unpredictable, comes to mind. With a touch of humor, the artist stages a world in which humans and natural and artificial objects merge into one complex and entropic living organism. We are not required to solve Piccolo’s puzzles. As the curatorial text explains, these are visual anagrams capable of stimulating multiple points of reflection and triggering alternative mechanisms of understanding the world.

The exhibition certainly fits into the context of current anti-anthropocentric trends in art, yet Piccolo’s vision distances itself from any warning about human arrogance and is not meant to impart any lessons. His message is also not one of ethics or social character. “Art should not teach anything,” he says. “It should not warn nor lecture anyone. Its language and form would be weakened.” For Piccolo, the intelligence of the sign is self-contained.