“Not everything about our life can be captured in language or captured in narrative. One of the reasons we go to art is that it has ways of articulating the inarticulable that can’t be put in the terms of the explicit.” It is this concept of the inarticulable as conveyed by English professor and literary critic Patricia Waugh during her lecture ‘Pathologies of the Postmodern’ that springs to mind when looking at Sassan Behnam-Bakhtiar’s second solo exhibition now on at Setareh gallery in Berlin. Called ‘Floating on Silence,’ the show comprises 14 paintings of gorgeous garish colours that leave little room for words (or names for that matter as all works are untitled), but stir up an instinctive pull to each one of the canvases. 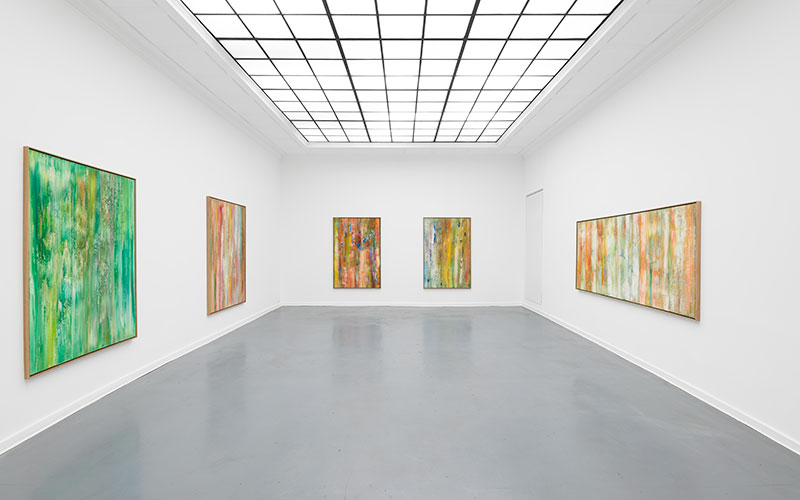 Indeed, the area where the French-Iranian artist operates is one situated beyond language, time or history; it is unmediated by speech and, at least for the artist, rendered authentic through silence. Gallerist Samandar Setareh, who walks us through the artist’s solo show in the video below, hints toward the reasons behind this situatedness—the artist’s cultural hybridity. “He is deeply rooted in a traditional sense, but is one of these new global citizens, an artist who can really reflect on different cultural expressions between the East, between the West, between a global civilization which is connecting everybody,” he explains. For Behnam-Bakhtiar, words represent a distraction, a redundant way to “fill the void” and keep ourselves on the surface of things without accessing them. Silence, on the other hand, “dissolves barriers” and helps us unravel the mind, reach deeper awareness and establish an all-encompassing, absolute communication with others. Silence is a meditation practice that informs his art, his own way of bringing about the ineffable, of “transforming energy into matter,” as he himself puts it. And meditative is his own signature technique. It consists of hundreds or thousands of layers of paint applied on every spot of the canvas before he scratches them off with a metal scraper, unveiling a thick accretion of colours and sensations, laying bare months of patiently sedimented work.

The layering and scraping of his method confer bold volumes and movements to his works, and a vague sense of tightness and anxiety, or grid-like claustrophobia, that one cannot help but associate with the current woeful political state Iran is in, and the regime Behnam-Bakhtiar’s fellow citizens are fighting against. Among the new works presented in Berlin there are two “surprise pieces” titled ‘Floating on Iran’ and ‘Floating on Freedom.’ Just as meditation has allowed him to discover that there is so much more to our tangible experience of the real, it has also shown him “the ability of the human body to heal itself,” to find positivity even in a dire state and never cease evolving. His art is the enactment of this rooted belief: it turns colour into flashes of energy, it plays with the invisible, with spirituality and connects remote ideas transforming them into an altogether new experience, one that needs little description, for it is alive and luminescent just as it is.