Berlin-based Polish artist, Roman Lipski began working with AI software to expand his artistic process in 2016. Together with Florian Dohmann, computer scientist and co-founder of AI consultancy firm Birds On Mars, he developed the “Artificial Muse,” a deep learning program trained on Lipski’s paintings—his use of color, composition, contrast, and texture. In the end, it produces new images that stylistically resemble the artist’s work but also propose new possibilities for technique and composition. For Lipski, who has been exploring ways to combine image-making and new technologies ever since, it was a means of moving past a creative block and pushing himself into other forms of image-making. In response to the work made by his “AI Muse,” he would make a new painting, which he would then feed back into the system. Out of this conversation between artist and machine a new creative process was formed. 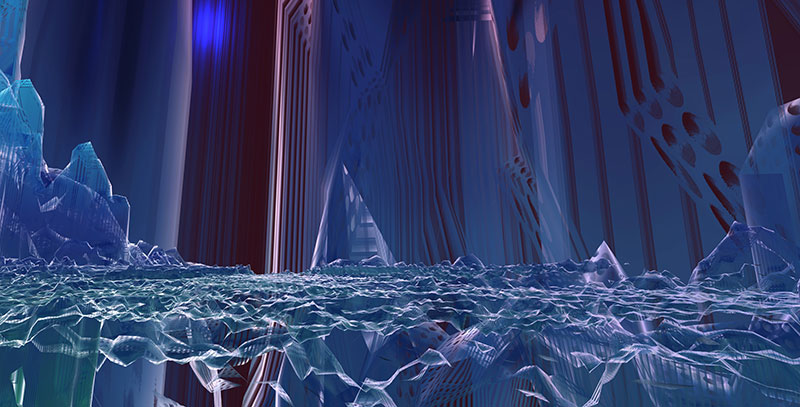 Roman Lipski: An example of a digital image made using Quantum Blur // Courtesy of the Artist

More recently, Lipski has entered into the realm of quantum computing, specifically through the use of “Quantum Blur” to create images. For these particular works, he relies on open-source software, originally made, as he explains, to be used at quantum hackathons, where simple games were developed using quantum computing. But what does this technology mean for the artist and how has it affected his creative practice? Why has he kept painting when the possibilities of technology could easily lead him to other mediums? We sat down with Roman Lipski to find out more.

Julia Mazal: How did you start working with Quantum Blur?

Roman Lipski: Quantum Blur is a quantum-based image processing effect, which encodes images into as few qubits as possible, and then allows them to be manipulated through the unique dynamics of quantum mechanics. I became aware of Quantum Blur through my interaction with Zurich-based quantum research scientists Dr. James Wootton and Marcel Pfaffhauser.

To quote Marcel Pfaffhauser,“To use Quantum Blur, the image needs to be encoded as a quantum circuit, which is normally highly entangled, before the Quantum Blur effect can be applied. The process creates not only a blur effect, but also interference effects, due to the entanglement.”

JM: How do you use it to create images?

RL: With Quantum Blur I define the input sources. These are then encoded into quantum states, allowing manipulation by interference patterns using quantum operations. My work on the computer in the 3D worlds of my Quantum Blur exploration allows me not only to create digital pieces, but also has had a direct influence on my recent painting.

My practice with Quantum Blur is quite distinct from my work with the AI “Muse.” Quantum Blur allows me to be present in every creative decision of the process, whereas in the case of the AI Muse, the neural networks are trained solely on my existing body of work. Inspired by and in dialogue with the AI, ​​I continue to paint new pictures. 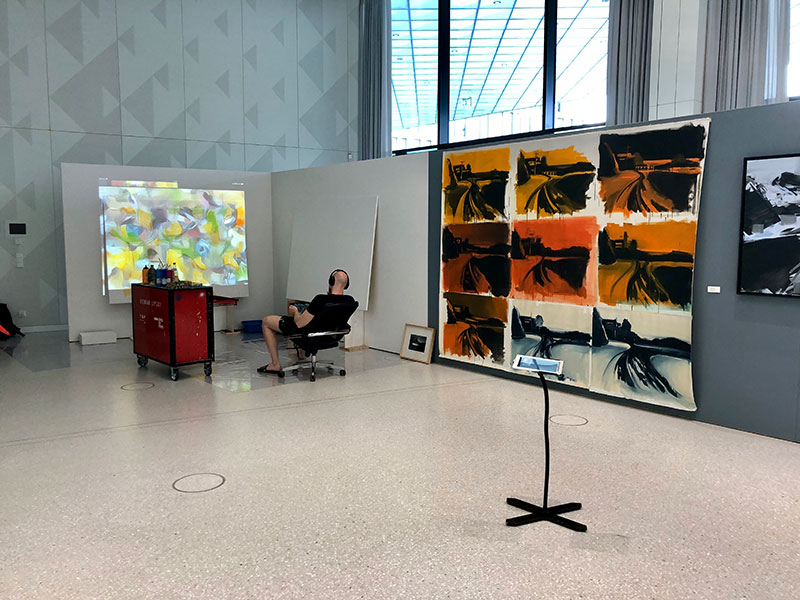 Roman Lipski at Futurium, Berlin, 2018 // Courtesy of the Artist 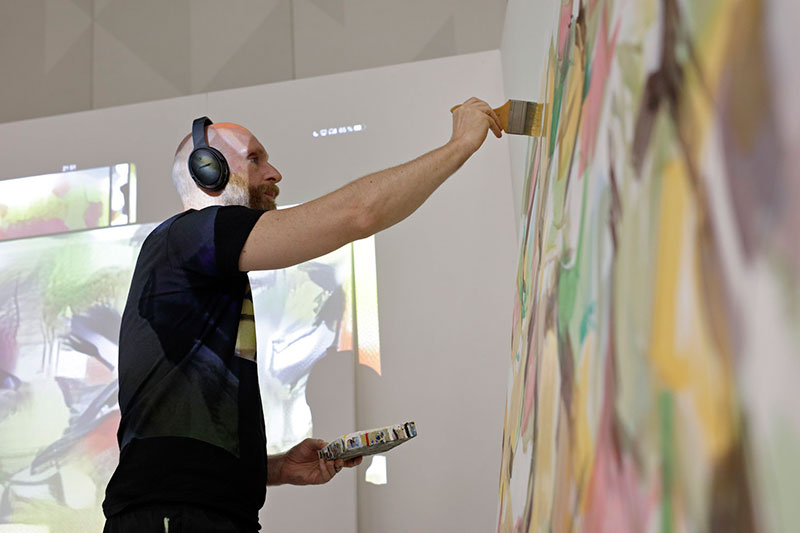 Roman Lipski at Futurium painting in dialogue with his AI Muse, 2018 // Photo by Hans-Georg Gaul

RL: Quantum entanglement makes the process unpredictable but not random, since the same input always creates the same output. The reason for its unpredictability is that it operates against every intuition we have about how things classically evolve.

RL: I don’t want to generalize, but our mutual work flows in both directions. How exactly is difficult to pinpoint. I think it affects everyone differently and individually. Also, it is a process we are in together. It was an eye-opener for the scientists to turn the coin and see their work from a different side. The software was made for informal uses at hackathons, and it was surprising for them that, in the hands of a professional artist, it became a powerful tool to create contemporary art. This then allowed them to write a new paper, exploring the quantum origins behind some of the effects that I found most useful in my work. 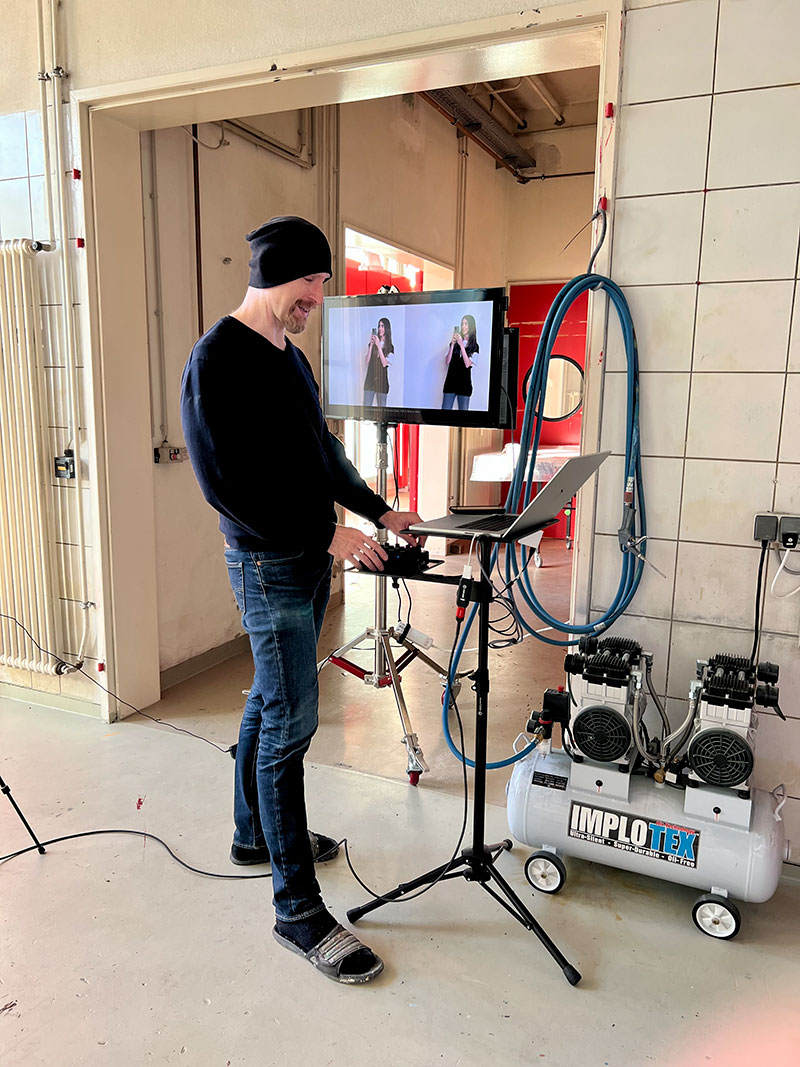 Roman Lipski in his studio

JM: With seemingly infinite visual possibilities revealed through quantum computing, how do you choose between them?

RL: It’s easier for me to make the decision here than in the physical world, because when I sit down in front of the computer to work, I’m destined to create something. Most of the time I move in a certain spectrum, after all I have to initiate a process. I have to give the program an input. I decide intuitively. I’ve been painting for almost 30 years, that helps too.

JM: Why stick to traditional formats? Why keep painting?

RL: The spectrum of possibilities is enormous for me at the moment, but what I prefer are hybrid models, where the analog and the digital are combined and mixed. Painting is physical; it takes the whole body and mind to express yourself. On the monitor, I only limit myself to my cognitive abilities, eyes and a few fingers. That’s not enough for me. 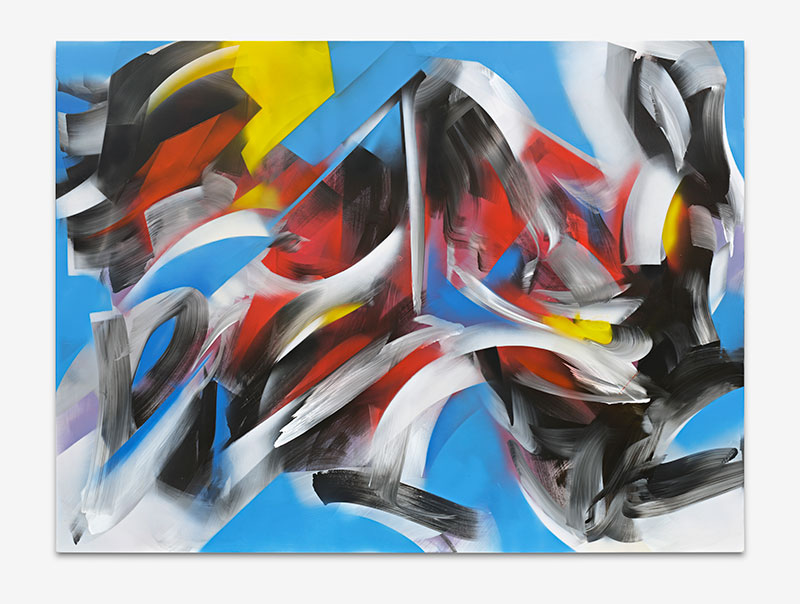 JM: You have said that AI is your muse, but do you think this muse can be exhausted? For example, do you think AI has recognizable consistencies in aesthetic language (pixelated, digital aesthetic…), and if so, will you have to search for a new muse once this one becomes a feedback loop?

RL: AI aesthetics has its limits. I’ve noticed that for a long time. Luckily right from the start I used AI as support at a critical moment. It was just inspiration and I continued to paint with brushes on canvas. As a result, I have never been dependent on the program. AI draws our attention to the creative potential of humans, to our quality, diversity and uniqueness. AI supports us in our work, and does not replace it. I find myself in a kind of dialogue with the Muse; the networks are trained again and again as needed. This is a never-ending story. However, since I’ve been painting on my own lately, in parallel and in response to my work with Quantum Blur. The AI Muse hasn’t been involved.

JM: How has the use of AI changed your creative process?

RL: Thanks to the experiment with my AI, I was able to successfully change my painterly style, give up the early routine and start over. This opened the door to stepping beyond my prior visual language and painting abstractly. I did it with the help of AI. The transformation was completed a while ago. Except for short moments, I only paint alone, like I used to, only better.