This article is part of our feature topic ‘Artificial Intelligence.’

In his latest exhibition, ‘Another World’ (2022), which opened this Fall at KW Institute for Contemporary Art in Berlin and the Institute of Contemporary Arts in London, Christopher Kulendran Thomas explores the lost histories of the Tamil community using vast quantities of online data combined with his own personal experience. Using Unreal Engine and Generative Pre-trained Transformer 3 (GPT3) the artist accesses restricted landscapes, interviews AI generated avatars, and fabricates text, creating visions of potential realities from unrealised histories. Imagining identity beyond the nation state is central to his exhibition, as well as raising questions about what it means to be human. Creativity is also dissected with the help of AI, which he employs to analyse the influence of Western ideals on contemporary Tamil and Sri Lankan art. 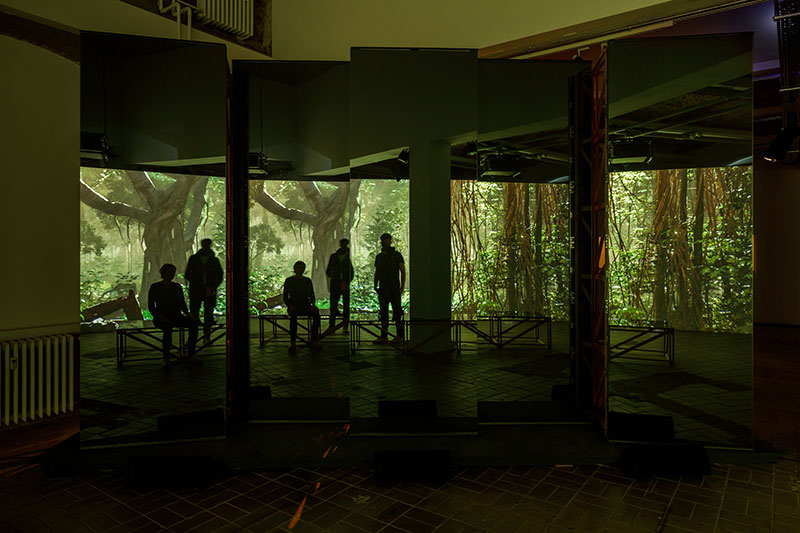 Developed with Kulendran Thomas’ longtime collaborator Annika Kuhlmann, ‘Another World’ places AI in a continuously vacillating role, between tool and participant. Installed across two floors, the exhibition features a major new commission, ‘The Finesse’ (2022), which takes the form of an immersive film installation that is part-filmed and part-generated. It also includes segments that are algorithmically generated anew each day, specifically the moments featuring the most watched clips from news channels, TikTok and YouTube. At one point Kim Kardashian appears across the five monolithic mirrored LED screens installed opposite a wide projection of what looks like filmed forest footage. The audience, sitting in the middle, can see the foliage as well as themselves reflected in these screens as Kim K. begins to speak—an unsettling effect because she is not actually the real-life model and influencer but, perhaps appropriately enough, a deep fake. Kim K.’s avatar speaks with calm authority about the damaging effects of social media on her children, as well as her own Armenian identity.

The inclusion of a Kardashian jars with the otherwise related themes in the film, though her comments on identity, especially one that has been historically threatened with eradication, could be understood to mirror Kulendran Thomas’ own examination of Tamil nationality. At particular intervals the screens go blank turning them into five black glossy stelae towering before the audience, reflecting them and the projected forest in the background. Suddenly, they illuminate again. This time a Tamil spokeswoman (perhaps a liberation fighter) walks through a forest, and explains the historic and contemporary ambitions of the Tamil liberation movement. As a member of the diaspora himself, Kulendran Thomas’ use of modern technology is in dialogue with the Tamil liberation movement’s early adoption of the nascent internet to coordinate a globally distributed parallel economic system amongst the Tamil diaspora, a development that influenced his earlier work, ‘New Eelam’ (2016). 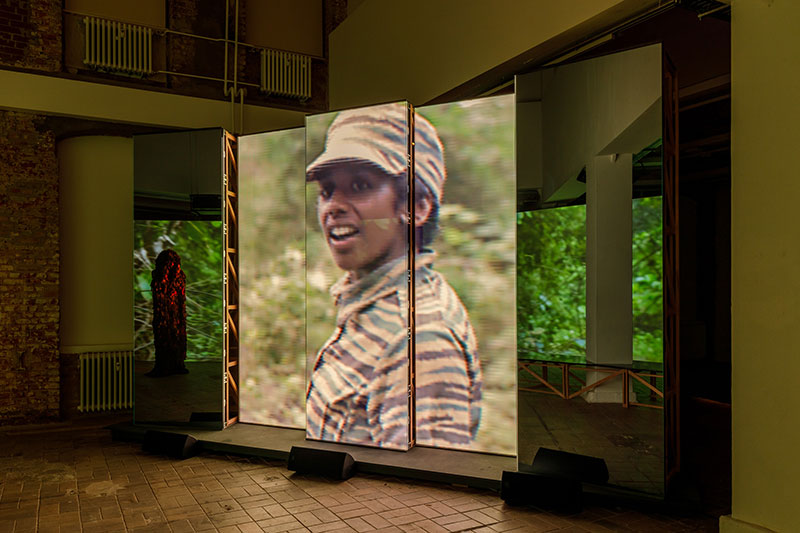 Installed within the installation, and reflected along with the audience in the tall LED screens, are larger-than-life figures by Tamil artist Aṇaṅkuperuntinaivarkal Inkaaleneraam. These figures tower above the audience, their masked faces staring ominously out of bodies made from ghillie suits, as if surveilling the audience and the work. At one point a similar ghillie suited figure appears in the film, but dancing to a pulsating rhythm. The forested scene behind the audience, as one might expect, is no ordinary forest; it is made of both real and fabricated footage of the jungle in Eelam, the name for the proposed independent state sought by the Tamil community in the North and East of Sri Lanka. The fabricated scenes were created using Unreal Engine, a 3D computer graphics game engine software, which Kulendran Thomas used to generate areas of the forest he was barred from accessing by the Sri Lankan government’s archaeology task force. The digital materialisation of lost Tamil land is a sort of symbolic reclamation. 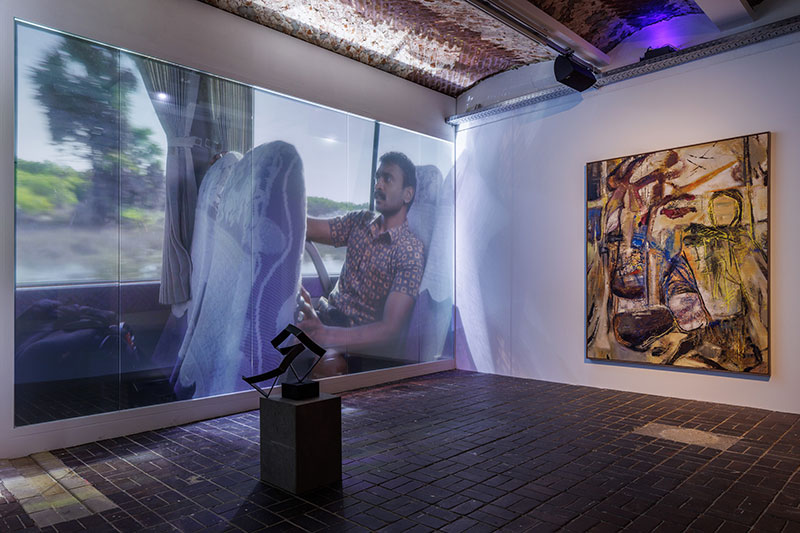 Christopher Kulendran Thomas: ‘Being Human,’ 2019/ 2022, in collaboration with Annika Kuhlmann, installation view of the solo exhibition ‘Another World’ at KW Institute for Contemporary Art, Berlin 2022 // Photo by Frank Sperling

The precursor to ‘The Finesse,’ ‘Being Human’ (2019), is also shown in the exhibition but in a newly adapted form. The use of AI, glassy surfaces and intermittent pauses in the film are the formal attributes tying these two works together. For ‘Being Human’ the exhibition space is bisected by what looks like a milky glass wall onto which the film is projected. At scheduled intervals the dimmed lights turn on and the glass becomes clear. In the bright light, the projected film disappears to reveal the bordering room, which is filled with sculptures and paintings. ‘Being Human’ follows a young Tamil artist who is travelling on a train to his father’s hometown. He discusses the influences of analytic philosophy on identity and art. Instead of Kim Kardashian, this video features an avatar of Taylor Swift, who talks about the importance of authenticity and concludes that “simulating simulated behaviour is the only way we have of being for real.” 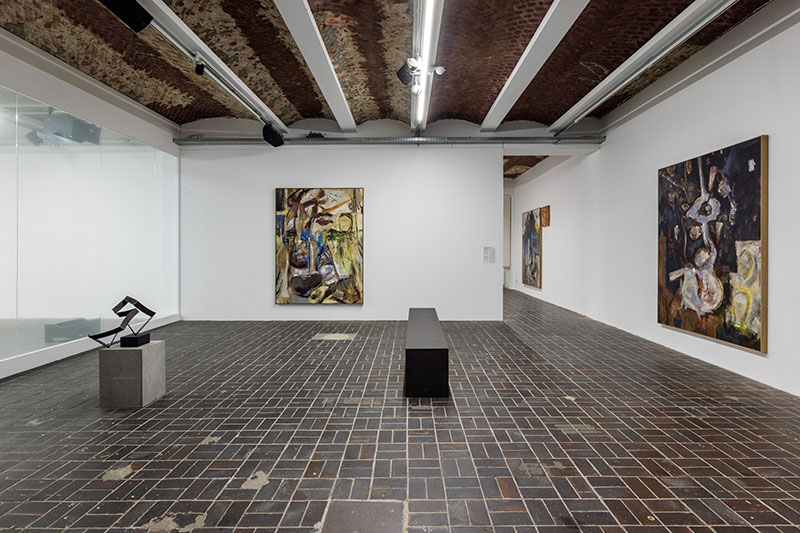 Christopher Kulendran Thomas: ‘Being Human,’ 2019/ 2022, in collaboration with Annika Kuhlmann, installation view of the solo exhibition ‘Another World’ at KW Institute for Contemporary Art, Berlin 2022 // Photo by Frank Sperling

Kulendran Thomas has also employed the help of AI in commissioning a number of new paintings. The large abstract works were created using neural networks trained on the memetic circulation of art historical motifs. These themes, born from the analysis of everything from the Western canon to Sri Lanka’s post-civil war art world, were transformed into PNGs, which were in turn painted by the employees of Kulendran Thomas’ studio. By engaging with the continuous influence of imported colonial aesthetics, Kulendran Thomas attempts to untangle the long-term effects that colonial regimes have had on art in now postcolonial nations. They also highlight the ways in which AI can demystify creativity as well as suggest developments in an artist’s style based on the exact origins of their inspirations. 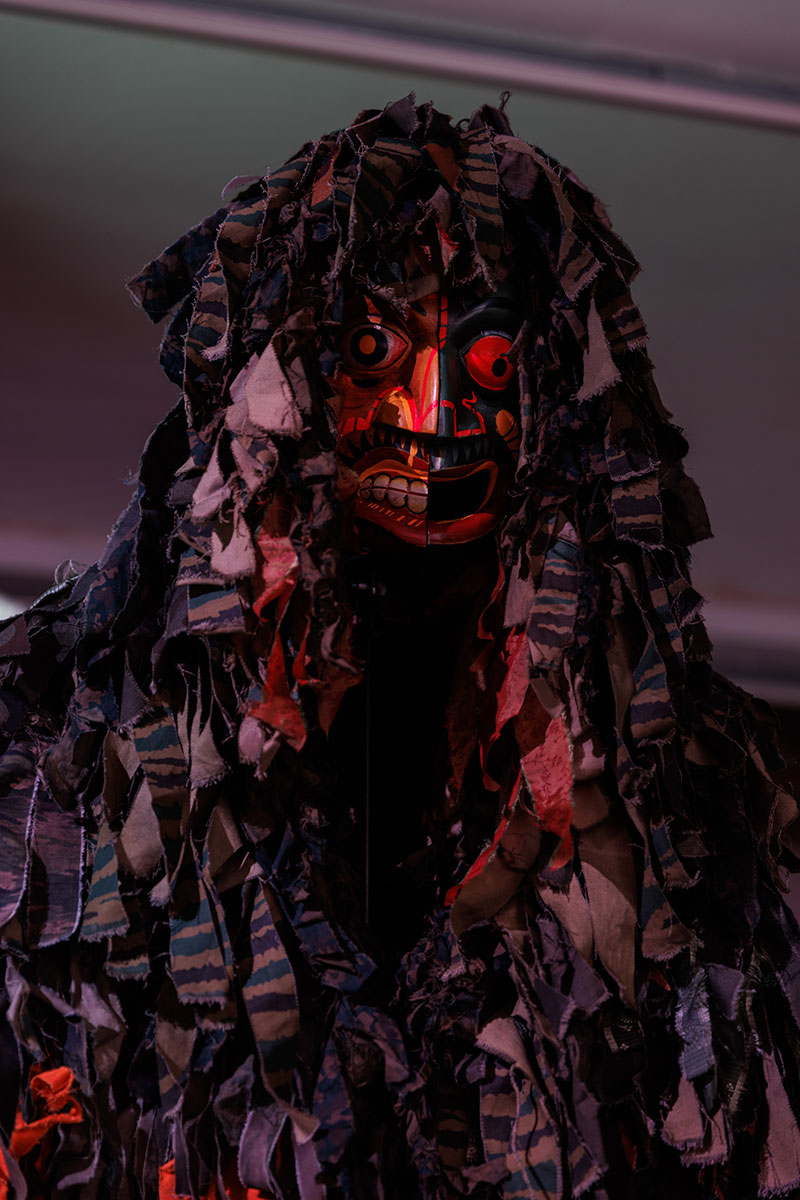 With the help of AI, Kulendran Thomas not only excavates the lost pasts of the Tamil community, but projects into possible futures, exploring simultaneously what could have been and what could be. While his use of technology is diverting, hovering between imaginative and critical, it does complicate questions of identity, nationality as well as creativity. Who are we and where do our influences come from? What constitutes community and nation? How can they be maintained without land? And perhaps most pertinently, can technology help answer these age old questions?