Perhaps it’s because art hasn’t centred on handwork for at least a good six decades now that exhibitions tend to veer toward immersive, experiential formats. Surround sound, big screen, VR and gaming are all competitors in the experiential circuit, which may be one of the reasons why Vienna-born curator Cathrin Mayer often turns to meticulously designed exhibition architecture in the presentation of her shows. The group exhibition ‘Systems of Belief’ at Halle für Kunst in Graz is a prime example of this approach, though the dominant stage-set often takes precedence over the works on display. As Daniel Buren once put it, the show becomes “the exhibition of the exhibition as a work of art.”

The visitor first enters a common black box video space, albeit with a purple floor, which serves as a reception area for an installation of minimal sculpture designed by the curator herself. Only upon exiting, does one discover that the room is one of a series of crate-like purple constructions alluding to modernism, freight and reflecting the geometry of the gallery. From most standpoints in the room, one cannot even catch a glimpse of the art. The containers cast shadows so deep that they appear as stains, eliciting a strange kind of geometric bruising on the walls of the 1950s pavilion. Purple, with its connotations of mysticism and royalty, is the dominant colour in many of the works and was thus chosen as the connecting thread for the show. In reality it is also a divider serving to box the artworks in.

This is a shame because the constellation of artists chosen by Mayer is by no means uninteresting—she mixes “outsider” with insider artists, local and international, contemporary and recently passed away. In the black box plays ‘Third Eye Butterfly’ (1964), a two-channel film projection by Storm de Hirsch (1912-2000). The piece would have been quite the spectacle in its original format—two 16mm film projectors rattling in unison to a wild soundtrack of percussive noise. In ‘Systems of Belief,’ the work has been digitised and seamlessly looped, a compromise that cuts the monetary and environmental cost of shipping and introduces a European audience to her work. Though the American filmmaker was deeply involved in the New York film scene, she remains a footnote in art history. The canon of art, notes Mayer, is itself a system of belief “shaped by rules and dogmas” determining who gets let in. 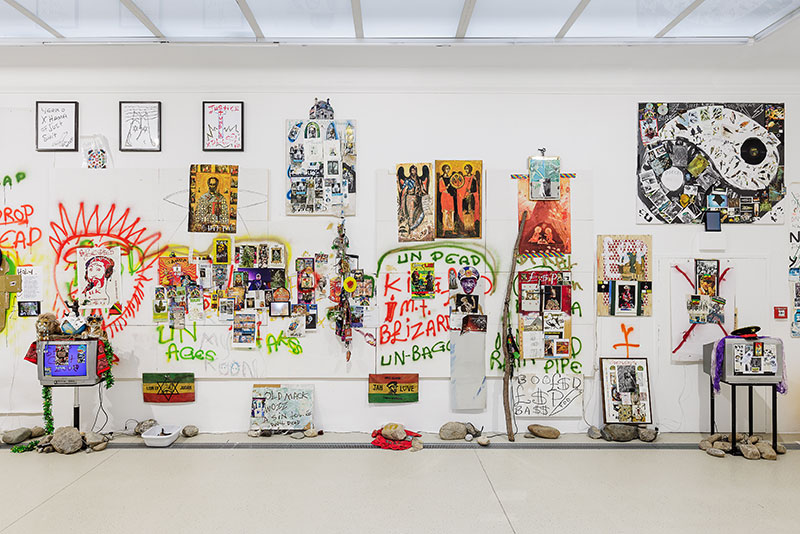 In his own room without purple accoutrement, is the installation by Jamaican musician and music producer Lee Scratch Perry (1936-2021), who, among other things, helped Bob Marley to worldwide fame. Their falling out is evidenced by the inclusion of a picture of Marley nested into the wild tableau of videos, spray paint and objects with the words “Eat Shit” written over it. The installation consists of parts of Perry’s studio, whose walls were removed and shipped to the Halle für Kunst. The posthumous assemblage is something of a collaboration, since Perry’s accumulations were always made on the spot using particular methods. He would, for example, incorporate rocks from the nearest body of water, so the museum staffed drove five times to the river Mur to collect a number of sizable stones. It has been said that the artist and musician would leave his hotel rooms in a state similar to the installation presented in the show. 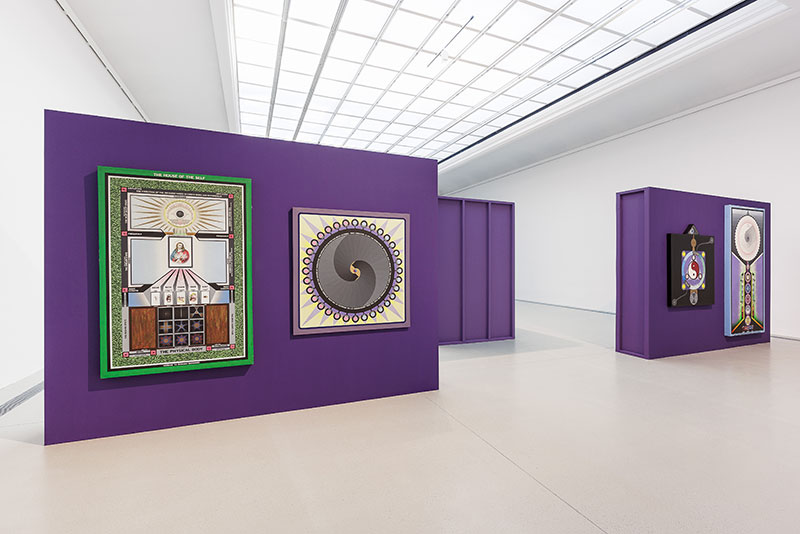 Leaving Perry’s sanctuary one returns to the purple crates, rather than, for example, going directly to the other “outsider” artist in the show. Paul Laffoley’s (1935-2015) works bear a similarly cluttered, multi-media aesthetic, especially ‘Pistis Sophia’ (2004-06), even if they are made with a different sensibility. Laffoley’s dense mixtures of religious symbolism are not like Perry’s explosions of personality, but they are just as autobiographical. The esoteric images are highly controlled—perhaps evidence of his mild autism and the fact that each piece took up to three years to make. Pairs of paintings are exhibited facing the wall on purple crates, thus repeating the framing devices already used by the artist and further confining them.

Literally boxed in is Richard Kriesche’s ‘Artsat-Space Message Sculpture’ (1991). Positioned on a plinth and hidden in a crate, the golden plate is dramatically lit by a hole cut in its roof, thus poaching the theatrics of mediaeval churches, where circular windows were strategically positioned to guide the sun’s rays onto the Madonna’s virginal face. Its dramatised presentation reinforces the theme of the show and nods to the reification of art, though it doesn’t do much to lead the audience back to the origins of Kriesche’s work, which was actually a participatory piece. 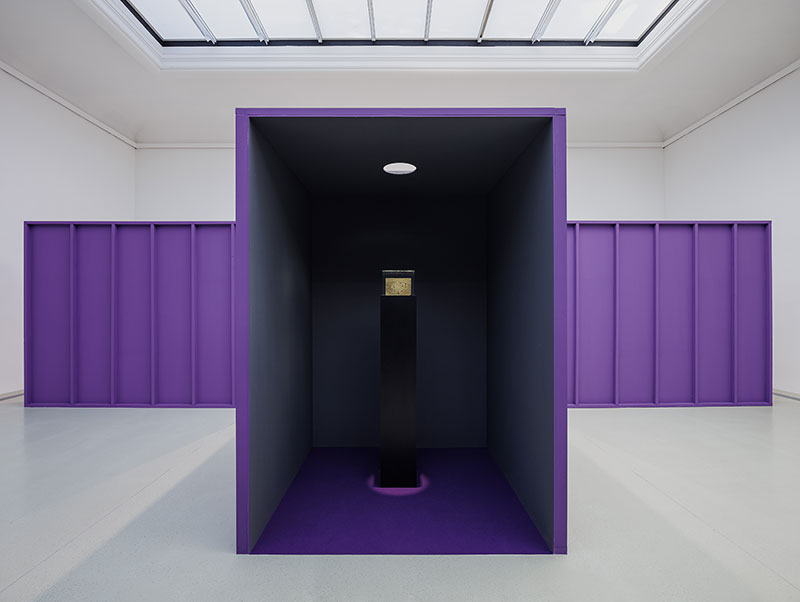 In the basement Jordan Belson’s (1926-2011) abstract short film ‘Chakra’ (1972) is exhibited in a black box reflecting the one upstairs. With its intermittent organ soundtrack, it announces the sacral atmosphere. Surrounding the makeshift black box chapel are 10 small tightly rendered pencil crayon drawings by Marta Riniker-Radich, that, in their dramatic spotlit presentation, read like the stations of the cross. They lead to the centrepiece by Irina Lotarevich: an aluminium plate in a frame bearing resemblance to both an LED monitor and a suitcase with a dense grid of locks installed within it. Framing the piece are presumably the keys to the locks, or at least the outside row. The title, ‘Housing Anxiety 6’ (2022), makes sure the viewer doesn’t wander too far from the already visible allusions to security and storage. As the show’s concluding statement, it alludes to the anxiety of presenting art, which, without its meticulous framing, seems to never be quite enough. 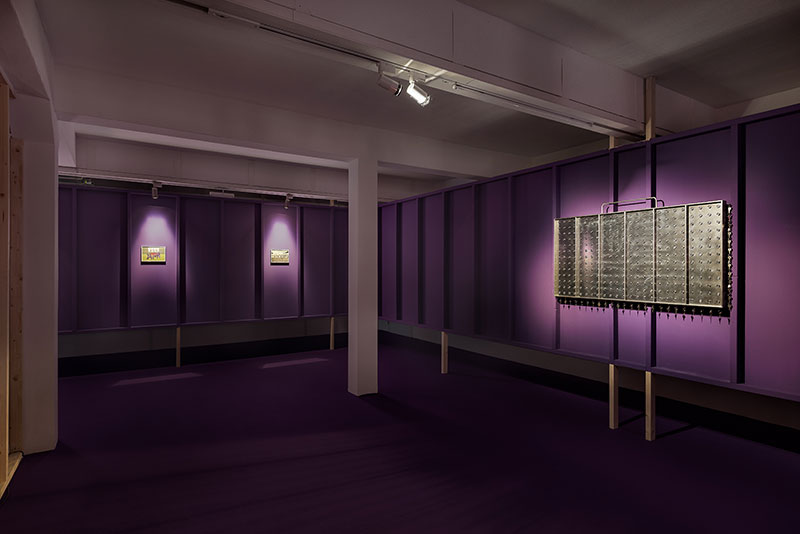 Although art institutions might make up a tiny percentage of humanity’s carbon footprint, it is curious to see how much more exhibition architecture than art there is in the show. According to museum staff, most of it will be later discarded. If art’s currency is symbolism, the message sent here is decidedly mixed. The dark heavy crates seem to house an anxiety about the meaning of cultural objects and their worth as a public good. The forbidding structures read like an architecture of defence—the bunker of culture unsure of its role in the midst of an oncoming siege.