COLLABORATION // An Interview with Julian Weber

No Sommerloch at Tanz im August 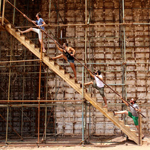 To admit, I spent an inordinate amount of time, last month, watching olympic gymnasts do impossible things on the barbie-pink mattresses of the London gymnastic hall. In glittering one-pieces, their makeup running with tears and sweat, these girls’ bodies were hypnotizing, their efforts communicating no message besides years of practice and physical ability. I watched on safely from my couch…[read on…]