On the 17th of January, the Berlin Fashionweek Photodiary™ #2 was presented to the public. It is an independent project which is set to establish itself as a permanent and sustainable feature of the Berlin fashion scene. This photographic diary tells the story of the Berlin Fashion Week in July 2010.

The interest of both editors, Photographer Marc Schuhmann and Art Director Joern Toellner, lies in the authentic documentation of Berlin Fashion Week. It’s about a multifaceted demonstration of the chameleonic spectacle and about the unadorned conservation of special moments from unusual perspectives. 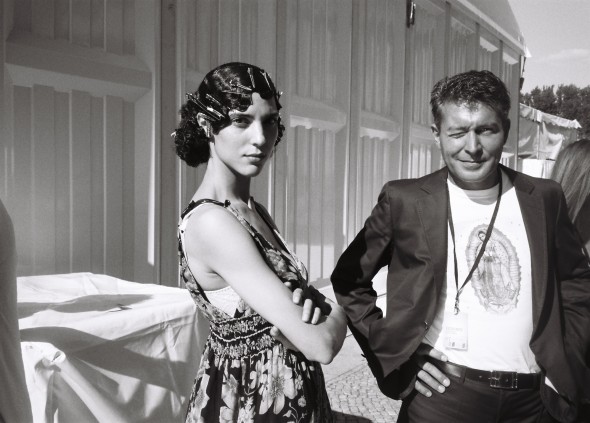 The Photodiary™ offers intimate insights into the designer studios of Michael Sontag and Esther Perbandt. The photographs show motives from the tent on Bebelplatz, from the “Michalsky StyleNite” at the Tempodrom and from the avant-garde show “Designer Scouts” at HBC at Alexanderplatz. Last but not least, you can see the “Show 10” from the graduates of the Universität der Künste (UdK), the award ceremony of “Start your Fashion Business” of the Berlin Senate and much more.

The selection of photographs developed in an analog way exclusively and curated by Marc Schuhmann and the outstandingly sober design by Joern Toellner convey the atmosphere and the goings-on of the Fashion Week in the summer of 2010 and give the book its special character. A situation, which is enforced by the fact, that it is completely abstained from the use of opulent equipment. Nearly all photos were taken with tiny rangefinder-cameras such as the Olympus mju 2 or the Yashica T4.

The unique photographs are complemented by pulsating accompanying texts of Berlin journalists and adepts of the fashion scene (Blonde, Sleek and Zoo Magazine) as well as by statements of individual fashion designers.

The Berlin Fashionweek Photodiary™ #2 is to be released by Seltmann+Söhne publishers.
Format 14×19 cm, 192 pages, hardcover in black velour, thread-stitching, 127 photographs in black and white and colour, accompanying texts in German and English, ISBN 9783934687936, Price: 34,90 Euros.
thephotodiary.de

Index of designers and labels from the second edition