Last week at Transmediale’s grand opening, Reynold Reynolds debuted his Secrets Trilogy, a cycle of three videos that he has been working on for the past three years. Reynolds’ show is supported by the exhibition series Labor Berlin, which started in 2010 and “is dedicated to the creativity and potential of international artists who have chosen Berlin as their new home.”

I had seen two of Reynold’s videos before, but the Transmediale opening was first time The Secrets Trilogy has been brought together as an installation, including the premiere of its third part, Six Easy Pieces. The videos are composites of 16mm recordings and photographic stills (which means they are technically “digital transfers,” but let’s just call them videos). The videos’ stop-motion filming techniques allow Reynolds to deconstruct the idea of filmic time as it unfolds around the trilogy’s “protagonist,” played by the lovely Helga Wretman.

In the earliest of the videos, Secret Life (2008), Wretman’s character is isolated in an apartment overgrown with plants. The plants appear to move and grow at an incredible speed, encroaching on her as she sleeps and eats. The camera moves around the scene from the point of view of the second hand of a clock – jolting to varying degrees around an axis at the center of the apartment, accompanied by ticking noises.

The title of the final film, Six Easy Pieces (2010), refers to the book Six Easy Pieces: Essentials of Physics explained by its most brilliant teacher, a collection of lectures by renowned physicist Richard P. Feynman that were originally written in the 1960s. It is installed as a three-channel projection that alternates between walls. It features Wretman and several other characters in a cabaret-like montage, references to famous paintings, and the infamous goldfish resurrection experiment: a fish is taken out of water, quickly frozen in liquid nitrogen, and then tossed back in its tank where it comes back to life. 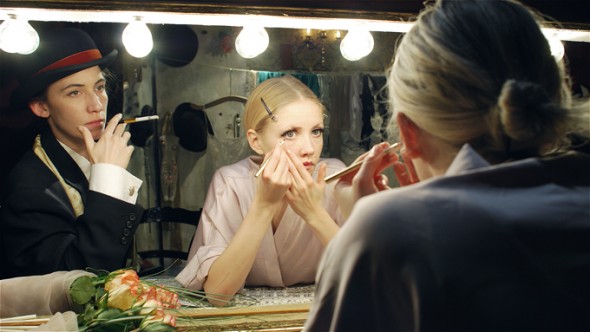 There is no doubt that the videos are beautiful. The stop-motion movement is at once disconcerting and engaging, the colors are lovely, the flowers are fresh, the shots are carefully-considered, the soundtrack is well-produced, and, of course, naked women are always a hit. But as a video-maker friend of mine said during the opening, “Stop motion is pretty much every video artist’s wet dream. There has to be a really, really good reason to use it, or it’s just total masturbation.” I happen to think that good art is always masturbating someone – but I start to get suspicious if I’m not sure there is also something else going on. Most of Reynold’s motifs are straightforward, and his intentions entirely transparent. In the first video, banal references to femininity and fertility overwhelm us – a semi-clothed Wretman eats a mountain of fruit, combs a blonde wig, and writhes around in composting fruit. In the second video, we begin to wonder if the tons of clocks and metronomes and stacks of books with titles like Of Time, Passion, and Knowledge are necessary hints for the audience to get the point. We know that the piece is about time and measurement – the stop-motion technique has already told us that. The result is that props end up looking like props, not content. Reynolds’ background in television and advertising has made him excellent at producing images, but there is danger of the videos creeping into “concept commercial” territory. However, there is enough depth to carry us through, in part due to Wretman, who manages to be extremely compelling. It may not look like she is acting, but she gets across a good deal of emotional variation despite her apparent complacency. Wretman, who is from Stockholm, has classical ballet training, but over the past years has choreographed her own performances and worked as material/muse for various artists besides Reynolds: Aids-3D, Anne de Vries, Peaches, Dirk bonn, Tomi Paasonen, for example. In real life, she is petite, so small that she has occasionally stunt doubled for child actors, but on screen she is commanding. She is able to be very present on screen even in a state of total apathy. In fact, this bizarre apathy or complacency is where the first two videos catch on something, become more than means to their own ends. Reynold’s past work has dealt with apathy as well, with humans becoming subsumed by their environments. In 2002’s Burn, an apartment burns down around its inhabitants, who do nothing but swat absentmindedly at the flames. What we are supposed to make of this apathy in Secrets is unclear, but the third video helps us get there by more fully alienating the us from a sense of time and space.

There is a moment between some frames in Muybridge’s motion animations (the first GIFs), in which we are suddenly made aware of our own experience of time. When all four of the horse’s legs are in the air at once, for instance. Video, and particularly stop motion, has the ability to divorce us from our own temporalities. When this is successful, it’s a physical sensation. Have you ever stepped off the curb into the street and misjudged the distance of the step? There is a moment in which it feels like you are going to fall forever. These fragmentary experiences are important ruptures in our perception. Reynolds has mentioned that he hopes to create a sort of Cubism of time, and in Six Easy Pieces, we begin to understand this. The alternation of the projection between walls and the less-straightforward narrative sufficiently disorient the viewer in real space as well as in real time. And there is not such a clear line between Reynold’s initial idea and its fulfillment. In both art and science, the most interesting experiments, perhaps the truly successful ones, are those with unexpected results – those that actually want to figure something out rather than presupposing their own conclusions. Reynolds has said of the first video, “In Secret Life, I had in my mind the question: could a person be on screen simultaneously with plants, and move as the same speed as the plants?” The answer is, apparently, yes. But in Six Easy Pieces, neither the question or the answer is so straightforward.

The success of the final film may also be due to the presence of more characters. There is a whole crowd in one scene, and several women interacting another. While the intimate psychological space of the first two films allows us to feel close to Wretman’s character, it is far more rewarding to watch her interact. The more complex emotional space we reach through this interaction makes filmic time feel more truly sinister. I began to think of death. Perhaps this is because I had heard that several fish had died during the filming of the actual fish resurrection experiment, which took place in Berlin’s MMX Open Art Venue early last year. Reynolds says of the fish resurrection: “I like this idea because I think it’s precisely what people were hoping film could achieve, which is to take some moment of life and preserve it for a certain amount of time, and then re-animate it, bring it back to life, and experience it again.” In this sense, the trilogy can be seen an temporal experiment, and the audience is the subject. On the trilogy’s opening night, a huge crowd of viewers was packed in the dark screening area at Haus Der Kulturen Der Welt. Each time the projection shifted from one wall to another in the Six Easy Pieces room, the mass of people would gasp and shift around in the darkness, washing back and forth according to the changing projections like a shoal of fish, in a way that seemed – yes, like we were part of a science experiment.