A group of Berlin-based performance makers and thinkers band together to present a four-day “performance assembly.”The four-day mini-festival of performances, discussions, and partying is called FOR THE TIME BEING. The self-organizing group of artists and thinkers are an international set (from Australia, Austria, Germany, Poland, Russia, Spain, UK, and USA) whose loose origins as a “crew” can be traced back about four years: a connection through mutual friends, a summer afternoon rave in a sandpit in the middle of the woods, a housing arrangement, a performance party, and a pilot program for contemporary dance at UDK. The group is comprised of lovers, ex-lovers, sisters, coworkers, collaborators, friends and roommates. They are artists working in dance, visual art, sculpture, video, curation, collage, performance, poetry, web design, philosophy, and more, but their focus with this project is expressly “performance” and the variety of ways in which they are each engaging with the increasingly popular notion. I am one of these artists. 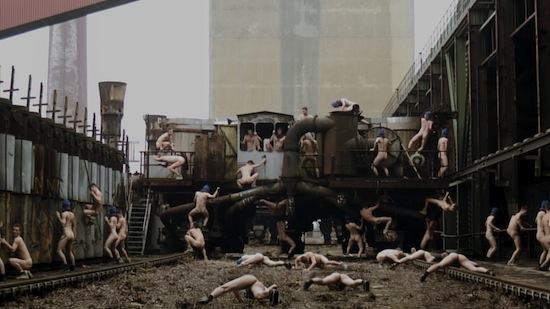 We are at Fuchsbau. It’s a Saturday afternoon and those of us who are in town at the moment are huddled in the back room over coffee. Some of us are recovering from the previous night’s rituals of release after a long workweek, some coming from other jobs. We go through the agenda, discussing logistics and refining the concepts around the discursive formats of the panel and round table discussions that are important aspects of the project. Who is ordering the beer, when do we pick up lights, who is attending to ticketing, who will order the sound system, when can we get into the space to set up, where should we photocopy the zine, etc.? The vibe is supportive and between us we have the bases covered, sharing knowledge and links to various communities and resources. After two and a half hours, we wrap it up and I continue in conversation with the few that are not too fried or don’t have to rush off to other engagements. I ask, “Why this and why now and what is this about?” and the conversation gets rolling.

“Its about strengthening relationships and an affirmation of “what is.” We are a community. What do we bring together as a group without relying on outside support,” says Alex, the key initiator of the project. “This project reflects how we live and how we work and a desire to address the broader issues at stake, beyond our individual work, to understand the current circumstances and the potential in the moment.”

Johannes adds, “It also reflects a desire to be here, to work and live and accept being here [in Berlin.]”

“It seems that we are taking a more solid position of being based in Berlin after a period of transience,” says Adam.

I note that the majority of the group has in past years lived in other cities, calling Berlin home base but often satelliting to other places for work. I myself present regularly in NYC; Ligia worked from Ghent and Brussels for two years, touring internationally with Les Ballet C de la B; Alex and Adam continue to work and tour with choreographer, Meg Stuart; Eric and Marysia are working in Vienna right now; Diego and Dmitri are at a residency at PACT Zollverein in Essen… the list goes on. Many of us hop from one residency to the next, one gig here, one gig there, constantly sending out applications. “Its almost easier to be away from Berlin than to commit to being here,” I comment. “But with increased mobility are we really increasing our quality of life?” 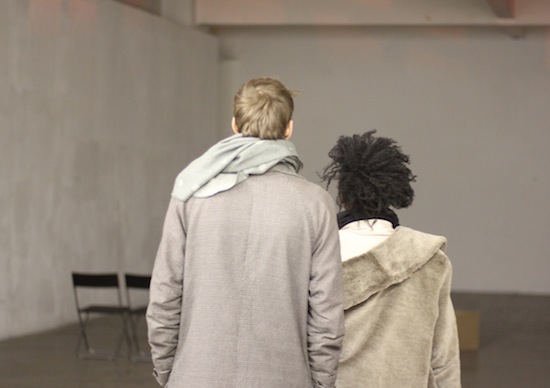 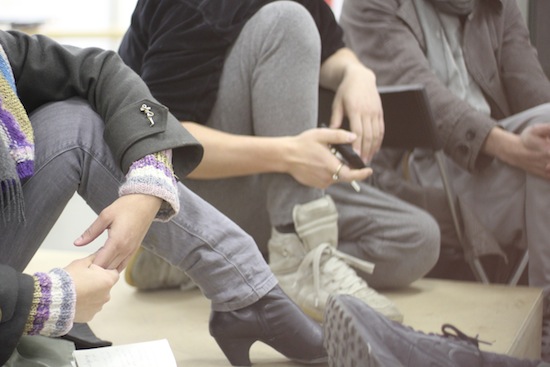 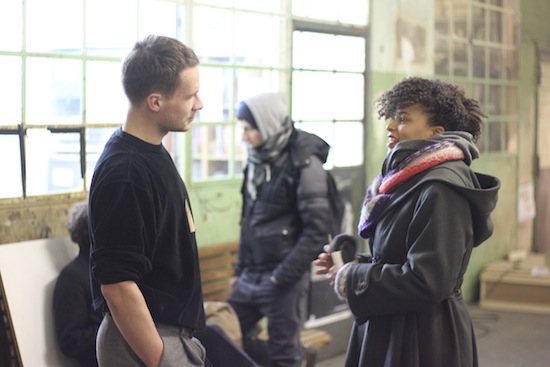 This question resonates within the festival with its a clear emphasis on locality and sustainability while also acknowledging the sense of transience in the current cultural moment. “The title itself is a kind of question,” says Adam. “Here there is no exertion of expertise or specialization. There is no single through-line to what is being presented. We’ve all individually arrived to a point professionally and have decided to band together to make something happen.” Alex underlines the idea that the festival is definitely moving away from definition.

This is interesting because earlier Alex has mentioned that the project functions to “strengthen”, “solidify”, and “affirm” relationships within a community. Next to ideas of dispersion of a center or focus, this appears contradictory, but upon further consideration I see this assembly is gathered not in spite of differences and under a unifying theme but rather to celebrate those differences and to expand upon ideas proposed within the four-day event. Adam says, “It hasn’t been hard to muster up a dynamic amongst us with such a variety of skills and interests.”

Banding together in this case is seen as working together to facilitate the opening of a broader platform for exchange rather than as an act of group identification which is, in effect, an act of enclosure, definition, and exclusion. “Its a chance to bridge, to make a close-knit community open up beyond who we see all the time,” says Jessica whose contribution to the assembly specifically invites the interaction and engagement of the audience in the form of a workshop open to anyone who registers in advance. The program of performance also includes other interactive formats like open discussions with invited Berlin-based guests from the worlds of culture and business as well as a Saturday night dance party.

It seems that achieving “togetherness” even if only temporarily is the radical action here. Being together is tough these days. FOR THE TIME BEING seems to be a loose container for a shared experience on a larger scale and I don’t think any of us are certain about exactly what it is or how it will go down. We hope in fact that it doesn’t “go down” but sets into motion more dialogue, more exchange, and more performance.

We slowly start to gather our belongings and pay for our coffees, quickly recapping the to-do list. Hugs and kisses are exchanged as much for support as to say goodbye. There is plenty to get done in the days leading up to the opening. Walking home, I reflect on the inherently social nature of performance. I remember Alex’s words, “Working with people is a way to be with people.” I’m starting to think the hyper-mobile lifestyle of the contemporary artist is overrated and smile at the thought that at least for the time being I’m here, in Berlin, actively engaged in process with these artists. 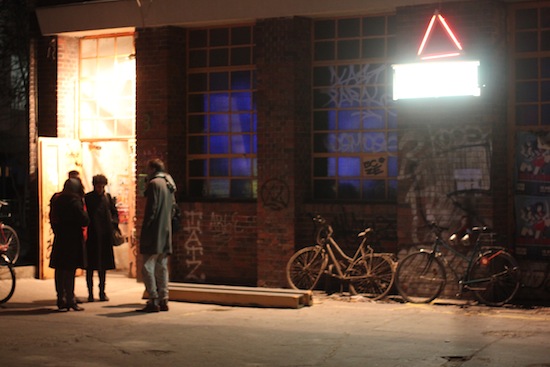 FOR THE TIME BEING
A four-day performance assembly at Flutgraben
March 17–20, 2011
Flutgraben (formerly known as Kunstfabrik)
Am Flutgraben 3, Berlin (Click here for map) 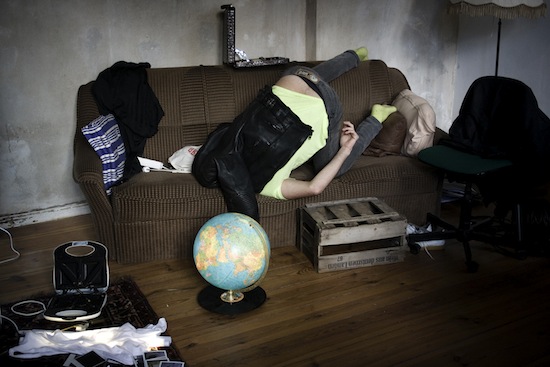 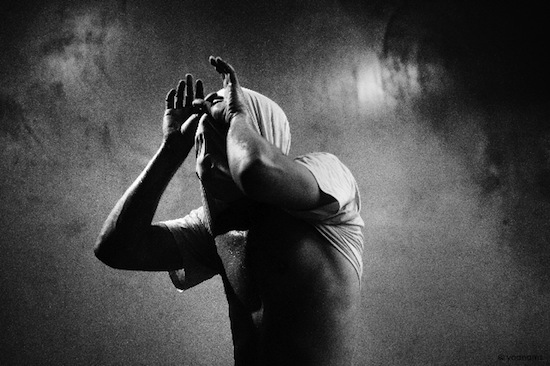 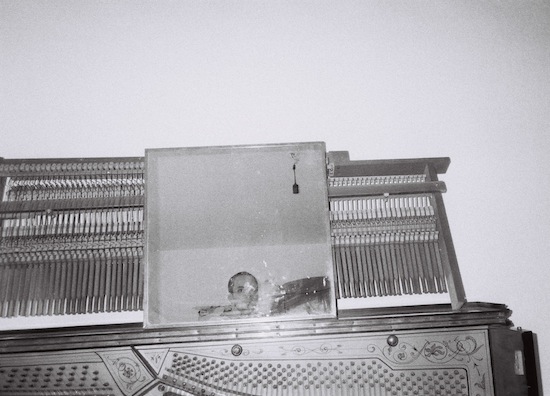