On Tuesday night, the much anticipated Based in Berlin show finally opened at Monbijourpark. The show presents 80 emerging contemporary artists across 5 venues and a nearly two-month long programme. Ambitious to say the least, the show has been given a heavy burden – to both distill and represent a broad and diverse scene in a single project and to test the waters for more public investment in contemporary art. That said, the dissent and debate present during much of its planning stages (I think enough has been written about this), now seems to have abated in favor of simply enjoying the ride. The sprawling Monbijourpark space is fitting as the main exhibition venue. The show there, while incredibly dense and comprehensive, is somehow also light-hearted. Based in Berlin takes its responsibilities seriously but doesn’t get bogged down by them. 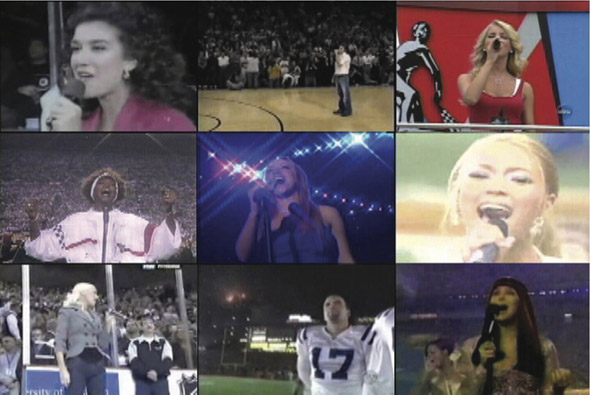 I started my journey walking down a long corridor (which I’m not sure was the proper entrance, but oh well), lined with works by Jay Chung & Q Takwki Maeda – a series of “head and shoulders” style photographic portraits that seemed both dated and oddly familiar (perhaps because of their conventional style). They are, in fact, all pictures of the former opponents of current Berlin mayor Klaus Wowereit. Somehow this knowledge cuts through the serious political expressions present in each, rendering them as inescapably kitsch.

Right from the start it was possible to feel the intense energy of the exhibition, rooms to both sides held comprehensive installations, while the audio from Asaf Koriat’s The Brave (2006) blared from one end of the corridor. This split screen video work shows nine celebrities bearing rapturous expressions while belting out “Star-Spangled Banner” to eager Super Bowl masses. These moments of ecstasy appear helplessly cheesy and overwrought in their new context, doing the same for the mass entertainment spectacle as Chung and Maeda did for the political one. 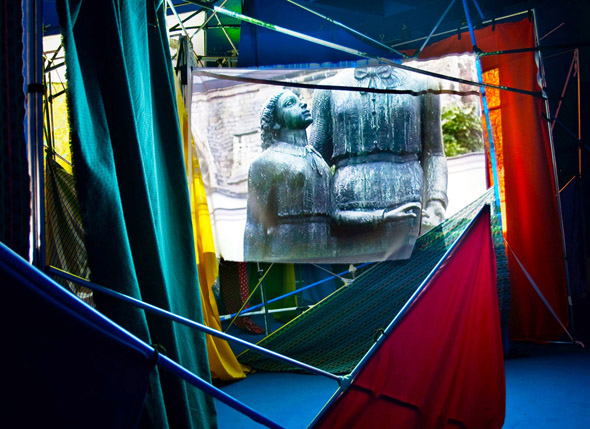 Unsurprisingly, the primary modus operandi for artists seemed to be installation. Notable ‘rooms’ included two side-by-side, decked out respectively by Roselin Rannoch and Yorgos Sapountzis. Rannoch’s installation took the form of a series of sculptures that seemed to have both autonomous material concerns, while clearly being designed to subtly alter the nature of the room. Sapountzis’ work, meanwhile, consumed the entire room with a haphazard structure made from metal tubes and colourful fabric paneling. On one surface a projection of the work ‘in action’ revealed its potential as a public sculpture that could be demonstrated as much as installed. 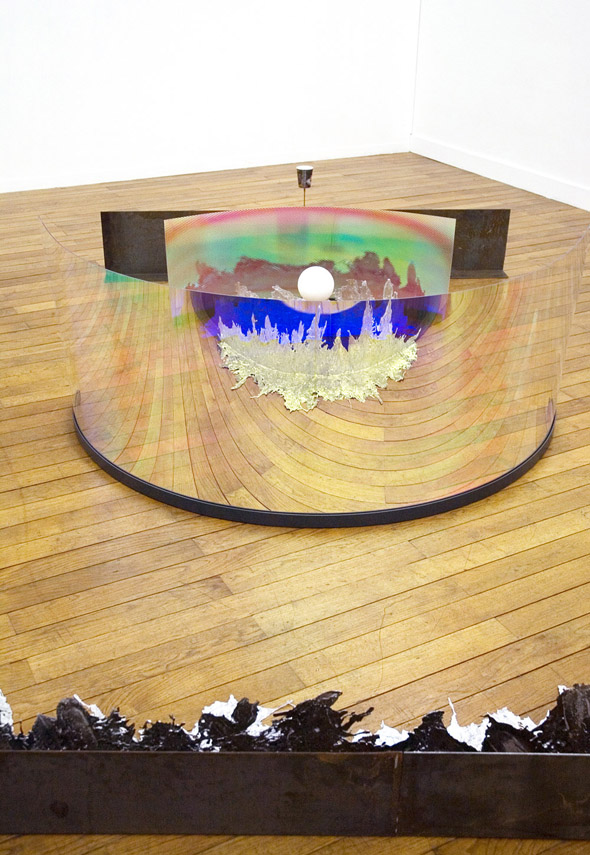 Moving outdoors to a courtyard area, one wall was completely adorned with iconic Christiane F posters from the 1981 film about the real-life of a young Berlin addict. As a member of the nebulous ex-pat artistic community here (who also comprise the majority of participants in Based in Berlin), Jeremy Shaw appropriates the posters as a sort of singular shared point of cultural reference – one that reaffirms one’s status as either an insider or outsider. 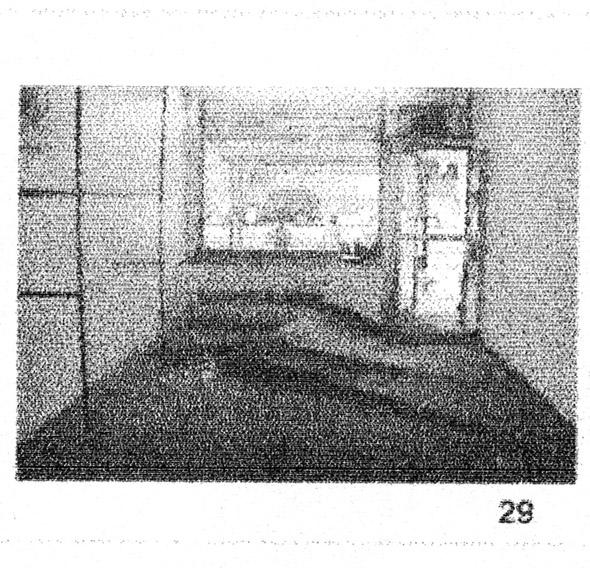 Then, it was down into an underground ‘cellar’ space where two stark black and white Klara Lidén projections flickered appropriately on the cold damp walls. In a room at the end, Köken Ergun’s Wedding was showing. As I walked in, the sulfuric smell of the room seemed to come directly from the screen where a bridesmaid was being sprayed with copious amounts of hairspray. The 12 minute film of a Turkish / Berlin wedding is one of the most captivating works in the show – at some points I literally felt like clapping along, only to be suddenly reminded I was in a cold dark room with a crowd of contemplative art spectators.

While the show hangs together just barely as a veritable funhouse of contemporary art (I have touched on less than one eighth of artists on display) it does so in a fairly charming way. The spill over of light and audio from room to room, adds to the sense of anticipation as you work your way through, no work is autonomous or sacred, but neither is it ever overwhelmed by the show en masse. There are interesting little spaces to be explored quietly, Trevor Lloyd’s work for instance, has a quaint room on the second floor with a window overlooking the Museum Island. A folder of naïve sketches (Portrait of my mother drawn from memory with my eyes closed, using my left hand, standing on my head, 2009), seem the perfect inverted reflection of the monolithic establishments just over the Spree. 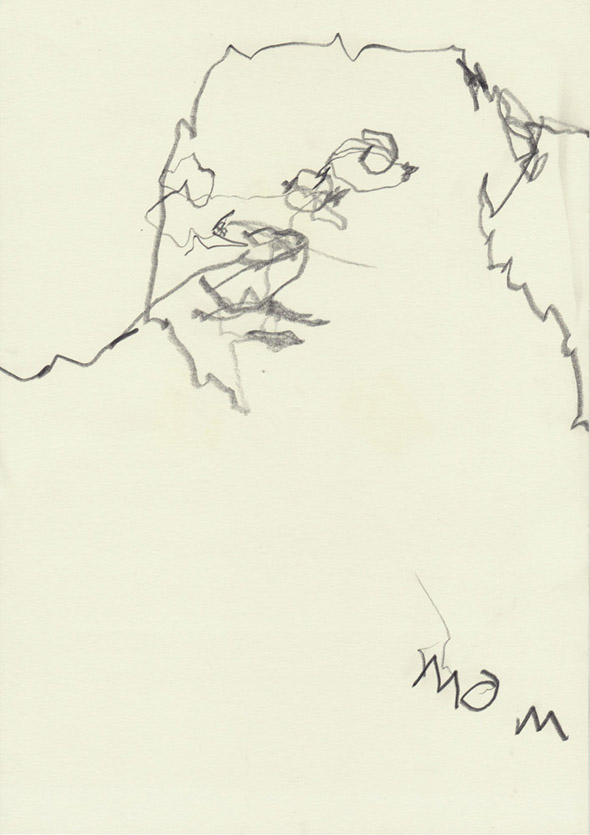 Trevor Lloyd: “Portrait of my mother drawn from memory with my eyes closed, using my left hand, standing on my head” (2009), Graphite on paper; Courtesy of the artist

While I really have no idea whether the artists selected in Based in Berlin accurately reflect the broader scene (surely they do not), the Monbijourpark exhibition certainly seems to capture its hyperactive energy. I came away really feeling the sense that what is happening in Berlin is almost a race against time, that the conditions which continue to make art practice so possible here, could disappear at any moment. The venue itself, which was incredible, is rumored to be getting torn down after the exhibition closes. The Temporary Kunstalle (when it was around) was just that, temporary, and the same feeling pervades this show. Whether Berlin will ever get its permanent Kunstalle is yet unknown, but for now, more fleeting snapshots almost seem appropriate for what is an ever-burgeoning, ever-shifting contemporary art scene worried about its own demise.