The supposed panoramic viewpoint of the Venice Biennale attempts to simultaneously transcend nationalism and promote diversity. In this all-encompassing wash, it’s hard to find a focal point for any kind of critical discussion that doesn’t follow prescribed rhetoric. But there are still out-of-focus areas, cracks in the gigantic institutional apparatus by which the exhibition runs. This is why, during our tour of the Giardini, I became anthropologically fascinated with an apparently under-considered aspect of the mechanism: the interns. The flight attendants of the Biennale. The secret purveyors of culture. For the most part, the interns are assigned to the pavilions of their nation of origin, with occasional crossover and double-duty where needed. It’s the interns’ job to usher visitors in and out of the pavilions, to sit at card tables and distribute tote bags, to volunteer information at random passersby, and to secretly convince you that their country is the best. 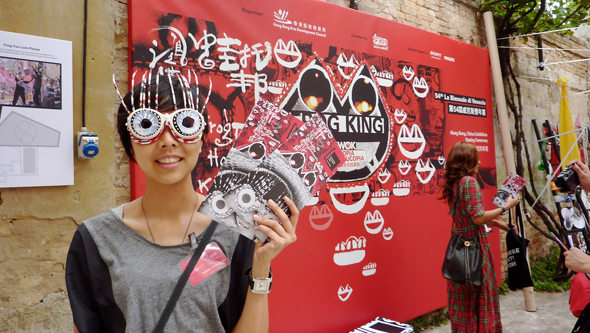 It was in the USA Pavilion, where the Art-Olympics have been literalized, that I became aware of the interns’ role as hidden cultural ambassadors. When it was time for the hourly USA performance, my friend and I stood waiting in the back of the room as the audience members came shuffling in. An eager-looking young man, decked out in Biennale flair, began to manically troll the performance room, nabbing people and asking them if they were going to stay for the show. Then he started circling and shouting a speech:

“The next performance is in a few minutes, but you shouldn’t exit the building because there might be a long line forming outside, and it could be hard to get back in! This time it’s going to be our female performer, but you should really stick around and see our male performer in an hour because it’s so interesting to contrast the two of them! The two performances are very unique…”

“If you are going to stay for the performance, please stand against the wall! If you don’t want to stand, you can sit in the middle of the room, but please don’t sit any closer than this distance, right here…”

“…because the performer needs space to move! If you are going to sit, please sit in the front so that the people behind you can see standing up! You are allowed to take as many pictures as you want, but of respect for the performer please do not use flash photography! My co-worker is going to repeat this in Italian! Please address any questions in Italian to my co-worker!” 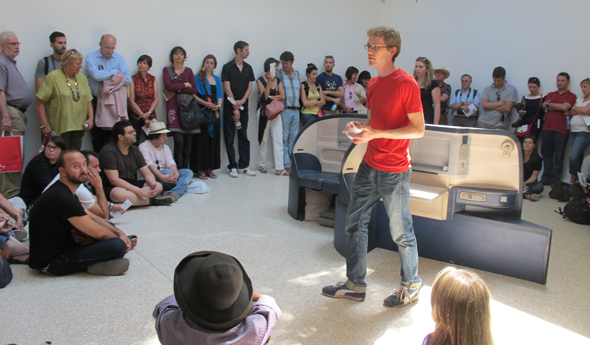 Biennale Intern directs viewers in the USA Pavilion, organized by the Indianapolis Museum of Art. Photo by Elvia Pyburn-Wilk

The young man and his female Italian-speaking counterpart repeated variations of this speech for about seven minutes, gesticulating and getting a little too physical with audience members. At one point, the young man actually grabbed a sitting woman’s arm and asked her to, “move just two inches to your right, no, no a little to the left. Back a little bit now…Ok, yeah, that should be ok, fine.”

Many audience members looked confused. Some laughed. I had flashbacks to years of girl scout line-ups, school performances, and choir concerts – the precise blend of friendly/condescending paternalism and tendency towards drama that constitutes American crowd control. The interns were on such a weird power trip that my friend and I were convinced it was part of the performance. We started speculating about how other countries’ interns would handle seating like this. Germany’s interns might have set up chairs beforehand.

The thing is, I immediately recognized the guy’s fervor. That type of pride, the possessive pronouns, and the eagerness could only mean one thing: Indiana. I grew up in Southern Indiana, and it’s not hard for me to spot a fellow Hoosier. Given that the USA show was curated by the Indianapolis Art Museum, this shouldn’t have come as a shock to me, yet it seemed surreal to get such a strong whiff of my “native” culture just then, in the global arena. It became suddenly tangible that, beyond all the irony that the USA artists were trying to lay on us, everything about the exhibition embodied an acutely American cultural viewpoint – even an American conception of irony – that I recognized and, unexpectedly, felt suddenly homesick for. Is everyone supposed to feel this way in their national pavilions? Is it indeed an implicit institutional goal to establish or reinforce connections between nationhood and identity? And through my participation in the performance, wasn’t I implicit in the process?

After the performance, I sought out the female intern (who turned out to be Canadian –??) and asked if anyone had been given any training or instructions on how to seat people beforehand. She said, “No, not at all – we’ve just been making it up as we go along!” I think it must be true that there was no covert performance going on. Yet, how incredible that this display of such perfectly-American cultural behavior was entirely incidental to the actual artwork! Rehearsed or not, this performance was the USA’s best one at the Biennale. 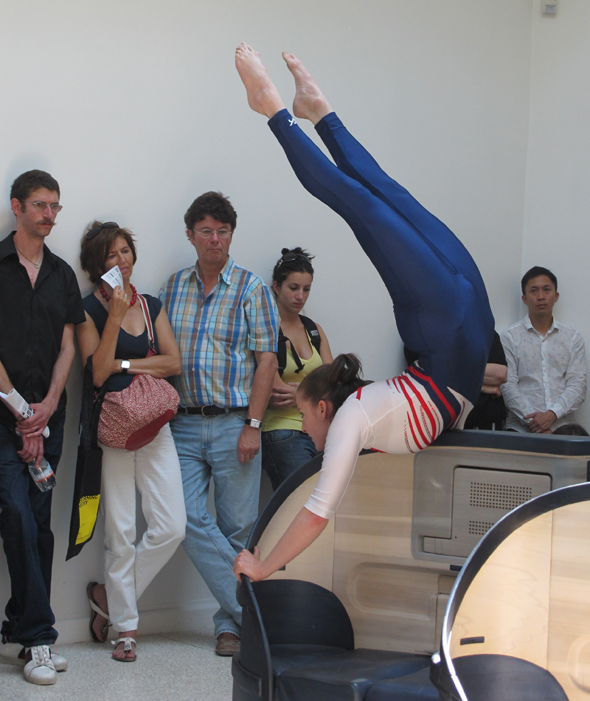 A gymnast performs in “Gloria” – USA Pavilion, organized by the Indianapolis Museum of Art. Photo by Elvia Pyburn-Wilk

Further intern case studies yielded fewer realizations. Most interns were sufficiently proud and excited and wanted us to think their pavilion (country) was great. The Japanese intern wanted to make sure we saw the artwork from every angle. The British intern intently convinced us that adequate safety precautions had been taken within the exhibition, “Just a few elderly people have tripped.” 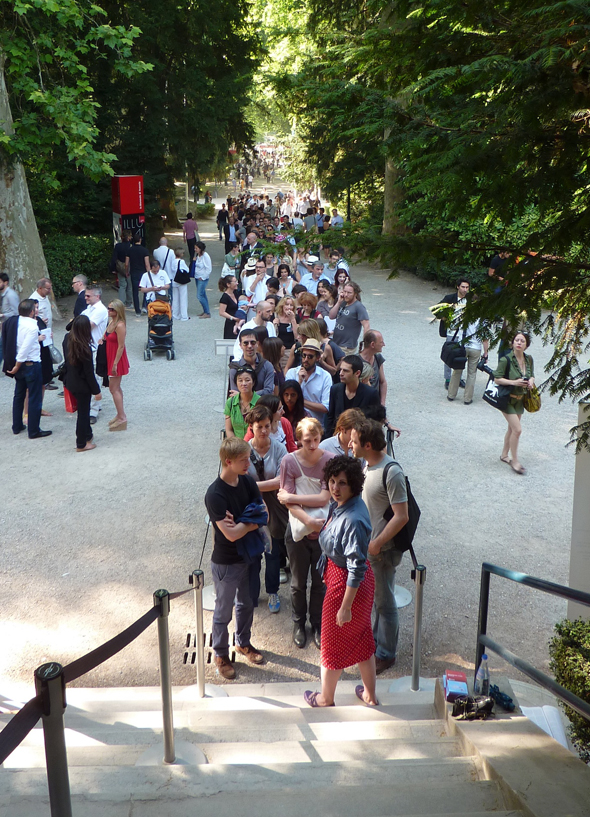 The Dutch intern begged us to take more press materials with us. Brazil’s intern seemed permanently off-duty. Though these differences are minor, and I am certainly not seeking to reinforce stereotypes of particular cultural behaviors, it continues to seem strange to me that the interns had not been coached in proper national representation. Yet perhaps, rather than revealing a fissure in the system of representation, are untrained representatives actually the perfect representatives?

Artists and curators invited to the Biennale face a near-impossible challenge of simultaneous national representation and critique. Ambivalence about how to deal with this form of representative politics can be read in the titles of several of the largest pavilion shows: Impostor (UK), The Inadequate (Spain), Egomania (Germany), and, on the other end of the institutional scale, actions by outsider groups like the Pirate Camp – The Stateless Pavilion, who pitched tents in the Arsenale during the press preview. Since the act of participation itself has become the subject of major critique, the very choice to participate in the Art-Olympics under a national flag is a problematic one. But clearly, participating in the Biennale as a spectator has its own pitfalls. As we know, a lot of work does its job by implicating the viewer as a co-conspirator. Thomas Hirschhorn’s “Crystal of Resistance” made me feel like an angry adolescent; I absolutely hated being implicated, even as a witness, in that piece.

Beyond audience implication, most of the Biennale’s most politically-acute work is well enough equipped to try and subvert, or at least address, its own institutionalization. For example, Spain’s “The Inadequate” is a summer-long sequence of staged events in which artists, curators, and critics become performers on a large stage, exploring “marginality as an artistic position.” The book produced for the exhibition states, “An artist is inadequate to represent a country, a country is inadequate to represent an artist.” The performances evolve over the summer, attempting to engage the audience in questioning the framework of a national exhibition. Whether or not this work is successful on every level — unfortunately it came across as inaccessible and didactic — I appreciate the choice it has made to use a wealth of institutional support in an investigation of the inadequacy of the institution to move beyond a UN Model of representational politics. Indeed, a global arts event is probably inadequate to say anything new about representation, when the structure of the event effectively reproduces the same old inequalities. 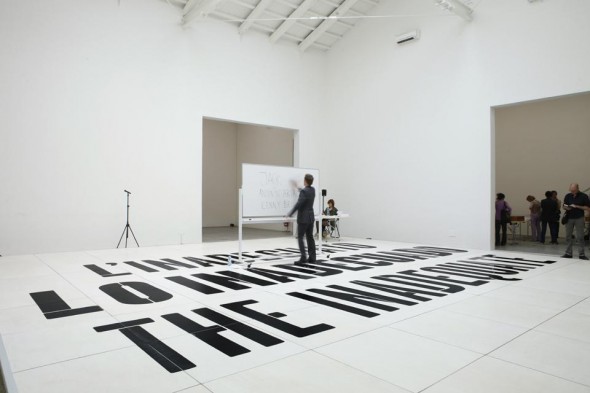 The disparity between funding of different pavilions is obvious and awkward. A trip up the rickety steps at the Bangladeshi Pavilion or a glance at the leaky ceiling at the Iraq Pavilion (the exhibition is aptly themed “Wounded Water”) is enough to point out the real inadequacies at stake. Three years ago, I remember watching an interview with swimmer Zakia Nassar, one of four Palestinian athletes who made it to the 2008 Beijing Olympics, who reported with excitement that the actual Olympic competition would be the first time she would get to swim in a full Olympic-sized pool. It was no surprise when she didn’t win her race. And, in some similar way, it’s no surprise that the Bangladeshi work at the Biennale is bad. But, worse, the Bangladeshi Pavilion’s aesthetic is overtly “political” in a way that empties it of any real agency. It’s a stark reminder of the difference between the aesthetics of politics and the politics of aesthetics. 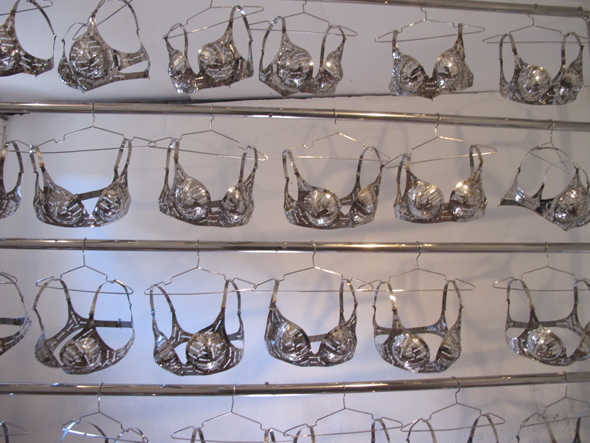 This is why one piece at the Iraqi Pavilion was particularly impressive. Adel Abidin’s “Consumption of War” is a five-minute movie in which two twin businessmen rip fluorescent lights down from the ceiling in a generic office-space, and begin battling with the long bulbs as if they were light sabers. The two identical executives make sound effects themselves, buzzing and humming as they fight, and eventually they smash each other’s sabers and end up in total darkness. The success of this piece suggests that a certain type of parody is perhaps the smartest alternative to the traps of victimization, exoticism, and claims of authenticity that artists representing underfunded and marginalized positions so often rely on. 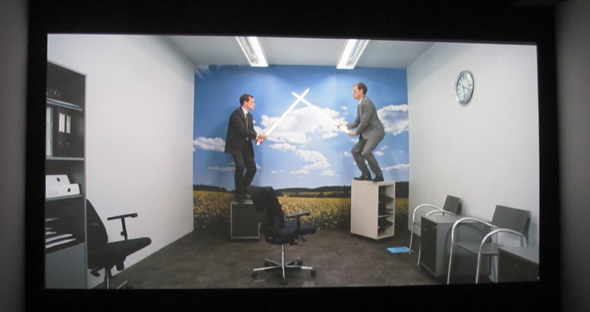 Nowhere was self-consciousness or parody more evident than at Venice’s recently-incorporated Internet Pavilion. It’s a common idea that the internet, which promises to transcend national-political boundaries, is shifting the discussion at hand by proposing new types of communities that represent themselves in entirely new ways. But given that the Biennale has been championing international communication through national representation for more than a hundred years, can the incorporation of another pavilion, online or otherwise, alter this trajectory? 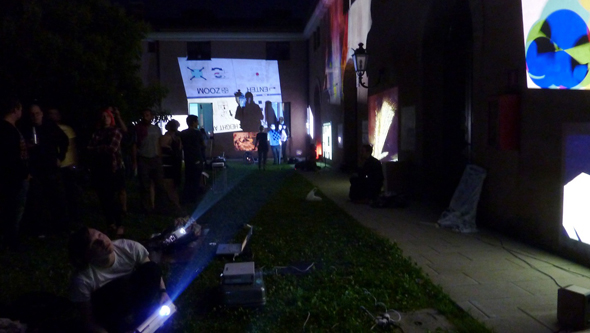 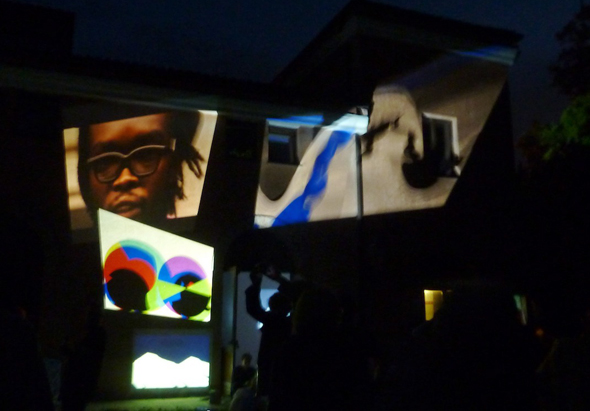 Elvia Pyburn-Wilk is an artist and writer based in Berlin. She received her BA in Sculpture from Bard College and is currently the assistant at Studio Lukas Feireiss, a multidisciplinary curatorial practice investigating the intersections between architecture and art. Elvia runs an experimental publication called EADERS DIGEST and her writing has been featured most recently in the book Testify! The Consequences of Architecture, which accompanies the exhibition by the same name at the Netherlands Architecture Institute in Rotterdam, Netherlands.
elviapw.com
eadersdigest.com