Today, modernity confounds the traditional creative process. Documentation has risen to a level of significance previously unseen, and questions linger about the importance of work being translatable. How easily can pieces be transformed into shared digital files from physical objects? Such queries have lead artist Rachel de Joode to sculpt real, perceptible objects that embody discussions about space.

The Oliver Francis Gallery in Dallas will open her exhibition Real Things today, Saturday, August 11th. The exhibition ponders the relationship between space and art objects– how intentional items interact with their surroundings. De Joode specializes in both internet-based art documentation, and also art-documentation as art in itself.

In addition to this solo show, Hanna Nilsson and Rasmus Svensson have designed the publication Real Things. The collection of essays dealing with space includes texts of: Graham Harman, Marisa Olson, Jennifer Chan, and Johannes Thumfart.

We had the lovely opportunity to speak with Rachel de Joode about her upcoming show in Dallas, Texas. 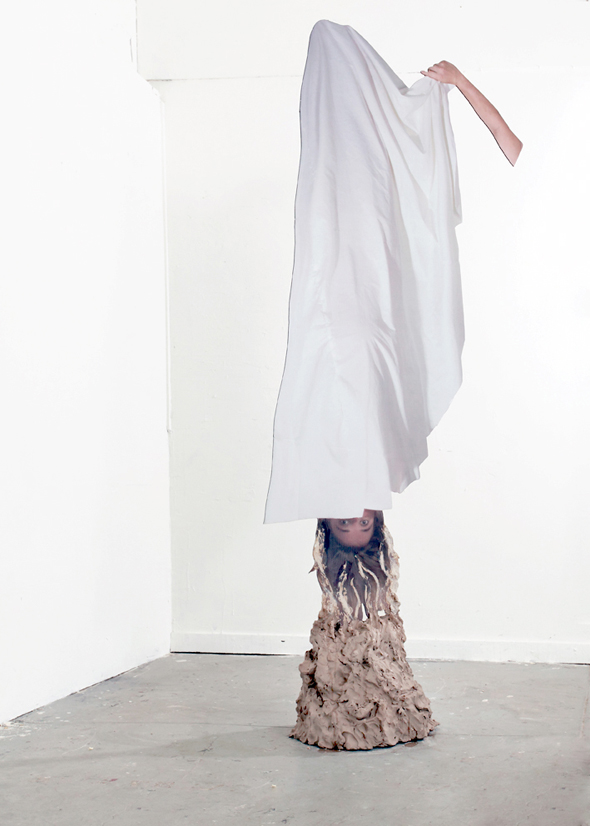 “Statue Being Unveiled: Myself Standing Upside Down in 2 Dimensions” (2012), 7-feet tall cutout photo, mounted, placed in a clay base

Anna C. Purcell: Where did the inspiration for ‘Real Things’ come from?

Rachel de Joode: The works in Real Things evolve from the experience of real objects in ‘”real space” in contrast to the experience of objects viewed on a screen. Recently, I have been working on the notion of space in relation to the art-object. Some works in the show have a more conceptual approach to the theme, other works have a more poetic approach.

My interest in 3 dimensional spaces can be directly linked to the evolution of my work. I have made many pieces where the documentation is the end-result, the photo of the installation or sculpture is the artwork. This process of art-making has been very useful for me, since I can use objects which are not archival (like for example cheese noodles or chicken feet) plus I can show the perfect angle of my work, in perfect light, the perfect context etc.

I guess, my work is all about documentation: the real object vs the documented object. For this show I decided to make things into ”real things’; things which the visitor can view from more angles, something to walk around, a thing which moves, things which translate the abstract notion of space. 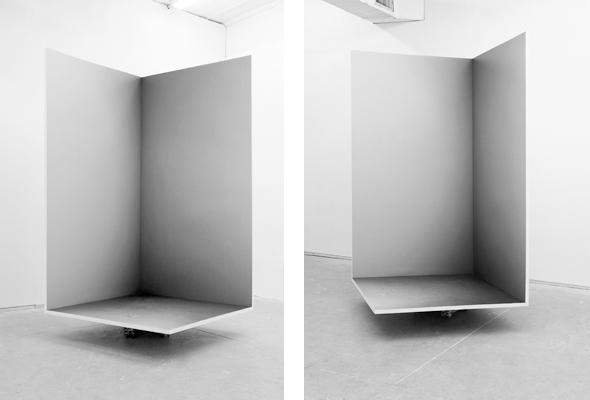 How do your sculptures reflect your engagement with your ideas about art and space?

The pieces that I’ve created for Real Things deal with (physical) space, the object(ness of) space, with 3 dimensionality, with art-documentation as the art piece, with the real vs. the unreal, with facades, with gravity, with time….

For example, I’ve made the work Corner In Space, a sculpture of a rotating and moving (life-size) gallery corner. This work is made out of Styrofoam and has 3 large-size printed images of a real corner mounted on them. These prints cover the entire inside of the structure of the corner sculpture. Underneath the structure is a robot that makes the piece move through the gallery space.

The corner itself is a symbol of space. The corner (three lines) is the mathematical model for representing three-dimensional space (- the Cartesian coordinate system). By building this corner, I created space as a thing, as an object; an object, which moves through the space itself. Also, I’ve made a “Faux Statue”, this work is called Statue Being Unveiled: Myself Standing Upside Down in 2 Dimensions. This is a 7-feet tall cutout photo, mounted, placed in a clay base.

This faux statue depicts me standing upside down, posing as if to be an unveiled statue. This work deals with the real and the fake and an attempt to defy gravity.

Another example, is the work Cosmic Latte* Crust, a sculpted pizza crust covered in “cosmic latte colored pigment”. The pigment has been custom-made by Golden Artist Colors, Inc. 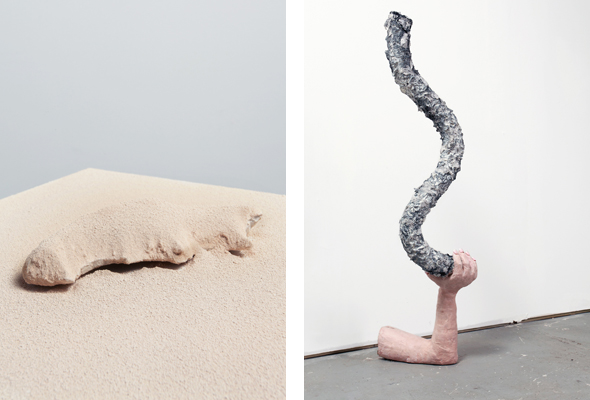 (Left)”Cosmic Latte Crust” (2012), sculpted pizza crust covered in “cosmic latte” colored pigment. (Right)”Dimensional Drawing Of A Real Arm Holding A Cigarette Ash Noodle”, An ash-swirl held up in the air by a papier-mâché arm. This sculpture is based on an automatic drawing, a scribble turned into 3-dimensions.

Do you think such discussions of space, documentation and art will become increasingly inevitable and widespread as time continues?

Yes, I think so, the access to the documented art-object is still growing and the way our digital life gets intertwined with our real life is in a constant flow of development. Real spaces, reality, things in real life and thus “art in real life” vs “the digital life” is definitely something our time has to deal with, think about and discuss.

Concerning art-documentation; what I find it most interesting is the way artwork is photographed and how this photograph turns the art piece in a sort of meme. It’s interesting how art is installed to photograph well for online documentation. Maybe in the future there will be more gallery-sets (like a Movie-set) which artists can rent to photograph work in, to give your work an “authentic gallery look”, without physically exhibiting.

I would like to quote Jennifer Chan, contributing writer to the publication Real Things to answer your question:
“The distribution of sculptural works will continue to rely on digital photography and image-sharing in the future. Even Duchamp’s urinal survived art after 1920– because Henry Stieglitz photographed it. If photography has the power to enhance the desirability in found object installations, perhaps photos of stacked and leaned things should be exhibited instead of found object sculpture (as they are already on the web). Large glossy lightboxes or full-wall prints of product shots will stand in for sculptural installation. On the other hand, if sculpture installation that simulates digital aesthetics offers an expanded and unrelated set of references away from the screen, then let it be indulgently theatrical.”

What differences do you anticipate in the responses of your Dallas audience as compared to the reaction of your followers in Berlin?

I have no idea what the difference will be, all the people I’ve met here in Dallas have been wonderful to talk to and have given me very positive responses! I guess there will be less people as opposed to having a show in New York or Berlin, but then I assume most of the people will see my work online anyway! 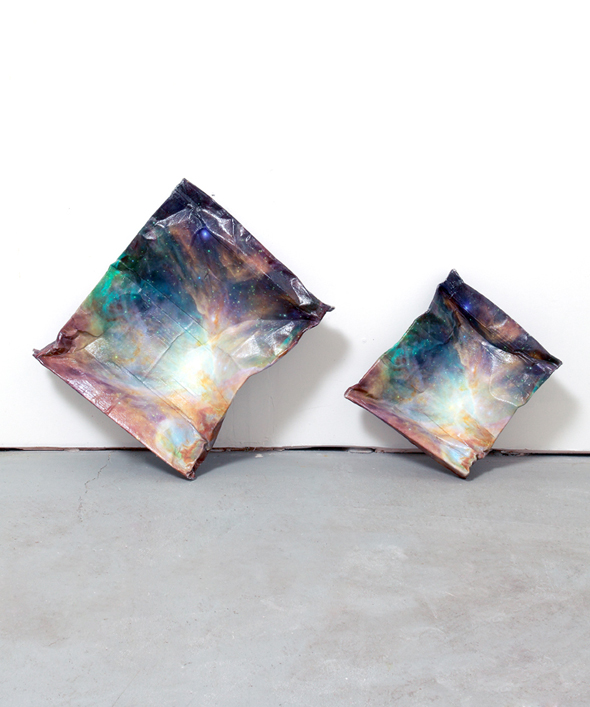 “Crushed Big Space-In-Itself ” & “Crushed Small Space-In-Itself”, 2 faux canvasses with an image from the Hubble telescope printed on it, the canvasses are wetted, deflated and covered in acrylic

* “Cosmic latte” is a name assigned to the average color of the universe, given by a team of astronomers from Johns Hopkins University.