BLINK is a series of micro-posts that will focus on individual artists. Honing in on select work or works, each post will be a fleeting snapshot of art activity from around the world, one that hopefully inspires and prompts deeper investigations.

There are not many Australian artists who can claim to be as dexterous as Peter Daverington. Daverington is a unique presence, mastering the painter’s palette and techniques, as well as being an accomplished Ney Flute player with acclaimed performances in the Great Pyramids of Egypt, Topkapi Palace (Istanbul) and the Metropolitan Museum of Art (New York). Influenced by his extensive travels through the Middle East, South America, Europe and the United States, his practice has steadily evolved over the last ten years to include an oeuvre of drawings, murals, sound installations, live recordings and more recently video. 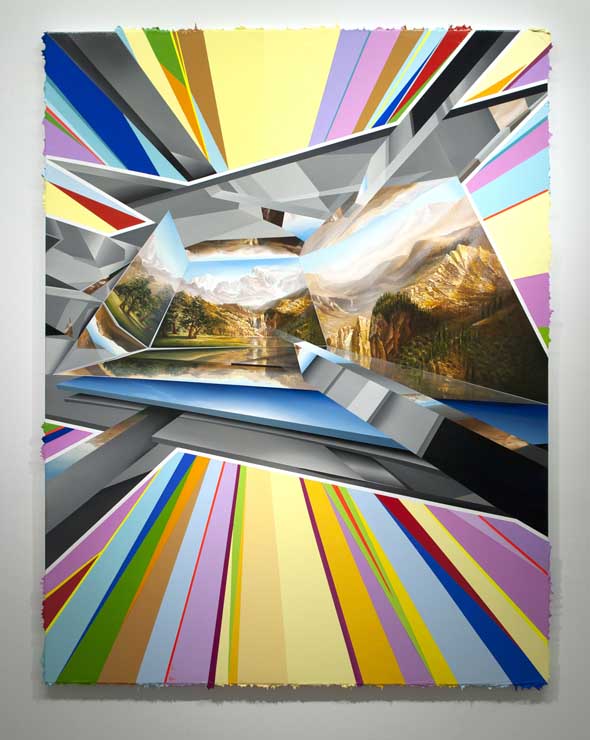 Peter Daverington – ‘Somewhere Over the Rainbow’ (2013), 207 x 157cm, Oil and acrylic on canvas: Courtesy of ARC ONE Gallery, Australia

The foundation of much of Daverington’s work lies in his skillful combination of geometric and architecture fractures mixed with finely rendered landscapes. His works are a courtship between the natural and the synthetic, and investigate contemporary cultures affinity to negotiate and simulate the environment through digital labyrinths of technology.

Since moving from Melbourne to New York in 2011, his works have taken a decidedly more optimistic palette. Somewhere Over the Rainbow, shown recently at ARC ONE Gallery, displays an assortment of candy-coloured rays rupturing a picturesque landscape painted in the tradition of Caspar David Friedrich and Albert Bierstadt. The razor-sharp beams of paint extend to the edges of the work, where luscious globs gather creating a texture on the otherwise glossy finish. For Davington, this work forms the apex of his career and consciously flexes his knowledge of art history as well as his painterly skills.