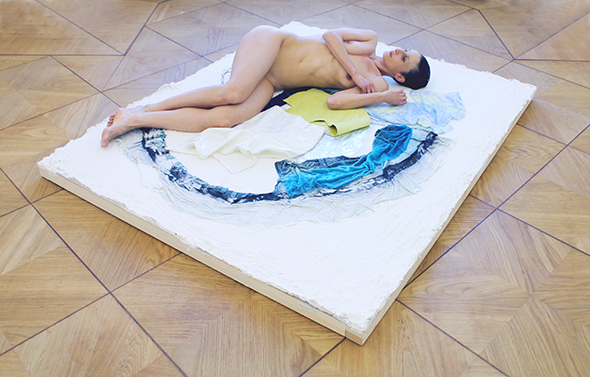 The KSF Project Space emerged when Hannes Schroeder-Finckh and Nick Koenigsknecht turned their spacious Brunnenstrasse apartment into a project space in order to justify living there, Hannes jokes with a charismatic honesty. The space is fresh and open ended: the goal is to put no limitations on the artist, who can use and transform the space in any way. Hannes admits playfully that his attachment to his floors was tested when artist Donna Huanca created a large plaster-and-cloth relief–Unearthing (Physical Form)–on the floor of the project space for her recent show, Maenad Cymbals. Huanca explains that it was hard for her not to engage with the space, which has the white walls of an independent exhibition space and the wooden floors and large windows of a living room. The livability of the space clearly reacted with Huanca’s desire to find some ground after years of restless travelling. Unearthing (Physical Form) introduces a new concept to her work: the impulse to cement mutable and ephemeral cloth into an immobile structure. 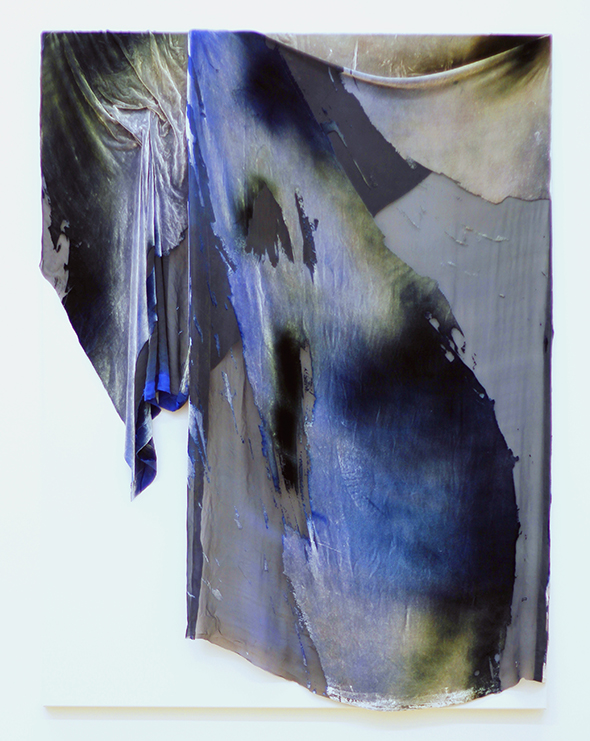 Transformation and time play a large role in Huanca’s work. Fashion is eternally changing and also always the same, cycling through previous styles with a masquerade of novelty. In response to the emergence of fast-fashion and easily consumable clothes, Huanca turns to used clothing to find traces of history and character. Clothes that have been lived in have life, which she tries to expose when arranging her totems and reliefs. She responds to the textures and shapes of the cloth–the way it has disintegrated through use, the way the fabrics engage with other fabrics–to create reliefs and human sized pillars of cloth. Huanca tries to catch cloth in motion–either strewn on the floor as if just discarded, or folded and twisted into tense shapes. Catching the cloth in action creates a sense of time, like the act of living in clothing creates history.

The opening involved a performance piece, and in some ways, the exhibition is not complete without the performer: a neutral to the point of androgyny nude female who placed herself in 30 minute motionless poses around or in the works. The contrast between the work and performer encourages the viewer to reconsider what they see as more alive: the active and historically charged cloth statues or the static nude figure. People are uncomfortable around motionless bodies, Huanca says, explaining that viewers will often be startled to notice the subtle shifting and breathing of a partly concealed body. This is particularly interesting in the context of the art-opening audience; usually well dressed, relaxed, talking, drinking, and moving around, this group is charged with a nervous energy in the presence of a motionless nude. 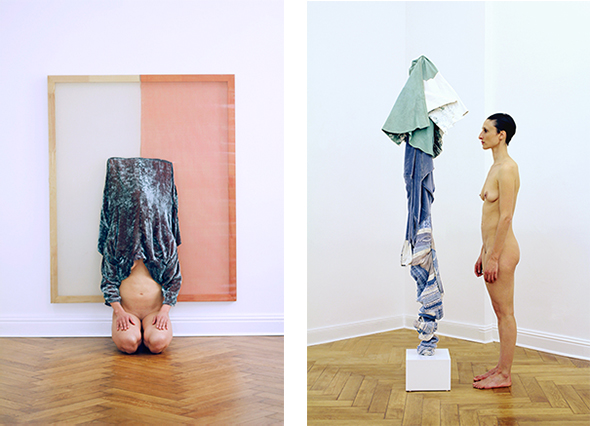 Kush Alien is part of a series of totem pieces, tall pillars of different cloths that are very tactile and approachable: the viewer immediately feels an impulse to touch and come close to the works. When the model took her pose beside the work, her nude presence commanded space and distance from the audience. What is the motive behind their reaction? Is it an empathetic response to her vulnerable and raw state? Or is the nudity oppressive to the viewer, confusing and strange? Or is it indicative of the way that fashion has changed our understanding of the body, a testament to the prosthetic role of adornment, which displaces the body onto the clothing to the point that we identify with clothing more than the figure? This last point seems most appropriate to Huanca’s works which seek to re-engage the viewer with the flesh body and also to find the body in the cloth, traces of life and action which no longer reside in the body but in its cast-off casings.