In a world of hierarchies and borders, art is a way of reeling in, containing this chaos, placing symbols in objects of sensual and ideological power. As a universality of forms, art integrates perspectives in exposing, studying, and perhaps explaining this peculiar state of things. Artist Nicky Broekhuysen’s works maintain a poignant understanding of visual forms and materiality in using 1’s and 0’s (her personal stamp of binary numbers) as a tool to propose questions of origins, communication, society, and order. In her current show, Potency Filled Things, Broekhuysen takes these concepts even further, drawing from a new form of inspiration––months spent in her birthplace of South Africa studying rock paintings by native Bushmen.

Walking into Potency Filled Things, the result of this research and Broekhuysen’s current show at Dittrich & Schlechtriem, is a bit like entering a private archaeology collection. Large-scale sculptural pieces and photographs are squeezed into the small space of just three rooms, yet arranged with an immediate sense of sensitivity. Artist Nicky Broekhuysen curated the exhibit, understanding better than anyone which ways her pieces would fit together. 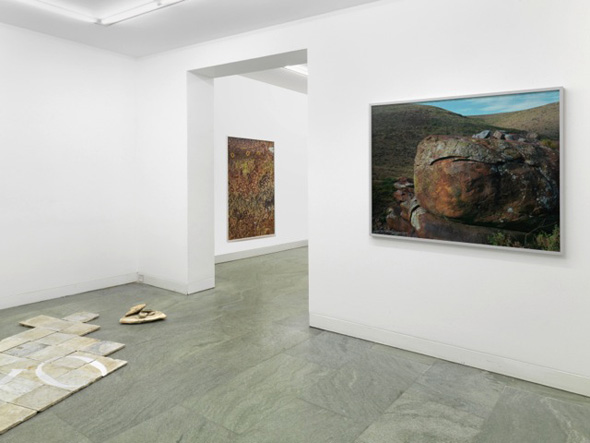 In light of her heritage, but also drawn by a personal curiosity intertwined with artistic themes of wider systems and structures, she returned to South Africa in March 2013. Despite enjoying a privileged upbringing during the Apartheid in South Africa, the process and resulting works are not laden with guilt; instead, they carry a certain feeling of curiosity, exploration, and admiration of the Bushmen people, a focus of Broekhuysen’s trip. Their rock paintings in the remote Winterberg region were a source of pleasure and interest since her first encounters with them as a child. In forming the very first traces of the DNA structure in our bodies today, the Bushmen are the origin of our society, and especially appropriate for Broekhuysen’s interest in the societal and cultural building blocks of past and present. For weeks she isolated herself in the mountainous place, observing, learning about the rock surfaces and the pigments used by these people. 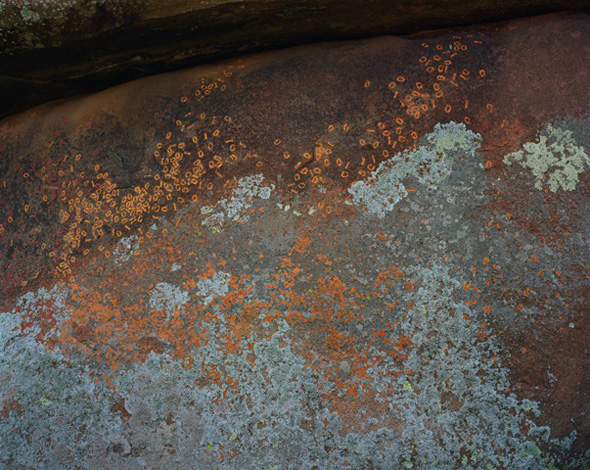 What at first appears as photographic documentation, the series Rock Painting Sites 1, 2, and 3 are also aesthetic moments of the barrenness of the environment, the disobedient surfaces of the rock upon which paintings weave, the red and ochre iron oxide pigments reflected in the surface on works in the surrounding exhibition. One can sense the force of the nature of this place that Broekhuysen must have felt, inspiring a new sensitivity to the material and her artistic intervention upon it. 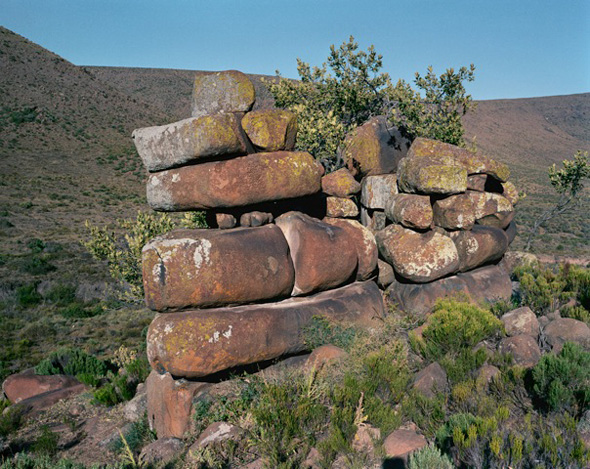 The use of red and ochre iron oxide is not only a thematic element that ties many of the works together, but was molded into a sculptural form for the work Over Time. For the Bushmen, pigment was equivalent to potency, the more powerful the pigment (obtained by mixing the iron oxide with animal fat or blood of the actual animal depicted), the greater potency of the painting. With Over Time Broekhuysen creates an endless cycle with this pigment, as the rock itself is the source of the pigment, splitting under heat and pressure and exuding the iron oxide.

Broekhuysen took this liquid and made it rock again, molding and firing it into small sculptural forms. Some surfaces are sanded and shiny, others show their raw color, the pigment becomes not merely a surface decoration, but the surface itself. 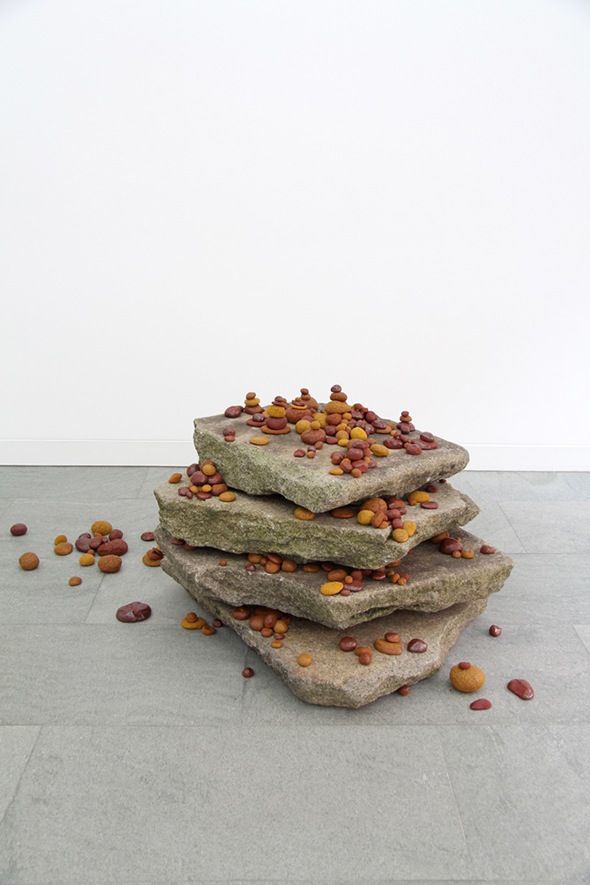 After walking around for a few minutes, I notice that I am consistently drawn back to the room with the floor tiles. Perhaps twenty of them pressed together, side-by-side. They take on an immediate and certain familiarity, their native sandy hue mimicking the facades on a stroll through Berlin streets. This is further developed by two nearby granite stones kissing corners, precariously leaning diagonally upon one another. Found by Broekhuysen on nearby Torstrasse, they were pried out of their previous contexts, lying still on a street, to be placed into the context of an art gallery.

This notion of context, of moving around and displacement is one Broekhuysen takes further as a metaphor for colonization in the marble tile work, cleverly titled Rise and Fall. As the stone acted as a doorway for the Bushmen, Broekhuysen also approaches the stone not as a solid surface but one that can hold layers of meaning, containing both the markings of history and additions made by the artist’s hand. The notion of intervention comes into focus as the tiles were taken from various villas, never belonging together until this moment. The scrapes of past usage, of heavy doors swung open and closed, of years of dirty shoes treading across, while engravings upon the surface by Broekhuysen add a further element of intervention. Marble calls upon images of ancient Greece, while Villas in Brandenburg from the nineteenth century bring to the surface a colonial history (Germany lost its colony in Southwest Africa after World War I). The layers intertwine and create interesting and puzzling relationships that cannot be accidental. 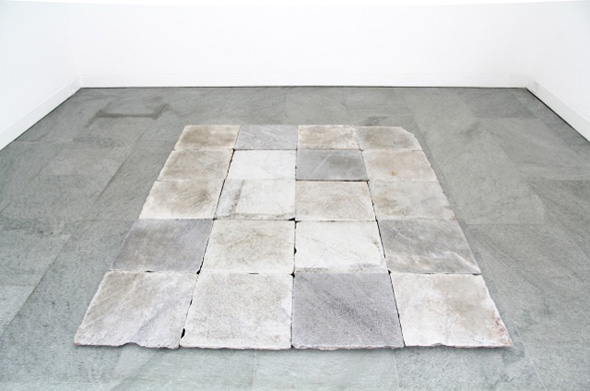 The aesthetics alone in each work of Potency Filled Things continue the strength of Broekhuysen’s previous works––of repetition in numbers, symbols, and questions of communication and sources. The works are also accessible at a purely visual level, as objects taken from a certain context and placed in that of art. By using familiar and tangible images, colors, and textures the works shift with the viewer and moments in time, just as history does in its layers of development. Drawing inspiration from a certain personal history, adding layers of political and cultural meaning, Broekhuysen asks small questions that develop into greater issues of borders and time that keep one thinking beyond the moments in the gallery space.