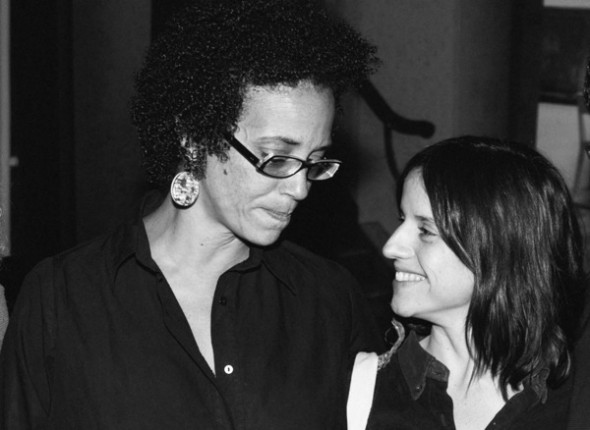 The winners, Coco Fusco and Renata Lucas at the Absolut Art Award, 2013

The biennial Absolut Art Award was given-out last Friday, September 20 in Stockholm. Unrestricted by age or geography, the award gives one artist and one art-writer the chance, and budget, to realise an expansive project.

The coveted Art Work category award went to Brazilian artist Renata Lucas, whose works often interact with pre-existing environments and architecture. The jury considered her application to “create a fragmented and dispersed new museum”, proposing that she will “subtly alter ordinary locations, so that her participants will encounter modified spaces and enter into altered states of understanding…” (from the jury citation). Lucas received a cash prize of €20,000 and a budget of up to €100,000 to realize her proposal for a new art work.

This year, the award expanded to include an Art Writing category, given to New York based writer Coco Fusco. Described in the jury citation “as a leading voice in intercultural theory and practice since the 1980s”, Fusco proposed a publication analyzing recent performance practices in Cuba. As well as the cash prize of €20,000, Fusco will have a budget of up to €25,000 to publish and distribute her book.

Jury President Carolyn Christov-Bakargiev, Art Director of last year’s DOCUMENTA (13), selected a jury of other notable curators and artist Susan Hiller to make their selections from a short-list of five nominees per category. At the start of the press conference, Christov-Bakargiev made it clear that the all female jury was not an issue worth discussing at length, after all, we would never think to question an all male jury.

Berlin Art Link was in attendance at the award celebrations in Stockholm, where we ate fine Swedish fish, had our photos developed in a make-shift darkroom and watched in amazement the over-the-top but highly entertaining performance of artist and vocalist Johan Jonasson (a member of the band Man Tear). Now we look forward to seeing what comes out of the two exciting new projects being funded by the award in the coming year.