A new series of black ink on paper drawings by Kevin Lucbert is mounted on the wall of his studio near Schlesisches Tor. It’s part of a selection process: seeing the full series as though hung salon-style in a gallery affords him the aesthetic distance to decide which drawings will make the final cut. That being said, the majority of Lucbert’s works are published – in printed books or online – rather than exhibited in a traditional gallery space. 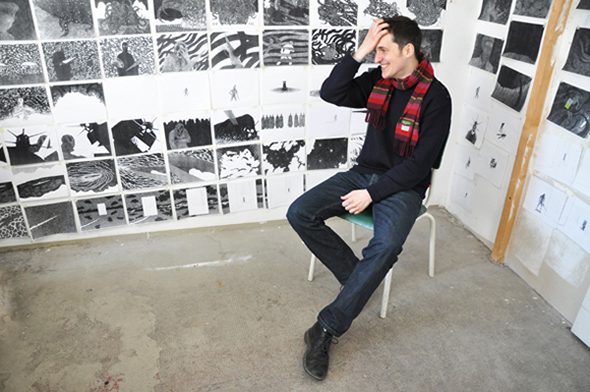 The series he is currently working on, titled La Traversée, reflects on the well-known 19th Century novel Heart of Darkness by Joseph Conrad. The scenes in his storyboard layout, like the narrative itself, are dark: a shadowy man rowing a boat through a dangerous and leafy abyss. Parts of the drawings are cut out to create tangible reliefs, contrasting the wooded foreground to the watery scene behind. 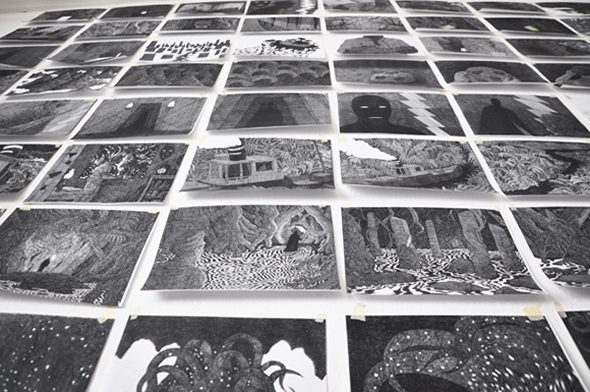 But this is only one side of Lucbert’s multi-faceted aesthetic. He studied Illustration at the Arts Décoratifs (ENSAD) in Paris and his final diploma project was a film collaboration with fellow Berlin-based artist Edouard Baribeaud. Eventually, Lucbert decided the commercial side of illustration (graphic design) was not his main interest and began to focus on his art practice. 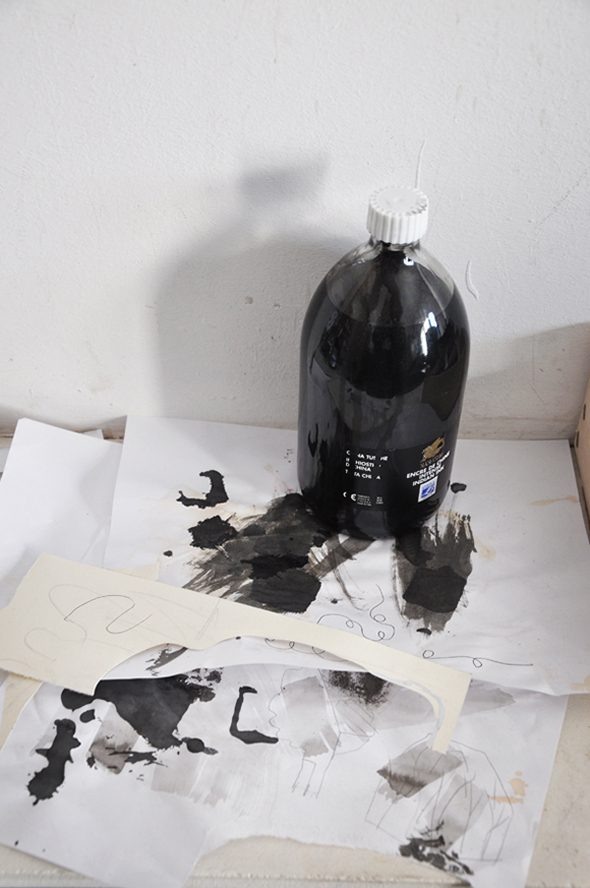 He shows us some of his more playful works, completed and published as part of a three-person collective in Paris, Ensaders. Each drawing is done by all of the members, working on the principle of accumulation. No space remains unfilled and some of the images begin to resemble a Where’s Waldo? book. On occasion, drawings are connected to current political events, like one reflecting on the Occupy movement called ‘We Are the 99%.’ 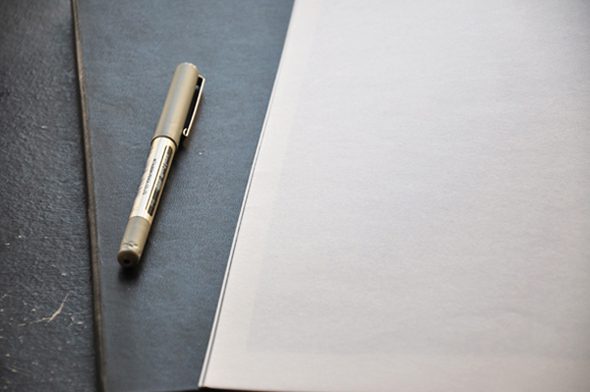 Lucbert’s book Mountain Fire illustrates many of his creative concerns, imagined in a surreal, almost Lynchian way. The drawings pull together architectural elements of a remote cabin, its wooded doors merging seamlessly with the forest floor. The final image in the book, “the Dream of the Whale,” was based on a real dream of his, Lucbert tells me. It’s a haunting drawing of a whale beached inside a cabin, its tail and fins poking out the door and windows, almost as though it’s wearing the house as a shell.

We move to the computer in his studio to see an animation he made in 2011, Wald. The caption describes it as “un voyage rêvé et sombre inspiré de promenades dans la forêt normande” [a dreamlike, somber trip inspired by walks in the forests of Normandy]. 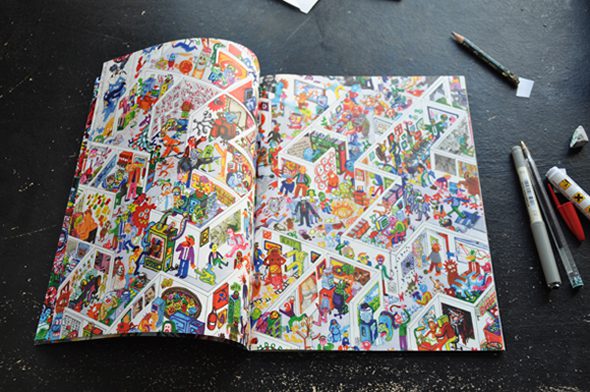 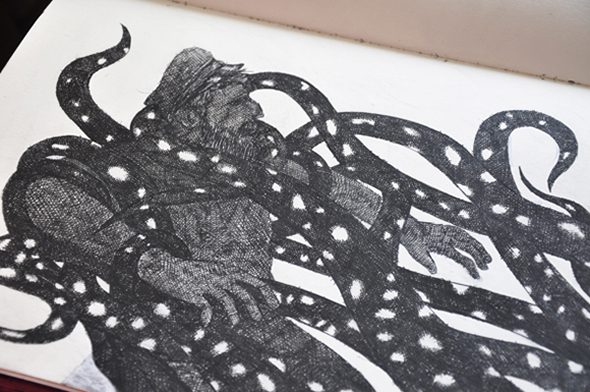 In the near future, Lucbert tells us he plans to do more large-scale comics – like the ones he has published in the Mon Lapin collection. A recent comic, printed in the November 2013 edition, unravels the story of a car crash. A conversation occurs between a victim of the crash and a possible authority, but we never see any characters. All the events happen within the spoken narrative, while the images depict open and chaotic scenes in the woods. 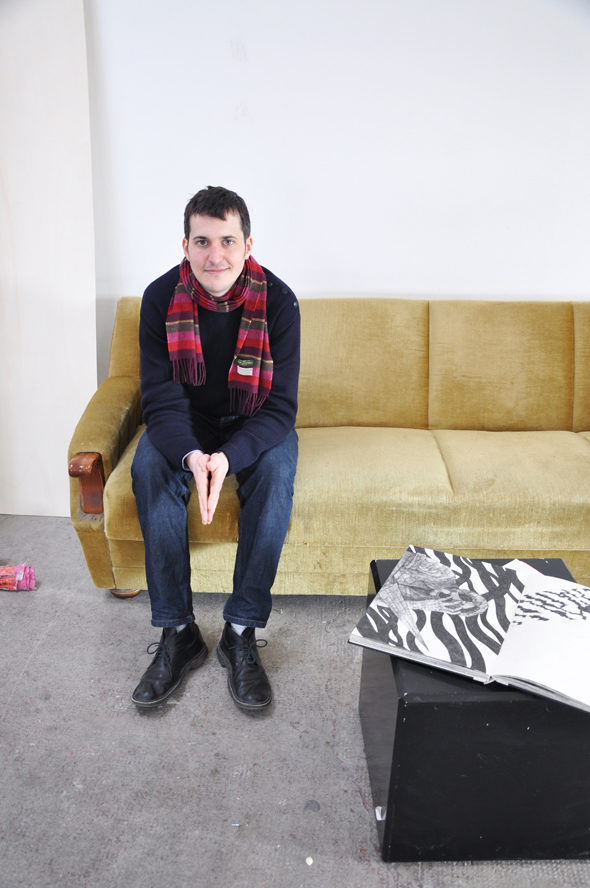 Lucbert’s solo work and his collaborations with other illustrators have allowed him to develop a rare talent for translating complex narratives into a fittingly intricate, often viscerally evocative, visual language.

Alison Hugill completed a Masters in Art Theory at Goldsmiths College, University of London (2011). Her research focuses on marxist-feminist politics and aesthetic theories of community, communication and communism. Alison is an editor, writer and curator based in Berlin. www.alisonhugill.com