It’s challenging to arrange a studio visit with a collective of architects (ranging from 8-10 active members), all working on different international public space initiatives, in an office with a self-avowed non-hierarchical working schema. The biggest challenge being the seemingly contradictory nature of the request: raumlaborberlin’s projects are diverse, ranging from participatory building workshops to exhibition design to performance-based urban interventions. For the most part, their work happens in public. Their projects are often temporary, and usually involve an ever-rotating cast of eager participants. 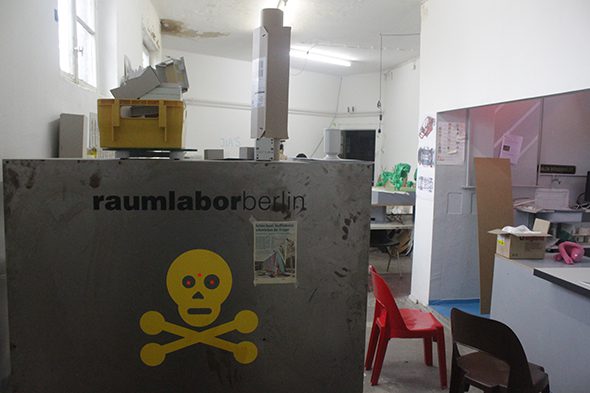 Though not all members agreed to the studio visit idea (a consensus is hard to reach), there seems to be a shared notion about the importance of self-critique that needn’t halt their process, but could rather be integrated in a useful way. Over the years, raumlabor has become adept at this level of thinking and the integration of dissenting voices is often what propels their projects into new and interesting territory. 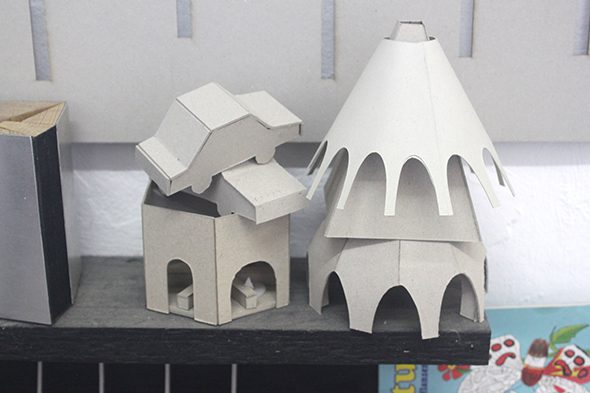 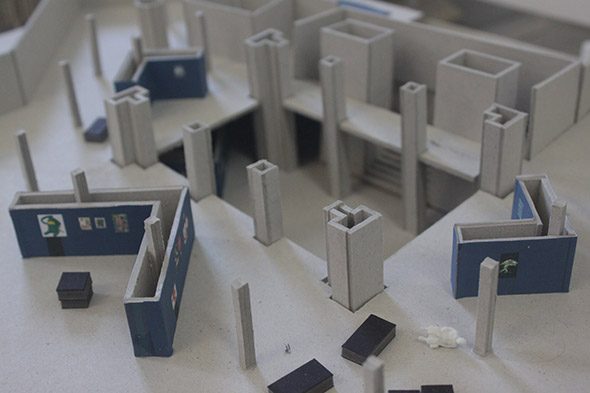 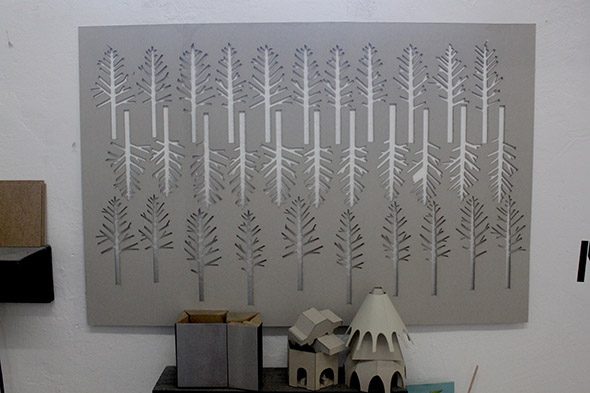 The Kunstfabrik am Flutgraben complex in Treptow is gearing up for summer right now: Mitte’s famous “White Trash Fast Food” is setting up a satellite location there, the Badeschiff has opened their Spree-side manmade beach for the season, and a new club has just been launched across the Landwehrkanal from the renowned Club der Visionäre. With a year-round flea market and multi-purpose arena, this cluster of old warehouse buildings also manages to house an impressive range of art and architecture studios, residencies and small exhibition spaces. 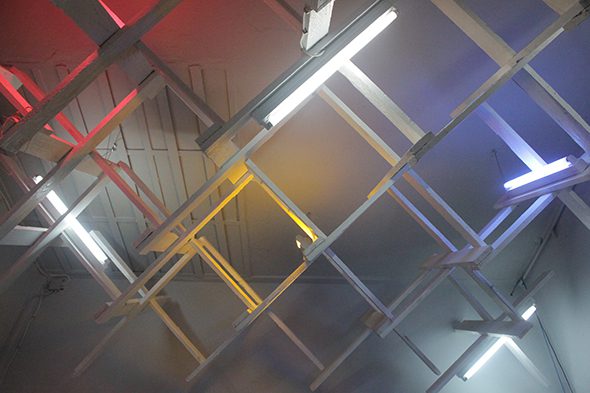 raumlaborberlin’s office is on the top floor of one of the buildings, with roof access that provides a panoramic view of the Spree. One of the young architects working in the office, Samuel Carvalho, gave me a tour around the place on a Friday Feierabend. As with most architecture offices, the model making area is in characteristic disarray, with materials of all sorts lying ready to be mobilized in the design process. Yet the majority of the in-house design seems to happen in the office area, where there is no assigned seating and senior architects and interns alike are thrown into a potential new configuration everyday. It’s this kind of unpredictability, enhanced by the opportunity to work outside in public spaces around the world, that makes raumlabor an attractive option for architecture students seeking work experience in a non-traditional office environment. 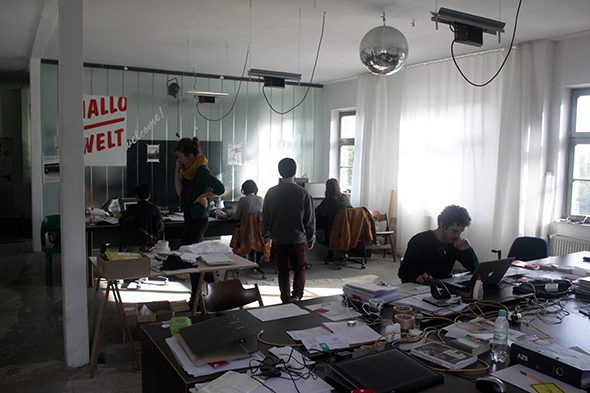 It also inspires similar initiatives from those who have been a part of raumlabor in some capacity, since the office grew out of a relatable youthful curiosity and drive to find new ways of interacting with the city. raumlaborberlin was founded in 1999, in the context of their contribution to the exhibition Linie 8 – Positionen junger Berliner Planer, which focussed on activating certain sites along the U8 underground line. In the 5 or so years that followed, the group solidified into eight members – a strong mix of recent architecture graduates who saw the creative advantages of living in one of the most fertile cities in terms of potential urban transformation: Francesco Apuzzo, Markus Bader, Benjamin Foerster-Baldenius, Andrea Hofmann, Jan Liesegang, Christof Mayer, Matthias Rick, and Axel Timm. Berlin has changed a lot since then, with unprecedented waves of tourism and the always amorphous “gentrification” threat looming, but raumlaborberlin have been at the forefront of enacting some of the city’s most exciting projects. 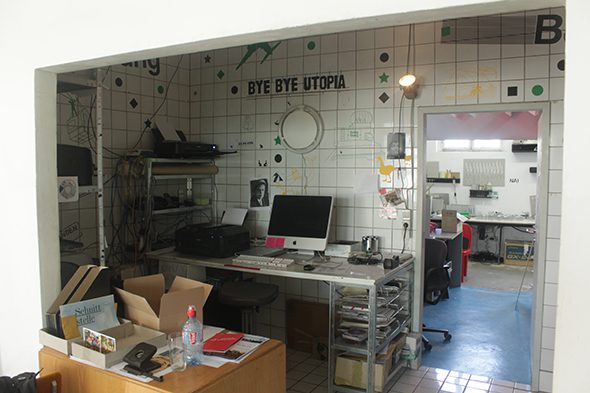 For example, they were involved in the “pioneer” phase of Tempelhofer Feld’s transition from airfield to public park. Their biggest contribution, together with landscape architect Klaus Overmeyer from Studio Urban Catalyst and Michael Brown and Partners urban planners, was introducing the idea to open the park for common access. After the opening in 2010, raumlabor helped introduce a series of public art and performance events on the site, such as the KNOT project in 2010 and Die Grosse Weltausstellung in 2012. On their website and elsewhere in interviews, members of raumlabor have weighed in on the current debate over the fate of Tempelhofer Feld, to be decided at the upcoming referendum on May 25th. 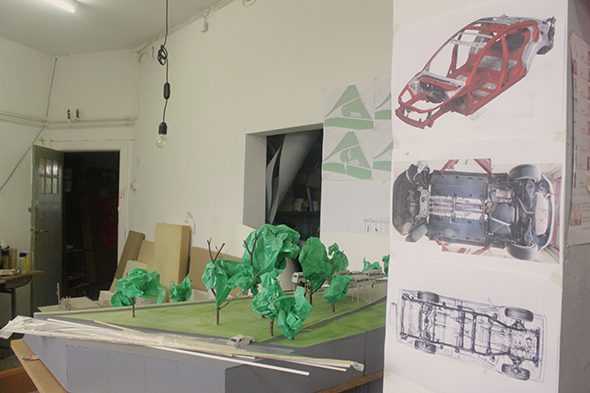 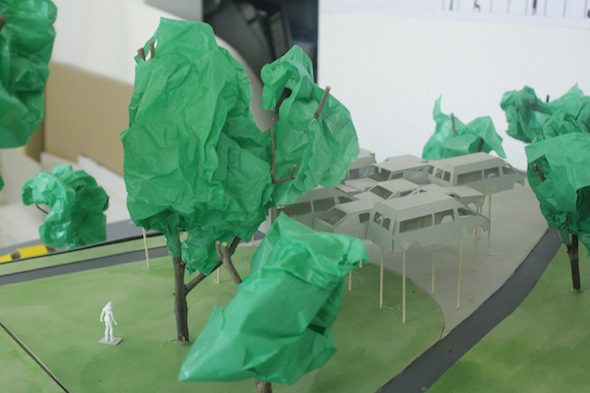 Recently, raumlabor has accomplished a profusion of exhibition design projects. From their Nomadic Furniture 3.0 design at the MAK in Vienna last year to the more temporary construction for Art Hack Day, a 48-hour show presented at the opening of this year’s Transmediale, raumlabor has increasingly been putting their DIY skills to work in the art world. During Gallery Weekend in May, they designed the Portrait Gallery exhibition space for Pictoplasma‘s 10th anniversary festival.

This week, raumlabor is working on a project in Mannheim, in cooperation with the Theater der Welt 2014 called Hotel ShabbyShabby. The premise of the workshop, for which a competition was held last year that garnered 20 participating groups, is to design ideal “hotel rooms” that will be constructed out of the city’s trash and installed at select locations throughout Mannheim. 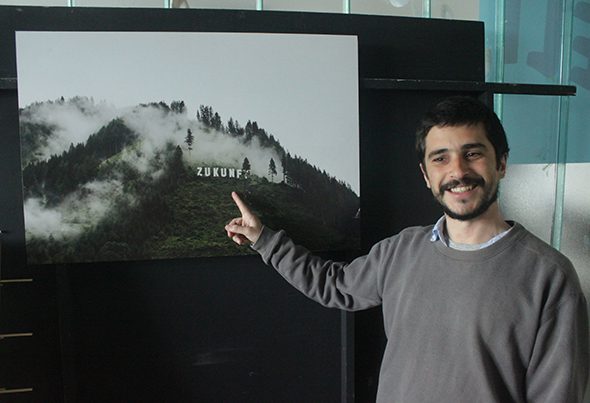 During my visit to raumlabor’s studio, one of the founding members, Jan Liesegang, spoke to me about an upcoming summer school he is curating in Darmstadt. Echoing the impetus behind many of raumlabor’s projects, Liesegang described the larger aim of the summer school: “The Osthang Project opens an interesting discourse. We try to connect this movement of experimental building processes – building things yourself as a kind of empowerment strategy, which also partly happens on Tempelhofer Feld – with a boarder perspective on how we can develop alternative modes of living together. Because we all have this prominent notion of crisis and the idea that the existing late-capitalist system is not really leading us in the right direction.” Raumlabor has invited 9 groups of established architects and artists to act as tutors for the summer school, and are accepting applications for the program until the 25th of May.

While a lot of the collaborative concepts behind raumlaborberlin’s projects are conjured up in their office space, it is clear that their work is best tried and tested in the field. In this case, the “field” is decidedly urban and their spatial initiatives try to interact with contesting views of how public space should or could be used. raumlabor’s early motto “No Trust, No City” gets at the heart of their approach: exposing designs to public opinion and participation is a risk that architecture rarely takes, but when it becomes a crucial aspect of the design process, it can yield extraordinary transformations in terms of people’s relationship to the city in which they live.

Alison Hugill has a Masters in Art Theory from Goldsmiths College, University of London (2011). Her research focuses on marxist-feminist politics and aesthetic theories of community, communication and communism. Alison is an editor, writer and curator based in Berlin.