During Gallery Weekend, London-based artist and designer Marguerite Humeau opened her solo exhibition Echoes at Duve in Kreuzberg. Following her acclaimed show Horizons at Import Projects last fall, Humeau showcased a similar display of sonic sculptures, this time enhanced by a captivating tale of historic proportions. The walls allegedly covered in ‘Black Mamba’ venom from a Floridian laboratory, the gallery glows with a neon green hue. We caught up with Humeau to discuss the research that goes into her complex works, and her inspirations both mythical and scientific. 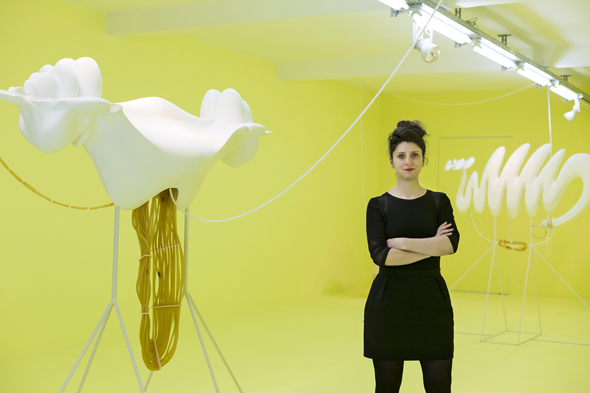 Alison Hugill: Your works have a strong link to biology and require in-depth research on your part. How do you approach your art practice as both scientific study and visual/aural construction?

Marguerite Humeau: It always starts with a mystery. My research process is for me a bit like a performance: I become a heroine on a quest to resurrect prehistoric creatures, to communicate with alien beings, to revive extinct languages from Cleopatra’s times… like an Indiana Jones in Google times. During my odysseys, I usually have to write to various experts (palaeontologists, zoologists, conspiracy theorists, shamans, linguists, etc.). They help me to find some clues, but there are always gaps in knowledge. This precious advice is then intertwined with speculations or fictional stories. Scientific advice is a medium for me, never an end in itself. It helps me to make my stories believable and not completely fictional – it makes the stories more ambiguous. Then, the key is to find the best way to translate the story into a strong physical and sensorial experience in the gallery space.

AH: What role do sound and the voice (both human and creaturely) play in your work?

MH: I started to work with sound in my project The Opera of Prehistoric Creatures. I was interested in how the voice can actually physically bring a being back to life. As I am interested in supernatural events, and the question of presence (be it a living thing, a ghost, an apparition, an ectoplasm), I started to investigate the correlations that exist between supernatural events and communication technologies. There are actually strong links between the two, as Jeffrey Sconce explains in Haunted Media. For example, Bell invented the telephone because he had promised his brother that when one of them died, they would find a way to communicate together. So he invented the telephone. Similarly, after Morse invented the telegraph in 1848, the Fox sisters in New-York started to elaborate systems that they called “celestial telegraphy”, in order to communicate with a ghost that was haunting their house. The disembodied voice in itself could be considered as supernatural, although we are now used to speaking to “voices” with our communication devices.

I have now finished my trilogy that was dealing specifically with communicating with worlds or beings that are either extinct, unknown, or not accessible. It started with The Opera of Prehistoric Creatures, a quest to resuscitate the sound of prehistoric creatures; then with The Things? – A Trip to Europa, a proposal for communicating with outer-space creatures, and finally with Requiem for Harley Warren ‘Screams from Hell’ that premiered at TBA21 Thyssen Bornemisza Art Contemporary in the group show Rare Earth in February. Now I am exploring the idea of disembodiment and its supernatural potential in different ways. 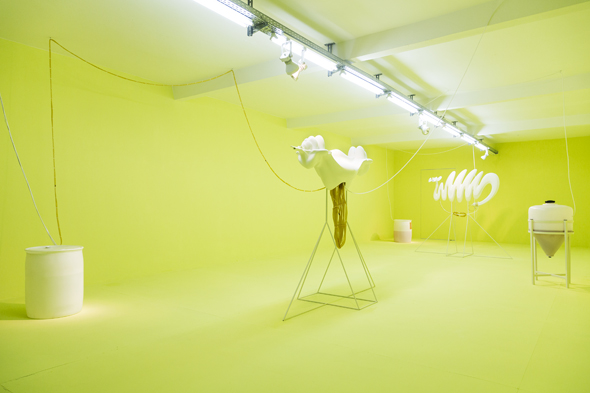 In my current show at Duve, the walls have been covered with Black Mamba venom. The show is also partly dealing with disembodiment and the various forms that life can take. In the exhibition, there are two hybrid creatures that have been inspired by Ancient Egyptian gods. They are engineered to produce elixirs of life and antidotes. ‘King Cobra’ is still relatively figurative, ‘Taweret’ is already more abstract. They are both sculpted in a white material, and therefore fade away in the show, they become almost unreal, like strange apparitions.

There are also liquid beasts: one of them is ‘Muhammad Ali’, an alligator capable of producing “super blood” on an industrial scale. Black Mamba is also present in a show in a liquid form (the paint on the walls). I am interested in pushing the borders of what life exactly is and what it becomes when it is engineered for specific purposes. Animals in the show range from slightly figurative to completely abstract.

AH: Your current exhibition Echoes deals a lot with questions of regenerative medicine and biological engineering. Where does your fascination with resurrection come from and how does it manifest in your work?

MH: More than resurrection, I am interested in transitions: from life to death, from mineral to animal, from inorganic to organic. What is life, and how does it manifest?

AH: What are the inspirations for your complex works in terms of other artists / literature / myths or recent scientific discoveries?

MH: One important source of inspiration is Thai cinema and in particular Apichatpong Weerasethakul’s films. In Uncle Boonmee there are many strange beings, ghosts that appear on screen. I am interested in how Weerasethakul shows these supernatural manifestations without any digital effect.

Of course I also watch a lot of documentaries – recently on the discovery of Tutankhamun’s tomb by Howard Carter in 1922. What I really love is also digging up stories by interviewing the various experts that I am working with. Then I really get to talk about stories that would be impossible to find online or through research… for example, I had an extraordinary discussion with explorer Bernard Buigues in 2010. He goes every year to Siberia to discover prehistoric bison, mammoths, rhinos, that have been frozen and kept intact in the ice for thousand of years. He told me how it felt to be facing a body, complete with its flesh, bones, hair, that used to live thousand years ago.

I also have a fascination for ancient sites, especially memorials or sites that were dedicated to the passage from life to death (or to transitions in general).

AH: As a woman artist working at the crossroads of art, science and technology: do you find that the research you undertake lends credibility to your artwork or, conversely, is the artistic nature of its outcome a hindrance to the more academic/researched aspects?

MH: The research gives credibility to my stories. As I mentioned I use scientific facts but also and more importantly speculations and fictions. I want to create strong physical, almost supernatural experiences, and I hope to bring my audience with me in the meanders of the imagination.