In this series, Artists In Transit, we speak to artists who are passing through Berlin as part of residencies, collaborations, or exhibitions, and explore international and multi-cultural perspectives on the city as an art space.

Scott Kildall is a cross-disciplinary artist working in the barely tangible realm of new media and visual data art: he writes software code, which transforms data sets into 3D sculptures and installations. Currently residing in San Francisco, California, we caught up with him while passing through Berlin for his most recent project Machine Data Dreams, and discussed creative spaces, inspirations during his travels and what keeps drawing him back to the city. 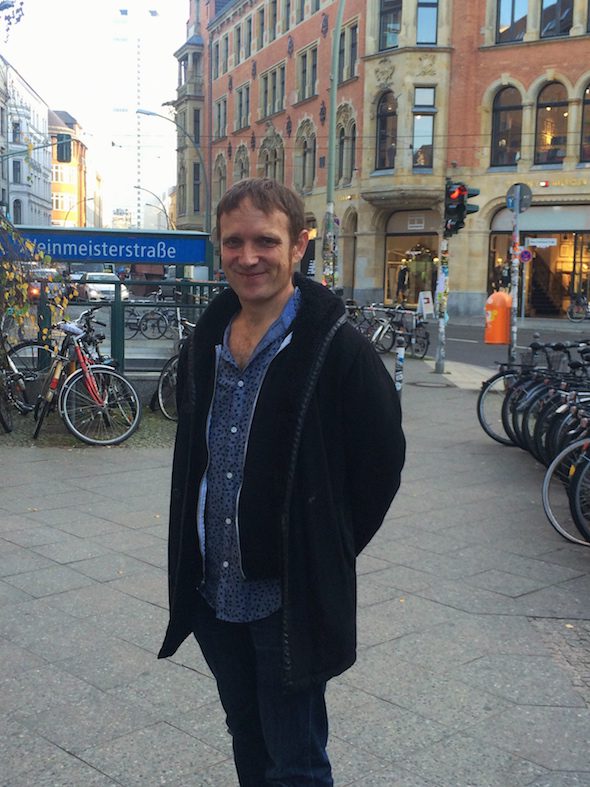 Berlin Art Link: What brings you to Berlin?

Scott Kildall: I was in Amsterdam for a conference last week, and Berlin of course is really close. It’s a city that I come back to every couple of years. I have a lot of friends here. This time I am collaborating with Michael Ang on a project called Machine Data Dreams and we’re looking at how machines have infiltrated our lives. I’m not talking about phones or laptops, but I’m thinking more about coffee machines, refrigerators, cars and so on. In our homes we have up to 30 computers doing various things, and I’m interested as to how these machines work in synthesis with our own lives, trying to give them form and personality and really paying homage to artificial intelligence. Yesterday we were in a studio writing code and doing prints all day, so I wasn’t experiencing very much of Berlin.

BAL: Your work is mostly digital before turning into physical collaborations and installations, so you could work from anywhere. Does traveling influence your work?

SK: I travel and also do site specific projects. For example, last year I worked on a residency in Utrecht in The Netherlands for two months, on a project called EquityBot, which is a stock trade algorithm based on human emotions. It uses the eight different core emotions taken from Twitter: sadness, joy, anticipation, fear, surprise, hate, anger and disgust and through a set of algorithms, correlates those to stock prices, before making investments into a simulated bank account. The idea behind it is to see if an artist, who is not trained in mathematics, could make some money in the stock market.

BAL: Where did the idea come from?

SK: About six years ago, I was on a weekend trip with some friends, near the beach, and we were kind of ideating about writing an algorithm to do stock trades. Of course, when I went back home, I found out that people have been doing this for years, so I wrote my own, using existing tools and Impakt Works in Utrecht picked it up. The Netherlands was the ideal place for it, because Amsterdam was actually the first site of the Stock Exchange back in the 1600s, so there is a strong historical precedence. Right now the Equity Box is making an 18% rate of return, which is crazy good, a really well-performing investment manager might get about 7% rate of return in the current stock market.

BAL: Do you usually have ideas when traveling or in transit?

SK: A lot of times you have the seed for an idea and those come up wherever, but usually not in a daily environment. At home, you wake up, do your emails, send out proposals, hop on the subway and get off at the same spot as usual, so your mind gets locked into a certain patterned way of thinking and it’s efficient for production and getting stuff done, but it’s not a great way to find new ideas.

BAL: How do you spark your creative brain?

SK: I think new ideas are found in three different spaces: in art galleries and museums, taking yourself out of your daily life and looking at new work. The second is having these retreats, not too far from home, where you have time and space, and the last one is traveling to really urban spaces.

But if I go to a new city, like Berlin for example, I find myself in a situation where my phone might not work, and I have to re-route myself and I see all these new patterns; it’s kind of shaking your mind loose. And when you don’t worry about day-to day life stuff like paying the bills, you have a lot more time to get lost. I start immersing myself in new thoughts and ideas, thinking about things from a sideways perspective.

BAL: How does Berlin compare creatively to San Francisco?

SK: I’m here working with Michael, who is definitely tied into the hacker community in Berlin, and in a lot of ways that community is similar in different cities. You have similar conversations about the possibilities of 3D printing; with just slightly different nuances because of the different urban spaces they’re in. I went to a Hackerspace here four years ago during transmediale and it was completely punk rock and ghetto in a way that was crazy wonderful. Giant cold warehouses, everything is dark and spray-painted, something you wouldn’t see in the US, because those spaces are usually tied to cities with a strong tech influence, like San Francisco or New York and they don’t have that kind of space available. While San Francisco is my home, I could see myself living here for a bit.

BAL: You’re just passing through this time, what are the must-sees on your list?

SK: To me, Berlin is a city where it’s better not to have plans, it’s more about the people, the nightlife and making connections. There is stuff to see in Berlin, but you know it’s not like going to New York, London or Paris where you are just overloaded with beautiful sites everywhere.

SK: People have a lot of leisure time, the bars don’t seem to have a closing hour and there is a lot of empty space. It feels like an expansive space to think and it’s difficult to find a city where you can repeatedly come back and have it be different every single time. That’s my favourite part, how organic the relationships and interactions are which unfold every time I’m here.