DUVE Berlin is now showing Iris Touliatou‘s new exhibition Can You Wash The Water. In her third solo exhibition with the gallery, the Greek artist looks at imitations, surrogates and substitutes, counterparts to nature, synthetics and the location of value while bridging the gap between art and fashion. The work is the result of personal ventures into the topic of artificiality through an array of sources, from literature to music, and a collaboration with 2**8daughters, a Berlin-based fashion designer-artist duo. 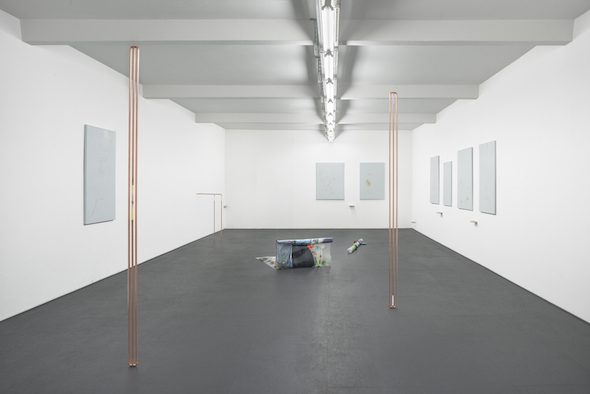 Iris Touliatou: Can you Wash The Water featuring 2**8daughters, 2016 // DUVE Gallery. Credit: Courtesy of the artist and DUVE Berlin

Ruth Amelung: You’re back in Berlin with DUVE for another solo exhibition, what keeps drawing you back?

Iris Touliatou: It’s always so smooth. When I come back to Berlin it just feels like I have never left. The gallery and I have such a balanced and evolving relationship. I can develop all my ideas here and they’re a really good vessel. Not only in terms of a space relationship, but it’s also a very good platform for me. I feel that I have no limitations, it’s like a carte blanche with them. It’s been five years and I feel like we’ve grown up together a bit.

RA: Have you been working on this show between your studios in Paris and Berlin?

IT: I actually moved to Athens in April of last year. I think it was an accumulation of feelings, reasons, states of mind, both personal and professional. And I’ve always had a house in Athens, which has a big beautiful studio in it. I needed to re-root and regroup my thoughts, because I was too dispersed everywhere, all my things were all over the place.

RA: Perhaps this up-rootedness and the changes also influence your work, you’re looking at the subjects of substitutes and artificiality?

IT: I’m actually really inspired by this flexibility and plasticity, moving around, working in your head. I think it can actually be very enjoyable. I also don’t need a physical space really, I don’t care about that, but at this point, I needed to regroup for myself a little bit.

RA: Where did the idea for this show come from?

IT: It’s a result of my previous work and research. An earlier installation I did for abc – art berlin contemporary was dealing with artificiality and for the last two years I’ve been looking into the subject of surrogates and substitutions. There ares very subtle distinctions that characterise a current state, how they’re redefined and how I am ingesting and digesting them.

RA: How has your research and work evolved from your previous installation?

IT: Instead of reading and using a lot of references like I always do, I’ve done less of that and that’s very much on purpose. I think the subject in itself is not something that I need to associate some sort of historical research with. However the range of the few references I do have is still fascinating; from beautiful 18th century literature like George Eliot‘s Middlemarch to Thomas Pynchon‘s novels like Gravity’s Rainbow and also the written works of some interesting contemporary philosophers like Catherine Malabou and Elisabeth Grosz. Apart from the literature, there are also a lot of popular culture references. My partner is a musician, and I’ve been listening to a lot of music, and the title of the show actually came because I was listening to a couple of records while this show was already on my mind.

RA: How does the title of the show fit into that? Is it meant as a question?

IT: Well, one of the records was Franco Battiato‘s Pollution and the other one was Krisma, an Italian 80s New Wave electro band. In 1982 they released a very experimental record that dealt with water in all its states of matter. In one track there is this phrase ‘Can you wash the water’ and since I was dealing with synthetics, artificial things, imitations and artificial counterparts of nature, I was thinking it would be interesting to create something more watery than water. And the canvases, they’re all my notes and questions. That’s why I like that the title is a question, almost.

RA: You’re opening up your notebooks in the exhibition?

IT: There are a series of canvases on the walls, but I can’t really call them paintings. I have laser etched my notes and drawings on synthetic rubber, so it’s a process, they act as formulas or as alignments of words and substances, of thinking and feeling dualisms that I am currently exploring, both in my work and my life. So they’re dealing with actions, between act and sense, between passivity and connectivity; they are dealing with all these things that for me are interesting states to define anew. And they’ll be different for everyone who looks at them.

RA: You’re exploring ‘the location of value’, what does that mean to you?

IT: Value is of course a very important notion and parameter when we’re talking about substitutes, or copies or artificial imitations and in that sense I continue to explore this matter.

RA: You’ve decided to invite artist and designer duo 2**8daughters into your show in the shape of a textile-based capsule collection, what sparked that idea?

IT: I know Isa Griese, one half of 2**8daughters, quite well. We did a residency together in 2009/2010 in the Palais de Tokyo, it’s called the Pavilion and so we’ve already worked together. She is a trained fashion designer and then I was looking at her collaborations with Derek Di Fabio as 2**8daughters and I found their approach very challenging, and so different from the way I deal with the space or even the process of the work. They deal much more with the present moment in a very emotional and fluid way and I wanted this element inside the show and also it was part of my idea of second skins. To me it’s not really fashion actually. It has nothing to do with fashion. 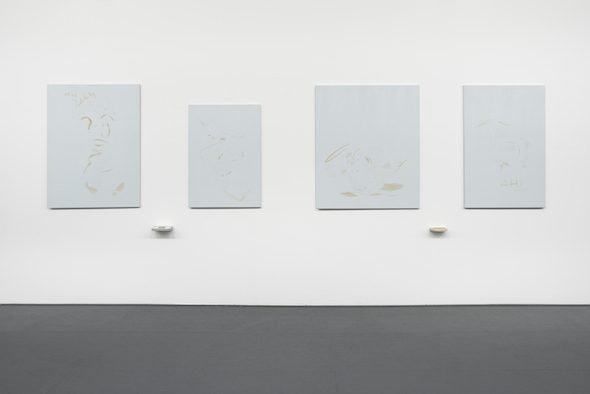 Iris Touliatou: Can you Wash The Water, 2016 // DUVE Gallery. Credit: Courtesy of the artist and DUVE Berlin

RA: Yet it’s still a collection they’re presenting within the show?

IT: It’s a collection of a few essential items, that don’t really go out of fashion. At the time, they were working on a kind of biker clothes collections, so there were a lot of skinny, tight shapes, trying to imitate skin, but also protect and especially enhance the figure. And enhancement for me is the interesting term, because all these synthetics are kind of efforts to enhance. We started to very freely exchange ideas and then decided that going with the original idea of a biker collection would be really fitting with the show.

RA: Values, imitations and copies: these are also big topics in the fashion world, with high streets copying from designers, the value of clothing is determined by the brand, cheap labour for cheaper prices. Did you dive into these topics at all?

IT: I was more playing with the idea of plasticity. In the show, there is nothing organic, nothing that can be found raw in nature, and this was a rule. I liked working with that idea in my head, and also Isa and Derek were working only with synthetic fabrics, that have super high elasticity and extreme endurance. Properties of materials are also important, solid, fluid or casted state; there is nothing stable and solidity is completely illusionary for me, so I think I like the idea of these kinds of fabrics, because they play a lot of with the idea of elasticity and strength. And I love those things; when clothes are made to enhance your speed or to not alter your body temperature. All these amendments I found interesting. Et voilà; functionality and property of materials and how we use them.

RA: Let’s talk about the poem in the press release that can be read on the website, is that an original?

IT: There are parts that I wrote, some parts I’ve read and some parts are from 2**8daughters. My partner wrote a few words, it’s very honest. It’s actually not something I wrote to be included in any sort of press release but then when I was reading it back in my notes, I thought that it was the most honest thing I could say about the show. And I am inviting someone else to be in this show, so it was a nice thing for us to connect our thoughts. Krisma lyrics are included actually, it says: ‘the waves that I produce, you swallow what I choose’, and then it goes on: ‘can you wash the water.’ 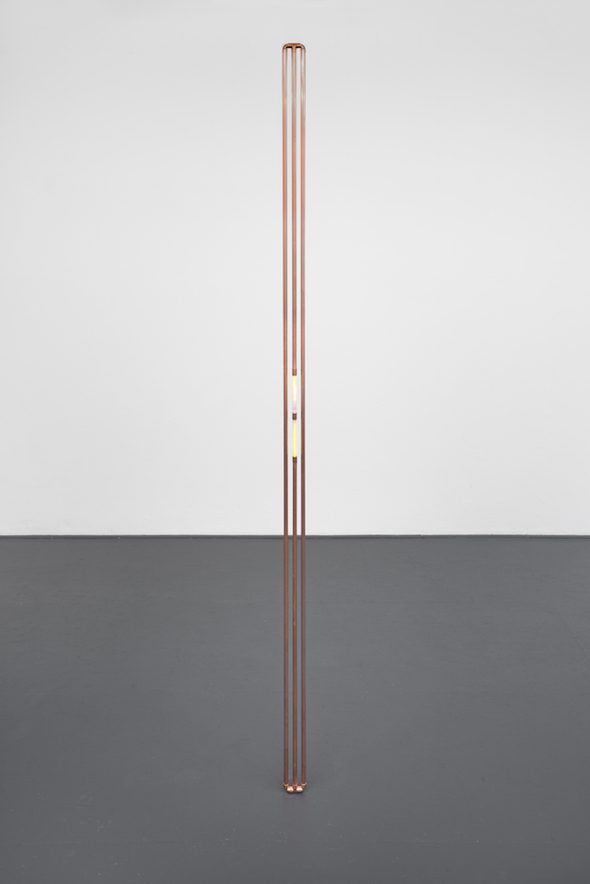 RA: From looking at surrogates, imitations and counterparts of nature, where do the copper tubes fit into the installation?

IT: It actually starts from the liquids inside them, which are references to many things clashing and translated into this action- reaction substances. All these syntheses, or liquid solutions as I call them, are part of my notes, and the way they are installed in the space is also a reference to past works and exhibitions, to cycles and structures made of soft matter, thus their title “Dissolving Questions”.

RA: What would you like people to experience in the show?

IT: I guess it’s about transformation, and self-reflection, as you can’t have one without the other. A phrase from W.v. Braun’s introduction to Pynchon’s Gravity’s Rainbow comes to mind: ‘Nature does not know extinction, all it knows is transformation.’ I think that’s very fitting.