“The moon is dancing. It’s turning circles around us, blowing in the wind as it descends from space to Earth. Delicate moon—rippable, paper thin—upon a crane of fire-engine red that glides through the clear night sky. It slices at the stars. Let the light descend, disappear and then slowly die.”

I wrote these words while floating. Or, more specifically, while on a Blue-Star sightseeing boat sailing down the Spree. As a venue for the 9th Berlin Biennale’s weekly performances, this evening’s iteration presented a work by American artist Lindsay Lawson, in collaboration with Erika Eiffel and Trevor Lee Larson. 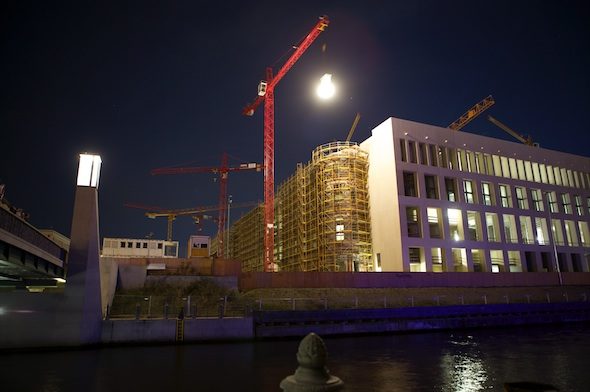 Lawson’s practice is very much about objects; exploring the history of objects, their material specificities, their inner lives, their potential for future narratives, their value both sentimental and financial. She manipulates found objects using moulds and plaster, incorporating these into sculptures, vases, canvases (and even inkjet prints). Her on-going project ‘The Smiling Rock’ charts an obsession and love of a rock that she found listed on eBay; not just any rock, but one whose cross-section is marked with the perfect image of a smiling face, white eyes, black pupils and mottled ochre brown skin.

Perhaps it was this fascination with objects that led to Lawson’s collaboration with Erika Eiffel, an Object Sexual, defined as ‘a person who has intimate, romantic and spiritual relationships with objects’. Having been married to the Eiffel Tower and entering into a relationship with her archery bow, one of her current object-loves is a network of tower cranes on which she works as a construction operator for the Berliner Schloss.

Embellished by a combination of fluorescent up-lighting, opulent flowers in glass vitrines, artificial grass, and wires and twigs interwoven around banisters, this futuristic hybrid boat-garden-spaceship drifted towards Museum Island on our unique sightseeing tour. 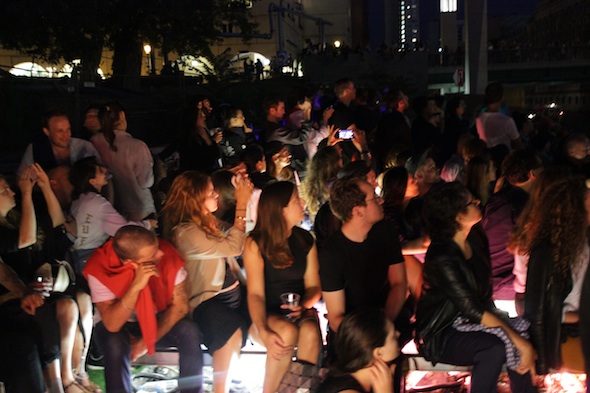 As we neared the Berliner Dom, the boat slowed and the towering crane came into sight, its arms dancing in the night sky, performing graceful pirouettes, pliés and arabesques. Hanging from the end of crisscrossing metal bones was a giant globe, this pale amber orb defined by its delicacy in contrast to the bold angular form of the beams. Though indecipherable at such heights, Eiffel was up there operating the machine while Lawson directed the choreography via a walkie-talkie from the boat below.

Up, down and around the glowing ball swayed, our eyes glued to the spectacle, our ears filled by Larson’s live experimental guitar drones, matching the magical movements and illuminating them further. This was a rare moment of poetry, transforming a usually stern masculine object into one of gentle prowess. Perhaps this allowed us all to fall in love, just for a moment, and to view this object—usually relegated to building sites—in a different light; an eyesore transformed by its graceful wonder amid the concrete fabric of an urban cityscape.