Refractions of light emanate from the gaps between the edges of a mirrored cube, patterned beams echoing around the room over and over again, creating an expanding immaterial matrix; bright light peeps out from the top of a plinth, a shadow drawn as a borderline upon surrounding walls; a cube of ice slowly melts into a black puddle of ink gathering and swirling upon the floor, rivulets running. These are just some examples of Berlin-based artist Kitty Kraus’ material gestures, having used glass, light, heat, mirrors, ink, ice and clothing unpicked at the seams to create seductively fragile and temporal landscapes.

In other works, two panes of glass are brought together at angles to recall bent-over human bodies, balanced with a tension that might falter at any moment. Almost invisible except for reflections upon their surface plane, these forms seem painfully fragile, as you tentatively maneuver around them, conscious not to disturb their precarious equilibrium. The balancing act of Kraus’ materials seems fraught with instability, their inherent imperfections shifting her sculptural gestures over time. We discussed the role of light in her work, which gives form to both visibility and invisibility, both of which are intrinsic to Kraus’ transitory pieces. 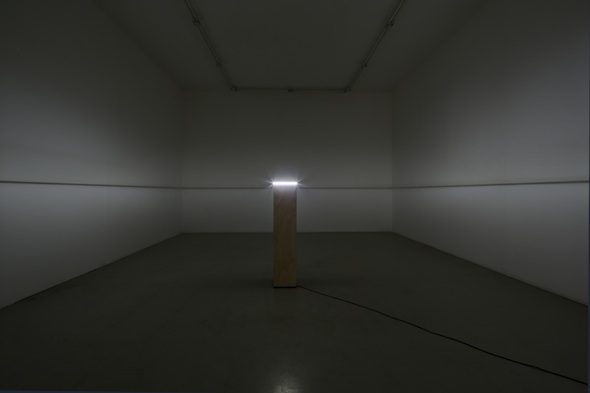 Louisa Elderton: When did you first explore using light in your practice?

Kitty Kraus: I think it was in 2005 when I had this thought that I wanted to enclose a light in complete darkness, to have nonvisible light. The first work I did was an enclosed light in a mirror box. So it became like a light bomb, an endlessly reflected light in a closed box; it also got very hot, as heat is an inherent quality of light. The mirror is mute when there is no light. The pictures or the things we usually need to experience light are excluded. This ‘emptiness’ was endlessly reflected by the means that makes visibility possible: light. When I opened one border of this box, the light traced the endlessly copied borders on to the wall. I also compared this work to a head. I did several different works to explore these qualities. I think (in)visibility and space have, since that time, remained prominent in my work.

LE: How did you compare the work to a head and why?

KK: I had this thought because I realized that a few of my works are about the head or ‘headlessness’: the possibility of loosing the head. So I was searching for the head. And then there is this word ‘reflection’ and I liked it; there is nothing inside, nothing there to be reflected, it is just about light and borders. It is very simple with no image to be constructed, but still, each box is projecting a different inside or insight. I made different lamps; the successor was even more reduced, just throwing a shadow line on the wall. There, I was thinking about seeing (through the gaze we enter into the light): it is the instrument which gives rise to light. Incidentally, I also wrote a text about this lamp called ‘Blink of the Eye’, which is published in a book I did in 2014 called ‘Lidschlag’ (Blink of the eye). 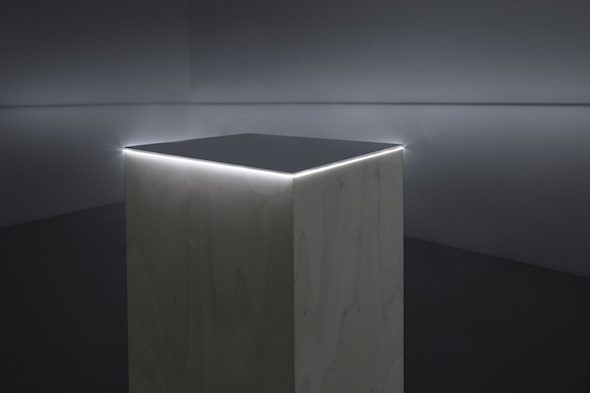 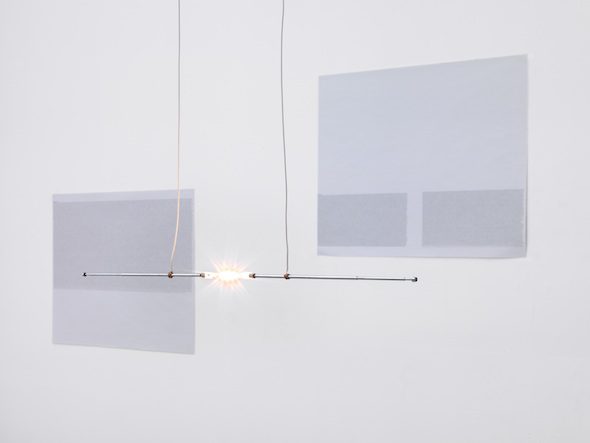 LE: How have you gone on to explore the dialectic between invisibility and visibility in your most recent works?

KK: A basic element is that I decided never to have titles, except for my text works and, indeed, two works which almost consist exclusively of a title: ‘Au sourir près’ (near to a smile), which points to this very gentle light, and ‘Here comes the morning sun, here comes another one’— this was a dark room with an object that was probably not seen. The most obvious examples are maybe my glass works; I somehow see them as an empty sentence. Although they are almost invisible, they make you see the surroundings even more distinctly as they remain anonymous, absent. The expression still retains the ephemeral reflection of the beholder on the surface of the glass, which is a simplified right-angled form suggesting the body of a human being (in this aspect, the six-metre-long glass is afflicted; it seems to be in a state of jest, but is also in a most unpleasant state, by being bent until on the verge of collapse, the breaking point is already determined). The antenna lamp is a very direct example; I showed it together with a text about decapitation, titled ‘Dekaputcapitalisation’. Because it is a strong light strip, when you see it, you have an afterimage like a black censor, crossing out the sentences when you try to read.

LE: Thinking of heat: you have also used ice in your works, which melts into puddles and leaves marks as it melts and moves. Did you first become interested in heat as an extension of your interest in light?

KK: Maybe I am more interested in the cold or ice, as a way of holding something in shape? Glass is also somehow just an undercooled, endlessly retarded liquid. What interests me also is the tender point of equilibrium that is needed, the conditions for existence in certain ways, and also the possibilities that arrive when conditions change. It can be a very silent process, so I put an underwater microphone in the cube of ice to record the cracks that resulted from this adaptation from cold to warm, making it audible. What was seen in the end for most of the visitors was just the microphone hanging over this mess or this new world – dried out, it looked like a landscape from above, that was now visible. 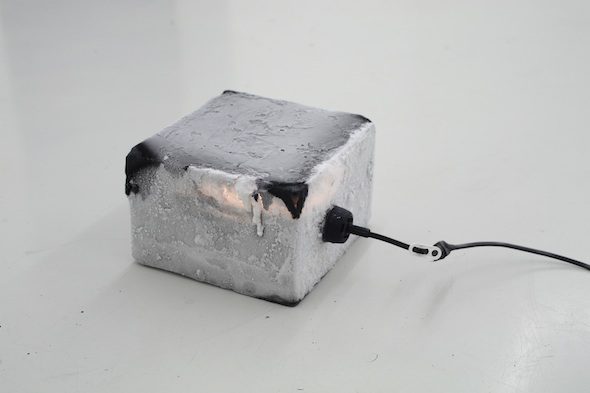 LE: Is fragility interesting to you in terms of the materiality of your works? Or is it gestures of violence that are of interest to you?

KK: These are difficult questions: what is violence or a violent gesture? I feel like my work points to violence or some kind of authority in an abstract way, with a gesture that is trying to deal with it, deconstructing or dissolving it in looking for space. Maybe relating to, for example, the rotating Lidl bar, I saw it as a truncheon. Maybe by reading everyday life as violent, considering what can happen to you, you can feel how prefabricated the tracks are on which you have to move, or where they are often trying to lead you. As art for me is mainly about freedom, I tried to clear up at least these two square metres where the shopping cart bar can go crazy. Because of the speed at which the bar spins, it almost reaches the point of invisibility. The only visible thing is the titled ‘i’ of the ‘Lidl’. 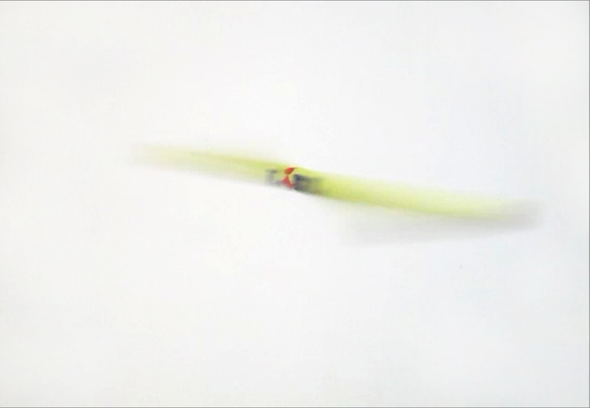 LE: As well as exploring invisibility and visibility, you seem to explore the relationship between temporality and permanence (one writer described you as demolishing ‘an orderly world’). Does it matter to you if your objects are not constant, permanent? Does this reflect the impermanence of life, the certainty of death?

KK: It is more the idea that is interesting, and as some objects are not permanent, they can be easily rebuilt. It is also a way to free them from the biggest of all restrictions [permanence], as well as involving fragility, which is important to me. They also often point out the importance of the moment itself, one moment, wherever this is.

LE: Where is your next exhibition and what are you showing?

KK: Maybe still this year, I have an exhibition at a friend’s place, ‘Walks News’ in Berlin. At the beginning of 2017, I have a residency in Brazil, and I hope to have a show there too. My next exhibition will be at my gallery—Galerie Neu—in Berlin, where I will show new works, which I am now about to prepare. 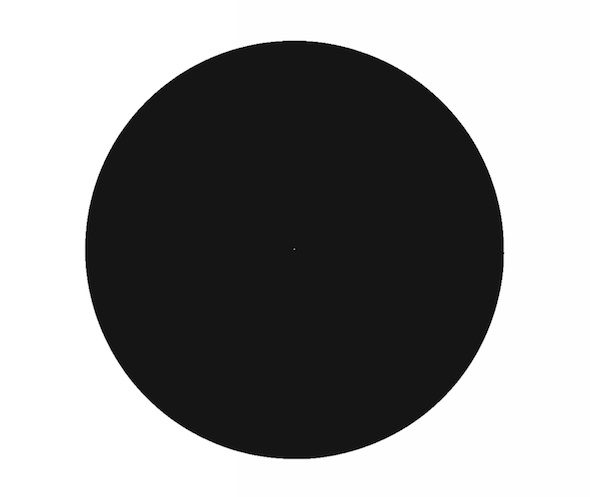