The past year has been an exciting one for VR technology. Carl Goodman, Executive Director of the Museum for Moving Image in New York recently highlighted the paradigm shift: “Virtual reality has been ‘just around the corner’ for 25 years. Now we’ve turned that corner and 2016 will be the year when VR transitions from a set of technologies to a true moving image medium.”

Philip Hausmeier, a Berlin-based artist and VR-enthusiast from its beginning, graduated in Communications Design at the University of Applied Sciences Düsseldorf in 2003 and received a M.F.A. in sculpture from the Slade School of Fine Art London in 2005. He is the founder and organizer of the Berlin Virtual Reality Meetup, which brings together interested people from different backgrounds. He currently focuses on the creation of virtual reality apps to be  published with the upcoming release of consumer Head Mounted Display (HMD), worn on the head or as part of a helmet. In our interview, we talked about the possibilities, creative potential and risks of VR for contemporary art. 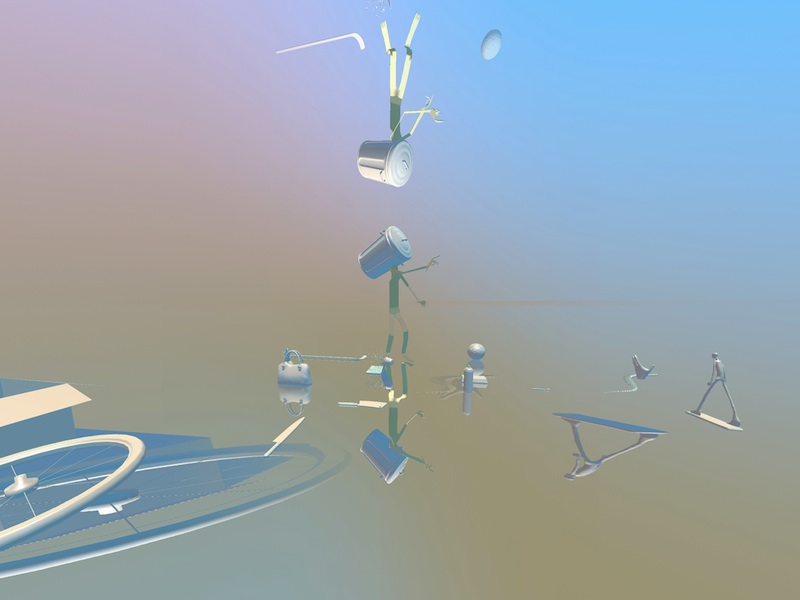 Ursula Ströbele: I remember using VR goggles for the first time in your studio three years ago, which was an impressive experience. Since when have you been working with this technology and where does this interest come from?

Philip Hausmeier: Since I was an art student, my main interest has always been our relationship with space, the experience of it, whether it originates objectively or subjectively. When I discovered the first VR headset by Oculus in 2013—a Kickstarter project back then—I immediately saw the potential of this technology: mainly to explore unknown territories of what we define as space.

US: In my habilitation project, I am researching sculptural boundaries, how new technologies, such as 3D printing or VR, might be used as sculptural tools and how they modify our way of perceiving. As someone with a background as a sculptor, what do you think about this development for the medium of sculpture?

PH: The ability to create spaces and volumes that don’t adhere to the limitations of the physical world is to me one of the defining qualities of VR, pushing human experience further in understanding itself.

Virtual Reality uses the nearly infinite possibilities of the digital and brings them into a spatial, embodied relation to ourselves: people have said that VR is the most natural interface. A sculptor is largely interested in how space, volume and material behave under certain conditions. Here, VR with new tools like Oculus Medium unleashes a vast palette of aesthetic decisions that pushes sculptural exploration in a direction physical tools haven’t been able to offer.

There is already a usage of new kinds of spatio-temporal locomotion and interaction never encountered before, like teleportation, which is currently widespread among developers. 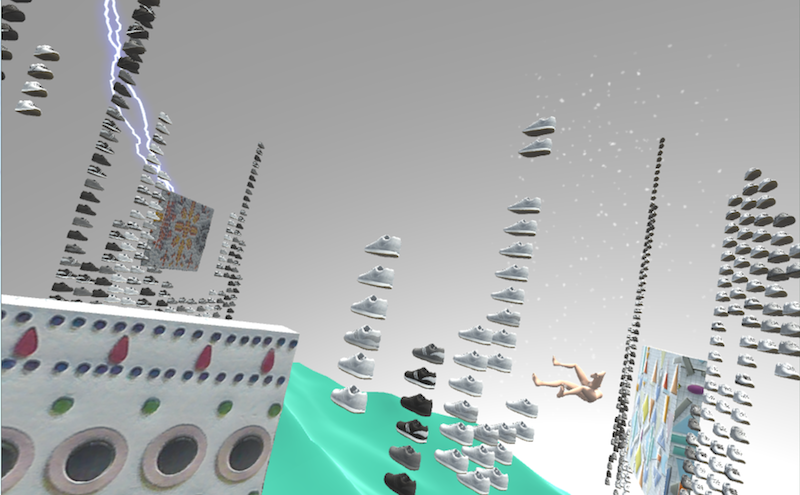 US: As early as the 1960s, one of the pioneers for computer graphics and digital art, Herbert W. Franke, recognized the growing importance of VR and asked if the computer will lead us into new areas of sculpture. How will this change the concepts of materiality, haptics and plasticity?

PH:It is certainly an ongoing process with foundations that have been laid in recent decades: Maurice Benayoun and Char Davies have made groundbreaking work in this field so far. The advent of smartphone technologies has helped to make the medium more accessible, yet the hardware costs are still very high for mainstream adaptation. Most high-end VR applications run only on PCs, and what are most artists using? Macs. In terms of materiality and haptic feedback, the technology is still a few years away from creating meaningful content, although prototypes do exist. At this stage it is almost the contrary: you are in an embodied spatial relation to the virtual objects around you, yet you can’t touch them, and that makes the whole experience more frustrating in some ways.

US: You just returned from a trip to Silicon Valley, where you curated your first exhibition. Can you tell us more about the project you realized there?

PH: In addition to my own work, I felt the need to enable other artists to get to know the medium and to realize their ideas for it, culminating in the exhibition ‘NAUSEA’ that was on display in the Computer History Museum and SVVR in Mountain View this November. We worked closely with several artists to create a virtual group show using the HTC Vive, the most sophisticated VR system currently on the market due to its room scale tracking technology. The artists in the show are Eddie Peake, Melodie Mousset & Naem Baron, Jack Strange, Florian Meisenberg, Anna K.E., Ruben Grilo and Anne de Vries. 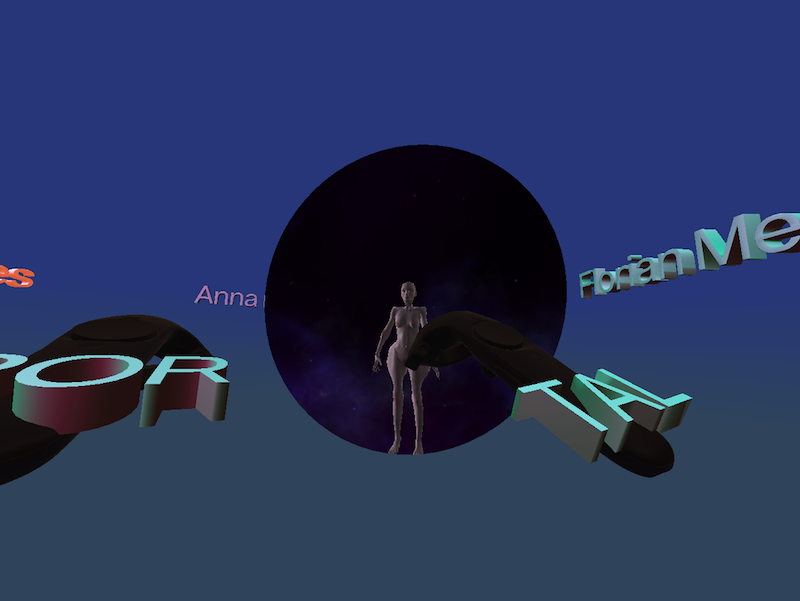 US: How could people visit the exhibition? What kind of display and presentation did you choose, reflecting the isolation of the recipient’s perception?

PH: The exhibition itself is completely virtual, meaning when you put on the HTC Vive headset and take the controllers in your hands you are able to explore the different virtual spaces of the artists. These are all connected by an innovative portal system that we developed, where you can open a portal to the respective artists’ space. That sensation is quite strange, you can actually stand in two different worlds. We are working on a multi-user version where you and others can visit the exhibition together. For now it is an isolated experience, yet others standing in the same physical space can share, via a screened projection, the perspective of the person inside the virtual space.

US: Besides the exhibition ‘NAUSEA’, 2016 was also an exciting year for your own professional career as you founded a start-up Metaphysics. What is this company about and what are your plans for the future?

PH: Metaphysics, currently consisting of me, two programmers and a 3D modeller, wants to lay the ground for making VR and MR art more accessible. In the beginning of 2016 I took part in a VR accelerator in Silicon Valley and received seed investment to bring artists and VR together.

To achieve this, we work on multiple projects: aside from NAUSEA, which will be shown in other venues throughout the next year, we are developing a VR experience for the online platform Steam. We have also started to partner with Oculus Medium and other VR creation tools to bring those to the artists, and to curate exhibitions with them. In addition we advise artists in realizing their ideas for VR, and when needed also do the production.

US: Imagine, in about 10 years VR is a feature of daily life and everybody has a pair of glasses. Do you think there is a risk for global society, affected by this increasing immersive environment and loss of distance?

PH: The loss of distance already felt with the digital today would be increased with future VR/MR environments where you as a whole body are immersed and connected to everyone else. It means that your experience, your perception and your feelings are much more sensitive to data collection and online harassment. However, it might not be a problem of these immersive tools themselves, but whether we want to use them online all the time. Another risk can be the escapism VR offers. I personally have the approach that this technology should be an extension of reality and not its substitution. 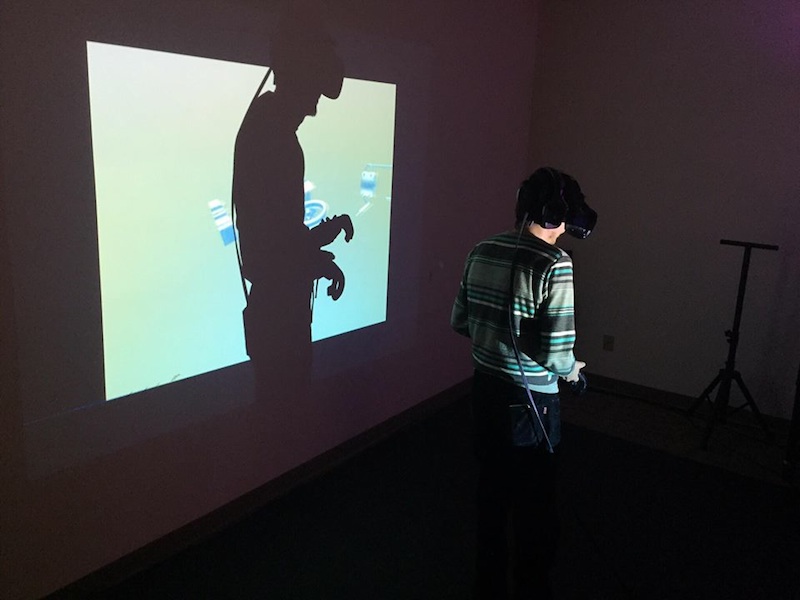