From July 7th to 14th, Food Art Week Berlin will wage war on the meat industry, and suggest alternate modes of consumption. Experimental and fluid, the festival has selected several artists, chefs and intellectuals to collaborate and exhibit work on food, be it through performances, lectures, workshop, art exhibitions, or vegetarian dining experiences. Spread throughout the city, the festival recalls avant-garde gustatory experiments in a contemporary, neoliberal context; where food, seemingly superfluous, has become more mass-produced and politically pertinent than ever. 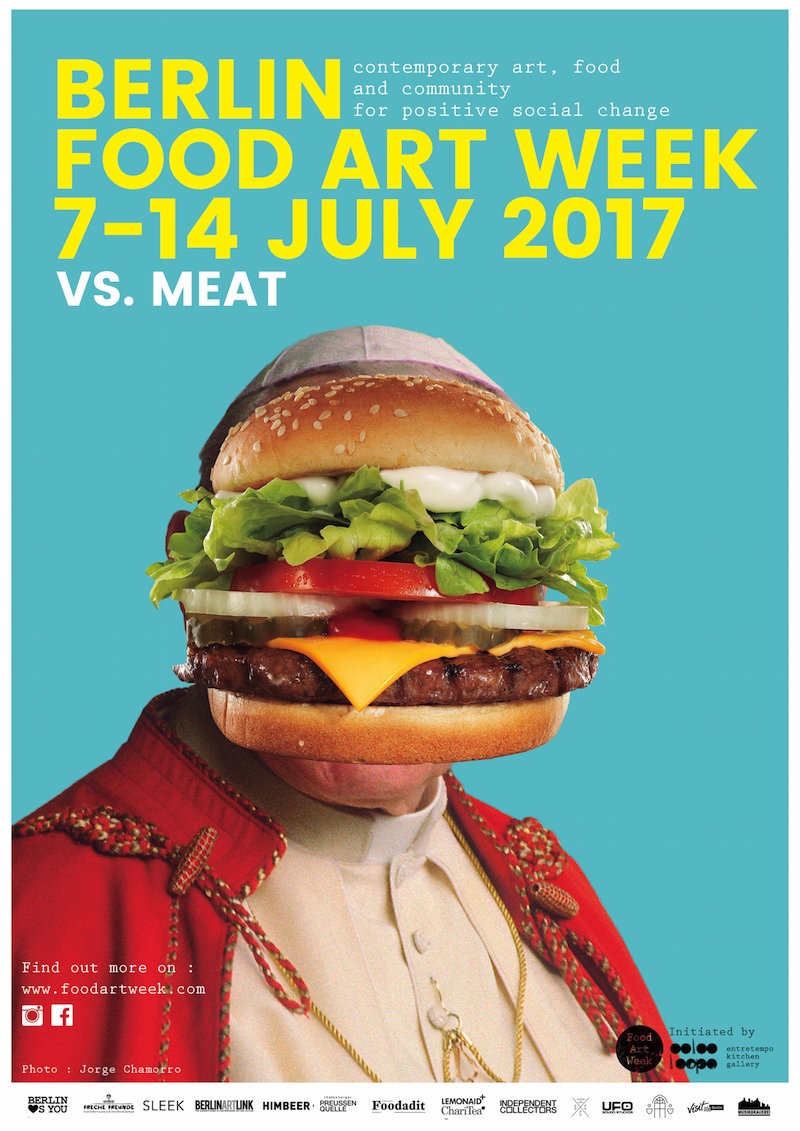 Each year, the festival takes place in a different city, having been previously held in urban centers from Sao Paolo to Bologna. Exploring the interconnectedness between art, politics, and food, Food Art Week is organised by the Entretempo Kitchen Gallery and curated by Tainá Guedes, who sees both art and food as a means of expression and discourse. Entretempo Kitchen Gallery is a Berlin art space that prides itself on its progressive research efforts into sustainability, and the aesthetic and political implications of food.

The festival opens on July 7th at Hallesches Haus with two performances by Sebastian Liljedahl, Veronika Krenn and Vesela Mihaylova, and an opening party. The main art exhibition at Hallesches Haus includes Uli Westphal‘s installation ‘In Vitro Garden’, on artificial cultivation. Westphal will also hold a talk about ultraviolet schnitzel at Das Kapital on July 11th. Other artists to watch out for at Hallesches Haus are Ayrson Herclito, representing Brazil at this year’s Venice Biennale, who revives spiritual Yoruba recipes of the oft-overlooked Afro-Brazillian culture; as well as Kate hers RHEE looking at the long-associated tropes between women’s bodies and meat. Other participating locations will include the Entretempo Kitchen Gallery, Ex Berlin and the Musikbrauerei.

July 8th finds panel ‘Future Meat’ by Hendrik Haase, Prof. Guido Ritter, Valentin Thurn, Sustainable Food Academy, and Abi Aspen Glencrosand; and later at 10pm an open-air movie screening of ’10 Millarden, wie werden wir satt?’ (10 Billion, how will we be full?). On July 9th, a variety of participatory workshops will be held, such as Sarmishta Pantham’s Stop-Motion workshop, followed by artist Anne Duk Hee Jordan‘s cutlery-free ‘Into the Wild’ dinner, rediscovering the multiple uses of unorthodox plants. Similar events will be held for the entire week, including events for children. Food Art Week will end on the 14th of July with a closing party at the Musikbrauerei, featuring artist performances and DJ collectives, centred on meat production and the forest, starting from 7pm.