Romanian choreographer Alexandra Pirici has enacted a number of her recent sculptural additions and ongoing actions in Germany over the last year, beginning with her contribution to the 9th Berlin Biennale, through this summer’s decennial Skulptur Projekte Münster to her most recent solo exhibition ‘Aggregate’ at Neuer Berliner Kunstverein (n.b.k.). Her playful choreographies and tableaus reflect on urgent political questions, responding to the history and significance of the sites in which they’re produced. As part of ‘The Mole Keeps on Digging’ festival at HAU this month, Pirici will bring her ongoing action ‘Delicate Instruments of Engagement’ to the theatre setting: reconstructing a series of images, situations, Internet memes, and public speeches. We spoke to Pirici about the concepts behind her recent performative works. 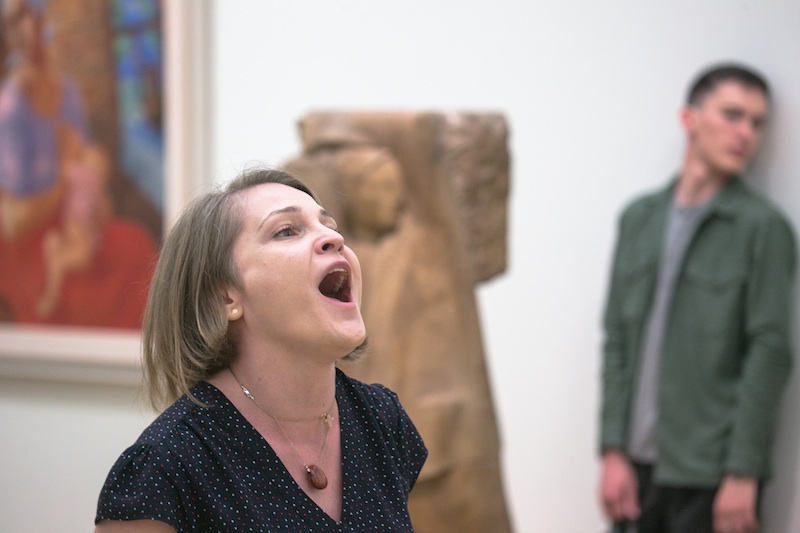 Alison Hugill: To what extent do you consider your choreographies to be playful, in terms of interaction between performers and audience?

Alexandra Pirici: I think there is an element of chance in some works, like ‘Aggregate’ and also more specific moments of interaction in some, like ‘Leaking Territories’, where visitors can take the opportunity and interact with the performers as with a human “Google” search engine. That could be associated with playfulness and the concept of a game. There isn’t much interaction intended in general, though, but I think there is implicit playfulness in the encounter between audience or visitors and the performers, in who is who and who is being looked at. 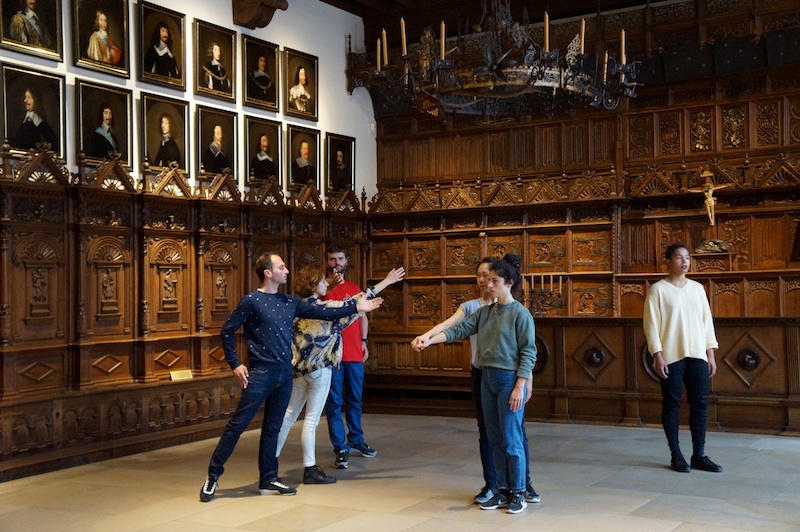 AH: In your works both at the Berlin Biennale and the Münster Skulptur Projekte you use algorithms and technology, albeit in different ways, as subject matter and method for the collaborative images you create (using predetermined narrative cues or search engine options). Can you talk about how and why you weave technology into your practice?

AP: My practice involves working with the human body and the human living subject-object as medium, almost exclusively. But I think that actually opens up a very wide range of interests: basically everything that affects, shapes, transforms and ultimately co-creates “the human”. Of course, technology at the moment has unprecedented agency over and impact on the human subject so it felt necessary to reflect on that, even if I think technology can be reflected on only through the human body. And I think there is an important thing to be said: I am not really into using algorithmic decision making to obtain some sort of apparently chance-ruled system but rather in making visible and experienceable human bias and human politics that determine the protocols and functioning mode for whatever software we create and is supposed to obscure them.

For example, ‘Signals’—the work produced for the BB9—included a digital software that functioned as a ranking algorithm on similar principles as Page Rank or Edge Rank only all parameters that were used (and, of course, there were fewer parameters than Page Rank or Edge Rank uses) were made visible and explained in the exhibition space. In ‘Leaking Territories’—the work as part of Skulptur Projekte Münster—the performers embodied a human search engine at some point, trying to function on the same principles as Google search. They profile the audience members’ search, in order to personalize, customize, offer relevant answers, and thus to reflect also on what these concepts mean and how they actually translate. There is a lot of improvisation there but also quite clear protocols for how the process takes place. 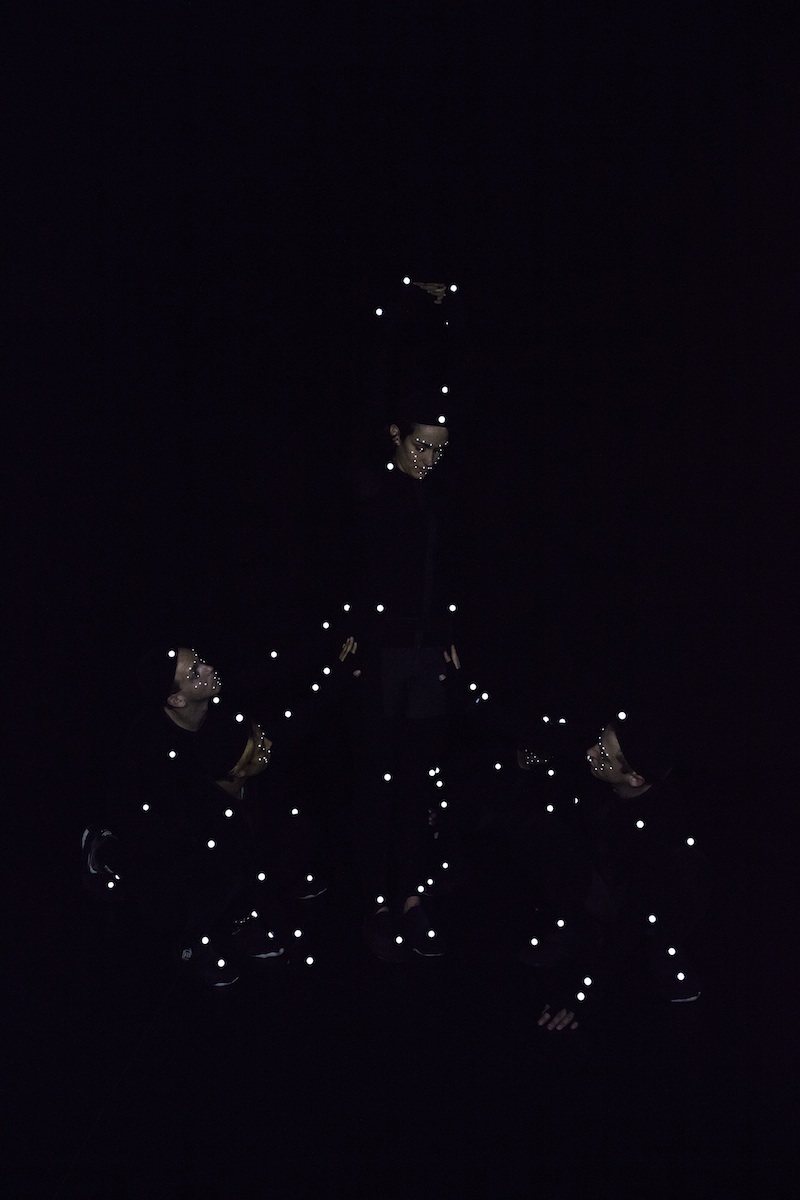 AH: Your work has evolved slightly from playful interaction with monuments and sites of political or historical significance, to include the digital as a site of contemporary knowledge production. How are we writing history today? Have these kinds of physical signifiers (monuments/palaces) become more or less powerful, in your opinion?

AP: I think the material, physical space and the “immaterial”, digital space do not stand in opposition actually but in total symbiosis. Especially since we now know and see the immense material infrastructure that supports the “immaterial” internet, data mining, bitcoin mining, etc. and the amount of resources it consumes. Perhaps huge data centers and bitcoin mines are simply more remote “monuments”, hidden from public view but in the end they might stand for the same drive to exploit, extract, subordinate, reinforce hierarchies as more “traditional” monuments. 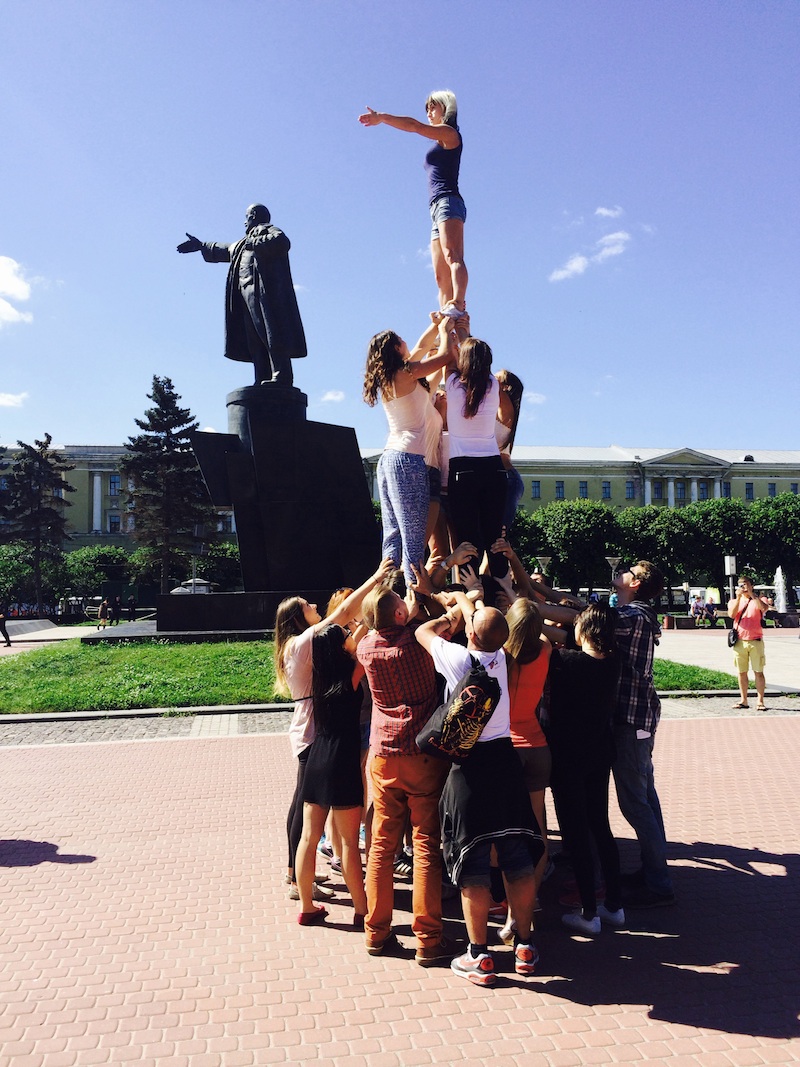 AH: In your exhibition ‘Aggregate’ at n.b.k you were working with over 80 performers. How did this unfold in the space, with the distinction between performer and visitor inevitably blurred by the sheer numbers?

AP: I was interested in how performative works can re-define the exhibition space, to what kind of worldview the exhibition space / white cube corresponds and how that should change today. So if we think of the public museum and the exhibition as a format for rehearsing and constructing modern subjectivity and the modern, “free” individual, we must see it as also inextricably tied to colonial expansion and the “freedom” to appropriate and claim inhabited lands as “terra nullius”, to ignore life that was already there. The world, thus, was imagined as an empty, wide space that was to be discovered and through which one could move freely, at one’s own pace and according to one’s own individual will, unconditioned by what was already there.

Most successful exhibitions and exhibition experiences, I think, still retain some of that ethos: we are fascinated by big, wide spaces, spacious installations, fictions of a wide empty world that is actually now a global village and a shrinking space that has to be shared. So I wanted the exhibition space to correspond to an inhabited and shared world, a space that is already occupied but that you can still be a part of – however you decide. The visitors thus also behaved in different ways: some felt free to walk around, within and through the configurations and structures that the performers created through the space; others stayed more still, on the sides; some were displaced; some surrounded; some joined the performers in certain actions; some looked from a distance; some spent 20 minutes in the space, some 4 hours and returned the next day. 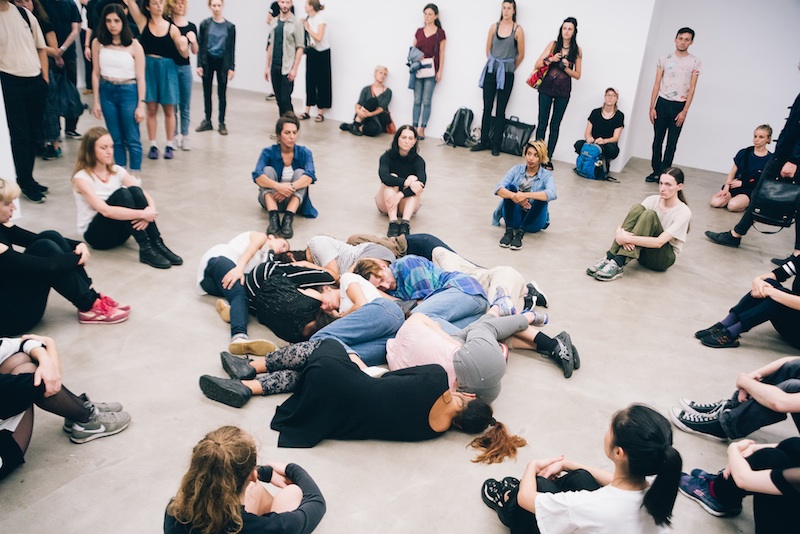 Raluca Voinea and I imagined the proposal as a subjective, embodied time-capsule: a selection of images, sounds and actions enacting animal and plant life, nature and natural phenomena, cultural artifacts, artworks, gestures, bits and pieces of songs, dances, poetry excerpts, parts of our common shared heritage and natural-cultural environment on Earth, to be memorized and archived through and within the human body. The performers could use references from a previous selection made by us, which they could proliferate through the group, by multiplying, amplifying and essentially hybridizing them. This happened based on a set of rules that still offered a lot of freedom of choice but also structured the action, like an algorithm which produces an ever-changing landscape of shifting images, situations, structures, associations on which you can project meaning. It was a sort of stand-off between a multitude of Michelangelo’s ‘Davids’ and Da Vinci’s ‘Mona Lisas’, for example, a group performing an abstract “hello/ goodbye” gesture cut off from the rest by a row of enacted gorillas, a beach full of Sleeping Hermaphrodites all of a sudden drowned in Eddy Kenzo’s ‘Sitya Loss’ Ugandan pop hit or in a ‘Yeh Jawaani Hai Deewani’ Ghagra song excerpt. There were also singular images that appeared but there was no specific emphasis on them so you might have caught them or missed them. The references are all available on the n.b.k. website but I don’t think it’s essential to know what they are. I think a lot of visitors also just observed and followed the dynamics in the work, how something emerged and proliferated across the group, how something different appeared in one spot while you had your back turned, how things came together and disappeared into something else. 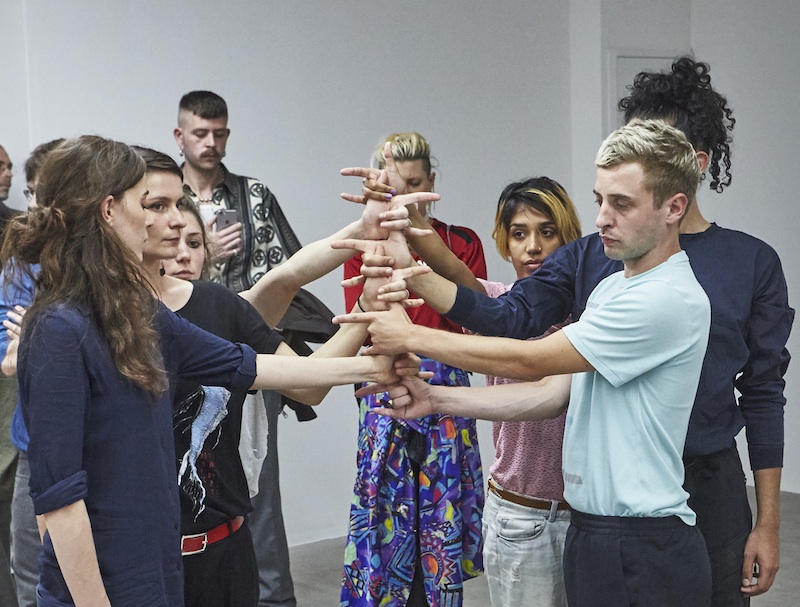 AH: Tell us a bit about your upcoming action ‘Delicate Instruments of Engagement’ at HAU for the festival ‘The Mole Keeps on Digging’.

AP: The work is an ongoing action with 5 performers that remediate through their bodies a subjective selection of images, situations, political speeches, memes, important events within pop culture and politics (also commenting on the merging of pop culture and politics). It’s structured as several narratives that the audience can chose from, with intersecting, similar elements but arranged into different configurations so as to afford slightly different readings. 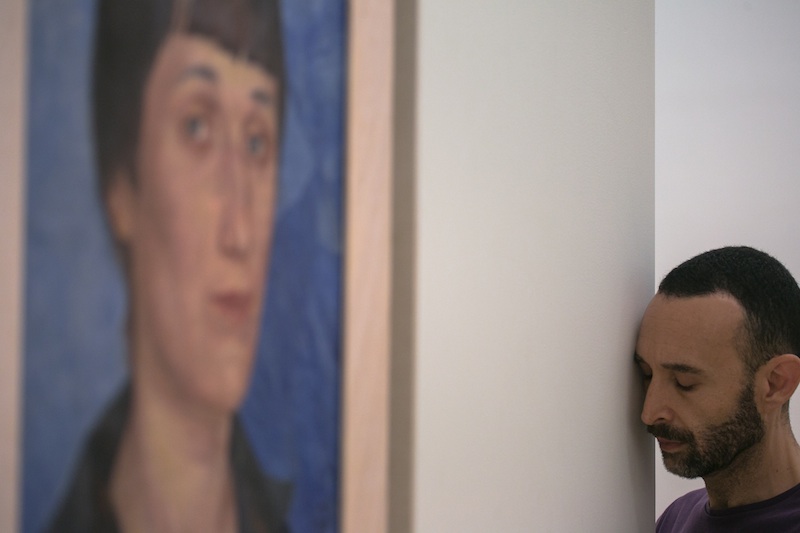 It was made at the invitation of Florian Malzacher for ‘Impulse Theatre Festival’ and initially commissioned to be shown in Düsseldorf at the Kunsthalle/Kunstverein, so in a visual arts space. It had, originally, an element of site-specificity and a sort of mixed raison d’etre, as part of a theatre festival but shown in a white cube, while we actually talked about it not being bound to the white cube. And it was also made in relation to the framework of the festival, which focused on political decision-making and political gestures.

It also draws on and is a continuation of a previous work, ‘Delicate Instruments Handled With Care’, but there are quite big formal and structural differences and also new materials to work with. The element of site-specificity – the city of Düsseldorf – turned into a link to Beuys’ idea of the world as Gesamtkunstwerk and today’s society of total spectacle / total work of art as a dark manifestation of his dream of social sculpture. And one event that seemed to be the perfect example of a certain end point in that was the image of the terrorist, and his victim, the Russian Ambassador Andrei Karlov, after performing an assassination in the gallery space. So by transferring these spectacular images from “daily life” in to the gallery space and now a theatrical environment (the HAU 1 stage), I guess I hope for a better understanding and feeling of how reality is manufactured, by also giving time to unpack these images and play with them as abstract objects, to think and maybe also reveal where and what is the political gesture today in relation to the past.