“Where do we belong? And where are we rooted?” These are some of the questions Cuban-American multidisciplinary artist Ana Mendieta (1948–85) considers in ‘Covered in Time and History: The Films of Ana Mendieta,’ now on view at the Gropius-Bau.

Mendieta, considered one of the most influential feminist artists operating in the period between the 1970s and 80s, created work between the two decades that remains profoundly relevant today. Mendieta’s wide-ranging practice encompasses performance, sculpture, photography, painting and video art. The exhibition, ‘Covered in Time and History: The Films of Ana Mendieta’ focuses solely on Mendieta’s video works and her legacy of video art. Mendieta made 104 films in her lifetime, many of which were discovered posthumously by her Estate. As topics of migration and the experience of displacement are at the height of cultural discourse today, many of us find ourselves asking the same questions Mendieta asks within these works.

The exhibition features 23 expertly-curated video works, which have been restored and digitized after years of research by curators Lynn Lukas and Howard Oransky of the Katherine E. Nash Gallery at the University of Minnesota, and made possible by the artist’s sister Raquelin Mendieta and niece Raquel Cecilia Mendieta.

Mendieta was born in Cuba but grew up in the United States between orphanages and foster homes, sent by her mother who feared for her safety during the revolution. This feeling of exile and displacement would later become a recurring theme in her artistic work. Mendieta’s early works, many made during her studies at the University of Iowa, deal with themes of violence and the body, and violence towards women, likely inspired by the violence she witnessed in her own lifetime.

Mendieta’s iconic use of blood is featured prominently in much of her early artistic work. Works such as ‘Sweating Blood’ (1973) see a closeup of the artist’s face as blood slowly trickles down from her hairline to her unmoving face, while ‘Moffitt Building Piece’ (1973) sees various people stopping briefly (or not at all) to glance at a large puddle of blood outside a storefront, alluding to our complicity in the violence inflicted against women.

In ‘Blood Writing,’ (1974) one of Mendieta’s earliest works, the artist performs in front of the camera, painting in blood the words, “She got love,” likely in reference to the murder and rape of a university student on her campus.

These works take on new meaning given the artist’s own untimely and violent death. Mendieta died tragically at age 37, falling over 30 storeys from her apartment building in New York. She had been arguing with her husband, artist Carl Andre, and it remains unclear whether her death was an act of suicide, an accident or murder. Andre was tried for Mendieta’s death and acquitted in 1988 on the grounds of insufficient evidence, though to this day many remain unconvinced.

Mendieta’s work is oftentimes sacrificial, her obsession with blood also heavily influenced by her fascination with primeval beliefs and the rituals practiced in the Afro-Cuban religion Santería, in which chicken’s blood is offered as sacrifice. In many of these early works, Mendieta’s own female body acts as the central motif, films such as ‘Creek’ (1974) and ‘Burial Pyramid’ (1974) see the artist’s body become one with the earth and with nature, further confronting themes of belonging, identity, and exile through nature.

In later works such as her ‘Silueta’ series, this same female form is further abstracted, replaced with representations created from natural materials such as mud and gunpowder.

The exhibition at Gropius Bau acts as the first under new director, Stephanie Rosenthal, who took the position in February 2018, succeeding former director Gereon Sievernich, who held the position since 2001. Rosenthal worked previously as chief curator of London’s Hayward Gallery. The exhibition also marks the first time the newly restored works have been exhibited publicly, making Mendieta’s work accessible on a large scale for the first time. The exhibition of Mendieta’s work comes after the late-artist’s husband’s controversial retrospective at the Hamburger Bahnhof in 2016, ‘Carl Andre: Sculpture as Place’, which saw protests staged by the activist group WHEREISANAMENDIETA to whom we spoke last year.

‘Covered in Time and History: The Films of Ana Mendieta,’ excels in its recognition of the oft-forgotten video art legacy of Ana Mendieta. The controversy surrounding Mendieta’s death often takes up so much of the space and conversation around her work. The Gropius Bau has excelled in reminding us just how profoundly relevant and powerful Mendieta’s artistic canon truly is today, as so many still seek answers for the same questions she asked nearly four decades ago. 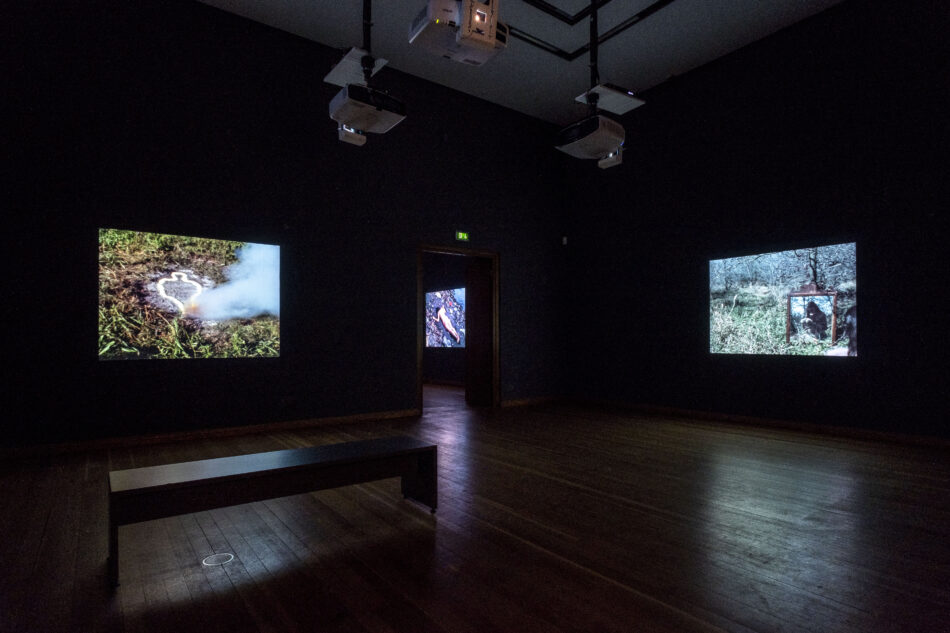 ‘Covered in Time and History: The Films of Ana Mendieta’ at Gropius-Bau // Photo by Mathias Voelzke