On the eve of the Human Genome Editing Conference in Hong Kong, Chinese scientist He Jiankui announced that he had created the world’s first genetically edited babies: twin girls. Two days earlier König Galerie screened I Can See Forever (2018), a pseudo-documentary set approximately 40 years in the future (though anachronistically referencing ’80s fashion, décor and architecture, and viewed via grainy videotape). The film is one part of the critically-acclaimed and widely exhibited ‘Quantification Trilogy’, preceded by Quickeners (2014), and Liminals (2017). In his final installment, artist Jeremy Shaw imagines a future in which government scientists have sought, and for the most part failed, to create a “harmonious synthesis of human and machine,” by engineering subjects with 8.7% Machine DNA biology.

As the backlash surrounding the recent controversy in gene editing has restated, methods used for gene editing are unsafe as they can inadvertently alter other genes in unpredictable ways. I Can See Forever is an extrapolation of the ethical anxiety within the field of gene editing. Structured as the sixth episode of a television documentary series, Shaw’s piece follows the only known survivor of the failed “Singularity Project.” Roderick Dale is a virtuosic, self-taught student of ballet, modern, and various subcultural styles of dance on television. The full effects of his machine DNA are unclear, yet the 27-year-old man is demonstrably different from his unedited peers. 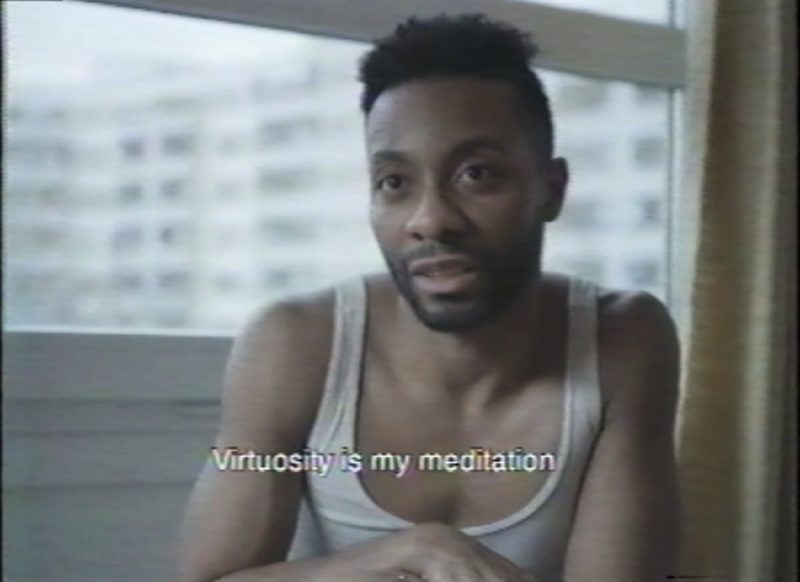 Jeremy Shaw: ‘I Can See Forever,’ 2018, film still // Courtesy of the artist and KÖNIG GALERIE

Most obviously, he talks in a kind of Lynchian backwards-speech that draws from a curious combination of languages. Although subtitled, his speech pattern is so similar to English that one cannot resist the impulse to try to decode it in real-time. This is an ultimately fruitless and frustrating exercise that nevertheless demonstrates his neurological exceptionality. In the documentary, a Dr. Daniel Moore suggests Dale “has access to a state that far exceeds ours. That doesn’t make it a categorically different state that he’s achieving. It just means that he is able to touch something and to see a vast landscape where we only get a sliver of that experience.” In terms of language, he appears able to converse with other humans—we see him talking to his genetically “normal” aunt in a number of scenes—yet he seems to be communicating in a non-linear, poly-lingual mode that is indiscernible.

While most ordinary citizens choose to plug in to “The Unit” – “an advanced virtual reality device that has replaced spiritual experience in humans,” Dale prefers to immerse himself in dance. Observing Dale dance is itself a transcendental experience. In the two preceding films of the trilogy, Shaw shows Pentecostal Christians speaking in tongues and new age votaries engaging with ecstatic dance and scream therapy. Instead of giving over control, Dale reaches a kind of religious ecstasy through a supra-human series of isolations, contortions and choreographic feats. While Dale’s aunt laments humanity’s loss of spiritual connection, Dale reaches a nirvana-like realm of psychic clarity, where he is able to “see forever” through dance and physical control. Dale defines this experience of reaching singularity with the universe as “the ability to transcend to a digital plane of total unity while maintaining a corporeal physical presence.”

While the trilogy has been widely shown, I Can See Forever holds a deep spiritual resonance within König Galerie, the former brutalist church complex of St. Agnes. Within the vast space, seating is organized as in a church and visitors file in, observing a religious solemnity. As Dale begins to dance, however, the atmosphere of religious observance falls away as he completes more and more incredible movements. The episode’s denouement comprises the total dissolution of the film’s cinema vérité style. The VHS quality of the film unravels as Dale’s body lags, pixelates and freezes mid-dance. Eventually, he is rendered entirely digitally. We see the pathways of his movements as he seems to pass through his own body. While we may not “see forever” as Dale does, the disintegration of the analogue provides a larger sliver of his experience.