Amidst the hustle of Gallery Weekend Berlin, two other important art events took place in the past week: Brussels’s contemporary art week and Monaco Art Week. International visitors descended upon all three European cities this weekend, with chartered jets offering collectors and journalists alike an easy jaunt between Berlin and Monte-Carlo or Brussels and Monte-Carlo. Brussels’s mainstay fair Art Brussels had another successful year, along with Poppositions, the city’s alternative fair. Artmonte-carlo, meanwhile, had similar success, although it offered a much more intimate setting. Unlike behemoths like Art Brussels or Art Basel, there were only 50 galleries and one curated exhibition, titled ‘Face-to-Face.’ Still, artmonte-carlo provided visitors the opportunity to view (and, of course, buy) expected blue-chip names—albeit within a relaxing, seaside atmosphere. After exploring some of the city’s pristine spaces, such as the storied Hotel dê Paris, Casino de Monte-Carlo and Villa Paloma, we visited the fair and selected some of our favorite works.

Due to its slightly awkward positioning within a narrow hallway that led to a larger room filled with sculptures, this video work by Lou Cantor went unnoticed by the majority of fair-goers who unfortunately dismissed it as an advertisement. Perhaps, though, this was exactly the point: Visually, the video plays like a sales pitch for a spiritual retreat in a tropical utopia, but upon a close examination of the words, it subtly and slowly becomes clear that Spiritual Reality represents the powerful reality of algorithms—often themselves unseen or disguised behind layers of what we deem beautiful. In one scene, a curling wave with the sun setting in the background was overlaid with the text, “We know what you need before you can think of it.” The algorithms are always watching us watch the waves. 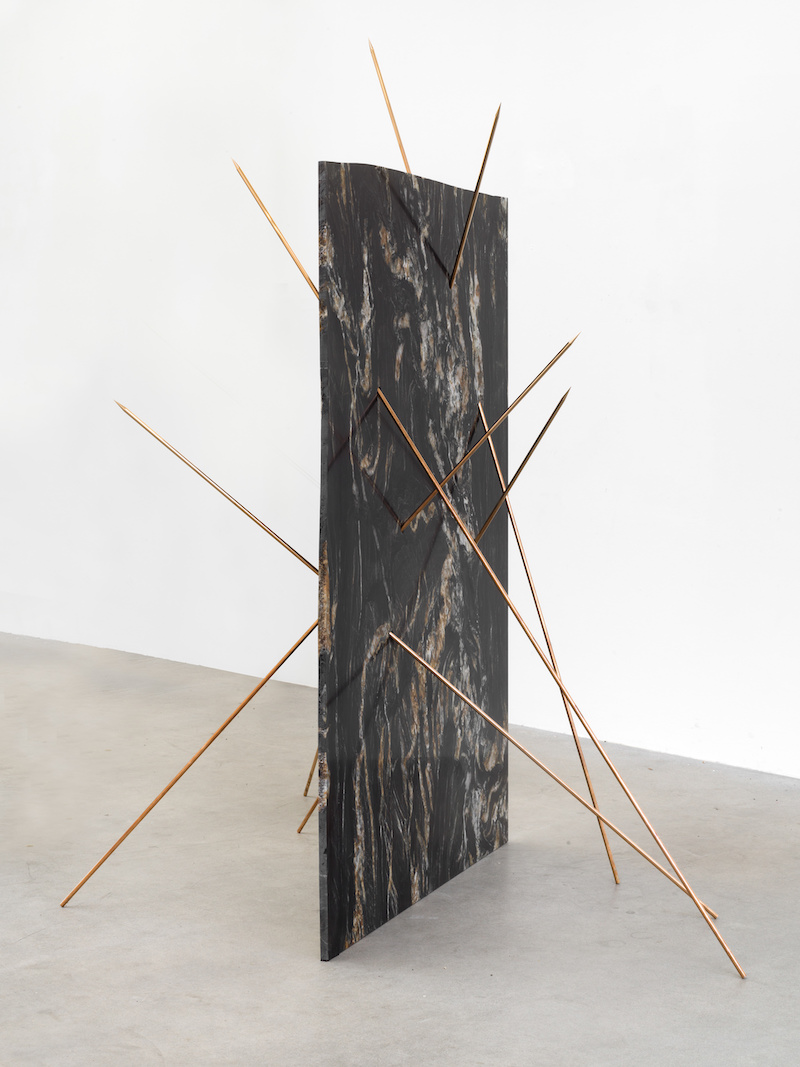 Evidenced by her current rooftop installation at the Metropolitan Museum of Art to recent exhibitions at Hayward Gallery (London), König Galerie (Berlin) and Haus Konstruktiv (Zurich), it’s no doubt that Alicja Kwade is having a moment, so it came as no surprise that 303 Gallery dedicated their entire booth to her work. This piece is part of a series of sculptures she has previously shown, each of which uses stone and bronze as a way to address the value systems that have ruled our world for centuries. Through this work, and others, she questions the inherent value of the used materials: Could gold carry the same economical weight if it were all of a sudden composed of a different chemical compound? As written in an ArtReview profile of the artist: “Kwade’s practice centres on a compelling series of mind exercises: thought experiments with space and time, jumps into parallel worlds and infinite possibilities, and wildly imaginative explorations of what’s real and what’s not.” 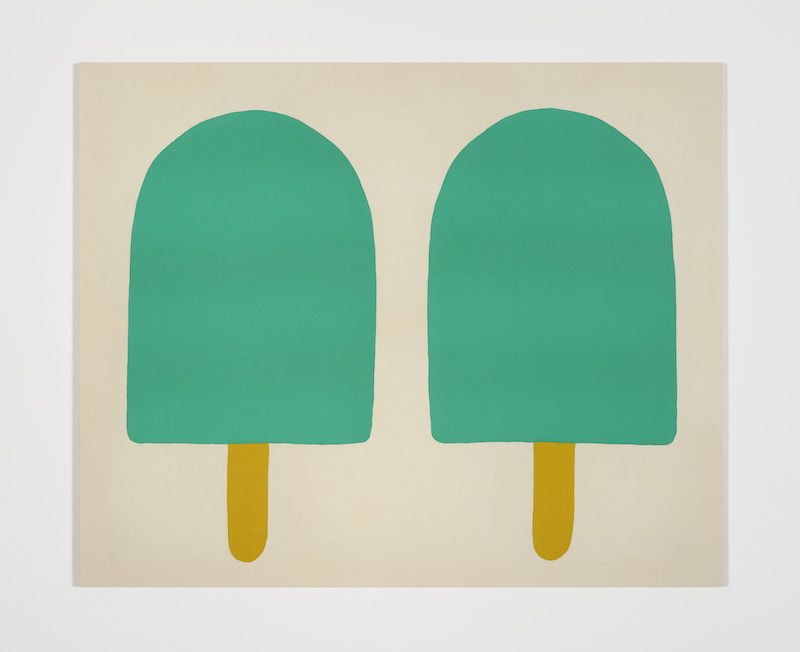 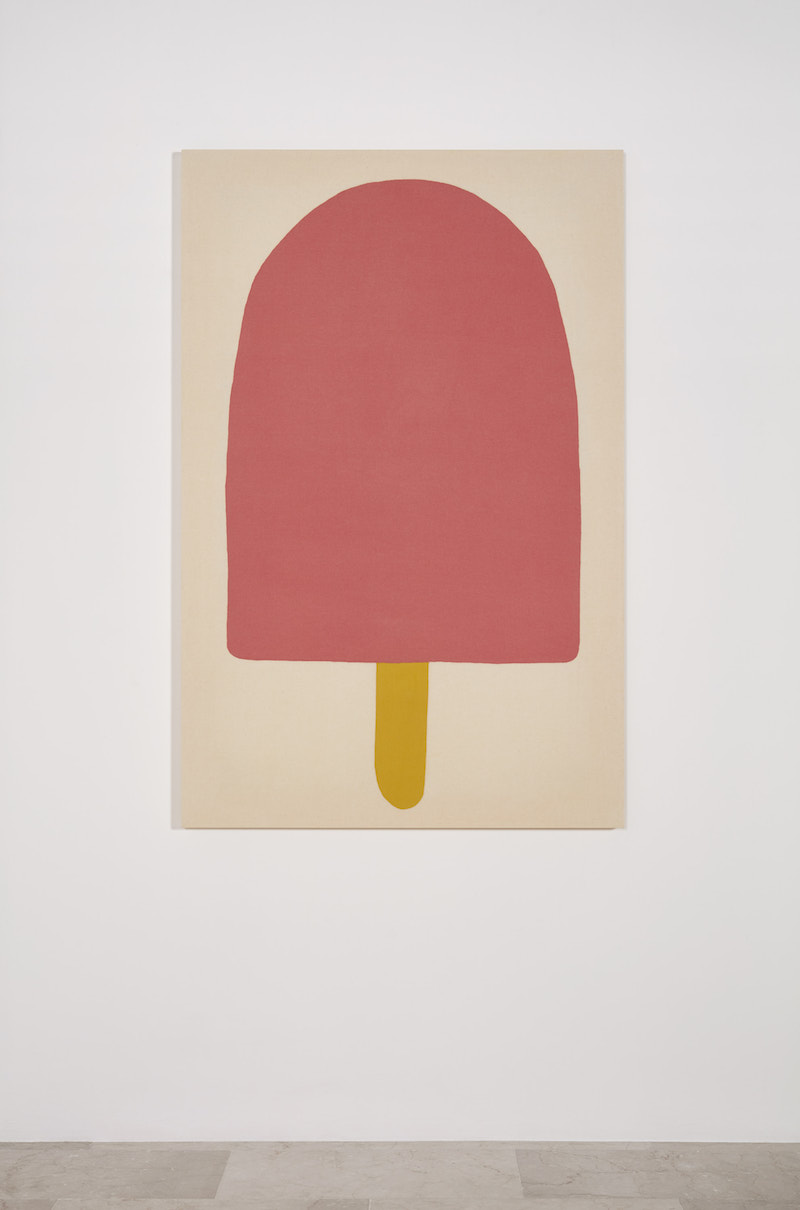 These two fabric-on-canvas works by Italian artist Adelaide Cioni provided a necessary break from the glitz and glam of so many other pieces on view. There is something about their stark simplicity and pleasant hues that grasp the viewer from afar and pull them in until they are up-close and personal, inspecting the fabric’s textured fuzz. At first it might be the works’ allusions to an enjoyable summer day, but the thickness of the fabric soon brings one back to winter and the feeling of being weighed down by blankets and sweaters. Before embarking on her artistic practice, Cioni translated American literature classics, including works by David Foster Wallace and John Cheever, for ten years. The attention to detail and style inherent to successful translation continues to be reflected in Cioni’s meticulously hand-stitched works.

Tracey Emin: ‘She Lay down Deep Beneath The Sea,’ 2012, presented by White Cube

It’s more than a safe bet to bring Tracey Emin’s work to an art fair, because who doesn’t love her? Yet it’s for that same reason she’s made our list. Emin’s work captured our attention more than the other multiple neon works on view, largely due to her characteristic poetics, handwriting and color palette. We immediately thought of Emin’s other neon pieces rendered in the same hue that read “You touch my Soul,” “Trust Yourself” and “I Can’t Believe How much You Loved Me.” Considered along with this piece’s “She Lay down Deep Beneath The Sea,” we’re reminded of what put Emin on the map to begin with: her deeply honest and intimate exploration of sexual misadventures, heartbreak, masturbation and childhood trauma, among many other typically taboo or clichéd topics. 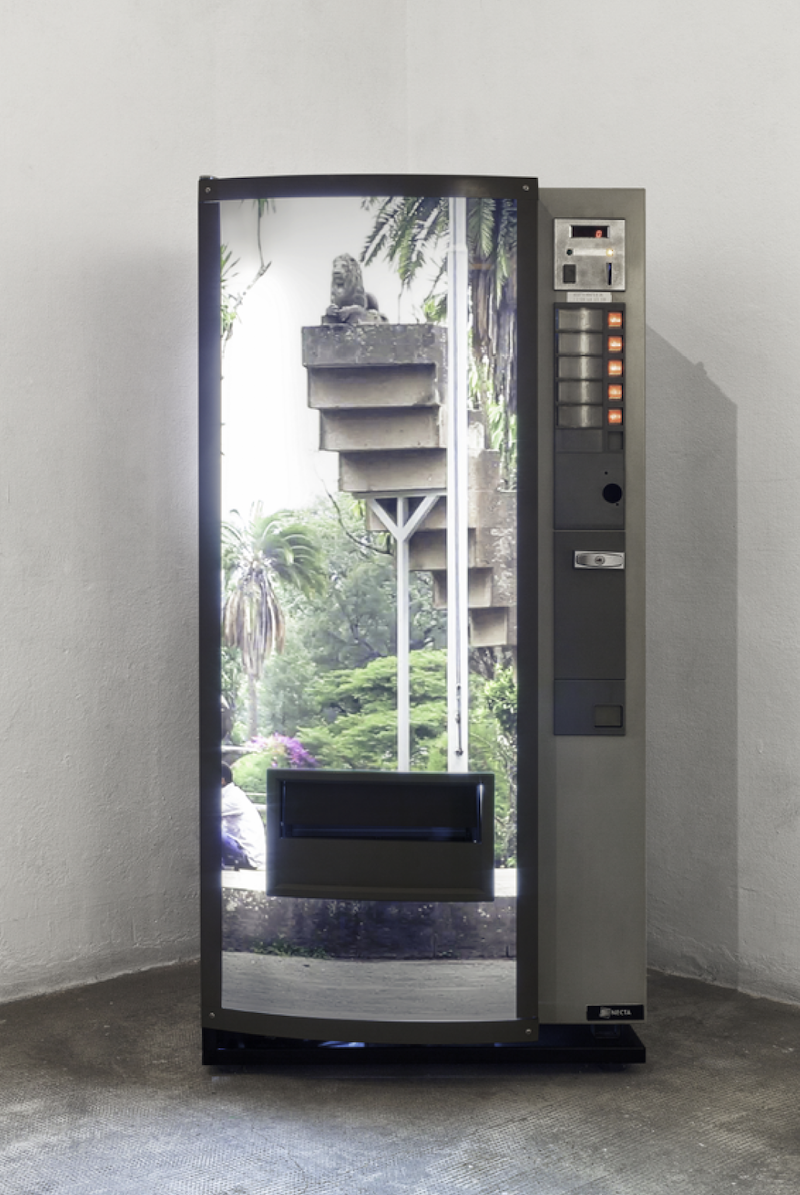 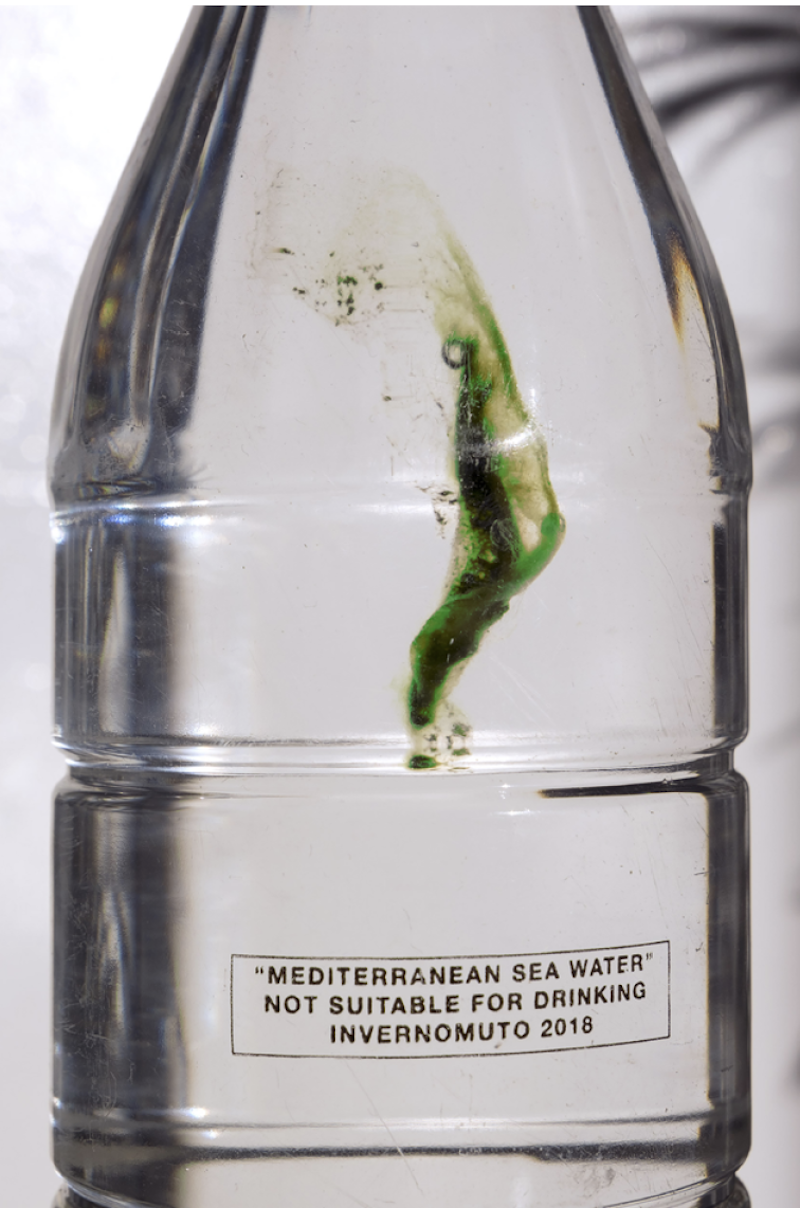 One of the few—perhaps the only—interactive works at artmonte-carlo was Invernomuto’s ‘Still da video,’ a vending machine that dispensed bottles of dirty water from the Mediterranean sea. The plastic bottles themselves were even covered in silt and one such bottle, with particularly contaminated water, is pictured in ‘Mediterranean Sea Water, Not Suitable for Drinking.’ Both of these works are part of ‘Black Med,’ the duo’s ongoing platform that was initiated as part of Manifesta 12 in Palermo. As the artists write, “The Mediterranean sea, once understood as a fluid entity aiding the formation of networks and exchange, is now the scenario of a humanitarian crisis and heated geopolitical dispute.” These two works, among others that were presented by Genova-based gallery Pinksummer, directly address how something that was once pure can easily become a polluted, even toxic, space. 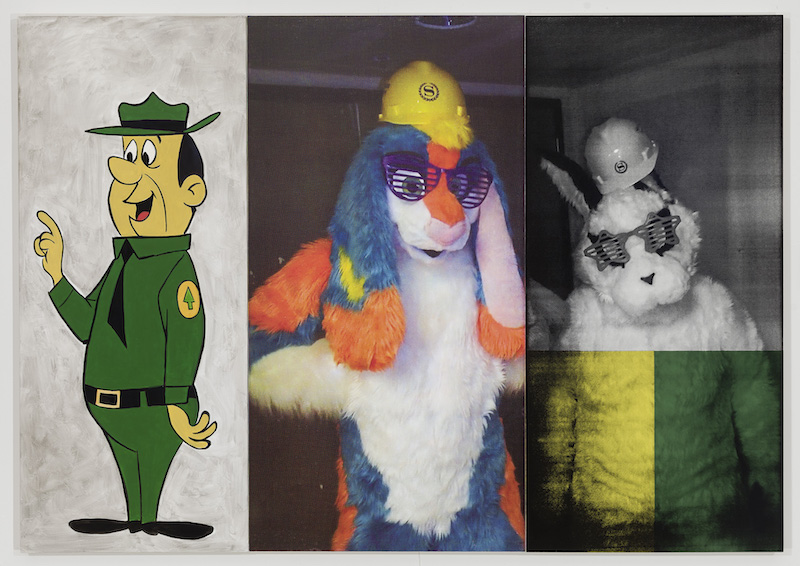 From politics to meme culture, Julia Wachtel’s artistic practice always reflects the special modus operandi of our current culture. She’s depicted everyone from Hilary Clinton and Kim Jong-un to Psy of ‘Gangnam Style’ fame, and here she humorously portrays Ranger Smith from the Yogi Bear television series alongside two “endangered” species. Her pop cultural references point directly toward Warhol, who, she has admitted, was one of her biggest influences. Looking at her process—which involves drawing, painting and screen-printing—the linkage is solidified. But she does more than portray these icons. Rather, she uses them as accessible ways to engender critical discussions. As she once said, “if you’re a fireman, I think you love fire, even if you’re trying to put the fire out. That would be a very good analogy to my relationship with pop culture. I love it, but it’s obviously extremely powerful, in a lot of negative ways, in terms of identity and self, particularly for women.”

Douglas Gordon: ‘Self-Portrait of You + Me (8 Elvis doubled inverted),’ 2018, presented by kamel mennour

Another reference to Warhol, this piece by Douglas Gordon is part of his ongoing series ‘Self-Portrait of You + Me’. After reproducing and charring part of Warhol’s initial image, Gordon inserts a mirror into the gap, thus creating a new idol to be seen: the viewer. In addition to Elvis, other celebrities such as James Dean, Catherine Deneuve and Romy Schneider have also made appearances in this series, and each one creating a new perspective and inviting the viewer to question the fantasy of truth.