American artist Maryam Jafri’s practice is decidedly research-based and interdisciplinary. When delving into a particular topic, she often examines its historical, political and economic implications, as well as how it is represented in popular visual culture. Jafri’s installations, sculptures, videos and photography borrow aesthetically from scenography and pop art, while the issues they raise often concern the insidious relationship between capital and self-optimization.

In her series ‘Wellness Postindustrial Complex’, Jafri performs an explicit critique of the trend towards wellness consumerism, which she believes “aligns perfectly with the personal responsibility and self-help ethos of contemporary capitalism and represents a predictable response to an age of economic dispossession and social fragmentation.” Humourous and biting, the works in this series make use of the material aspects of wellness culture to question its validity as a cure-all for a postindustrial economic system that fails its workers. We spoke to Jafri about her thoughts on this topic as well as her other works that target the capitalist and militaristic co-optation of health. 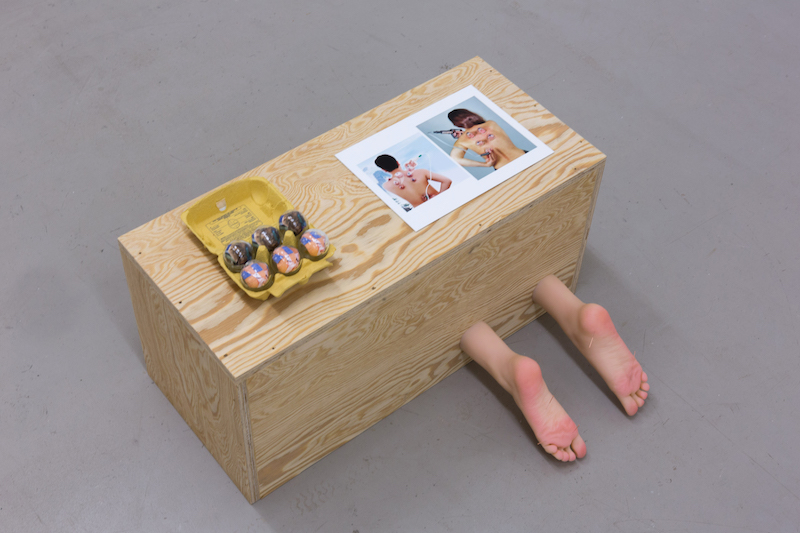 Alison Hugill: In your series ‘Wellness Postindustrial Complex’ you explicitly critique the way in which “Eastern technologies of self-care” (yoga, acupuncture, etc.) have been co-opted by late capitalism as a way of eschewing responsibility for communal care and putting the onus on the individual. Can you tell us about the concept behind this series and how it manifested in your works and their specific materials?

Maryam Jafri: Given our age of economic insecurity and now climate uncertainty, I felt the body is increasingly experienced as the one domain we can attempt to have control over. Wellness is intimately bound up with lack, pain (be it mental or physical) and existential fear: if you aren’t productive, you don’t exist. The body becomes a repository or, rather, toxic waste dump for all kinds of economic and social contradictions and these contradictions are often experienced directly and viscerally, outside of language. Thus, the works in the series present a view of the body that is rough, fragmented and above all mute. It is one of the few works I’ve made that doesn’t include the use of text, whether as a voice over or a text panel. Wellness tools (such as acupuncture needles, yoga mats, cupping glasses, etc.) are combined with objects such as silicone body parts from sex stores and low-res media images of sports celebrities, such as Michael Phelps, adding elements of perversion and aspiration. 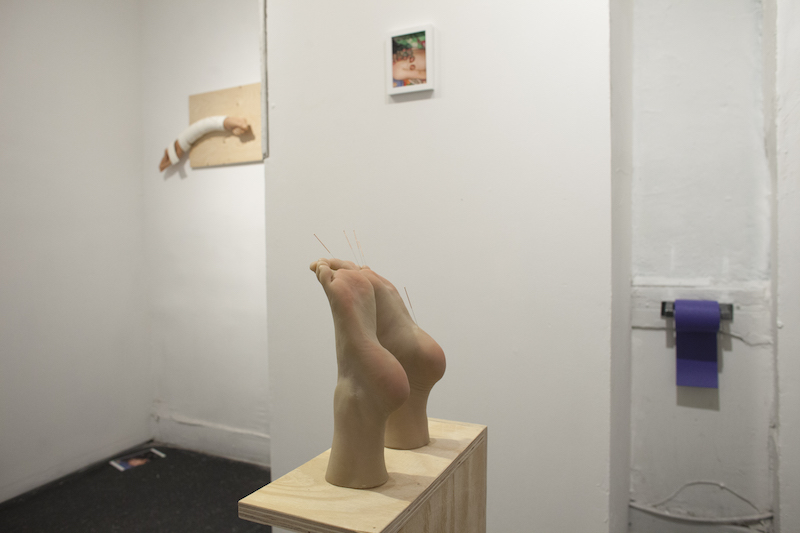 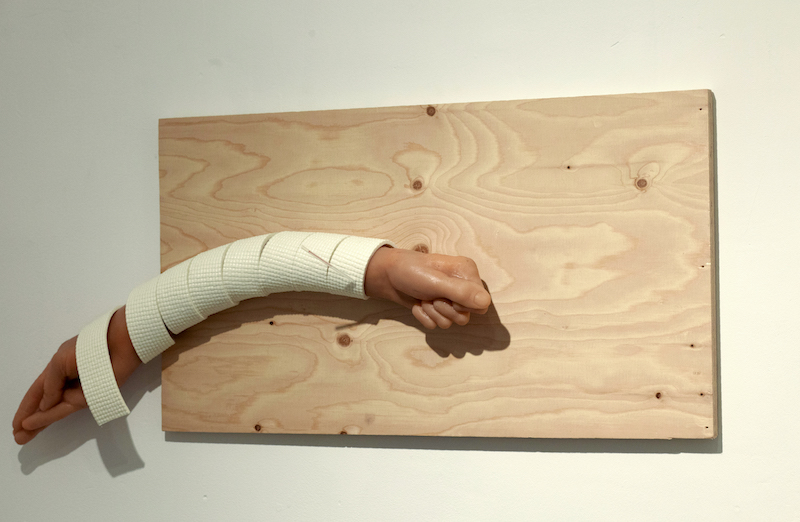 AH: What inspired the titles—’Depression,’ ‘Anxiety,’ ‘Self-care,’ ‘Schadenfreude,’ ‘ANT’—for the works from this series?

MJ: Several of them (‘Depression,’ ‘Anxiety’) were simply titles for conditions you would seek relief for and that often have a physical manifestation. ‘ANT’ is a special example, it stands for Automatic Negative Thought, a key term in cognitive behavioral therapy that focuses on treating patients by training them to reframe their thoughts. When naming the works, I was quite intuitive for the most part and I also enjoyed that, for someone like me who can be quite cerebral when it comes to art making, it’s great at times, in the process, to go with my gut and not overthink things.

AH: Your 2016 ‘Meditation Altars’ again deal with the paradoxes and absurdity of self-optimization, this time in relation to the US army’s meditation training. What do you see as the link between these works and the ‘Wellness’ series? Does it reveal itself as part of a wider Wellness + Military Postindustrial Complex?

MJ: Absolutely. What I think is most interesting is that, whereas new technologies are developed first in the military and then diffuse into the civilian realm (even fashion and processed food to some extent follow this path), wellness follows the opposite trajectory. Eastern-inspired forms of wellness started off as a fringe movement in the 1960s, went mainstream in the early 2000s and now have even seeped into the US Military. That’s an interesting reversal. 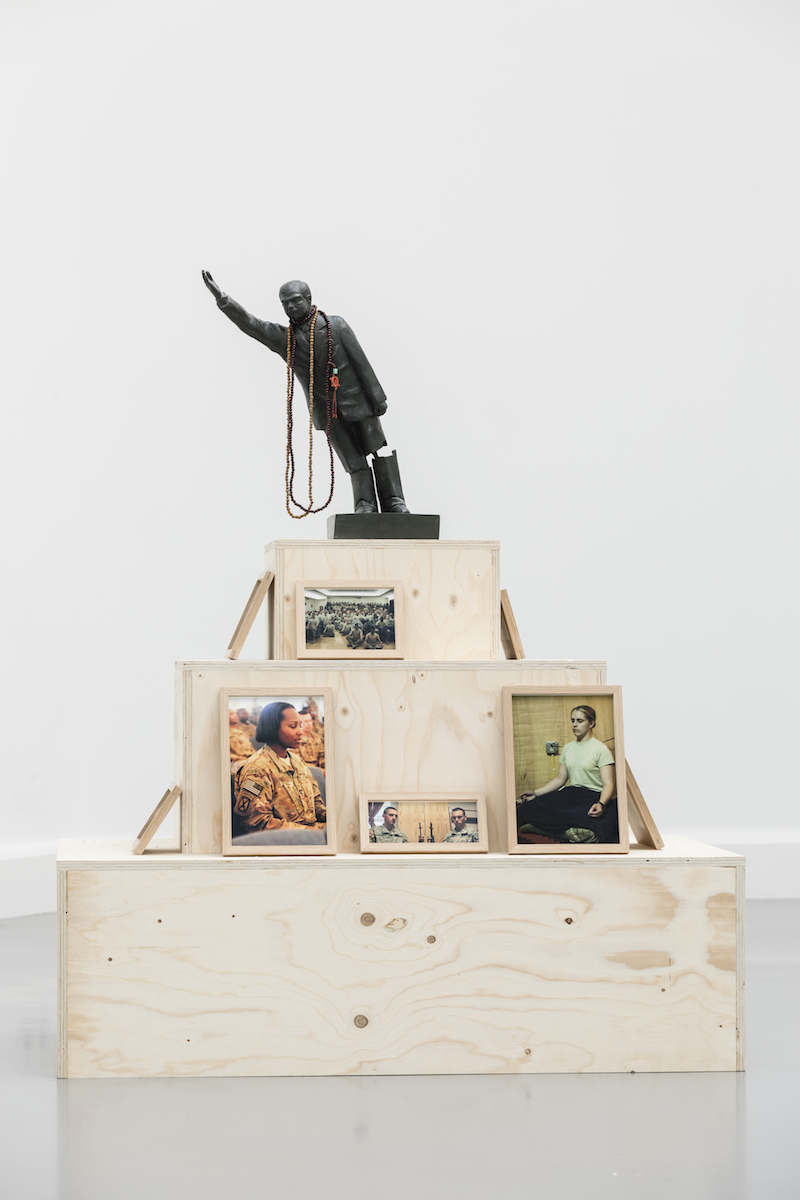 AH: ‘Generic Corner’ and ‘Product Recall: An Index of Innovation’, two of your series from 2014-15, explore the way in which food products have been branded in order to question the wider context and implications of the food industry, agribusiness and advertising language. By exposing this little known history of food production and marketing, what do you aim to reveal in the process?

MJ: Both works focus on neglected or forgotten aspects of consumer culture. ‘Product Recall: An Index of Innovation’ charts capitalism through its failures, rather than its successes. It’s a dark, pop-infused history of American capitalism: those brands that didn’t make it, those inventors that didn’t fulfill the American dream. I am very interested in vernacular histories so that is why I chose to focus on food for both projects. It’s ubiquitous but also quite lowbrow because of its association with the domestic and the feminine. Right now, of course, food is hip and we have the rise of (male) super-chefs, so I also felt it was an interesting time to look back at the way most people ate in the 20th century and still do. There are class and geographical implications, as well as major racial and gender disparities that I was interested in unpacking. The history of processed food reveals all sorts of fault lines in our culture and is the site of a massive intervention by industry, so it’s a major nexus of power. 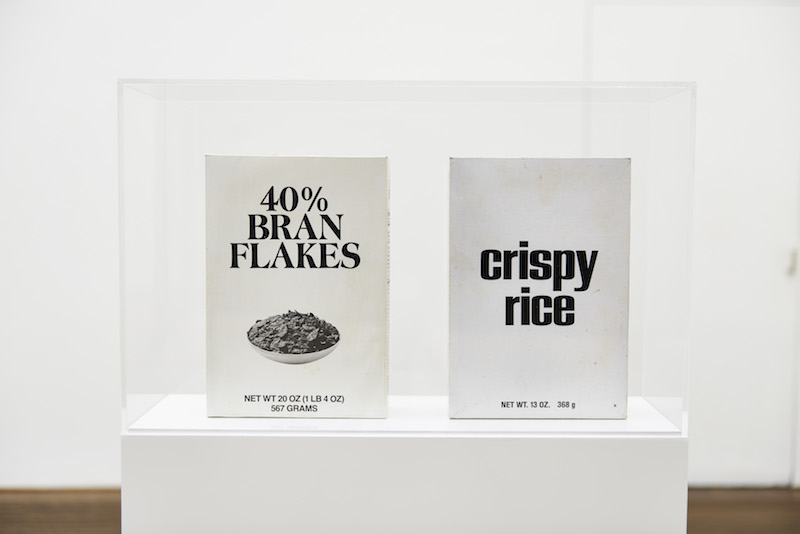 AH: Your work is often impressively research-heavy and varied in the political and historical material it interrogates. Can you say a bit about what topics you’re working on now?

MJ: Right now I’m working on an artist book focusing on my ongoing photo project ‘Independence Day 1934-1975’ (2009-). The key artistic component of the book is comprised of over 250 photographs of Independence Day ceremonies, sourced exclusively from archives in Asia, Africa and the Middle East. Over the past ten years, I have amassed a collection of more than 500 Independence Day photographs. Many of these photographs come from rare, at-risk archives or collections and have never been studied, published or exhibited before. The photos are always of the original Independence Day, the foundational images of the emerging nation-state. My installation ‘Independence Day 1934-1975’ (2009-ongoing) features 54 of these originary images but the book will be much more extensive. It’s really been a decade-long labor of love. As in the installation version, the book will feature the photographs organized in categories, presenting a typology of gestures, events and speeches during that threshold period when a colonial territory transforms into a nation-state. 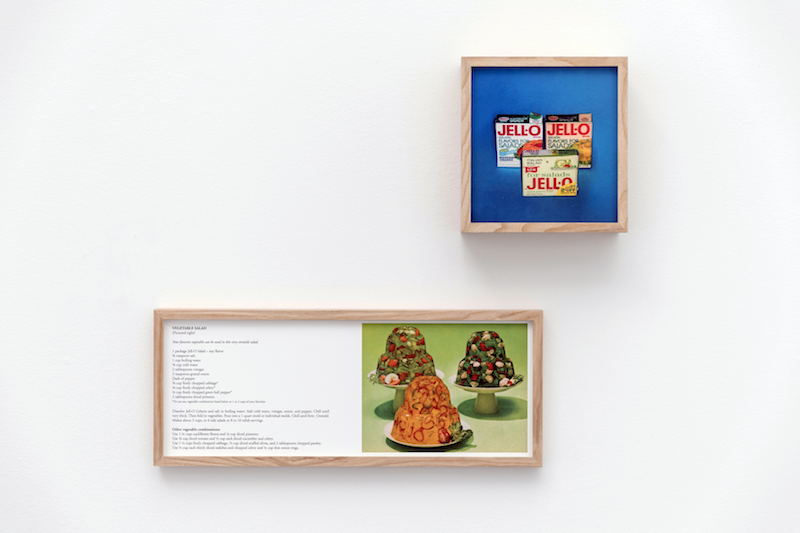