If art is an indicator of social wellbeing, Gropius Bau is an example of how major institutions act as intermediaries between state sponsors, corporate interests and their publics, suggesting the curatorial power to shape ethics. ‘CONNECT, BTS: Rituals of Care’ was part of an initiative to bring together contemporary art and pop music audiences, set up by South Korean boy band BTS. Curated by Stephanie Rosenthal, director of Gropius Bau, and Noémie Solomon and in collaboration with CONNECT, BTS art director Daehyung Lee, the series sought to explore the relationship between performance and healing; from somatic states to spiritual practices. The building was proposed to be a “conversation partner” with works that resonate with its history and physicality.

Opened in 1881 as a Museum of Applied Arts, Gropius Bau was left as a ruin after World War II. Re-opened in 1981, it stood on the border between East and West Berlin during the Cold War. The museum’s Lichthof atrium is a grand light-filled space distinguished by its patterned tiles, gilded columns and arched ceilings. I expect it was an intimidating interlocutor. 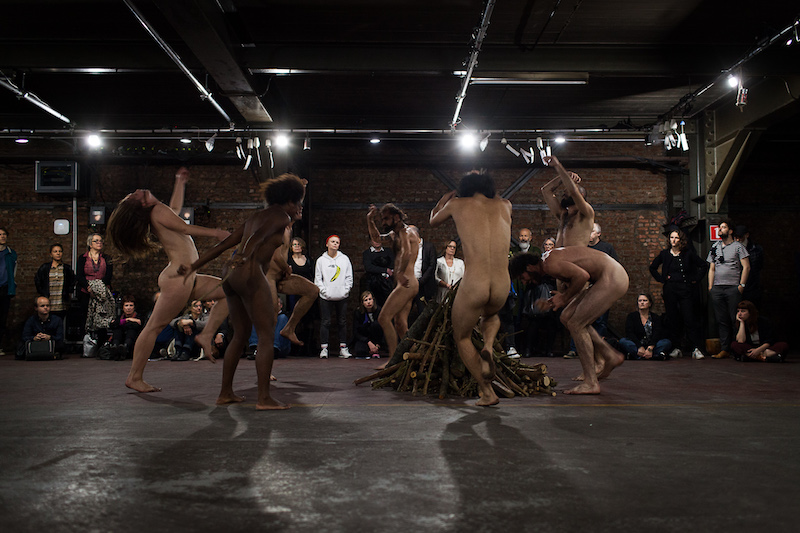 Brazilian choreographer Marcelo Evelin and his company Demolition Incorporada developed ‘A Invenção da Maldade’ (The Invention of Evil) over the first year of the country’s Bolsonaro government, which is accused of inciting violence against minorities and indigenous people. Even as this performance series began, Brazil’s secretary of culture, Roberto Alvim, posted a bizarre video on social media in which he appeared to mimic Nazi propagandist Joseph Goebbels.

As the audience settled around stacks of wood resembling unlit bonfires in the Lichthof, a group of five men and two women, all naked, entered and positioned themselves, indifferent to our gaze. A young woman, conspicuous as the sole Black member of the ensemble, initiated the performance. Pointing a stick like a divining rod, she strode purposely across the floor.

Installed on frames between the columns of the building, small fans blew air across wind chimes resembling broken plates and metal debris. Their aeolian charm was gradually subsumed by a rhythmic percussion soundtrack. As the music swelled, the performers danced frenetically. Some of the audience wriggled and rocked but refrained from joining in. The Black protagonist cackled like a witch. A pile of wood was demolished before the group lurched across the room, speaking in tongues, colliding with the audience. As the percussion receded, one performer rode another like a horse. When the wind chimes could be heard again, the performers suddenly formed into a single line with the Black performer in front and made a sober exit. 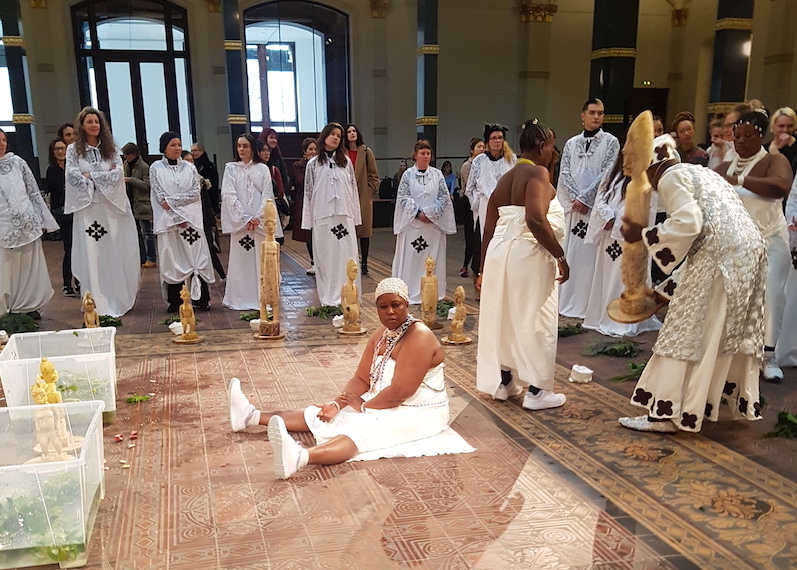 ‘The Night Has Ears’, performance at Gropius Bau, 2019 // Photo by Sumugan Sivanesan

The next day, I arrived at Gropius Bau before midday to find Nigerian artist and Human Rights advocate Jelili Atiku making the final preparations for ‘The Night Has Ears.’ Dressed in white ceremonial garb with silver trimmings, he fussed over a large extended family of rough-cut wooden sculptures arranged in a square in the centre of the Lichthof. Co-curator Noémie Solomon approached and asked if I would join the afternoon’s ritual and procession, suggesting I could report as a participant-observer. Easily convinced, I deposited my coat and camera in the garderobe and joined the others, who had signed up via an open call, in the basement dressing room.

Some minutes before we were to begin, Atiku arrived to tell us that the ritual is to heal the building and the memory of the Holocaust. He asked us to bring our energy to the ritual and, like our long white gowns, advised us to let it flow. He added that if we were drawn to one of the sculptures we could carry it in the procession. The rest of us would swish bundles of branches and leaves to move the energy around, which we were informed was female. With that, Atiku and the three Yoruba priestesses—Taiwo Agbede Babatunde, Kafilat Abeni Raji and Biliki Asake Adeyemi—ushered us up the stairs and into the atrium.

The ritual began with one of the priestesses casting conch shells onto a blanket laid out onto the floor. After a few throws and what I gathered were satisfactory results a sacred Wiwe ritual unfolded. The sculptures were bathed vigorously one by one in a mixture of water, plants, alcohol and saliva held in large plastic storage containers. Throughout the ritual Atiku repeated a salutation—”Ahy–pa–lia–lo”—and the priestesses responded “Axé!” Eventually, they mounted the sculptures onto the heads of those willing to accept them, cushioned within a white folded cloth. I was later told that they were ancestor figures.

Another divination was made with something that looked like a betel nut, before we were led out the rear door of the atrium and into a courtyard. Walking in circles in the cold while Atiku and the priestesses sang, we built up some momentum before we entered the street. Some passersby stopped and stared, others smirked and asked what we were doing. I wondered if being in public reduced the ritual to novelty and I thought to myself that Western art must somehow suffer for its secular rationalism. 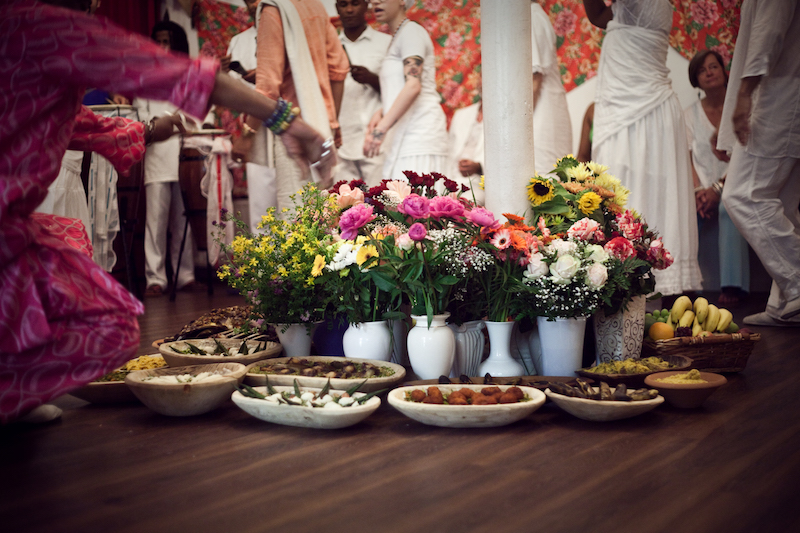 On Sunday, I arrived at Gropius Bau a little before 2pm, but the Lichthof was already at capacity. Through the glass doors I could see Baba Murah and twenty or so members of Candomblé Berlin assembled at the entrance, dressed in white and singing enthusiastically. Racing upstairs to watch from the balcony, I saw four shrines arranged around the room, before which were seated Orixás—deities who personify natural forces. There was Xangô, holding two double-edged axes; Iansã, flicking her oxtail whip; and Oxum, dressed in gold and white representing beauty and fertility. In the centre of the room was an empty shrine for Obaluaiê, an Orixá feared as the overseer of pests and diseases such as smallpox. The group, clapping and singing, wove their way between the shrines with the audience trailing, eventually arranging themselves in one corner before a set of consecrated drums.

‘The Magic of Healing’ is more like a choreographed performance than a ritual, with Baba Murah leading the group through songs and sequences that illustrate a creation myth. Raised in São Paulo and Bahia, Brazil, Murah Soares had a career as a choreographer and dancer in Berlin before founding Germany’s first Candomblé temple, Ilê Obá Sileké, in Kreuzberg in 2007. While the group sings, the Orixás emerge in turn from their shrines to dance and interact. Murah commands attention as the ringmaster of the ‘cultural show,’ eventually donning a straw headpiece, an attribute of Obaluaiê, before leading the procession out the rear door of the atrium. 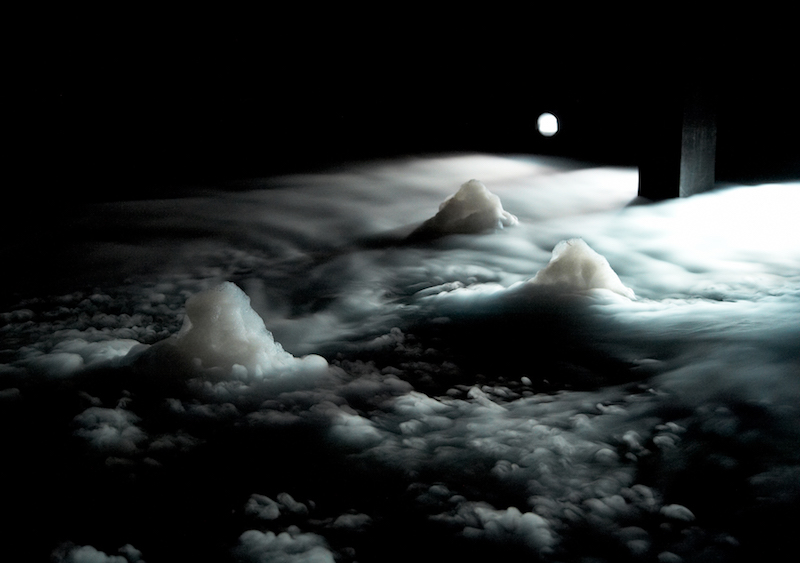 Danish choreographer Mette Ingvartsen also presented three works. For ‘Evaporated Landscapes’ five foam sculptures flickering with white light stood on the floor of a small pitch black room. The audience sat around them on tiered bleachers as a technician at the far end of the room manipulated a long-hosed contraption from which flowed a steady stream of dry ice, as a subtle soundtrack of trickling water played in the background. A single red light shone a beam above the sculptures, making drifting bubbles appear like flying embers. The sculptures flickered and glowed red as the soundtrack intensified and then faded. The lights went on. The floor was wet.

The audience for ‘Manual Focus’ sat on one side of a white cube space. Three naked white women entered from an entrance at the far end of the room. They turned away from the audience and put latex masks over the backs of their heads with the faces of three bald men, all similar but not the same. The women bent over, with their hands on the ground and moved together in formation, scuttling like crabs. They stacked up on top of each other, like plastic chairs, then separated. Staggered, they came to rest on the floor. The masks had the effect of androgynising their bodies; twisted back-to-front, their backs became bare chests and their feet faced the wrong way. The piece invited us to look at white women’s bodies, but subverted our gaze, as what we saw contorted. Their masked faces fixed with half-smiles looked back at us, even though we knew the performers were always looking away.

Ingvartsen’s collaboration with Will Guthrie, ‘All Around,’ took place in the Lichthof with the audience seated in a ring around a gold drum kit lit by two white neon tubes. The pair entered the circle and Ingvartsen picked up a tube as Guthrie began to subtly manipulate a cymbal. Similarly, Ingvartsen, dressed in black trousers and a white t-shirt, slowly spun the tube with her fingers, perpendicular to the floor. As Guthrie built up a complex rhythm, Ingvartsen turned the tube faster and with bigger gestures. When she picked the tube up in both hands and turned, I thought of an electric whirling dervish.

Guthrie continued his percussive ascent and Ingvartsen’s movements became more vigorous, the tube changed its tone, radiating a warm reddish glow. Soon she was swinging the tube at right angles to her body, gyrating in the enclosed space; wheels within wheels. Guthrie drummed to a crescendo and then stopped abruptly, as did Ingvarsten. Her light tube, returned to its initial state of neon white, was placed back on the stand near Guthrie’s kit, before the duo stood to receive their applause. 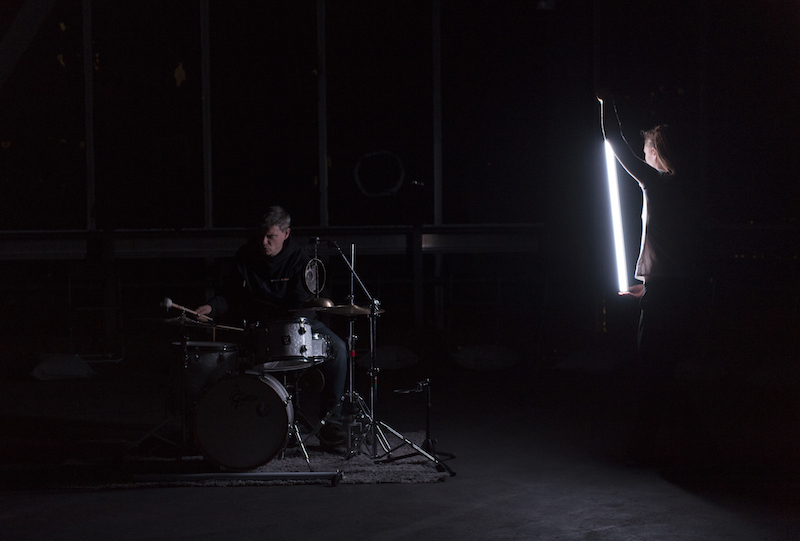 Mette Ingvartsen and Will Guthrie: ‘All Around,’ 2019 // Photo by Marc Domage

Of Ingvartsen’s works presented, ‘All Around’ cited ritual trance, yet firmly maintained its status as contemporary dance/performance. In contrast, Atiku and the Yoruba priestesses undertook a religious healing ceremony, which was largely indifferent to the audience. While Evelin and Demolition Incorporada left the room charged with a performance-ritual that slipped between caricature and cliché, some worried it was Candomblé Berlin who were “exoticised” for their joyful choreography. I’m inclined to think that the program showcased the local terreiro’s community, nevertheless I wondered why African/African diaspora representations and spiritual practices were emphasised during this opening weekend and, specifically, how they framed and relativised Ingvartsen’s works concerned with paired-back aesthetics, affect and shifting physical states. While her formal, conceptual and political concerns seemed to fit seamlessly with the institutional character of Gropius Bau, it struck me that they could have been performed in any white/black cube space. Although impeccably executed, I found them to play to the literacies and expectations of European contemporary art audiences, which made us seem somehow readymade. So while Ingvartsen’s works were not overtly “in conversation” with the building or its history, perhaps her sleek professionalism mirrors the institution and our own self-assured façade?