The Africa Museum, located in Tervuren, Belgium, is like the ‘Poltergeist’ House. The original idea of the museum came from Leopold II, King of Belgium and owner of the “Free” State of Congo, in 1897: to exhibit imported African objects in order to share the mission of the nation in the then-colonised Congo, while hiding the genocide he was instigating in the Central African country. Over the last century, it has remained as a kind of uncritical timepiece. Last year, Grace Ndiritu visited this space with one goal: to decolonize and heal the museum. She wanted the audience to open their eyes, to acknowledge that there are other ways to see things and to abandon the Cartesian dualism of body and mind.

In her essay ‘Ways of Seeing: A New Museum Story for Planet Earth,’ she writes: “The Western tendency to see the world as a ‘dead’ place—and the Indigenous peoples who use traditional ecological knowledge to communicate with Nature and her objects (natural or manmade) as playing make-believe—causes us to consume endlessly and pollute carelessly. If we think Earth is a dead planet, why care for her (it)?”. To stop the necrotic process (to use a term proposed by Paul Preciado) of Western museums, Ndiritu engages curating processes in a series of initiatives encompassed under the title ‘Healing the Museum.’ We talked to her about this and about why she wants to call 2020 “The Year of Black Healing”. 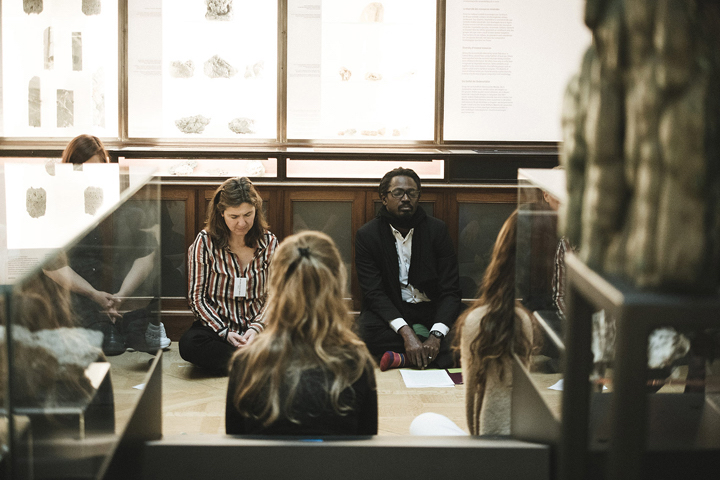 Juan José Santos Mateo: Where did your motivation to begin a healing process within the artistic context come from?

Grace Ndiritu: My motivation comes from my extensive lived research in esoteric studies, which I began just after I finished my studies in Amsterdam. Around that time, I began a serious yoga and meditation practice and this coincided with my first exhibitions; which meant the entire trajectory of my art career has been influenced by this knowledge on some level.

JJSM: Tell me about your series of works ‘Healing the Museum.’ Why do you think the museum needs to be healed, and why do you think an initiative like that can be effective in this context?

GN: At the foundation of the ‘Healing the Museum’ methodology is the idea of using performance as a type of “peace building” tool. It came out of a need to re-introduce non-rational methodologies such as shamanism, to re-activate the “sacredness” of art spaces. I believe that most modern art institutions are out of sync with their audiences’ everyday experiences and the widespread socio-economic and political changes that have taken place globally in recent decades have further eroded the relationship between museums and their audiences. Museums are dying. I see shamanism and meditation as a way to re-activate the dying art space as a space for sharing, participation and ethics. Various factors have inspired this new way of working. Firstly, I grew up in an activist household with a feminist mother who believed in the power of grass-roots politics. Secondly, in trying to answer these questions: How can we see contemporary art as a tool to activate good in the world? How can the general public regain the faith they have lost in contemporary art and museums to remake the world and show a different way forward? 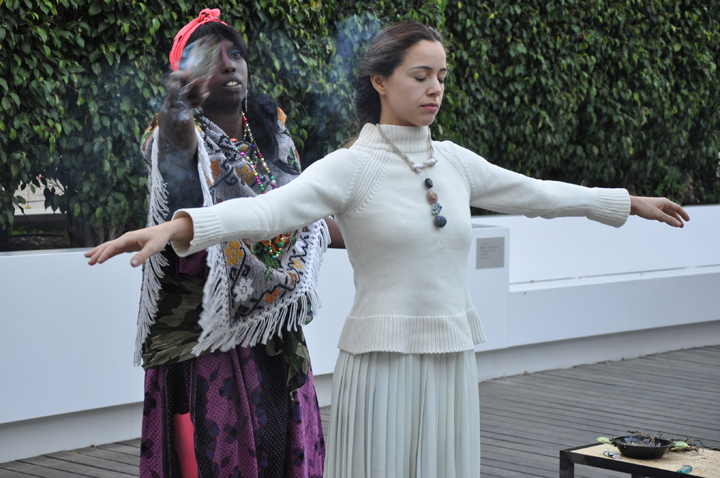 Grace Ndiritu: ‘Dreaming the Museum Back to Life: The Inner Life of Objects,’ 2017,
Fundació Antoni Tàpies, Barcelona // Courtesy of the artist

JJSM: Meditation classes, cooking sessions, roundtables with medical doctors, academics, shamans and refugees are among your tactics. What kind of reactions do you get with the activities initiated in your projects?

GN: Usually I get a very good reaction, as most people welcome a chance to learn a new skill, expand their self-awareness and their knowledge of the world around themselves. Also, because I try to create a safe and playful environment, it is much easier to go deeper into debating and trying to find solutions for difficult subjects like the refugee crisis in Europe. But this is what happened during my performance project ‘A Meal For My Ancestors: Healing The Museum,’ which involved working with staff members of the U.N., NATO and the EU parliament and activists and refugees, at Thalielab Brussels for four months. Instead of judging or condemning actions taken by either side, work in the lineage of Truth and Reconciliation (i.e. focusing on topics that the participants have in common, on topics of healing trauma by using food, shamanism and meditation). This experience resulted in one of the participants from the EU Parliament writing a briefing paper and starting a think-tank to discuss climate change and refugees; directly inspired by the performance and these non-rational methodologies. And, for me, this shows the power of art to make real world change.

JJSM: Do you have any concern that one of the participants won’t get involved, or might see your proposal as something exotic, even touristic?

GN: Yes. I have some concerns that the art world as it opens up to working with spiritual practice will co-opt it for neoliberal purposes and perpetuate a type of “spiritual materialism.” And by this I mean the main problem will be when artists start working with esoteric symbology or working with these kinds of processes but they’re actually not aware of what they’re doing, or they don’t have a personal connection to it or they don’t actually understand the power of what they can do. In that case, they may become fodder for the museum PR-machine because it looks like they’re doing something very interesting and it looks kind of radical. But if they understand the actual energetic power then they won’t be a bargaining chip; if they’re not just doing something because it’s a new art world trend, then they’re not just a sitting duck. They’re only vulnerable if they don’t know what and why they’re doing it. 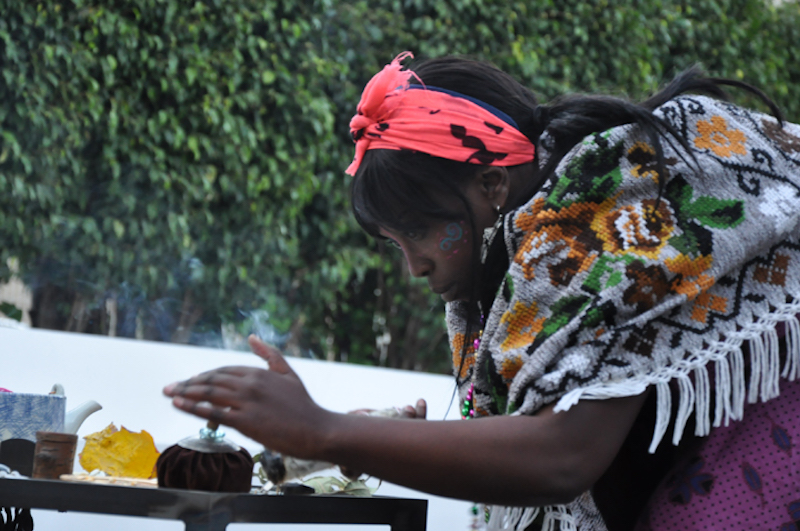 JJSM: Although your works can be playful, you have done projects in places with an overwhelming symbolic and historical load, such as in the Africa Museum in Belgium. How can you deal with these spaces without abandoning the constructive and encouraging posture? Are all spaces “curable”?

GN: Yes, this was a powerful occasion as it was part of my ongoing research into Decolonizing Museums, in which I work with students and staff in different museums to talk about the problematic objects in their collections. So far, I have done this at the Design Museum in Ghent (2019) and the Museum of Anthropology in Vancouver (2020). The performance you mention that took place at the controversial Africa Museum, Tervuren in May 2019 is part of the project ‘Everything Passes Except the Past’—organized by the Goethe Institut—which involves a small group of museum directors, activists, scientists, artists and academics coming together in different European Museums to debate the issue of repatriation of museum objects back to their countries of origin. So far, these closed workshops have been in Museu Etnològic i de Cultures del Món (Barcelona), Museo Musée d’Aquitaine (Bordeaux) and Culturgest (Lisbon) and this October there will be a type of public festival at Fondazione Sandretto Re Rebaudengo in Torino, to visually share some of this research. This will also be a highlight of what I am calling “2020: The Year of Black Healing,” in order to counterbalance the co-opting of Black culture by politicians to promote their own agendas, such as President Macron’s declaration that AFRICA 2020 is the year of celebrating African culture in the entire French territory.