Hidden in the hinterhof of a GDR-era apartment block, Galerie Neu is an unexpected find. The former power station that would have once heated the stacks of surrounding flats currently houses a show that similarly reveals stories surrounding the complexity of urban space. ‘The Same Room: Julie Becker in dialogue’ takes as its starting point the interdisciplinary practice of American artist Julie Becker, who lived her entire life in Los Angeles and was well-attuned to the harsh realities of living on the peripheries of a rapidly developing city. A selection of her photographs, drawings and videos are presented in dialogue with recent works by Jesse Darling, Win McCarthy and Ima-Abasi Okon, in a show that uncovers real and imagined urban worlds and the precarity of living in a metropolis. 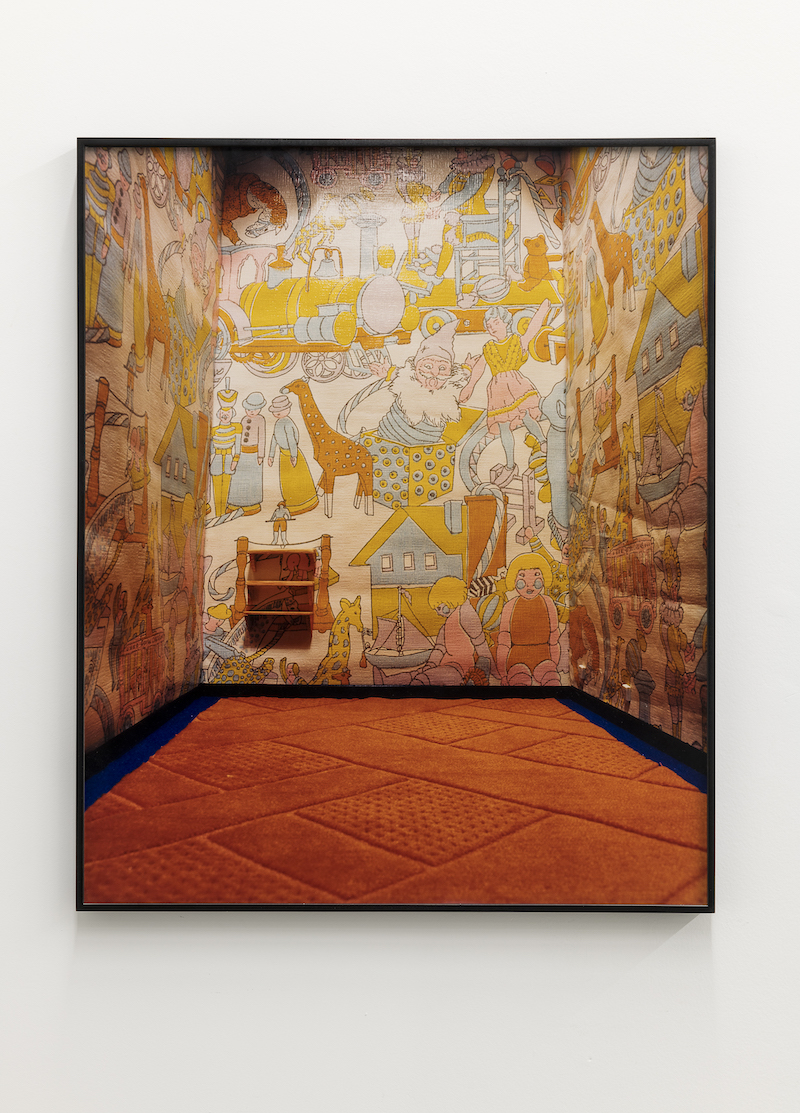 Entering the space you become aware of the dimmed lighting in the entrance room, though it’s not immediately apparent that something has obscured the regular lighting. A lowered ceiling comprised of standardised modular systems commonly found in offices or waiting rooms alters the original architecture of the gallery. The metal grid holding 104 white fissured ceiling tiles—a work by Ima-Abasi Okon—deceives you for just long enough to disorient, and makes for an oppressive welcome to what is, overall, a quietly uneasy exhibition.

In the gallery’s main room, this subversive approach to space and, more specifically, scale, continues. While studying, Becker began her prolific investigations into the fabrication and fantasy of urban spaces, both real and fictionalised. In the photographic series ‘The Same Room’ and ‘Interior Corner,’ Becker obscures the scale of existing interior spaces and staged models to the point where the real becomes fake and vice versa. These stark, saturated images of what could be empty apartments or abandoned hotel rooms punctuate the works of the other artists, who have followed in Becker’s exploration of physical and psychological realms. 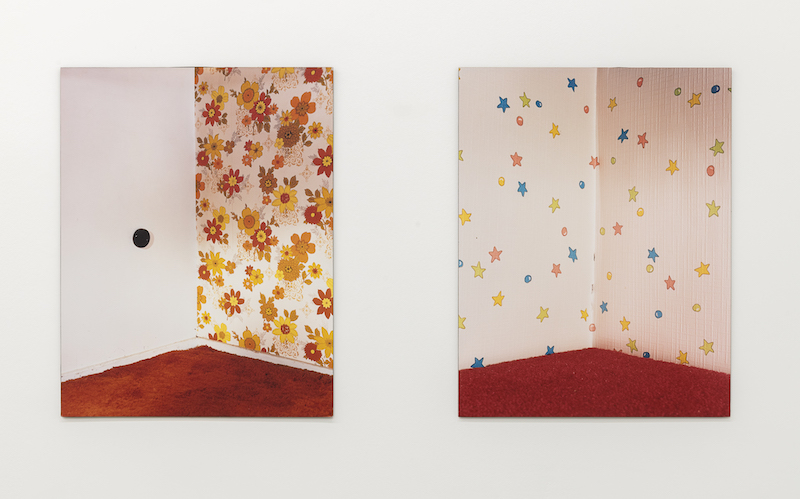 Venturing towards the voyeuristic, McCarthy’s ‘Empty Volume’ (2019) is comprised of a fridge door, with butter, probiotics and food containers, encased in a glass cabinet. With the uncanny resemblance of a multi-story complex, the upper level (the freezer door) is slightly off-kilter, perhaps a suggestion that current modes of urban living are at the brink of collapse. Similarly, Darling’s ‘Virgin Variations’ mimic the modularity of apartment-block life through the presentation of a wooden locker system, with each compartment donning its own personality through ad-hoc dioramic assemblages of found objects, photographs and general street-refuse. Here, you get a sense that, while those living a privileged IKEA-catalogue life in mega-metropolises may have the illusion of individuality, the reality of the pigeon-holed existence of late-capitalism is more restrictive than it seems. 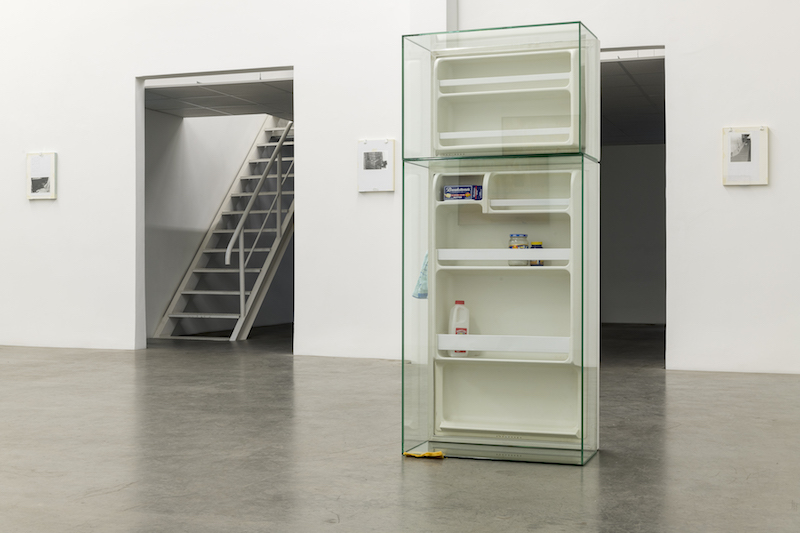 As you continue, through Okon’s false ceiling to the second level of the gallery, you glean crucial insight into the life and mind of Becker. Dedicated to the uncertainty she faced living in the gentrifying outskirts of LA from the late 90s to the early 2000s, these works evoke a profound sense of loneliness and compulsion. As the sole tenant of a neglected building owned by California Federal Bank, Becker paid reduced rent with the agreement that she would clear the basement of the belongings of its former inhabitant, a man who had passed away from AIDS-related illness. As well as being an endless source of inspiration to Becker, this grim reality presents an interesting lens through which to view the more contemporary works, with the realisation that, decades on, similar problems of gentrification persist.

Of the works from that era, ‘Federal Building with Music’ exemplifies Becker’s dark-humoured perspective on an often bleak reality. The twenty-nine-minute film plays like an ironic love song dedicated to the bank that is not only her landlord but the central view from her window. Shakey, Super-8 film taken of this vista is interspersed with footage of a scale model of the drab office building as it is winched between floors of her derelict block. An upbeat soundtrack of a Mexican tecnobanda outfit from a cassette that Becker found discarded in the car park of the bank plays in the background, offering a surprisingly optimistic take of an otherwise dark story. 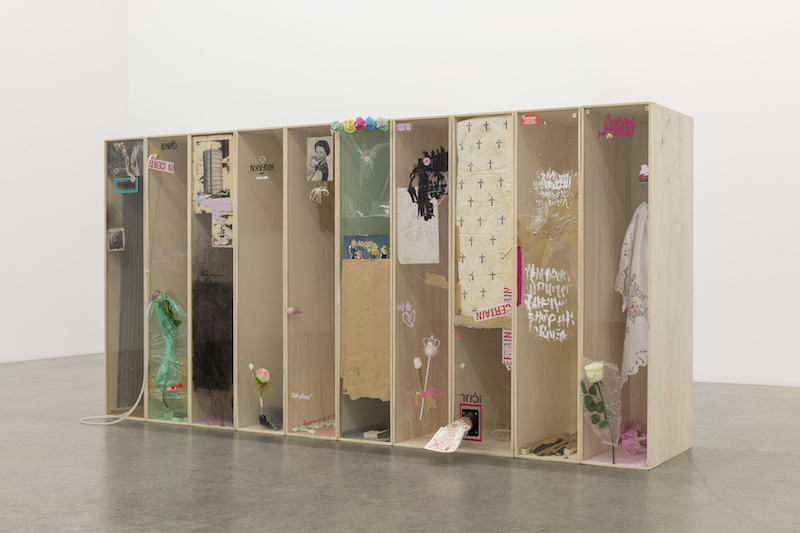 This catchy, fast-paced rhythm also makes for an absurd backing track to the other view that is apparent from the top floor of the gallery. Two rectangular windows frame the seemingly endless balconies of the surrounding apartment buildings. In these private spaces, laundry hangs and plants are watered, and yet it is as though they have been purposefully curated into the space. In this exhibition, you get a glimpse of the inner lives of the artists through their subversion of space, scale and imagination and this even cleverly extends to our (very real) outer world.

It wasn’t until I was leaving the gallery that I noticed Darling’s small-scale cardboard diorama titled ‘Votive/Apologia (for and after Julie Becker)’. Quiet and unobtrusive, it encapsulates the bare emotion hidden beneath Becker’s photographs, films and drawings, and emphasises the impression she has left behind through her expansive and often under-appreciated body of work. 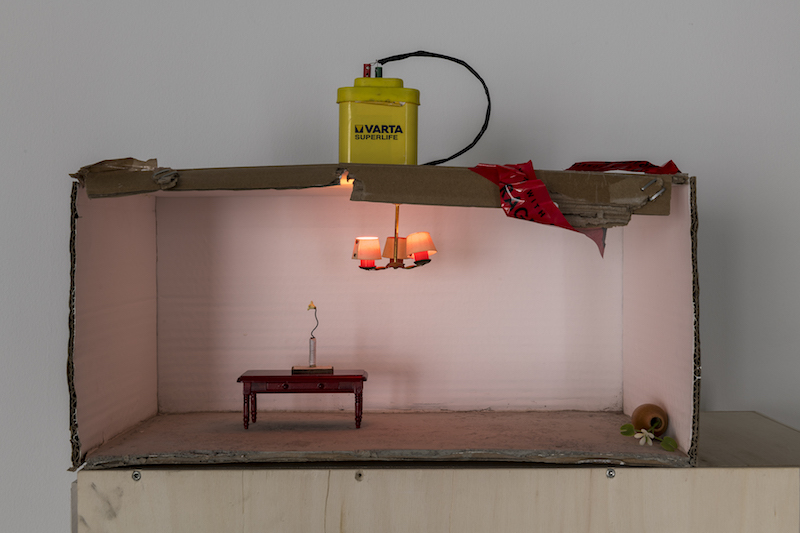