Since July last year, Australia-born, Berlin-based artist Melanie Jame Wolf has been a resident at the Künstlerhaus Bethanien in Kreuzberg. The expansive, high-ceilinged studios—complete with simple living quarters—are a coveted resource for artists internationally. Though Wolf has lived in Berlin since 2011, she welcomes the opportunity to develop her practice at Bethanien over the course of this strange pandemic year, and her use of the space is a testament to the ways in which her projects are expanding within and beyond the studio’s dimensions. Since she began working as an artist in 2009, Wolf’s practice has moved from the realm of theatre and choreography to an exploration of moving image and installation. 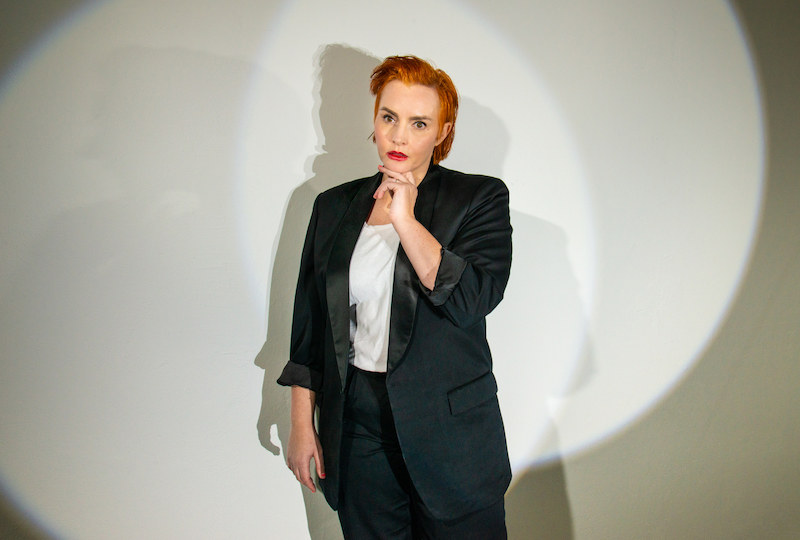 Wolf’s costumes, the emblems of the many personas she inhabits in her works, are hung on metal shelves at the entrance to the studio: a chain-mail hood, a lounge suit and a medusa-like head ornament are just some of the guises on offer. On the far side of the room, opposite the door, a stage light is set up, shedding its circular projection on the otherwise bare wall. An archetypal, pompom-ed clown costume hangs on another wall, the arms improbably long, draping to the ground and framing a fragment of checkered, diner-floor tiles. While the costumes have always figured prominently in Wolf’s practice, their position as stand-alone objects and installations is an exciting new turn in the artist’s work, showing her deftness with textiles as well. 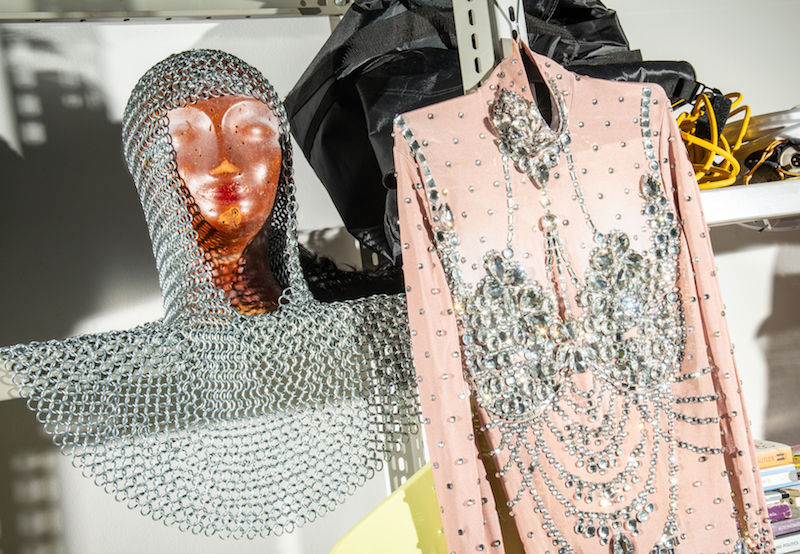 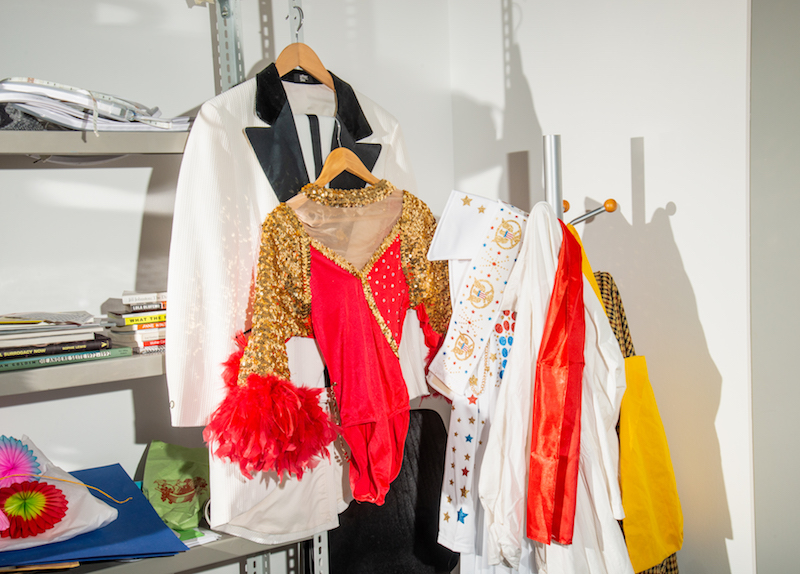 We sit down at the long desk in Wolf’s studio to speak about her latest work, ‘Acts of Improbable Genius.’ The two-channel, looped video installation will act as her submission to the John Fries Award exhibition in Sydney this March. Wolf is one of seven finalists for the award, invited to contribute a new or previously-made piece to the show. Though she won’t be able to attend in person, she’s thrilled about the chance to develop her cinematic language with the new piece and to present it in her home country.

The film presents two divergent personas, both played by Wolf herself, with a grating, raucous and familiar 90s sitcom laugh-track. She has been perfecting one of the characters over many years: “Stand-Up Ron” has finally found a home in ‘Acts of Improbable Genius.’ As Wolf explains, the piece is about “the erotics and politics of desire in comedy: who gets to be funny and who doesn’t.” The film presents Ron, a stand-up comedian, alongside a more classical character, Pierrot the Clown. Pierrot is the epitome of the “sad clown,” who has had many different incarnations across time. In France, he was traditionally perceived as the revolutionary underdog everyman. Wolf notes the violent irony of an “everyman in white face.” For her, it’s important that the characters and themes she displays in the work are rigorously and critically understood, and not just through a feminist or gender lens. “Looking at something as a libidinal economy,” she explains, “allows me to do an intersectional analysis: it’s about class, it’s about desire, it’s about gender. It’s about all of those things.” 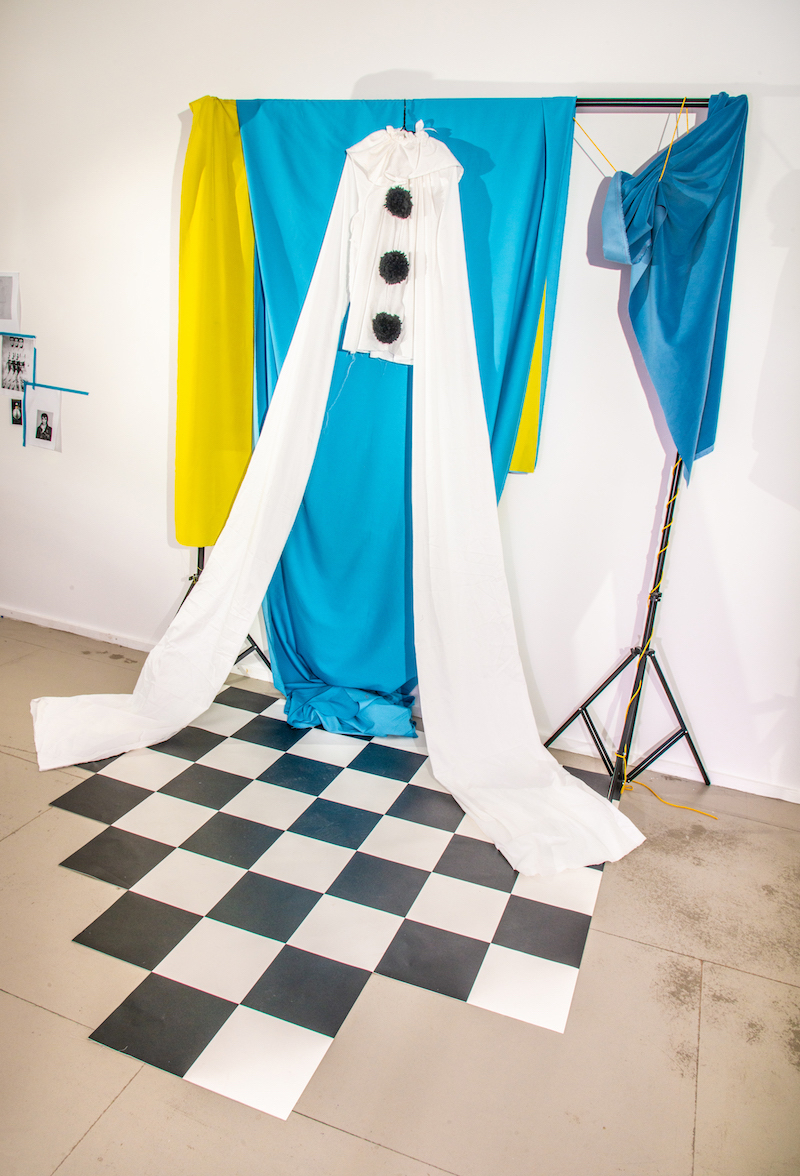 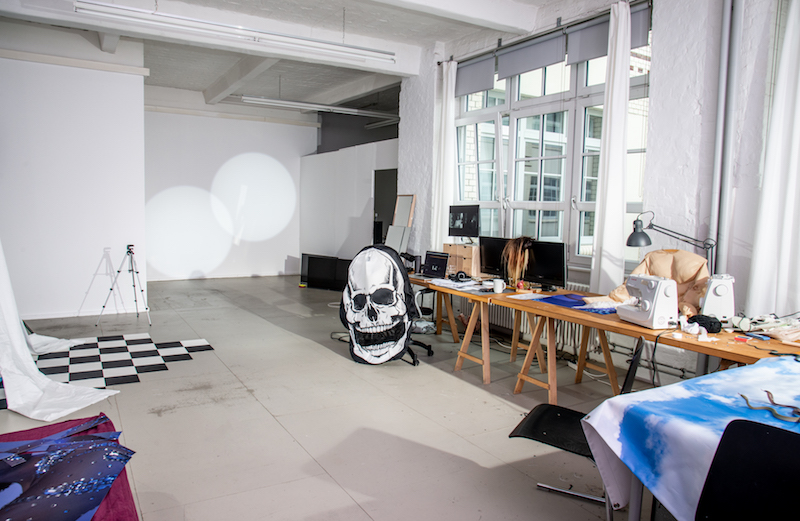 In the film, Pierrot and Ron are both ghosts, cementing their status as anachronisms, belonging to a by-gone world. “Pierrot is very aware of their hauntological status,” Wolf tells me, “but Ron has no idea that he’s dead.” We take a look at a rough edit of the film, which Wolf shot the week before in the Delphi theater in Weissensee. It has a stark, black-and-white 1920s silent film aesthetic, making the availability of the historic location, due to Covid closures, a serendipitous option. I think I’ve seen a version of Stand-Up Ron in Wolf’s 2019 performance ‘Tonight’ at Sophiensaele, but Wolf tells me that character was, in fact, known as “Lounge Guy”. “Lounge guy,” she explains, “is a colleague of Stand-Up Ron.” Ron is a hyper-confident dude, though not conventionally attractive. His comedic persona oozes masculine entitlement. He’s a walking “who has two thumbs and…?” meme. It’s no wonder he is blissfully unaware of his own lifelessness. Pierrot, by contrast, is the embodiment of the word ennui. Presented side-by-side, they offer two extremes, shedding light on our own abilities to experience a vast range of comedic modes, as well as the ways in which the nature of comedy has evolved over time.

Wolf’s take on drag—which she enacts in her portrayal of Ron, making him into a “magnetically fuckable” version of his true self—is indebted to the work of Renate Lorenz, particularly her ‘Queer Art: A Freak Theory.’ In it, Lorenz speaks of drag as an assemblage, not just in terms of visual elements, but also from a temporal perspective. The notion of “trans-temporal drag”—the image of dragging something through time, with all of the debris that sticks to it—is essential to an understanding of how Wolf’s practice functions. 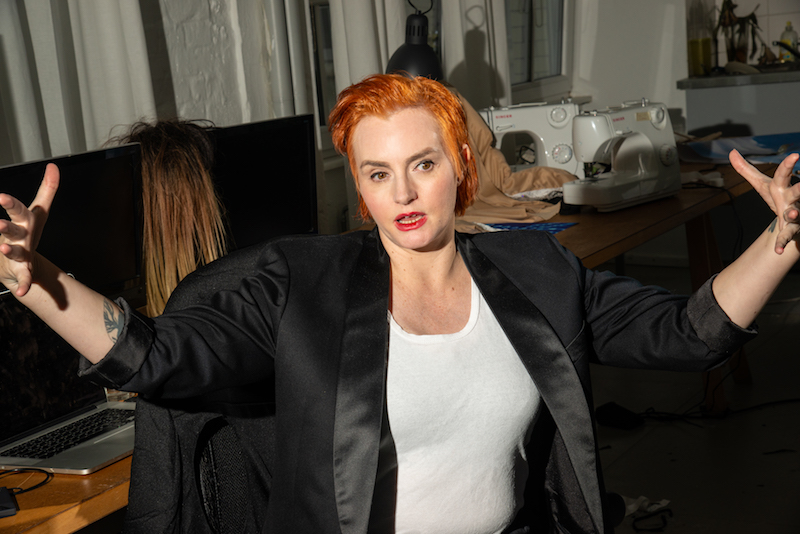 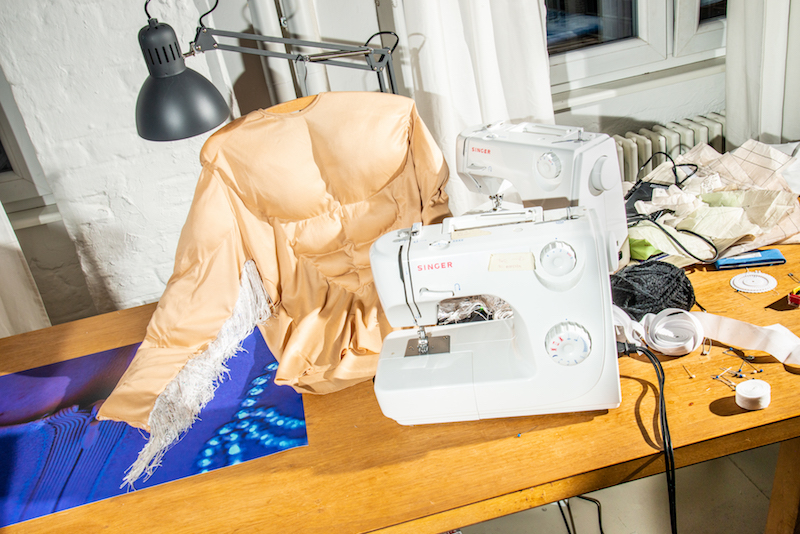 Wolf has another project in the works, in which she plans to make an experimental documentary about impersonation. Similar to ‘Acts of Improbable Genius,’ this project considers the libidinal economy surrounding professional impersonators. As Wolf succinctly puts it: “My whole body of work is about creating a critical taxonomy of performance technologies.” For her, performance is a potential technology for survival, “an engine for fluidity of subjectivity, from a queer-feminist perspective.” 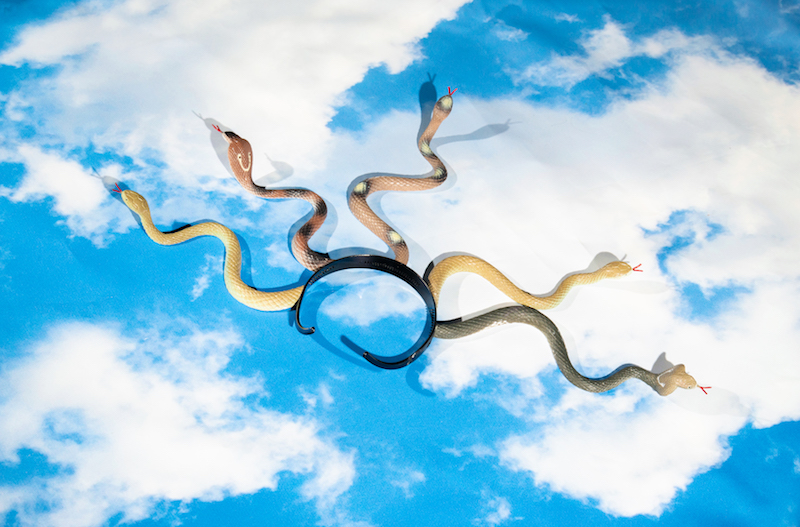 One of Wolf’s earlier works, ‘Mira Fuchs’ (2015), is based on the artist’s own eight-year experience of working as a stripper in a Melbourne gentleman’s club. From the performative labour of sex work—a more obviously erotically-charged form of work—to the hidden erotics of other kinds of theatrical or even mundane posturing, such as the performance of care work, Wolf’s practice interrogates the “pleasures of inhabitation and shape-shifting,” particularly with regard to those people who are “skillful at modulating the affect of a space.” What is the relationship between “star quality” and the ability to, say, effectively minimize a violent situation in an emergency? Comedy, amusement, diversion all function, for Wolf, as de-escalation tactics. 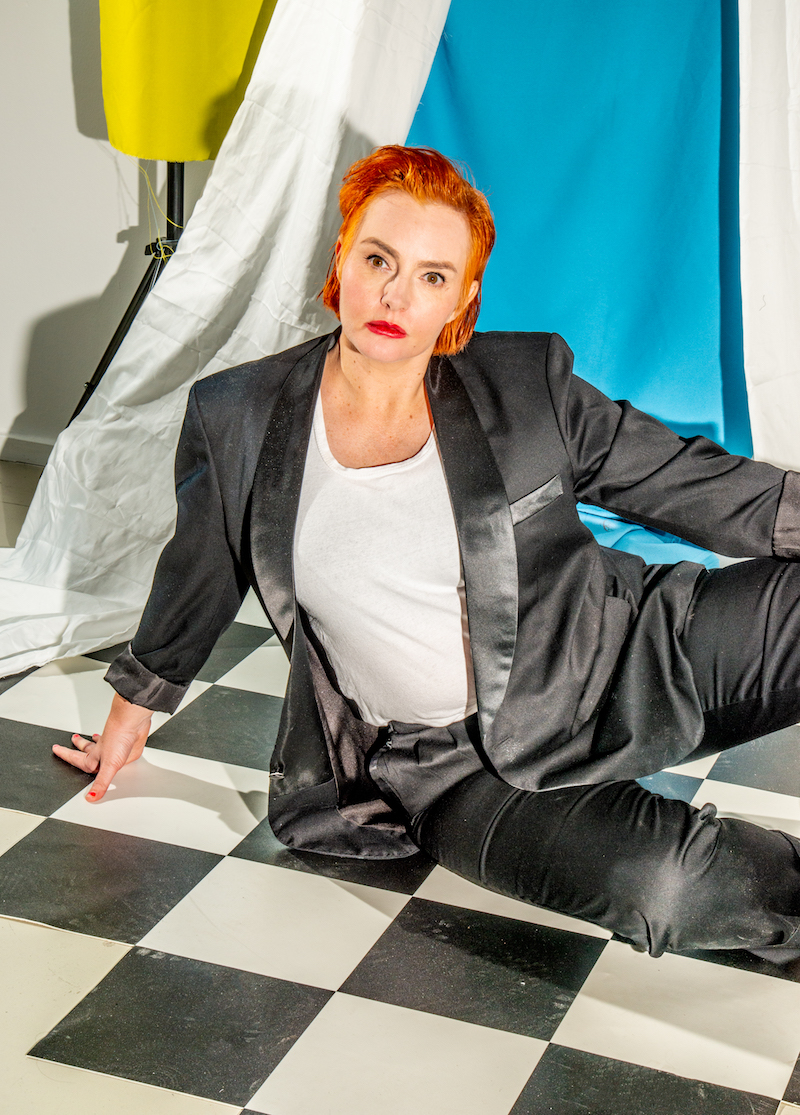 Her studio practice at Bethanien this year offers Wolf the room to examine new dimensions to this line of thought, and to go deeper into her character inhabitations. In February, Wolf has two online performances to look forward to: a reiteration of her piece ‘Tonight’ for Sophiensaele’s online program, as well as a performance as part of Montag Modus. Her first Berlin solo exhibition, ‘Two Years Elapse Between The Third And Fourth Acts,’ will open at Künstlerhaus Bethanien in April.