Petrit Halilaj slips into one of the two costumes lying on the floor. Suddenly, there is a big fuzzy creature with a bushy tail and a mask-like band of black around its eyes standing in front of me. The over-sized raccoon is not well received by the other animal in the room, a dog named Indy, whose human companion, Catherine Nichols, is curating this year’s Manifesta in Pristina. Indy grunts. We laugh because we know this raccoon is a fake. But Halilaj undresses promptly, not wanting to upset the dog. For him, the costume is real. The raccoon is the alter ego of Halilaj and his partner and artistic collaborator Alvaro Urbano. Later, while browsing through ‘10 interesting facts about raccoons’ online, I find out that this wild animal is extremely skilful and can survive almost anywhere. Isn’t every artist a skilled survivor too? 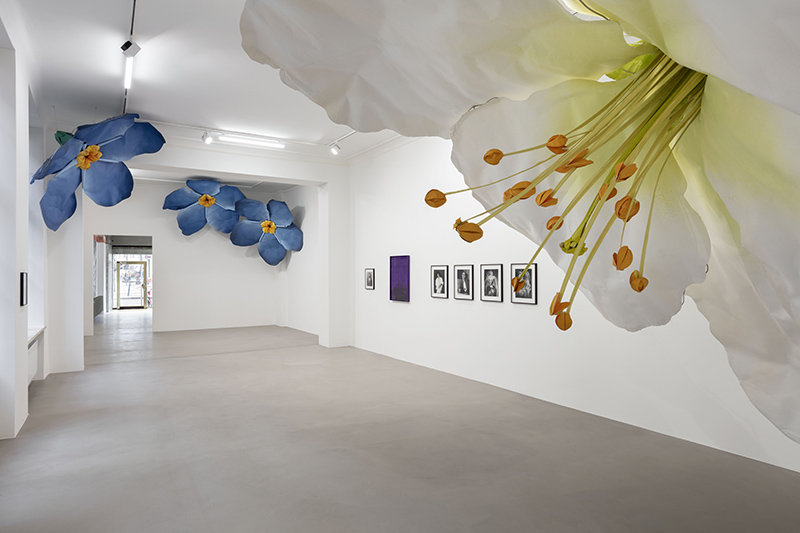 ‘Die Blüten von Berlin’ is the title of the very first exhibition in ChertLüdde’s new space in Hauptstraße 18, Schöneberg. The poetic title has a touch of the absurd to it, similar to Marcel Broodthaers’ film ‘Berlin oder ein Traum mit Sahne’ from 1974 or Marlene Dietrich’s ‘Du hast ja keine Ahnung wie schön du bist Berlin’ from 1965. Originally, ‘Die Blüten von Berlin’ was the title of a 2001 punk song by Berlin icon Ovo Maltine. “Unser Glanz ist nur geliehen,” it goes. “Wir sind wie Falschgeld und Kopien.” The late Ovo Maltine is depicted in the exhibition in a photo by Annette Frick, who is exhibiting alongside Halilaj and Urbano. The drag queen is wearing an extravagant headdress with long, dangling tentacles, designed by fashion designer and performer, BeV StroganV. It somehow matches the daffodil she holds in her hands. Both persona and flower are artificial, but as Oscar Wilde (whose favourite flower was the daffodil) aptly stated, “Acting naturally is a pose, and the most irritating pose I know…”

That costuming is intrinsic to creating the self, was well known at Deko Behrendt where for the past seventy years, masquerades have been celebrated. In 2022, ChertLüdde has taken its place and does so respectfully, by using materials salvaged from the renovation of the space they now occupy, as well as documenting its past clientele. The exhibition, I’m told, is an homage to this institution of dressing up, cross-dressing, transvestism, and queer fashion. Annette Frick has photographed some of the costume store’s customers after she moved to Berlin in the nineties. One of them was Gunter Trube, whom she befriended at the cult bar Kumpelnest 3000, where the deaf activist and performer was bartending. We see Trube in the different stages of transformation, applying make-up and then adding the dress and the wig. It is hard work to get it right. 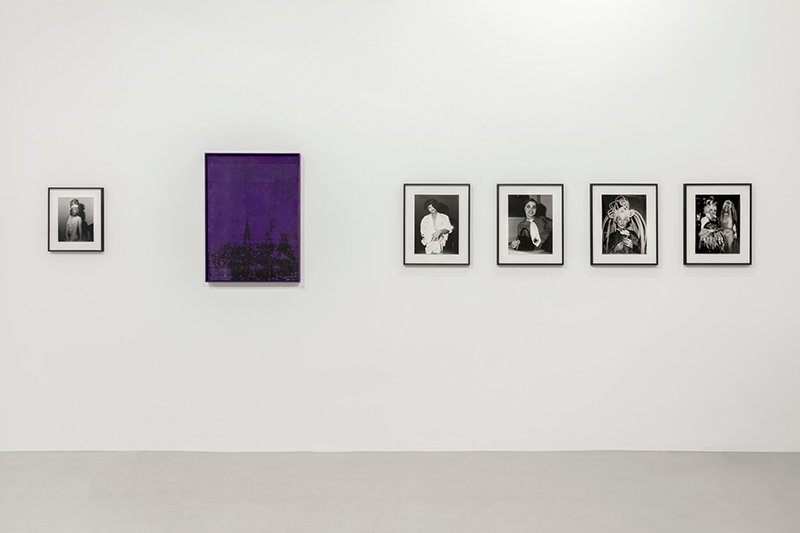 Another portrait series shows Juwelia Soraya, who performs every Friday night in her Galerie St. St. in Neukölln. In Frick’s photos, she poses elegantly, whilst tearing down wallpaper in a project space under renovation. Andy Warhol, a pioneer in the creation of artistic wallpapers, once said that “If you want to know who Andy Warhol is, just look at my face, or at the surface of my work. It’s all there.” Captured on camera in her own Warholian moment, Juwelia reveals the blank wall behind the patterned wallpaper. However, a different situation was presented to Chertlüdde while renovating the former Deko Behrendt. The colourful wallpaper kept appearing, layer after layer. So Halilaj and Urbano decided to make paintings from them. The compositions of colourful sheets are now delicately framed and are titled, ‘I Never Saw Blue You’ (2022). The gallery attendant suggests that I can also look into each work as a kind of mirror. So I go through the various addendums of the series, from ‘(Copper)’ to ‘(Pink),’ ‘(Teal),’ ‘(Purple),’ ‘(Green),’ ‘(Orange),’ and, there it is, ‘(Blue).’ 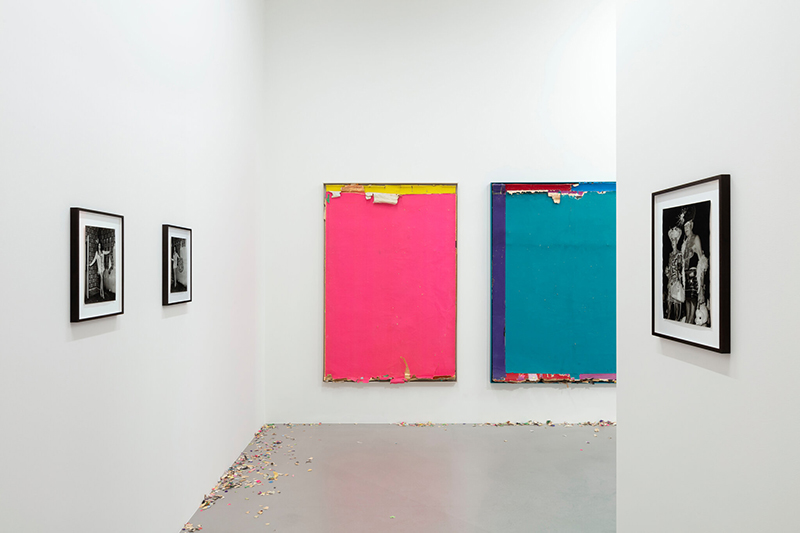 Fiction can help to tell the truth. The image of who we are requires that we alter and over-elaborate in order to make it come alive. But can one live forever in an image? In the gallery Halilaj and Urbano have installed huge flowers made out of steel. The scaffolding of the blooming cherry blossoms and forget-me-nots hanging from the ceiling is not hidden from the eye. It is perfectly fine that we know these flowers are fake. With this knowledge we can rest assured they will never wilt or droop. And they are lucky for it, because they have come a long way: from a postponed wedding in the Crystal Palace in Madrid in 2020, to the national library on the fifth annual Pride Parade in Pristina in 2021, to this former costume shop in Berlin in 2022. The flowers, in the context of the exhibition, are a thank you to the queer scene that paved the way for the artists’ love to be sealed in marriage—something that is still considered illegal in Halilaj’s home country of Kosovo.

Yet, despite the flowers, the wallpaper paintings, and the photos of its loyal customers now exhibited at ChertLüdde, Deko Behrendt no longer exists. The act of transformation, supported for decades by the store, now finally reaches the space itself. You might remember a narrow long store where you would weave your way from room to room, between costumes, wigs, tombstones, spaceships, dentures, make-up, contact lenses, glitter foils, skeletons, garlands, party tableware, masks, Halloween masks, cowboy hats, and zombies. If so, you will be amazed how spacious this new gallery is, with its high ceilings, big windows and lofty rooms. At the entrance, a wall-sized black and white picture of the cluttered store in its early years shows exactly what has changed. 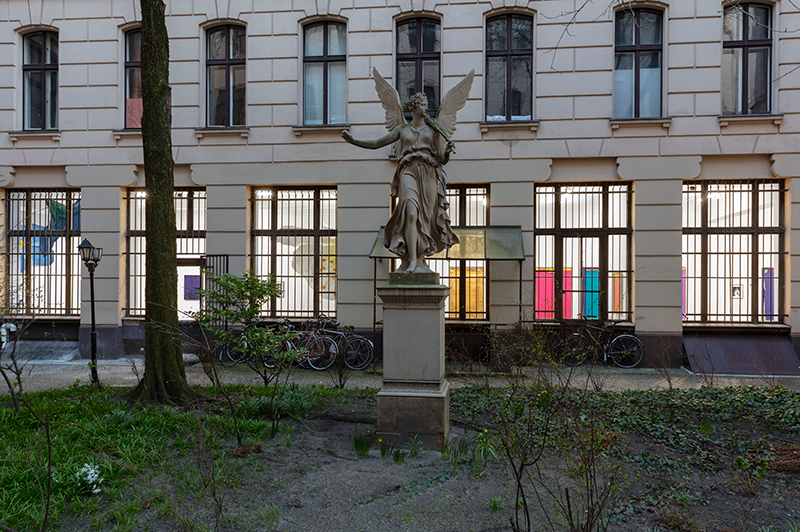 At second sight, however, ChertLüdde is also packed. The illuminated white signage panel above Deko Behrendt was kept and turned into the DEKO project space, which will be activated yearly by an artist. David Horvitz picked a watercolour text from his artist book ‘Nostalgia’—‘becoming a unicorn using a banana as a horn’—to serve as the gallery’s 2022 street sign. Then there is a bookstore with all kinds of finds, like a newspaper from Manifesta (in which Halilaj will participate) and limited editions like, for instance, ‘There are bodies tired from the journey seeking to root’ (2022) by Sofia Salzar Rosales. 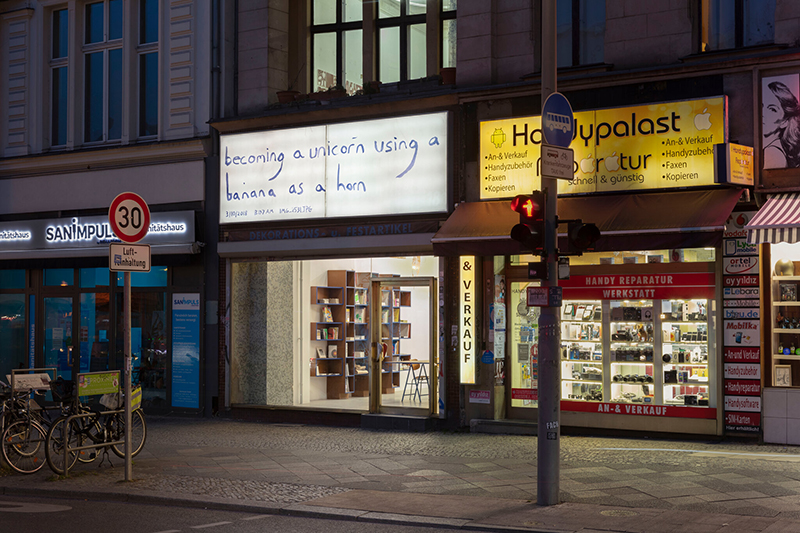 An exhibition of the same title can be found in the very back of the gallery, in Bungalow, another project space of ChertLüdde. There, I meet Rosales, a young artist who happens to be visiting from Paris together with her father. My favourites in her show are the colourful bags entitled ‘They ask to stay’ (2021/2022). The bags, made of seed beads, contain bananas, but not the ones that you can use to become a mythical creature but rather for evoking the monsters of capitalism. They are grey, made of what seems to be heavy concrete. But the artist laughs: ’Everything is empty inside,’ and to show me, she then lifts them up with ease. Though these bananas might deceive in their appearances, the weight of their stories is very real. 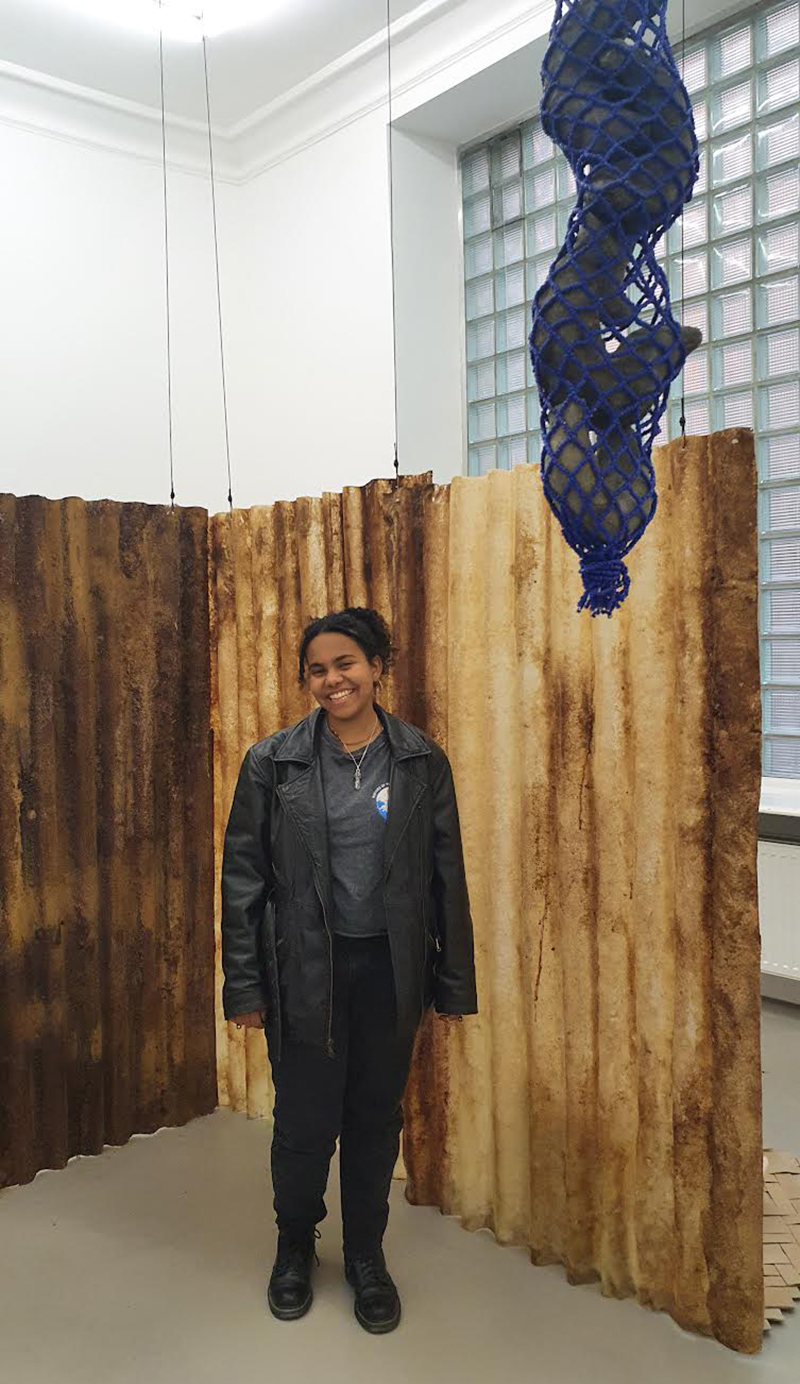