One of the best damn interviews I’ve ever done, Javier Peres holds nothing back in this one. From his humble roots in San Francisco to his meteoric rise in Los Angeles, then to Athens and now with his two spaces in Berlin, Peres tells all. Eroticism, El Greco, Warhol auction shenanigans, Bruce LaBruce, gay zombies, the new German plague, old ladies and poppers, you name it, we talked about it. 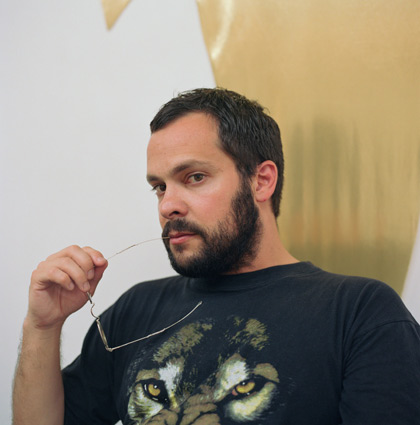 Javier S. Peres (b. Cuba) is a contemporary art dealer who operates Peres Projects in Berlin. He previously had locations in Los Angeles, California; Athens, Greece; and a project space in New York which he operated in conjunction with Terence KOH named Asia Song Society.

Peres came to prominence showing seminal early work by Terence Koh, Assume Vivid Astro Focus, Dan Colen, Dash Snow, Agathe Snow, Kirstine Roepstorff, Amie Dicke, Matt Greene, Bruce LaBruce and others in the early 2000’s. His influence as a gallerist and critical tastemaker has been validated by the inclusion of his artists in the top art world exhibitions such as the Venice Biennale, the Whitney Biennial, the Tate Triennial, the Turner Prize, the Sao Paolo Biennal, the Royal Academy of Art in London and numbers other prestigious venues. Works of Peres artists are also included in top public collections such as the Tate, London; The Whitney Museum of American Art; The Guggenheim; the Museum of Modern Art, NY, the Museum of Contemporary Art, Los Angeles; The Armand Hammer Museum, to name a few.

In 2003, Peres exhibited the work of Terence Koh (formerly asianpunkboy) in Los Angeles in a show titled “The Whole Family.” This exhibition, which later traveled to the 2004 Whitney Biennial, is an early example of the mark of Peres on the contemporary art world, making unconventional choices and maintaining a role as a relationship gallerist with unorthodox connections to the stable of artists he represents. This spring he is presented James Franco’s debut solo European gallery exhibition in Berlin.

Peres was the cover article in Art Review (May 2006), and has been ranked in Art-Review’s top 100. Both Peres, and his stable of internationally renowned artists have been staples of the top art publications around the world since his entering the art scene in 2002.

Zefrey Throwell is an artist living and working in New York City. Investigating honest communication, in all its varied plumage, is his aim. Working with video, radio, painting and people he is exploring the connecting points and underpinnings of social discourse. He is a member of three collectives: Throwhite, Red76 and Cameracartell. In addition he co-directs a gallery called Engineer’s Office Gallery in the heart of Rockefeller Center. Zefrey works with Gallery 138 in New York and is a regular contributing member to Art International Radio and was recently included in the 2007 and 2009 Venice Biennale, has had recent performances at the Whitney Museum of American Art (2010), Queens Museum of Art (2010), the Guggenheim Museum in New York (2009), Studio Museum in New York (2009) and projects at Werkstatt der Kulturen in Berlin (2010) and Photo Miami (2009). He has work in the Museum of Modern Art collection as well as the Hall collection.
frankprattle.com