WalkAbout: the World as Image, Imagination, and Idea is a new series by artist and writer Barbara Confino. A leisurely inquiry into the interplay between the real and the fantastic, each WalkAbout takes place at the crossroads of the mind and the world at large. 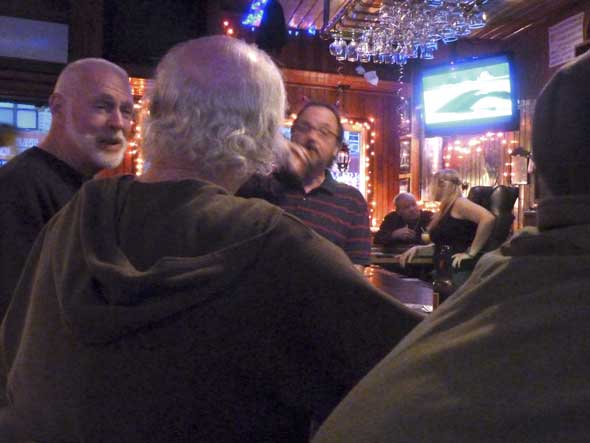 What drove me there was loneliness. I knew no one in this far away neighborhood. My new place had effectively exiled me from friends who were more centrally located, and since I typically worked alone all day, I was hungry for company.

A dark old timey bar often passed on the way home, the Full Moon was the kind of working class place that had vanished from my previous, far more gentrified neighborhood. A little scary, a little deadbeat, a few questionable characters lurking in its doorway, I had eyed it for months before daring to go in.

Then one day I did. No one said a thing. They stared outright then looked away. This was a place where everyone had had their name etched on a bar stool from birth: side tables were for sissies. Surprisingly, a very nice barkeep asks me what I want to drink. I order a glass of wine and just watch, taking in everything. The foam dripping from the beers, the arguments about sports, the surprising sentiment. In the back is a dartboard, television screens are strewn about like wallpaper, betting tables are tacked to the walls, and a stuffed wolf, yellow light shining down on him, overseeing it all.

In one corner of the bar, Dapper Harry, Spacey Tommy, Nasty George, and Shell-shocked Paul drink their beer and croon old rock and roll songs. They sing along to Bobby Vinton and early Beatles, punctuating their exertions with regular trips to the toilet where they pump out the beer.

Thrilled that I have actually come in, but too excited to stay long, I leave after that one glass. On the way out, Bobby the barkeep calls out Good Night. 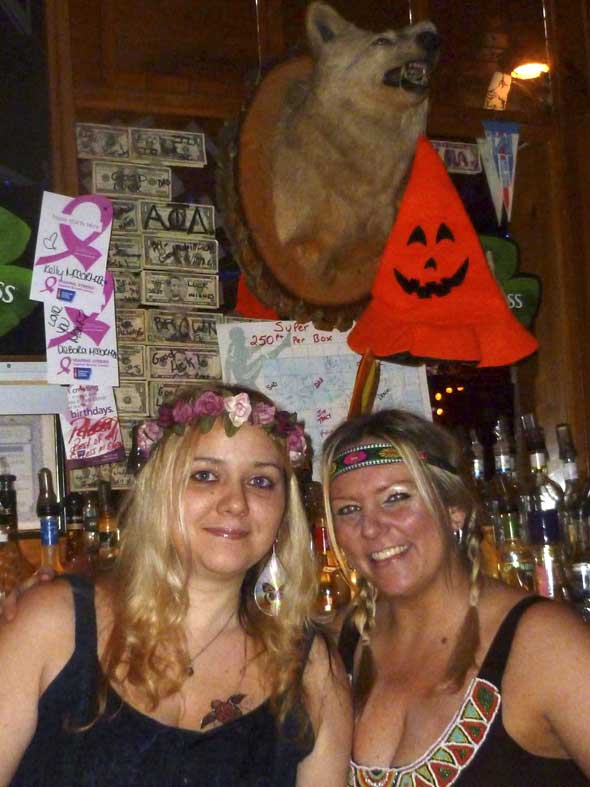 Overweight bargirls and big-bellied bikers confront me the next time I come in. One of the crooners sees me and nods. The loud voice and even louder laugh of the bargirl dominates the space; she scares me at first, but then I ask her if she has ever done theater and, of course, she has. An ex show biz dancer who seems immense behind the bar but surprisingly small when spotted later on the street grabbing a smoke, she needs the right stage, and the Full Moon is hers. Now she takes a liking to me and I relax.

To my amazement I am included in a round when someone buys. I smile my thanks and introduce myself. The next time I come in, I am greeted by name. And the Full Moon officially becomes my local.

Slowly I discover a way of socializing that has gone from middle class life. At the Full Moon the undemanding chatter flows over and through me, giving me a sense of mindless well-being hard to find anywhere else. In an upscale bar, no one ever talks to anyone but their date, and to sit at the bar is to be on the make. Here people tell me their stories; I listen attentively and once that rite of passage is over we chat about nothing. Or rather the small concerns of daily life. After a half-hour or so, I leave; refreshed and ready to go back to work, having had an essential dose of conversation and laughter to speed me on my way.

Is my reception a quirk of the neighborhood, or perhaps just this bar, I wonder. Later that summer, I visit Germany and instead of going to more upscale places, I go into the first working class bar I find. The cycle duplicates itself exactly. Stares, followed by nods, followed by greetings. In no other way could I, a foreigner, possibly meet ordinary working people. They don’t travel much, they rarely go to museums or galleries or fancy restaurants; they are not particularly chic, but they are the heart of the country I am visiting.

And I learn more about working class Germany from them than anyone else. Just as I have learned more about American working class life in the Full Moon. And about the irrelevance of class to the fundamental human need for contact, a need that in America, at least, is becoming more and more neglected, so low on our list of priorities it has practically disappeared. But not quite. 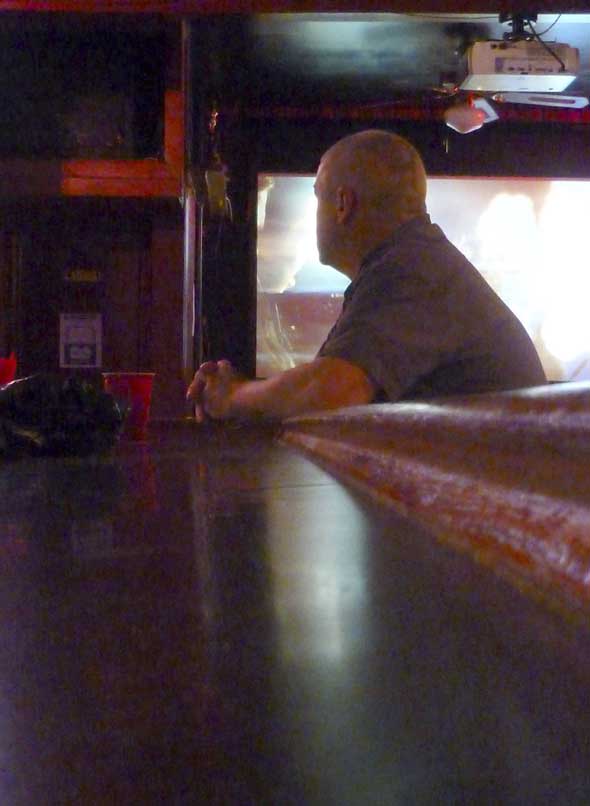 Other WalkAbouts by Barbara Confino:

Times Square WalkAbout: The adoration of the Faithful

Brooklyn WalkAbout: The Back Yards of Bay Ridge

Text and photos by Barbara Confino in New York; Wednesday, May 15, 2013

Barbara Confino is an artist and writer based in New York City. Her work has been featured at the Brooklyn Museum and is housed in such collections as the British Museum Library, the Bibliotheque Nationale de France and the Staatsbibliothek of Berlin. She is Associate Editor of the New York Photo Review, where she reviews the current photography scene. For two years she was Artist-In-Residence at New York’s Polytechnic University and she teaches at CUNY’s New York City College of Technology. Her installation, the Genetic Wars, can be seen at www.thegeneticwars.com. Further writings of Barbara Confino can be found at perceptionsinpassing.com