The group exhibition ‘Put a Sock in it!’—curated by Lisa Long at Galerie Sophie Tappeiner in Vienna—is a steeplechase where our thoughts stumble and roll, coming out shaken, stripped and ridiculed, like in a television comic sketch. It is not only the topics of power, hierarchy, sexuality and ethics that are exposed by the spotlight of comedy—this year’s ‘curated by’ festival theme, proposed to the curators invited by the participating galleries. Our critical thinking is put to the test and becomes the target of the bitter humor of the artists on display: Zuzanna Czebatul, Jesse Darling, Reba Maybury, Ebecho Muslimova, Liesl Raff and Melanie Jame Wolf. Before even entering the gallery, we are forced to clean our shoes on a doormat with the inscription ‘Patriarchy’ on it, a domestic ritual that, above those words, takes on a social significance. The work is ‘Dirty Boots’ (2020) by Zuzanna Czebatul: her funny, disarming doormat invites us to literally break free from that inherited dirt that has remained stuck under our shoes. 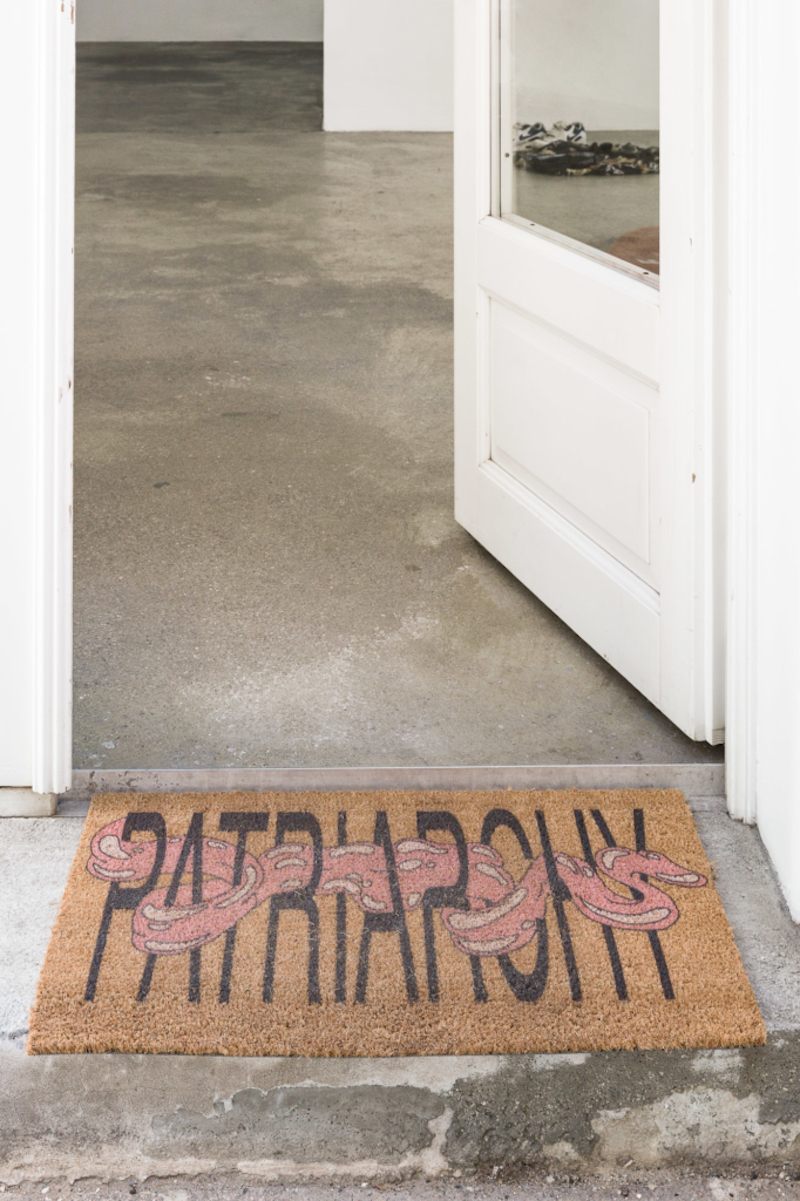 We therefore enter the gallery with a liberating smile but attentive pace, and Czebatul’s message is immediately amplified by Reba Maybury’s installation ‘Used Men’ (2021): piles of clothes are disseminated around the main hall of the gallery. Yet, they don’t seem messy, but rather docile and harmless. In fact, these are the clothes of the men that the Berlin-based artist, who also works as a mistress, has undressed in the gallery space. What we see therefore are the remains of a strong power dynamic: the gesture of making men undress and present their clothes on the ground makes us reflect on the fact that nudity can be sensual, or tragic, or ridiculous, depending on how it is created. Each of us has control over this. In front of a naked body we can feel attraction, pity or hilarity, and this does not depend on how the body looks, but on how the nakedness occurred, from what actions and in what context. In this case, it originates from a gesture of power play. We walk among these clothes, staring at them from above, and we understand that changes of perspective can trigger a turnaround of the status quo. 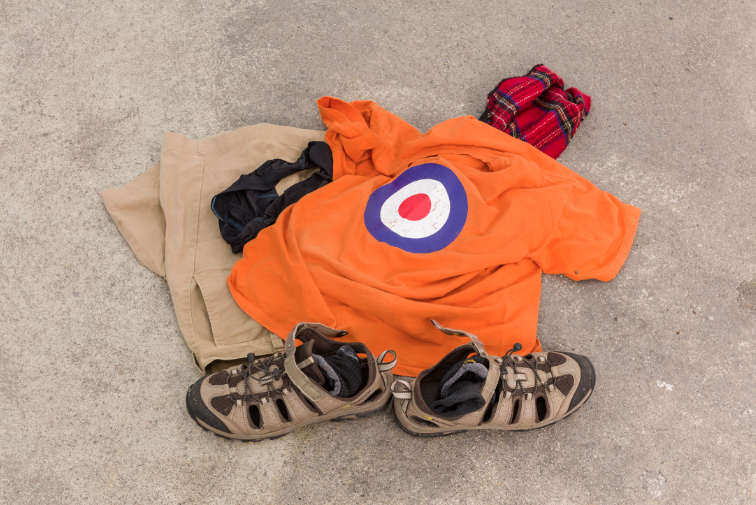 Laughter has always been political. Comedy, even when it manifests itself in the form of a joke, is emblematic of a person’s system of representation. Faced with the infamous vulgar, sexist and racist jokes of former Italian Prime Minister Berlusconi on television, there were those who laughed delightedly and those who were indignant: a joke has the ability to scan a system and reveal hidden hierarchies. Who are the jesters today? What does comedy reveal and what does it hide? Erasmus of Rotterdam examined the relationship between the leader and the jester and wrote that by means of humor, the latter can say what for others is unspeakable. The comedian protects the king from the risk of appearing politically incorrect, but he also becomes a target himself and is constantly controlled. 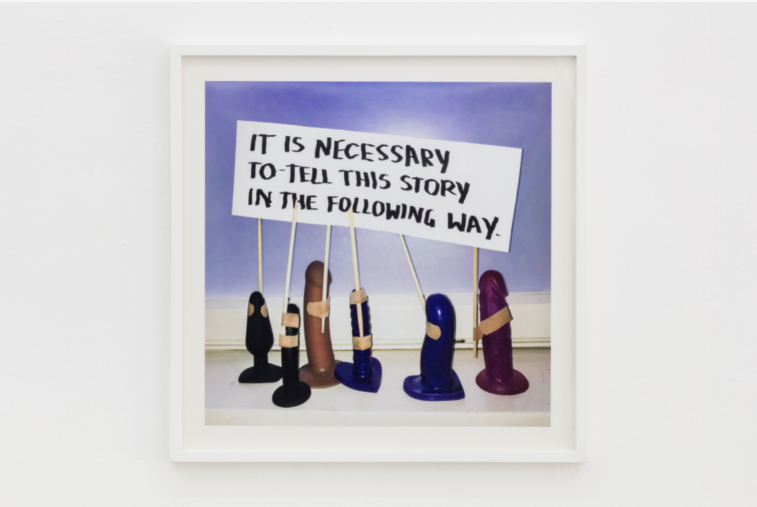 A sense of rebellion and revolution also unfolds in Liesl Raff’s ‘Liaisons’ (2021), a sculpture of long latex fringes hanging from the ceiling and crawling along the floor, freely. Perhaps it is precisely through the latex that a discourse on freedom of expression develops: the sex toys evoked in ‘Used Men’ and ‘Demonstration of an Order’ seem to have melted down and been set free, like long arms that extend throughout the exhibition space. 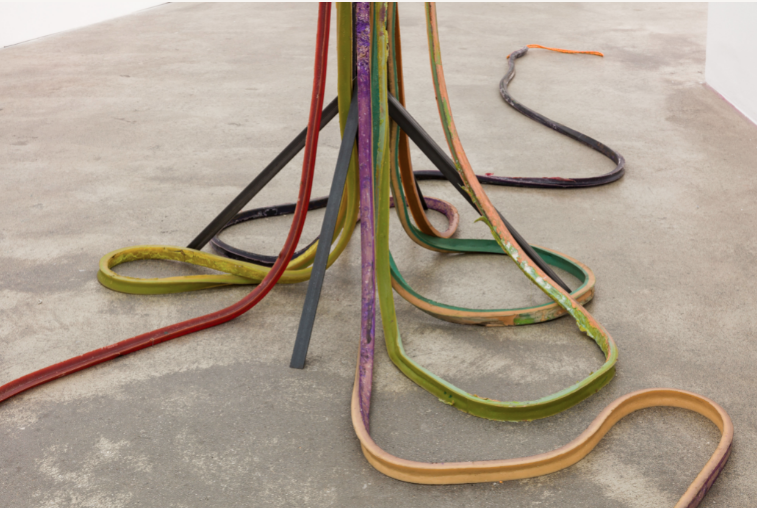 Ebecho Muslimova’s character ‘Fatebe’ (Drawing 6, 2018) is like a mischievous teenager: she shows her naked body in the most disparate positions and actions, regardless of the gaze of others, because her gaze is only turned to her own body, and that’s all she cares about. This is how comedy in life should be: freed from the judgment of the public and focused on listening to our body. The drawing on display shows Fatebe listening to her own vagina with a tin can telephone: her shocked gaze makes us think that she did not expect to hear what she has heard. Muslimova’s mischief is an end in itself, but rather invites introspection. 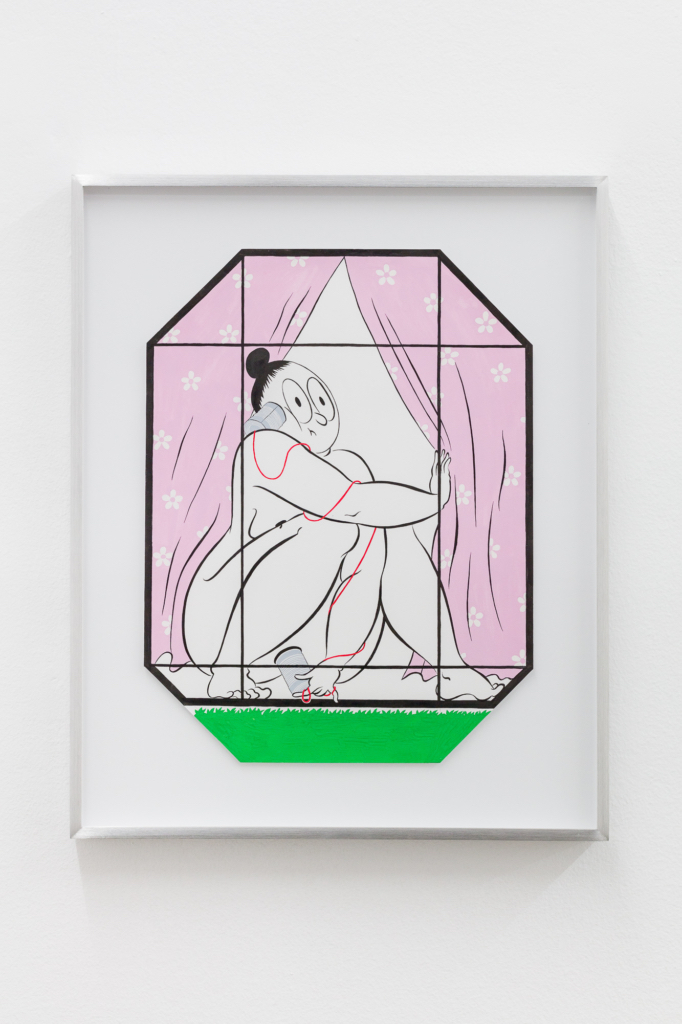 Finally, the black-and-white, two-channel video installation ‘Acts of Improbable Genius’ (2021) by Melanie Jame Wolf explores the libidinal economy of comedy. The video, installed in the basement, is the final act of the comedy that had developed upstairs in the gallery. The artist splits into two characters, Stand Up Ron and Pierrot, whom Wolf defines as “two ghosts of white male comedy.” They mimic, with their faces, a monologue in which the artist analyzes the intrinsic systems of comedy, according to which some things are considered funny and some are not. This depends on several factors, including, first and foremost, who is uttering the lines. ‘Acts of Improbable Genius’ operates in relation to class, gender, race, and questions who has permission to be funny, to speak up. 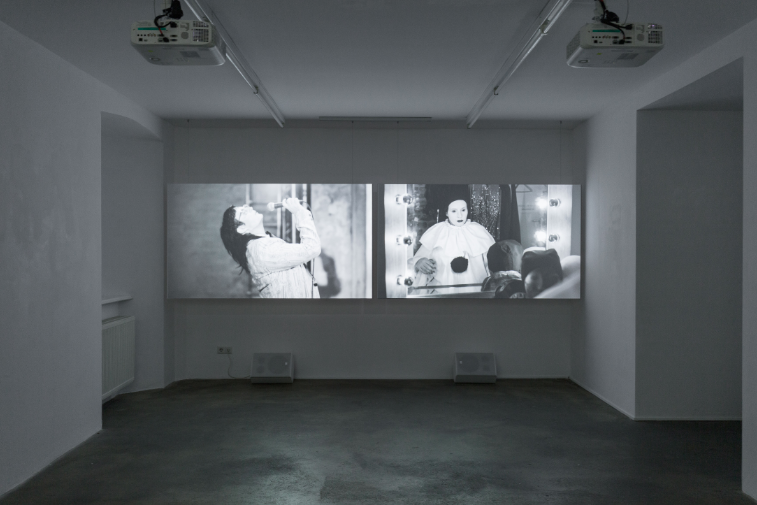 The curator’s intent, which is to unapologetically unveil the relationship between comedy, power, ethics, and sexuality within hierarchies that we experience everyday, proves potent. The essence of our everyday social comedy bitingly unfolds through the gallery’s rooms, highlighting hierarchies underneath the contemporary definitions of funny, acceptable or humorless. ‘Put a Sock in it!’ is an exhibition that forces our gaze in unconventional angles, in order to observe the dynamics of coercion from the stage of the show.