Somatics is a field within bodywork and movement studies that centers the body as perceived from within. Widely practiced in psychotherapy, dance, spiritual practices and other realms, somatics focusses on internal sensations as they are expressed through the physical. Starting this month and running throughout November, The Institute for Endotic Research (TIER) and dance curator Elena Basteri have initiated the transdisciplinary project ‘Somatic Charting. The House is the Body,’ which will present a series of performative encounters and workshops around the theme of somatics, from multiple perspectives. The participating artists make references to issues related to migration, post-colonialism, gender and ecology, and the series is inspired by the idea of a studio visit and proposes formats that combine practice, theory and aesthetic experience. 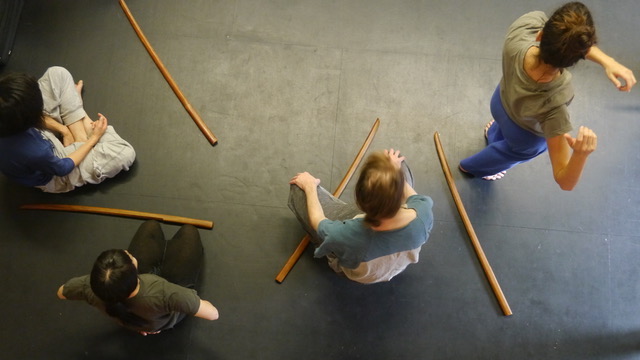 Moments from the Open Practice Sessions with Isabelle Schad, 2019 // Photo by Elena Basteri

Among the participating artists, dancer and choreographer Isabelle Schad will kick off the series at Tanzhalle Wiesenburg with ‘Perceiving the Whole. Propositions from a Practice’ on October 8th and 9th. Throughout the month, TIER in Neukölln will play host to several workshops and performances, including Sergio Zevallos‘ ‘Le Code Blanc (The White Code) A Granular Audition’—a one-to-one encounter based on the book ‘Le Code Noir (The Black Code)’ and other related texts and songs. The conceptual reversal of the project title indicates the intention to play with the postulates of the code as a study in discourse transmutation. Luiza Prado de O. Martins‘ presents ‘Notes to the Seer,’ an ongoing series in which participants are invited to taste a number of edible plants associated with herbal contraceptive medicine. Toward the end of the month, Monilola Olayemi Ilupeju will offer her performative writing workshop ‘Reading the Body’ at Tanzhalle Wiesenburg, in which select participants are invited to develop new and pre-existing pieces of writing with themes related to body image, mental health, identity and desire.

In November, program highlights at TIER include Melanie Jame Wolf‘s ‘Embodied Scenes (for a stage you’re going thru),’ which will take place over three days and will introduce her current research into “cinematic somatics.” Analysing how time and space behave differently between the two distinct formal systems of the stage and the screen, the workshop will use experimental strategies to play with and practice possibilities for staging fantastic embodiments and rehearsing fluid subjectivities and persona as critical artistic materials. In Susan Ploetz’s three LARPs (Live Action Role Plays) over three days, participants will explore a variety of embodied extra-sensory techniques inside the fictional framing of a speculative institution called PSY-SOMA-TEK, using techniques of telepathic drawing, embodied remote viewing, spatial mnemonics and somatic narration. Margrét Sara Guðjónsdóttir’s ‘Full Drop into the Body’ creates a choreographic platform for the examination of the antihero; the burned-out self; the overexposed; the imploding; the alienated; the isolated and marginalized private pathological body. During this three-day sharing, participants will be invited to do the practice themselves, and afterwards to engage in conceptual discussion.

Nathalie Anguezomo Mba Bikoro will also offer the workshop ‘Rasha Will Dismantle the Master’s House: Revolt in the Archives,’ which will develop a collective performing ritual by retracing archival erasures as forms for possible revolt and interactions through creative well-being, structuring performative memory and image exercises of counter-narratives and responses to empower Black women* narratives, transform the functionality of archival practice and develop collaborative exchange through performing sonic intervention. The workshop prioritizes BIPOC participants and will take place both at TIER and at the Tiny Temple inside the Free State of Barackia village in Kunstquartier Bethanien with International Women* Space. On November 23rd and 24th, Valentina Desideri & Denise Ferreira da Silva will present ‘Sensing Salon,’ in which they will gather for two days at TIER around the study of the body, questioning the givenness of its function, of the ways it is described and the practices through which it can be supposedly known and experienced.

The workshop program is rounded off with Island Songs (Silvia Ploner & Nicolas Perret)’s ‘One Million Agendas’ at Tanzhalle Wiesenburg, shaped around ‘The Forest Within – Within the Forest’ by Islands Songs—a sound project featuring a conversation in-between a human and a microbe that explores how knowledge about microbiology can be found encoded in Amerindian narratives and understanding of the natural world. 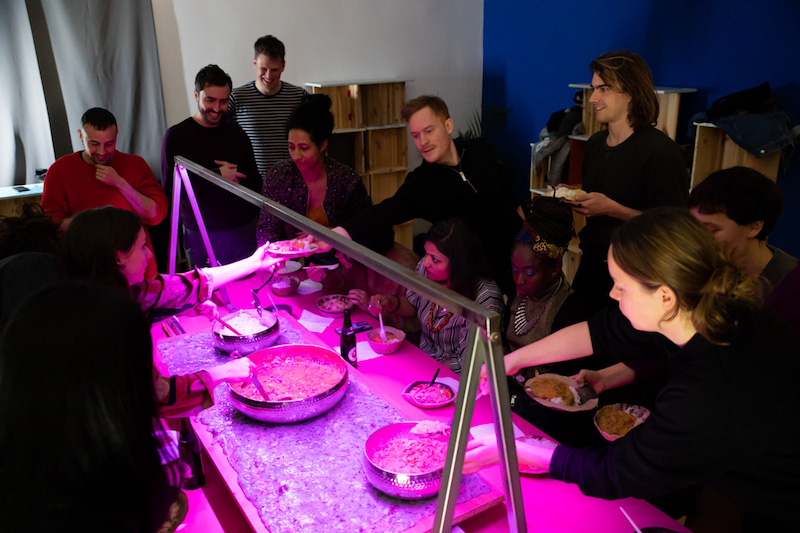 Luiza Prado de O. Martins: ‘Between The Beginning of Sense and The Chaos of Feeling: A Multispecies Banquet,’ 2019 // Photo by Benjamin T. Busch

The ‘Somatic Charting’ series—which is presented in cooperation with the Institut für Tanzwissenschaft at the Freie Universität and the Tanzhalle Wiesenburg in Wedding—will then culminate with an installation of the works in the space at TIER in Neukölln, open to the public on December 1st. You can find the full program at the link below, and most of the workshops and performance encounters require pre-registration via email to somaticcharting@gmail.com. Don’t miss your chance to join this promising series!