Artist and writer Barbara Confino’s new series, Walkabout: The World as Image, Imagination, and Idea, is a leisurely inquiry into the interplay between the real and the fantastic, each WalkAbout taking place at the crossroads of the mind and the world at large. 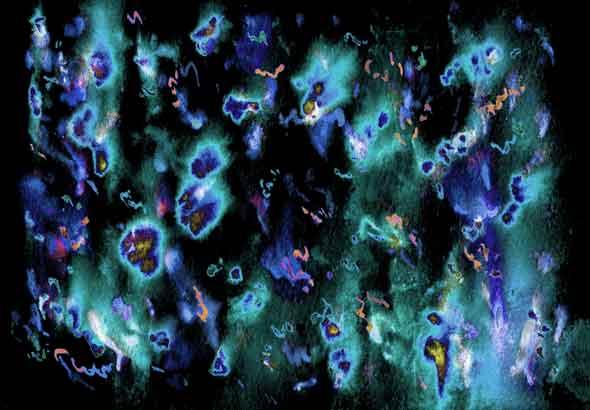 An object that absorbs all light is invisible. Suppose that object a conscious creature. If the molecular bonds of that object were somehow loosened, the object would to go from a solid to a gaseous state, its essential nature profoundly changed. Now, instead of a conscious solid object, you would have a conscious gas.

This, Dear Reader, is the story of the gods. 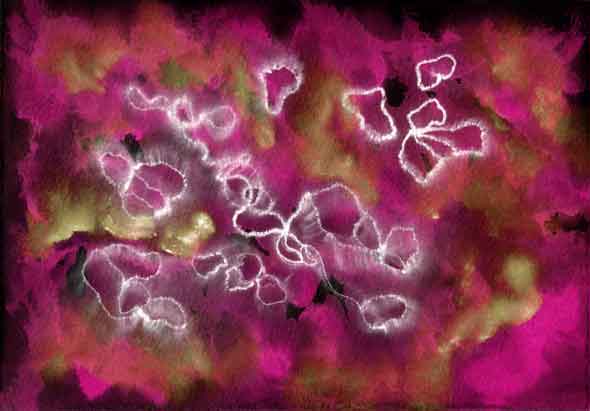 In fact some might say the gods are nothing more than hot air, though I might not necessarily concur. Certainly it is true they exude plenty of stoked up ego alongside a generally inflated idea of their own importance. With little gravitational downward pull, they constantly expand. Perhaps this is what contributes most to their misbegotten idea of the deference due them. Constantly jostling one another for space, staking out their territories with fearful intensity (until the very atmosphere is full of the sounds of belching, farting, and otherwise eruptive gaseous presences,) they are almost always to blame for strange and erratic weather patterns. Tornadoes, for example, are unrivalled evidence of a deity in a royal snit. Though low pressure systems sometimes force them to ground, generally they like to say high up in the ozone where they can look down on their assorted human flocks and feel superior. 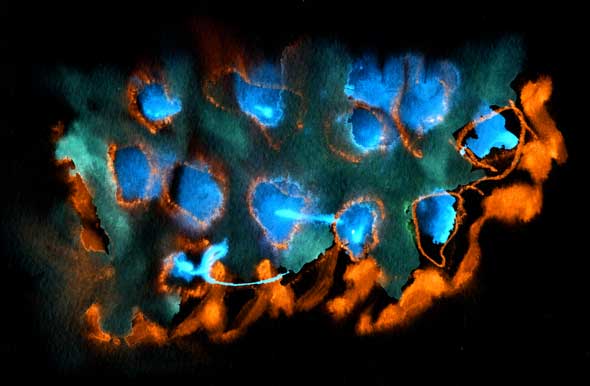 Periodically one or another of them will go to a lot of trouble to get themselves institutionalized. An institutionalized deity has certain advantages over his free lancing brethren. For one it could charge the equivalent of taxes. Prayer being a negotiation it is only reasonable to charge a fee. Hundreds and thousands of such fees can make a deity’s fortune. Since it costs a fortune to create all those monuments, temples and mausoleums which so convince believers that their god is a mighty god, a reliable income is essential. 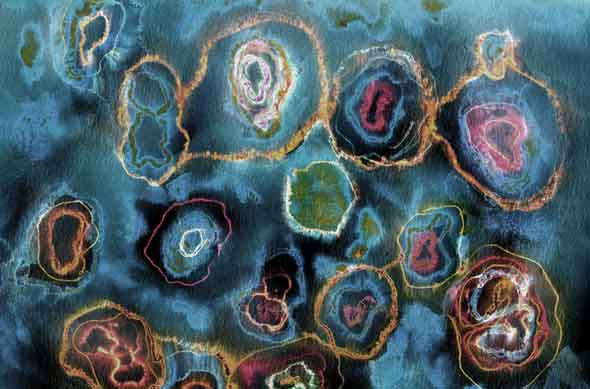 Nevertheless, personal contact with followers is problematic on many fronts, the foremost being the possibility of a direct challenge. Aside from minor temper tantrums creating a bit of fuss in the atmosphere, the general run of deities has no power to do much of anything besides expand (and, occasionally, contract.) Instead, most prefer to hide out in the ozone, appointing some self-important bugger their prophet in arms and general roustabout. For while an emissary might threaten this that or the other, the deity would have to deliver. Which, in fact, it can’t, as it was all show, really. Not even their most chosen prophets ever cottoned onto this, glorying as they did in all that divine attention. Instead they were continually egged on to make up more and more outlandish stories and even gorier facts with which to scare their unsuspecting followers. 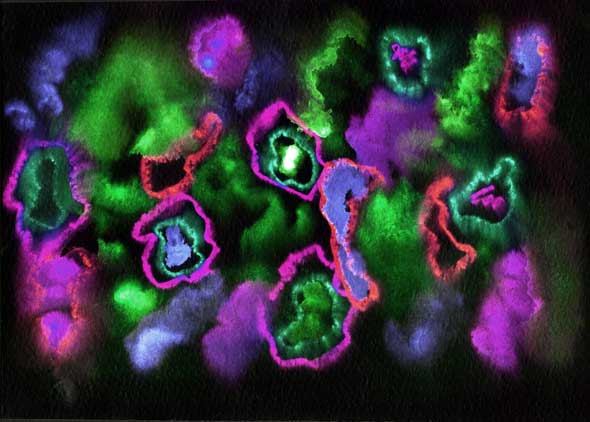 Perhaps it was the terrible nostalgia for their former solid state that lead to a maniacal insistence on being loved. (The many commentators on this sad state of affairs have all––despite their tremendous differences––agreed that such an abject need for adoration could only have come from a deep and abiding sense of loss. Anything less than total flat out worship was insufficient to heal such a wound.)

A longing for lost innocence, typical of most religious texts, came from this abiding sense of absence, this endemic feeling of insubstantiality among the gods. A consistent theme in holy writ, it surfaced time and again. Always, people wanted to know why. Why did we lose our innocence? And always the answer was simple: you did something bad,” you” often meaning “she”. 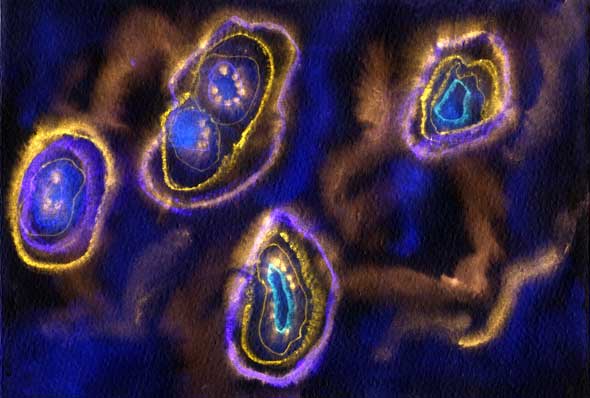 The gods counted on the weight of stuff to carry their message of supremacy and domination. Consequently people began to worship all sorts of things, from thigh bones to excrement, that could claim any connection whatsoever to the divine.

But gaseous deities prone to dissipate sometimes completely vanish into the ether leaving only their monuments behind. Still, long after the divine gas had passed from this world, and the god was dead, its people continue to worship. Oddly enough no one notices the divine absence. Or perhaps only those few to whose advantage it is to say nothing. Though the churches smelled of mold and dust, the priestly class into whose hands their operation fell continue to propagate the old stories, the old taboos. In time the church itself became deified, that which must be worshipped, the very buildings considered divine, and whatever texts have been written, various objects as well, and anything that can be palmed off as a relic. 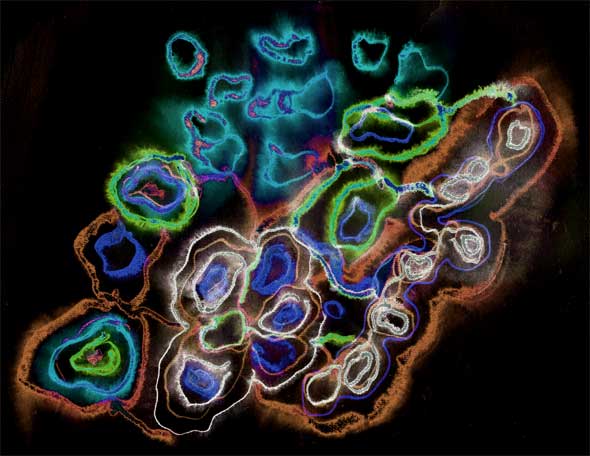 Yet with the passing of deities into the stratosphere there came a peculiar quiet, a deadness in the air where before there had been activity. More than ever it was necessary to stir up unease among the believers, to bind them in an intricate and inelastic web of rules they feared to break. And to create rigid castes and hierarchies, beginning with the subjugation of women and their purported unfitness for authority and continuing with the dreadfulness of all other forms of worship.

ALL PAINTINGS AND TEXTS BY BARBARA CONFINO Copyright © 2013 Barbara Confino

Other WalkAbouts by Barbara Confino can be found at:

Times Square WalkAbout – The Adoration of the Faithful

Brooklyn WalkAbout – The Back Yards of Bay Ridge

Barbara Confino is an artist and writer based in New York City. Her work has been featured at the Brooklyn Museum and is housed in such collections as the British Museum Library, the Bibliotheque Nationale de France and the Staatsbibliothek of Berlin. She is Associate Editor of the New York Photo Review, where she reviews the current photography scene. For two years she was Artist-In-Residence at New York’s Polytechnic University and she teaches at CUNY’s New York City College of Technology. Her installation, the Genetic Wars, can be seen at www.thegeneticwars.com. Further writings of Barbara Confino can be found at perceptionsinpassing.com